How the CIA stole a Soviet satellite 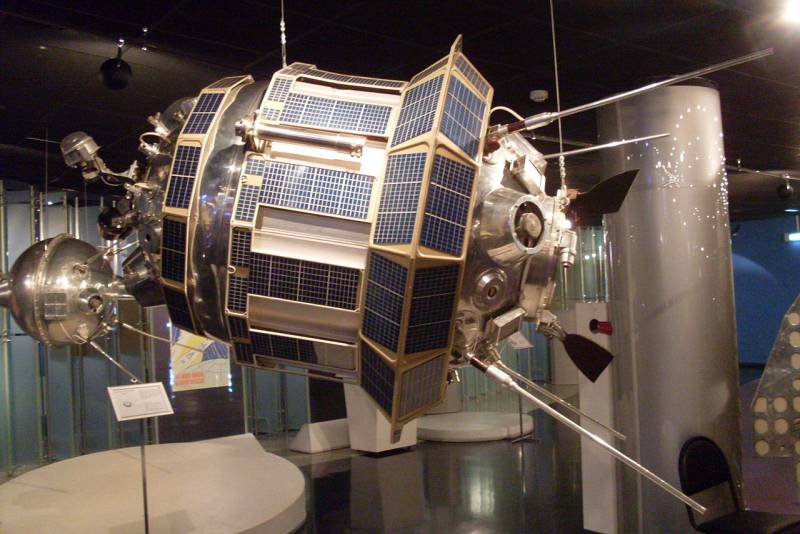 The Soviet space program made a very strong impression on the West. The launch of the first satellite, the beginning of the lunar program, the flight of the first man into space made many dignitaries in the United States very nervous. The Soviet Union led the space race in the late 1950s and early 1960s. This meant that Washington's potential adversary possessed more advanced missiles and technology.

The Soviet space program Luna, which is known in Western literature as Lunik, added fuel to the fire. Space launches within the framework of this program were carried out by the USSR from 1958 to 1976. The first successful launch took place in 1959. In the same year, on October 4, the automatic interplanetary station (AMS) "Luna-3" was launched, which was the first to transmit photographs of the far side of the moon to Earth. Also, within the framework of the flight of this station, for the first time in practice, a gravity assist was carried out.

It is believed that it was the success of the Luna-3 spacecraft that was the trigger that actually launched the space race between the USSR and the USA. Thanks to the success of the Soviet station, NASA and the Defense Advanced Research Projects Agency (DARPA) were created in the states, and funding for space programs and technologies was significantly increased. At the same time, American intelligence began to show particular interest in the Soviet space program and lunar satellites.

The USSR talks about its triumph to the whole world

1959 was the year of triumph for Soviet cosmonautics. The automatic interplanetary station "Luna-3" did what many could not even imagine. The station took photographs of the opposite side of the moon, invisible from Earth, these photographs became public. At the same time, the United States had no success at all in sending satellites to the Moon.

It was a blow to the national spirit and identity. The United States understood the importance of Soviet discoveries for international science, as well as for all space lovers. At the same time, Washington rightly feared that the USSR, which in those years was perceived as nothing more than an enemy, received at its disposal more advanced rocket boosters and technologies than were at the disposal of the Americans. 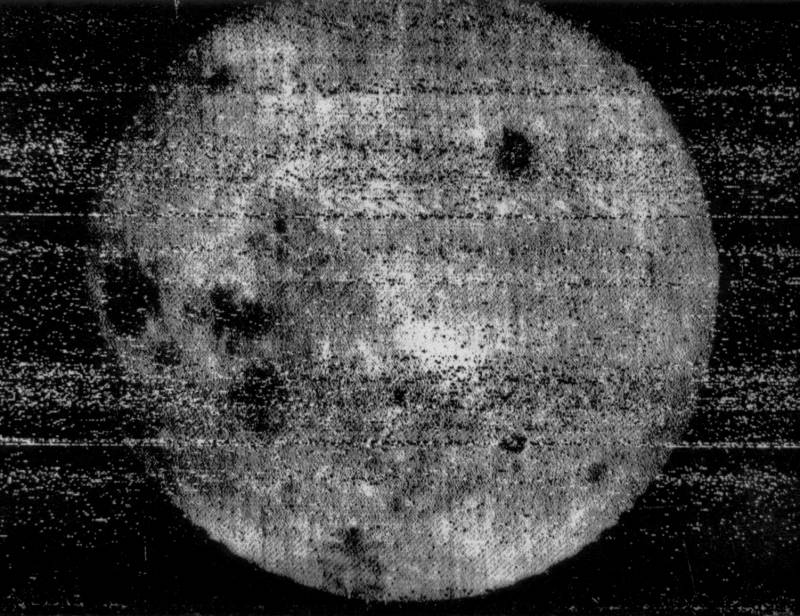 The first image of the far side of the Moon, taken by the AMS "Luna-3"
The lagging behind the United States in the space race was the reason for the creation of a special CIA program. American agents studied all possible information about the Soviet space program that they could get to. Even just the launch dates were of interest, since the United States adjusted its own launches to them in order to keep pace with the enemy.

Soviet satellites and space stations were of particular interest to the CIA, the American military and engineers. And here the Americans are just very lucky. The Soviet Union in 1958 began a large-scale program of exhibitions of achievements in science, technology and culture. In 1959, such an exhibition was held in New York, and in Moscow, in turn, a similar American exhibition was held.

The exhibitions were held by the All-Union Chamber of Commerce in accordance with the decree of the Central Committee of the CPSU of January 13, 1958. It was a large-scale program. For several years, exhibitions have been successfully held in dozens of countries around the world. Taking advantage of the general interest in the successes of the Soviet space program, Moscow decided to demonstrate to the whole world the positive image of the Soviet state by organizing exhibitions of the achievements of science and technology. In 1961 alone, the USSR organized 25 foreign exhibitions.

To the great surprise of the American side, the Soviet Union took to some exhibitions not a model, but a real sample of the automatic space station of the Luna project, albeit incomplete. Initially, the Americans believed that only models would be presented at the exhibitions. But a number of experts immediately believed that the USSR could present a real ship, as it was very proud of its space program. So in the end it happened.

Operation The Kidnapping of the Lunik

Realizing that the USSR was carrying a real lunar satellite to exhibitions, the CIA developed and carried out an operation to study it. It is only important to note that, most likely, it was a test model, albeit as close as possible to the original. This is indirectly stated in the report itself, which discloses the number of the assembled device.

An article titled The Kidnapping of the Lunik in 1967 was published in a CIA departmental magazine by Sydney Wesley Finner. Scans of this article can be found today in the archives on the NASA website. At the same time, some of the information is still classified, large chunks of text are still hidden from the eyes of readers. In the United States, material about this operation was also published in the popular science magazine Popular Science as early as 2015 with links to archival documents on the CIA's own website, but these links are currently not available. 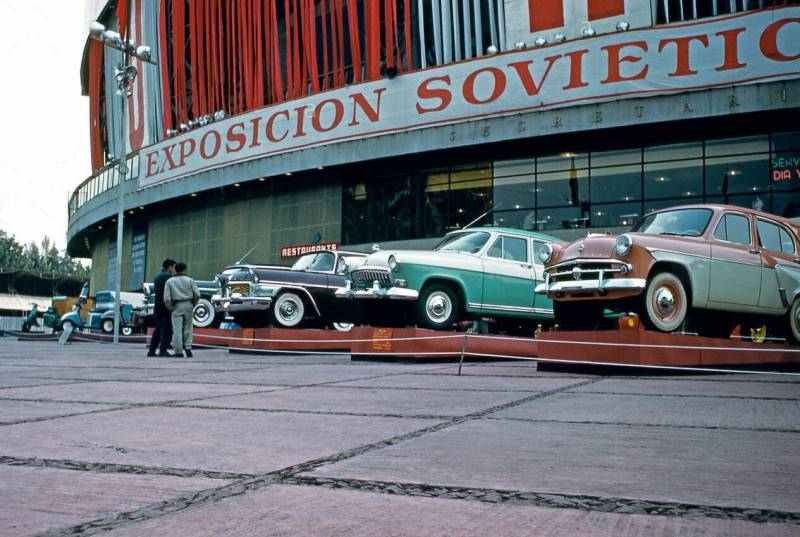 Soviet International Exhibition in Mexico City, 1959
It is not known - during their stay in which country and during which of the exhibitions, American agents gained access to the Soviet satellite. Some speculate that it could have been Mexico. The exhibition was held here from November 21 to December 15, 1959. In any case, this is not known for certain.

The Americans filmed the satellite, which they called Lunik, from all sides during a demonstration in the exhibition hall. We studied the external structure and appearance of the device, but this information was already available to all visitors of the exhibition. Much more interesting was what was inside the satellite. However, it was not so easy to get access to it, 24 hours a day, Soviet specialists were with him, who guarded the object even after the exhibition was closed for the night.

The only way to gain access to the satellite was considered by the CIA to intercept the object while it was being transported from one city to another. American agents received information about the transportations, having learned that the satellite would be taken by road to the railway station, where they would be loaded onto a carriage. The idea was to take possession of the satellite in this chain before unloading at the train station.

They planned to steal the satellite at night, disassemble it, study it, reassemble it and pack it in a box, and then deliver it to the station in the morning, hand it over to the receiving side for sending to the next city. The Americans set up so that the satellite was loaded onto a car with one of the last exhibits. After monitoring and making sure that Soviet specialists and agents were not escorting the truck, the Americans began to act.

Just in front of the train station, the truck was stopped by American agents posing as local residents. They escorted the truck driver to the hotel, and covered the truck with a tarpaulin and drove him to the nearest landfill. Having chosen this location because of the high three-meter fence, which hid the agents from prying eyes.

The released report does not say a word about how the CIA agents forced the truck driver to go to the hotel. Perhaps he was simply bribed. At the same time, it is obvious that the driver was not killed, since in the morning it was he who delivered the truck to the train before loading. Moreover, the guard at the station accepted all incoming goods, marking the boxes. But he did not have a list of goods (what is in which box), as well as the exact time of arrival of the goods. 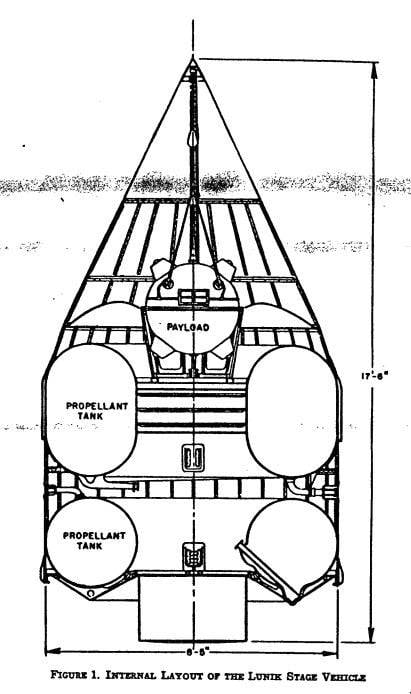 Drawing of Lunik's internal structure from a 1961 CIA report
The CIA agents did not believe in their luck. They waited for half an hour near the driven off truck, and only after making sure that no one was watching them, they started to work. In total, four people took part in the operation. They tried to remove the lid from the box so as not to leave marks on the tree. Fortunately, the box had already been opened and closed many times, so the boards were already showing signs of wear. No one would have noticed extra scratches on them.

While two people were opening the box, two other members of the group were preparing the photographic equipment. The spacecraft lay on its side in a box measuring 20 feet long, 11 feet wide and 14 feet high (approximately 6,1 x 3,35 x 4,27 m). The device occupied almost the entire space of the box, so it was difficult to move freely inside. Curiously, the report specifically notes that the agents worked inside the box wearing socks.

Having disassembled the satellite by the light of flashlights, they took plenty of pictures of the contents of the spacecraft. Although there was no engine inside, there were mounting brackets, an oxidizer tank, fuel tanks in place, which allowed experts to imagine how big and powerful it could be. After carefully examining and photographing the contents, including the electronic components inside, the American agents reassembled without taking any parts.

It is worth noting that during the work they had to unscrew about 130 square-head bolts and forge one plastic seal with a Soviet stamp. The operation, which began at 19:30, was completed by 5 a.m. when the satellite, fully assembled in a newly closed box, was placed on a truck. The driver was summoned to the scene, who drove the truck to the station, where until 7 o'clock he waited for the return of the guard, to whom he handed over the delivered box.

The report notes that the CIA does not know anything about whether they discovered in the USSR the fact that the spacecraft was seized at night and some manipulations were carried out with it. The CIA did not come across any indications of this.

Based on the results of processing the information received, the Americans established that they were in front of the sixth manufactured lunar satellite (possibly, it was the E-1A No. 6, which was never launched). The information obtained also allowed the CIA to identify three manufacturers of equipment for the Soviet space program and establish a number of other details, the value of which for the American space program remains unknown or hidden in the report.