Battle for Siberia and Russia

Vasily Ivanovich Surikov, "The Conquest of Siberia by Yermak"

The Russian statehood is being secretly eroded step by step. In Tobolsk, Russians are not allowed to name the new airport after Yermak. This is a dispute about the future of the Russian state and the people. Will we become faceless citizens of the world or will we remain Russian?

A new airport is being built in Tobolsk since 2019. The first technical flight took place in 2020. It should work from this year. The Great Names of Russia competition has started in 2018. Within its framework, the names of great compatriots are assigned to Russian airports. In March 2021, Tobolsk announced the start of a campaign to choose a name for the new air harbor. The Public Chamber of Tobolsk has proposed five names of prominent fellow countrymen for the popular vote. The final list includes the architect and cartographer Semyon Remezov, composer Alexander Alyabyev, artist Vasily Perov, poet Pyotr Ershov and ethnographer Mikhail Znamensky.

It is interesting that the ataman Ermak Timofeevich was not included in this list. This is not the first attempt to validate the list of names. In December 2020, after the first wave of indignation, Yermak was included in the list. However, now his name has disappeared again.

But this year marks 440 years since the beginning of the Siberian campaign of Ermak. Among the many great Siberians who can be called the Tobolsk airport, the leading place is occupied by the Russian Cossack, the conqueror of Siberia for the Russian state. Russian pioneers, including Yermak, unlike, for example, the Spanish conquistadors or English pirates, did not bring violence, genocide of the local population on religious, racial or ethnic grounds. On the contrary, they defended the natives from oppression and arbitrariness, strife and raids. The Russians brought a high civilization, spiritual and material culture to Siberia. The indigenous peoples of Siberia became part of the great Russian multinational civilization. Not the slaves of the Russians, not people of the second or third class, but full-fledged citizens and residents of the Russian state.

Therefore, the assertion that the assignment of the name of Yermak to Tobolsk airport “rocks the boat” has no basis in Siberia. Siberia is a Russian land inhabited mainly by Russian people. The decision must be made by the townspeople themselves. Russian people, masters of their land.

The threat of global internationalism and multiculturalism

It turns out that local officials have decided to be part of the global trend - the struggle for the rights of national, religious, sexual minorities, women, for tolerance and multiculturalism.

We see how racially motivated pogroms are taking place in the United States. Where the cops are forced to kneel before the black thugs. They are removing monuments to prominent figures of the South, the Confederates. In the States, monuments are being demolished even to Columbus and the presidents who advocated the emancipation of slaves.

This wave of struggle with its own history came to Europe. Football matches and other sporting events begin with a ritual kneeling. The United States and Europe are being deprived of their historical memory and national identity. Because the memory that is embodied in a monument, sculpture, any historical symbol is a kind of gathering point, unity, solidarization of the people. A nation, a people have places of memory, shrine and achievements. If you destroy them, then you can completely separate and separate people, and individually, almost any person can be subdued, broken. Turn into a slave to a new world order.

The destruction of the old world, civilizations, cultures, religions, races, nations and families, as the basis of the state, is taking place. The “fight for the rights” of various minorities is used as a tool of destruction. In the USA they are “colored”, first of all blacks. Since Asians and Hispanics are busy with work, they have no time to rebel. Also, various left-wing radicals, new Trotskyists, anarchists, liberals, globalists, homosexuals, etc. Propaganda of the LGBT community is a powerful tool for destroying the state and society. This happens by dismantling the principles of morality from the field of sexual and sexual relations, the elimination of a normal, traditional family. According to the plan of the designers, we should have neither a normal family, nor children, nor morality.

In Western Europe, the emphasis is on migrants, propaganda of various kinds of perversion, and the destruction of families. Tolerance and multiculturalism are implanted literally through terror. It is forbidden to say that most of the serious crimes are on the conscience of migrants. Any and frankly weak attempts of European nationalists to resist are immediately branded as fascism and Nazism. In general, this is a single process, a mechanism for the destruction and self-destruction of European civilization. Its Christianity has already been practically destroyed. The white race in general and the indigenous peoples of Europe in particular are rapidly aging and dying out. In a couple of generations, Southern Europe will become part of Muslim Asia and Africa. Northern Europe will follow.

Self-destruction of the global North

In fact, we see a consistent process of destruction and self-destruction of the global North, the white race and the indigenous peoples of Europe. Society is deprived of defense mechanisms, people now perceive the world through the prism of tolerance and multiculturalism. Society is amazed by the ideas of abandoning the family, childlessness, and the LGBT community. Suppressed by the global liberal culture, society seeks escape or adaptation. Constraint of their own rights, the rights of the owners of their land, is taken for granted.

People are taught to diminish rights and freedoms, to abandon their own culture, history, religion, language and traditions. Ultimately, to abandon one's own civilization and culture. In order to then create another world in the vacant place.

Global "Babylon", where there will be no different races and cultures, peoples and languages, religions and traditions. This is universalism in everything. This is what the adherents of the new world order are talking about. Universal culture, language, values, social relations and power, norms of behavior. For example, in Switzerland, the USA and France, dads and moms were canceled. They were replaced by the terms "parent # 1" and "parent # 2". All these are elements of a new world order.

Thus, the dispute in Tobolsk may seem insignificant, a trifle. However, this is a dispute about the future of the Russian state and the people. Will we become faceless citizens of the world? Or will we remain Russian-Rus, ready to stand up to death for our many-thousand-year-old Rod and Motherland?

There will be more further. They will find out which of the Russian generals and statesmen "oppressed" and "colonized" which peoples. Russian poets and writers will certainly find racism, anti-Semitism, etc. And soon Russia will cease to belong to the Russians. Therefore, it is necessary to give a tough rebuff to such inclinations. To preserve what is still left of Russian history, culture and language. Or they will crush us. 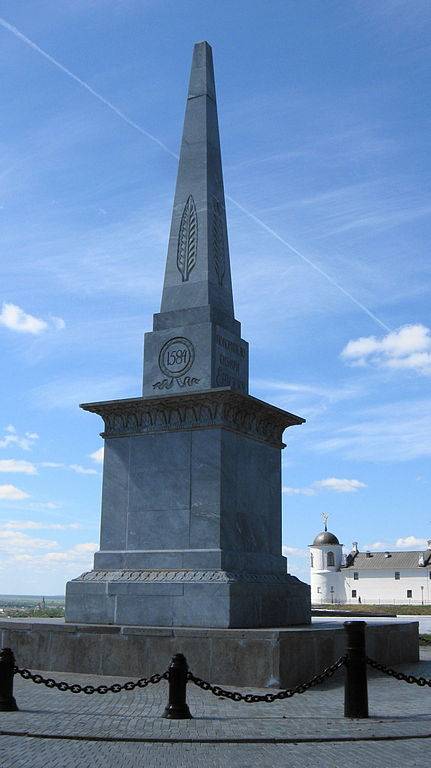 Stele to Ermak in the Garden of Ermak, Tobolsk. In the background is the wall of the Tobolsk Kremlin. The project of the monument was developed in St. Petersburg by Academician Bryullov. The opening took place in 1839

Ctrl Enter
Noticed oshЫbku Highlight text and press. Ctrl + Enter
We are
What you didn't want to know about EnglandList of destroyed the largest and most high-tech enterprises
Military Reviewin Yandex News
Military Reviewin Google News
198 comments
Information
Dear reader, to leave comments on the publication, you must sign in.