Exchange of experience in Detroit: visit of Soviet engineers to the armored production of "Ford" 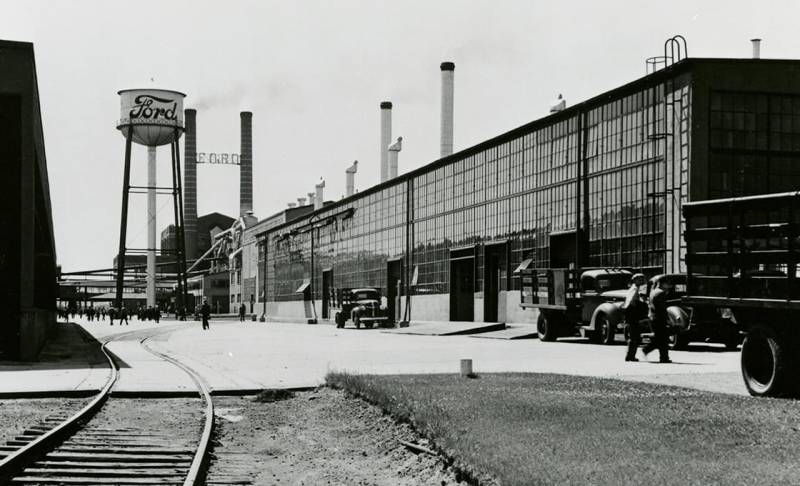 Before getting acquainted with the features of armored production at the Michigan Ford plant in Detroit (USA), it is worth briefly explaining the conditions under which the armored industry was being established in the USSR. As you know, everything is learned by comparison.

Armor production during World War II was one of the most important factors in strategic advantage. With the beginning of the war, the Soviet Union found itself in a disastrous position - all armored production was concentrated in the European part of the country. The rapid advance of the German army could completely paralyze production tank reservation in the country. Only at the cost of incredible efforts to evacuate part of the factories to the east at the beginning of the war was it possible to restore the production of armor. The main "armored factories" were Kuznetsk, Nizhny Tagil and Magnitogorsk metallurgical plants.

But the matter was not limited to a simple transfer of production to a new site behind the front line. Most of the new factories were not adapted to the smelting of tank armor - before the war, the factories worked for the needs of the People's Commissariat of Ferrous Metallurgy. Wartime has added its own adjustments. Now the open-hearth furnaces often had low-skilled workers, there was an acute problem of the lack of special thermal, pressing and metal-working equipment. Therefore, the transfer of armor production was accompanied by a serious restructuring of the technology itself for smelting military steel. So, it was necessary to adapt production to the main open-hearth furnaces for 120-180 tons, excluding the process of diffusion deoxidation. The hardening of armor plates and armor parts had to be carried out in water.

Such a simplification could not but affect the quality of the armor received. This is especially true for the most difficult to manufacture high-hardness tank steel 8C. The very first samples of armor plates on tests showed significant slate and layering of the fracture, a high tendency to crack formation during welding and straightening. In addition to this, field tests revealed the excessive fragility of the armor samples during shell fire. 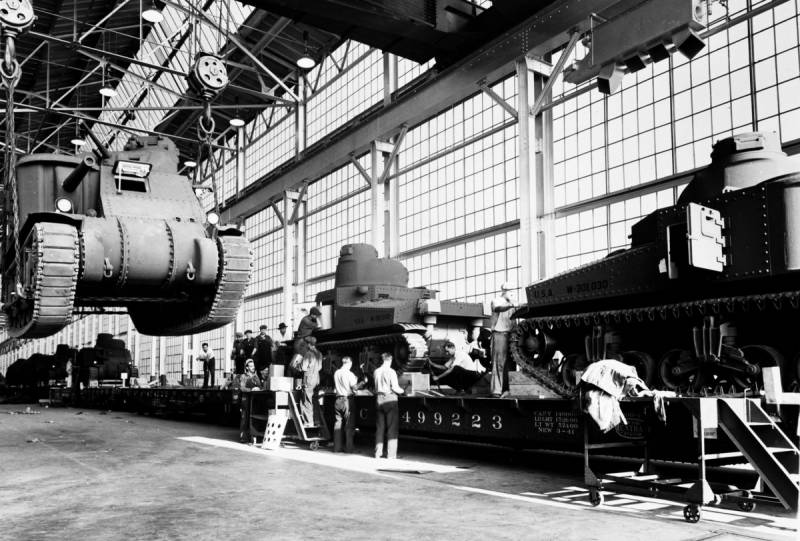 Tank production in Detroit. Source: pinteres.com
Such defects could not be ignored. And in the specialized TsNII-48, a number of improvements have been developed. First of all, from now on, armor steel was supposed to be smelted only in preheated furnaces after smelting "civil" grades of steel. The steel had to boil in the open-hearth smelting bath for at least an hour and a half, and poured into square or convex molds. In addition, metallurgists paid special attention to the sulfur content in the original pig iron (no more than 0,06%), as well as carbon and manganese. In combination with other measures, this made it possible to improve the quality of the armor. In particular, to reduce the slate and layering of the fracture.

An important problem was the technology of heat treatment of domestic armor. To put it simply, the hardening and tempering of the armor plates took too much time and energy, and the necessary equipment was lacking. It was necessary to simplify the process. In this regard, we will give a typical example. In 48, the metallurgists of TsNII-1942 managed to simplify the process of thermal preparation so much that only for parts of the bottoms of KV and T-34 tanks they saved about 3230 furnace-hours per 100 hulls. 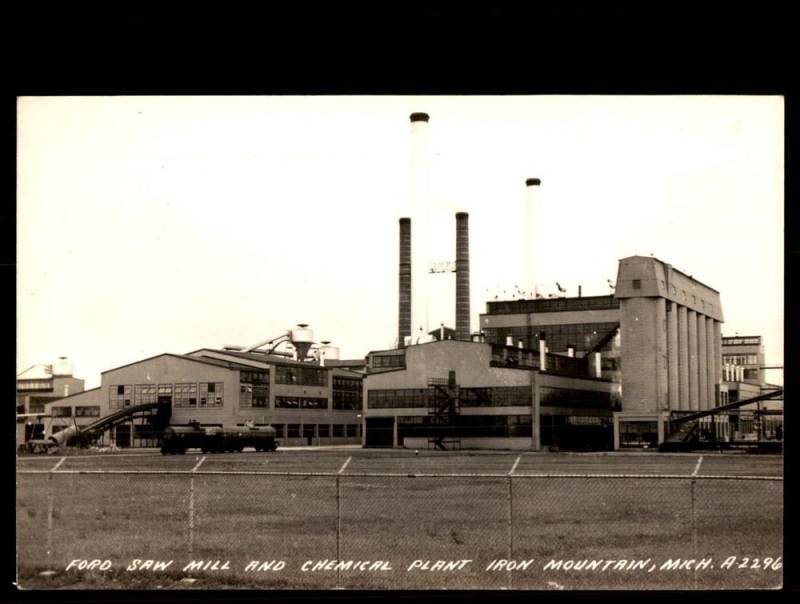 One of the factories of the Ford Motors factory empire. Source: pinteres.com
Nevertheless, until the very end of the war in the Soviet Union, the conditions for the production of strategically important tank armor were far from required. The same cannot be said about the military industry of the overseas partner, whose territory was not affected by the world war. The Soviet metallurgical engineers had to make sure of this once again on February 26, 1945, 72 days before the Victory.

Little known history Vasily Vladimirovich Zapariy, Candidate of Historical Sciences of the Institute of History and Archeology of the Ural Branch of the Russian Academy of Sciences, announced the visit by the Soviet delegation to the Ford armored factory in Detroit. The scientist's material is based on the report of Soviet metallurgists on the results of a trip to the United States stored in the Russian State Archive of Economics (RGAE). It should be noted that the RGAE is simply a treasure trove of archival documents from the era of the Great Patriotic War related to the production of military equipment and equipment. One can only guess how many more secrets the archive keeps in the secret evidence.

According to engineers who returned from Detroit, the armored workshop of the Ford plant was a building consisting of two spans measuring 273 meters in length, 30 meters in width and about 10 meters in height. At the same time, the shop did not smelt armor. It was mainly intended for heat treatment and cutting of steel. This naturally aroused particular interest among Soviet metallurgists, given the above-described problems of domestic armored production. The main production profile of the Ford Motors workshop was working with armor up to 76 mm thick. Heat-treated steel sheets were used to weld the hulls of light and medium armored vehicles at other factories in Detroit. 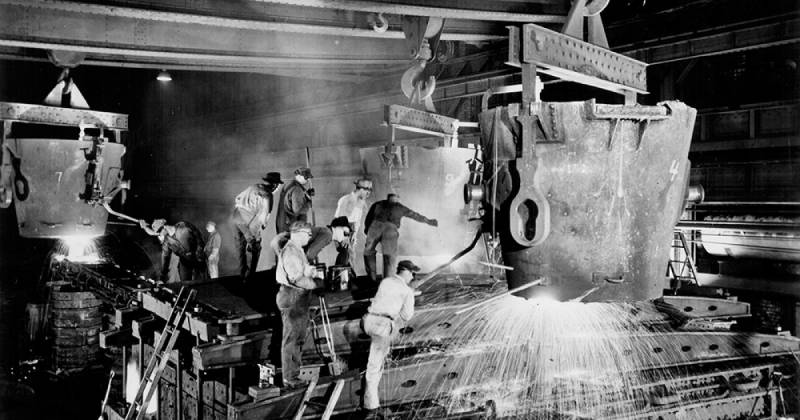 The supply to the armored shop of the Ford plant was carried out by approximately the following enterprises. Source: pbs.org
First of all, the mechanization of the production process impressed the Ford workshops. After melting and rolling, the armor plates were delivered to the heat treatment shop on hydraulic table loaders United. The loaders, in turn, took the armor from the railway platforms located near the workshop. In the workshop itself, there were two bridge cranes designed to move armor sheets during all technological operations, with the exception of hardening processes.

To create the necessary crystalline structure of the armor, two presses, with an effort of 2500 tons each, five 70-meter continuous method furnaces and five 100-meter gas tempering conveyor furnaces were called upon. Water was supplied to the armor hardening presses through the operation of six pumps at once, pumping more than 3700 liters per minute. As domestic engineers wrote, the complexity and cost of the design of such presses, capable of simultaneously stamping and cooling red-hot armor, were prohibitive. At the same time, there were doubts about the advisability of using presses for armor with a thickness of 30–76 mm. Here, the intensity of water supply for cooling came to the fore. 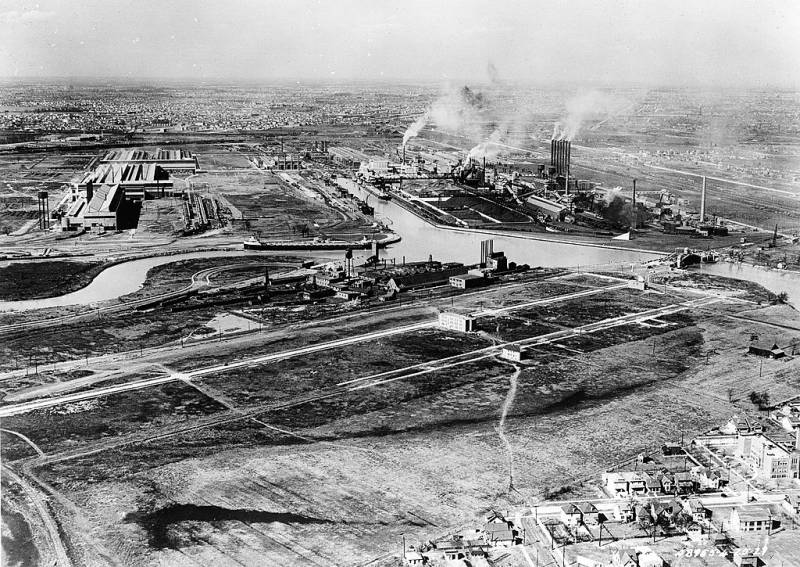 The Ford factory complex in Detroit. Photo of the pre-war period. Source: wikipedia.org
The 2500-ton presses weren't the only ones in the Ford armored vehicle. Toledo presses # 206 were engaged in cutting thin armor and developed a pressure of 161 tons. For armor thicker than 2,5 cm, exclusively fire cutting was used.

During a visit to the enterprise, metallurgists were able to see the process of hardening thin bulletproof armor. Under a press of 1000 tons, it stayed for 15 seconds, and then the sheet was sent for 2,5 hours for quenching at 900 degrees Celsius and for four hours of vacation at 593 degrees.

All this technical wealth was observed by Soviet engineers, not counting various "small accessories": welding machines, milling machines, scissors and the like.

The main feature of the heat treatment of the armor was the continuous flow of production. At almost all stages of processing, steel sheets were in the process of moving on roller and chain conveyors. The conveyor was controlled from a central control panel. At one of the last stages, all armor plates were inspected for the level of Brinell hardness. In this case, the fluctuation of the test parameter from sheet to sheet should be minimal - no more than 0,2 mm.

The Soviet delegation was especially interested in two shot blasting machines, which cleaned the armor plates almost after each technological operation. Such perfectionism and such a luxury could only be afforded by Americans, far from the hardships of wartime.

Ctrl Enter
Noticed oshЫbku Highlight text and press. Ctrl + Enter
We are
Diplomats of the People's Commissariat of Defense: on the eve and during the warHow Henry Ford Hitler instructed
Military Reviewin Yandex News
Military Reviewin Google News
112 comments
Information
Dear reader, to leave comments on the publication, you must sign in.