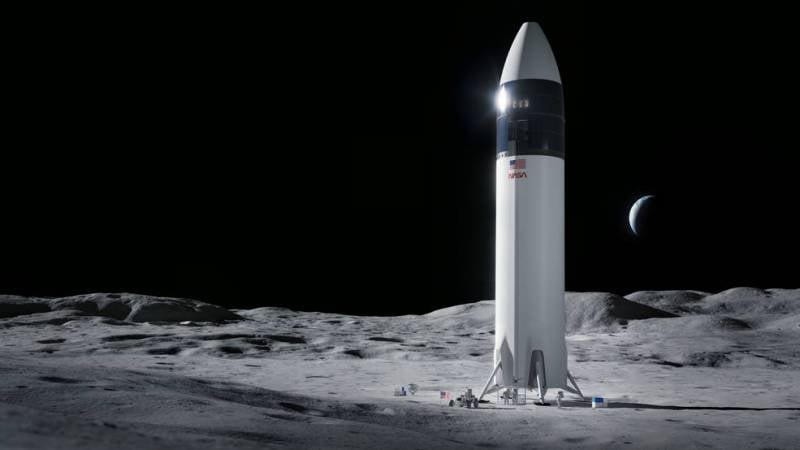 American astronauts will be delivered to the lunar surface by a lander created by Elon Musk. SpaceX won a NASA competition to develop the corresponding vehicle.


The Musk company was awarded a contract to develop a lander as part of the Artemis lunar program. SpaceX received $ 2,9 billion for the project. The contract was announced by the US National Aeronautics and Space Administration (NASA).

It is emphasized that the company Elon Musk SpaceX in the competition ahead of Jeff Bezos's Blue Origin, as well as Dynetics.

If the terms of the program are not shifted, then the Musk lander should be developed by 2024. It is for this year that American astronauts are scheduled to land on the moon. It is assumed that the Orion spacecraft with the US astronauts will arrive in orbit with an Earth satellite, after which two astronauts will go to the surface, spend a certain time there and return back. It is emphasized that one of the astronauts will be a woman.

The lunar exploration program, called "Artemis" in the United States, should be implemented in three stages: at the first stage, the Orion spacecraft will make an unmanned flight around the Moon and return to Earth, at the second stage, a manned flyby of the Earth satellite, and there, before the astronauts are launched to the Moon, not far away. ... So far, the timeline looks like this: the first stage in 2021, the second in 2022, and the third in 2024.

Russia, meanwhile, is implementing its own lunar program. According to it, the automatic station "Luna-25" will be launched to the Moon. In the future, within the framework of the lunar program, after sending the Luna-25 spacecraft, it is planned to send the Luna-2024 orbital station to the Earth's satellite in 26, and the Luna-2025 landing station in 27.