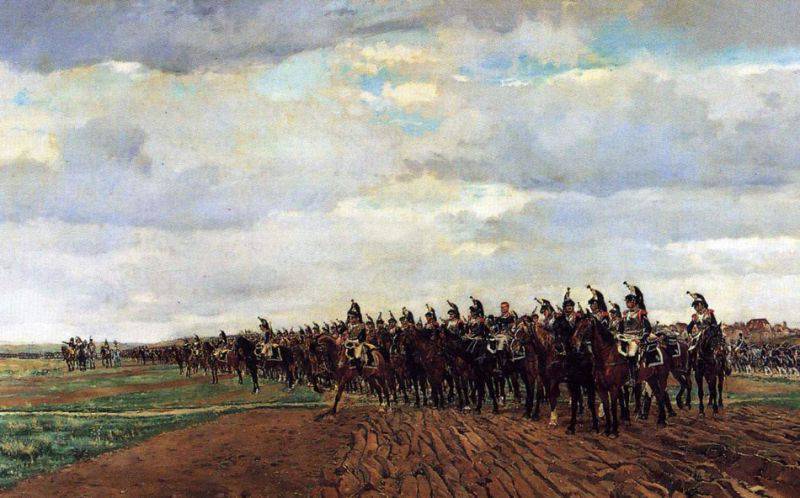 How long have your eagles flew
Over the dishonored land?
How long have kingdoms fallen
With the thunders of fatal power;
Obedient to the will of the wayward,
The banners rustled in misfortune,
And imposed a sovereign yarom
Are you on earth tribes?
(A. Pushkin "Napoleon")
Greatest battles in stories. Past material "Austerlitz: Napoleon and his troops on the eve of the battle" aroused keen interest in the VO readership, and, of course, she looks forward to continuing the description of this battle. However, at this very place we will just interrupt - in order to tell now about the uniform of the French army. And she deserves a very detailed story, especially since for many armies of the world it was she who then became an object of imitation. 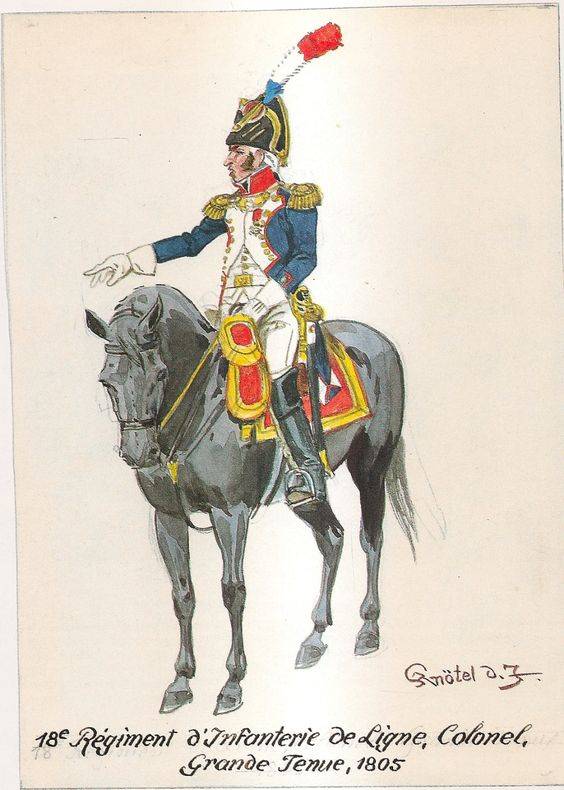 Colonel of the 18th Line Infantry Regiment of the Great Army, 1805 Richard Knötel (1857-1914)
To begin with, we note an interesting circumstance: in the middle of the 1756th century, the bulk of the French infantry, like the infantry of the Austrians, was dressed ... in white uniforms! Grenadiers, for example, from 1776 wore white caftans with grenade cuffs, fur hats, black cuffs, turn-down collars, and unbleached leather harness. From 1786 to XNUMX, they received a bicorne hat with a red pompom, a uniform with black cuffs and lapels, red shoulder straps and white belts. Colored uniforms were worn by only a few regiments. 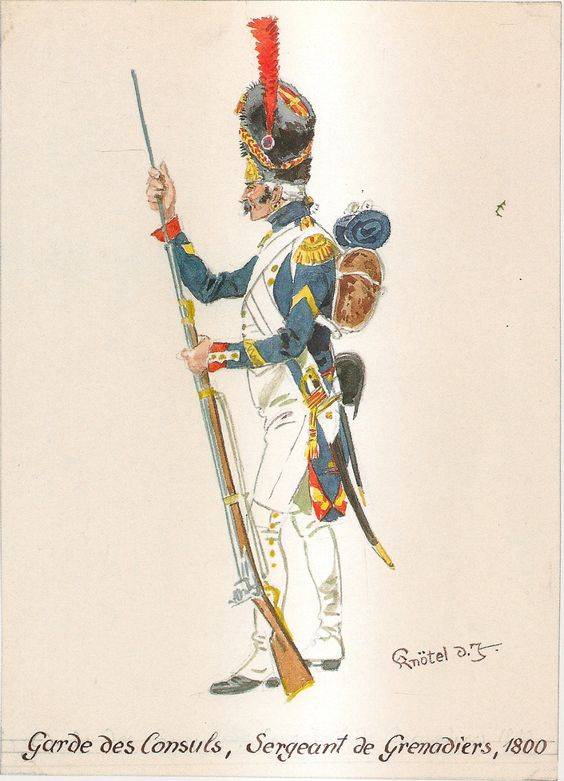 Consular Guard. Sergeant of the Grenadiers, 1800 Richard Knötel (1857-1914)
The reform of 1793 introduced a blue uniform - the so-called "French type", almost unchanged since 1786. The uniforms of all infantry soldiers became the same: fusiliers, grenadiers, and voltigeurs (that is, "skirmishers", and in fact the same huntsmen, although there were also huntsmen in the Napoleonic army) were dressed in long-length uniforms of dark blue color, as well as white vests, trousers and leggings, cut in the same way as at the end of the XNUMXth century. 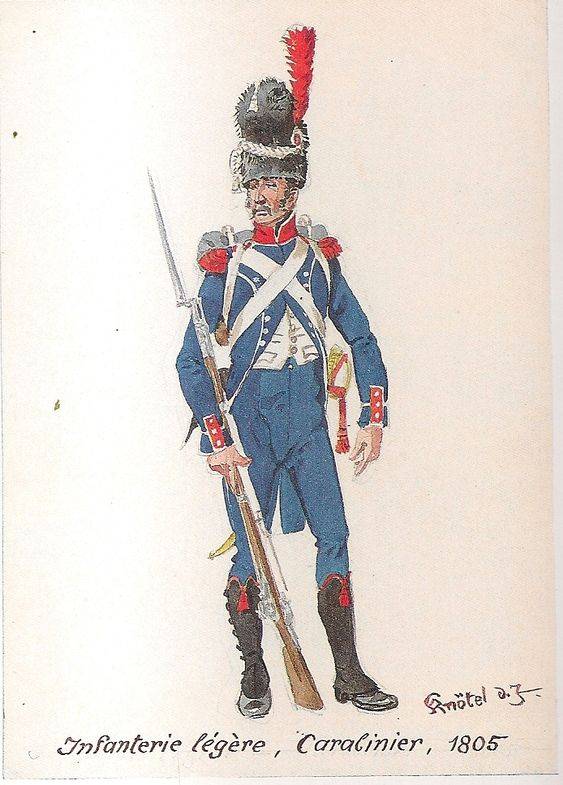 Light Infantry Carabinieri, 1805 Richard Knötel (1857-1914)
In the imperial guards infantry, the dress uniform consisted of a dark blue uniform with white lapels, red folds, blue collars and red cuffs, fastened with three buttons, covered with white linen. All this symbolized now the republican color "tricolor". High fur hats are made of bearskin or goat fur, with a brass forehead, as well as cords and a red sultan on the left. The bottom of the cap was made of cloth, red with a white galloon sewn in a cross on a cross. Hiking huntsmen with the same shape did not have a forehead, the sultan was red and green. The Italian guard had a uniform of a similar cut, but the foreheads "silver" and uniforms were green. White leggings, above the knees, with slouching in the front on the shoes and footstocks for suspenders. But, it is clear that on the battlefield, even the guards did not wear leggings with strips, but managed with long, baggy-cut trousers made of unbleached linen, which all other Napoleonic soldiers wore with a marching uniform. 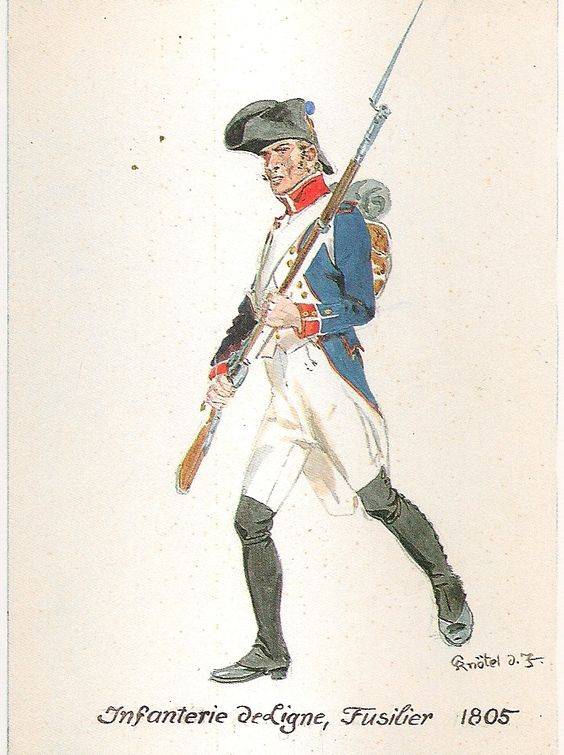 Fusiler of the Light Infantry, 1805 Richard Knötel (1857-1914)
The non-commissioned officers were distinguished by diagonal strips on the forearms. The planks with an upward angle showed the service life: 10 years - one, 10-20 - two, and more than 20 - three!

The outfit also included a cartridge bag with a wide white sling, on which the bayonet scabbard was also attached. On another sling hung a cleaver. Belt ammunition was fixed on the shoulders with epaulettes of different colors, and even with a fringe! The backpack was made of cowhide with the fur outside, the overcoat, like the Austrians, was worn by French soldiers in a roll over their shoulders. 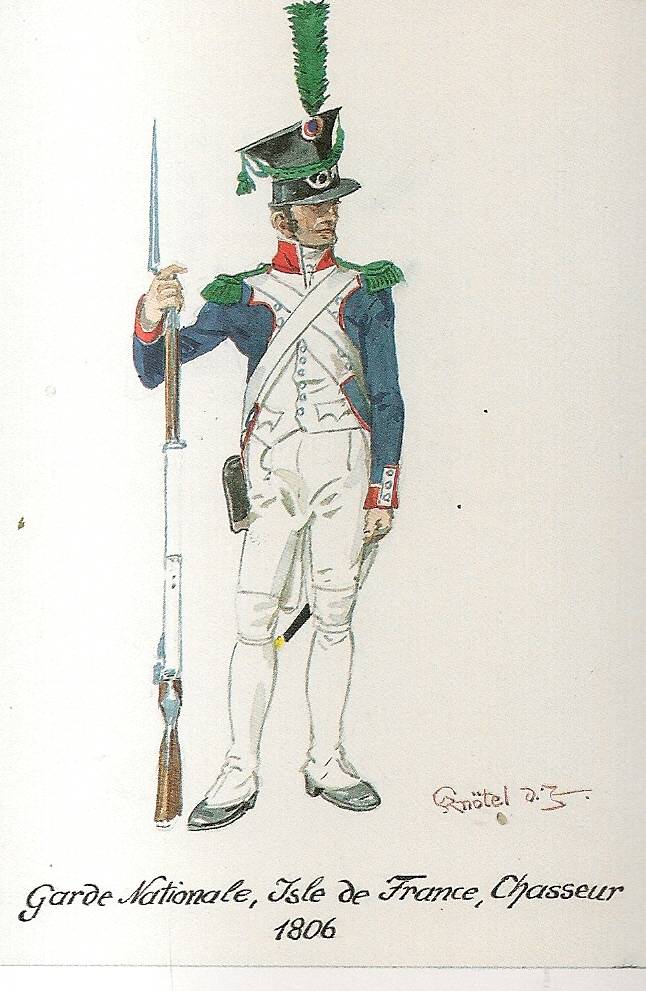 Chasseur (fr. Chasseur - "hunter", "gamekeeper") of the National Guard of Ile de France, 1806 Richard Knötel (1857-1914)
The line infantry of the French army was represented by grenadiers, again in fur hats with a red sultan on the left, blue uniforms with white lapels, red epaulettes with fringes, collars and cuffs. A grenada headband and black leggings completed the look. The grenadiers formed one of the regiment's two elite companies. Fusiliers wore bicorne hats with a red pompom and a three-color cockade, but the Voltigeurs with the same uniforms were distinguished by yellow collars, green epaulettes and yellow-green sultans on their hats. The overcoat is a gray-brown cloth with two rows of buttons with a cloth covering. 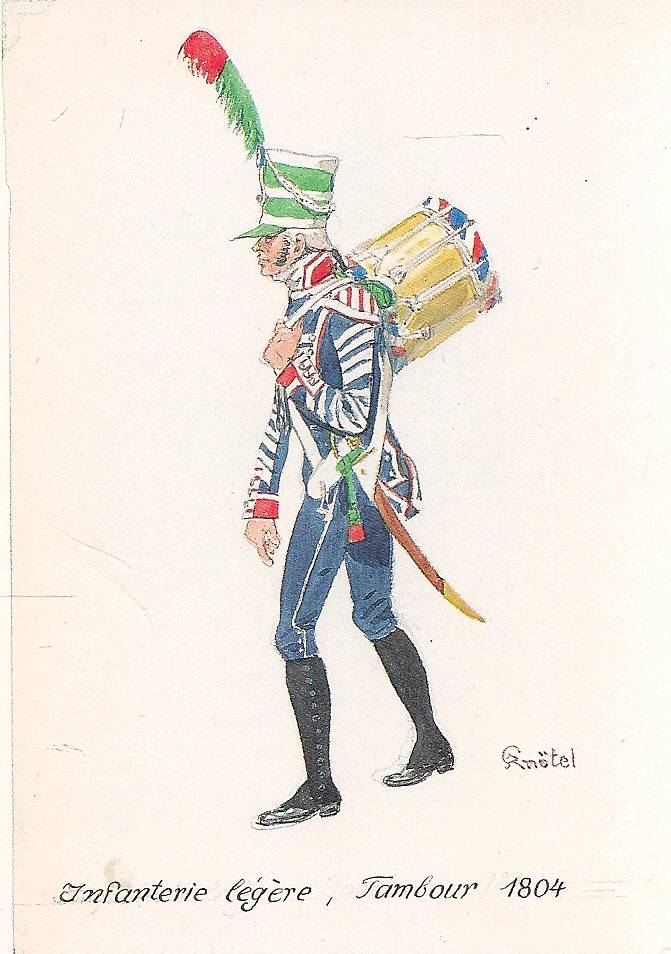 Light Infantry Drummer, 1804 Richard Knötel (1857-1914)
Interestingly, the Voltigeurs and Fusiliers wore their hat differently. During the battle, they turned it across the head ("a la Napoleon"), but in the ranks on the march, for the sake of convenience, they turned it 90 degrees like a huge garrison cap. By the way, the appearance of the Vaulters is largely associated with the fact that Napoleon thus wished to mark the brave soldiers who, due to their small stature, could not get into the companies of grenadiers or carabinieri. 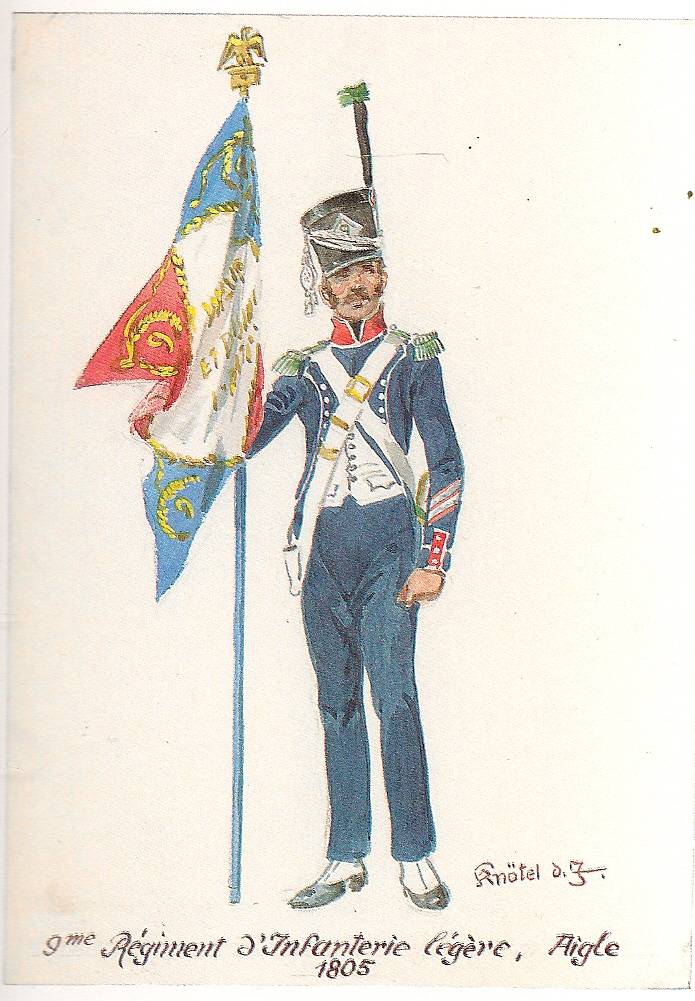 9th Light Infantry Regiment. Standard bearer, 1805 Richard Knötel (1857-1914)
The light infantry was considered elite. Its chasseurs (landing gear) companies were the equivalent of fusilier companies in the line infantry, and the carabinieri were analogous to grenadiers. These were dressed in blue from head to toe. The carabinieri wore fur hats without a forehead with a red sultan and red trim on their uniforms, including epaulettes, but ordinary huntsmen and voltigeurs had already received shako with leather peaks and a hunter's horn in front. But the sultans and epaulettes of the shooters, as well as the collars and cuffs, were green (the voltigeurs had yellow collars). People of small stature, very mobile were selected for the chasseurs (chasseurs) companies. 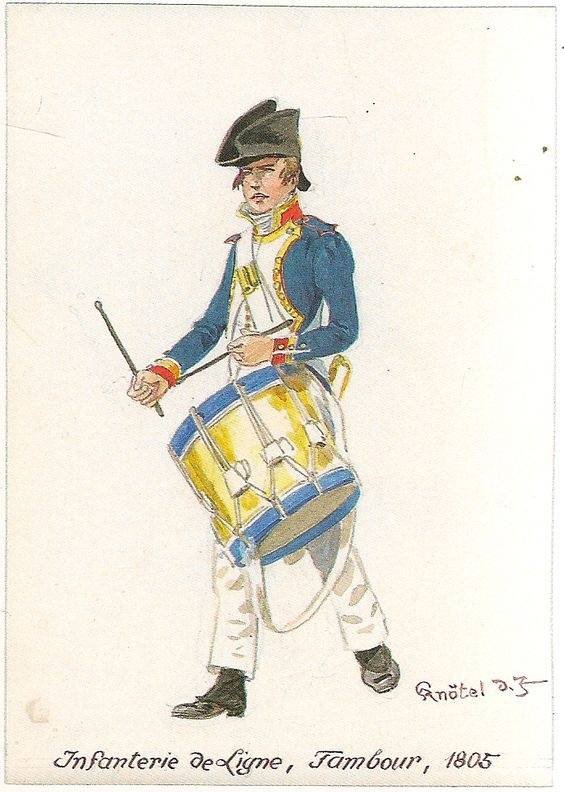 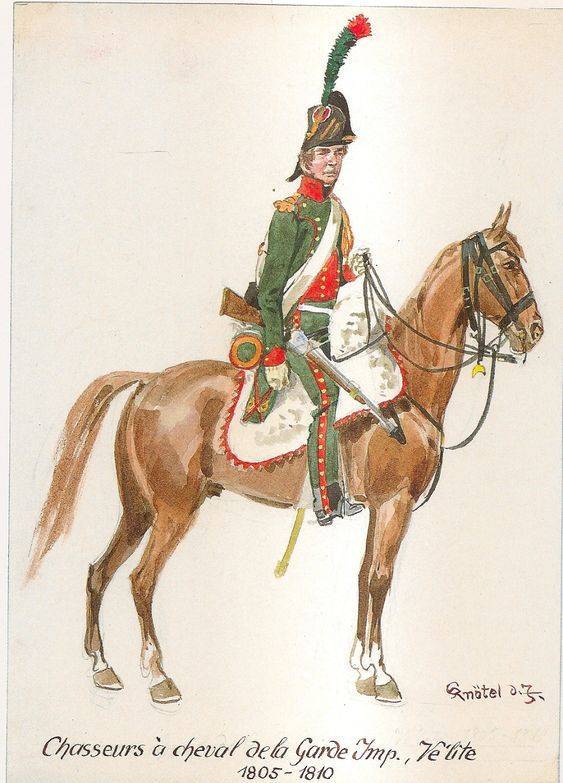 Horse chasseur, 1805-1810 Richard Knötel (1857-1914)
The Napoleonic army had numerous cavalry, the varieties of which differed in many respects from the cavalry of other armies. So, in the army at Austerlitz, there were mounted grenadiers who wore blue frock coats buttoned to the waist and did not have lapels, fur hats, gray cloaks with a cape, cloth pants, too, white, but tucked into high boots. 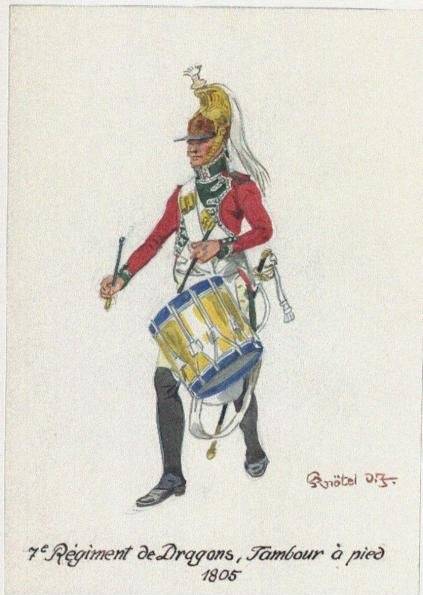 Drummer of the 1st Dragoon Regiment, 1805 Richard Knötel (1857-1914)
The privates of the Horse Grenadier Regiment wore blue uniforms and marching trousers, as well as high fur hats without a forehead and a sultan. Which, however, with a blue color, were also among the trumpeters. The horse-jaeger regiment was distinguished by a hussar uniform, but without a mentic and a fur hat with a green-red sultan. A rolled-up cloak was worn over the shoulder, as was customary in the Russian army, to serve the rider with additional protection. 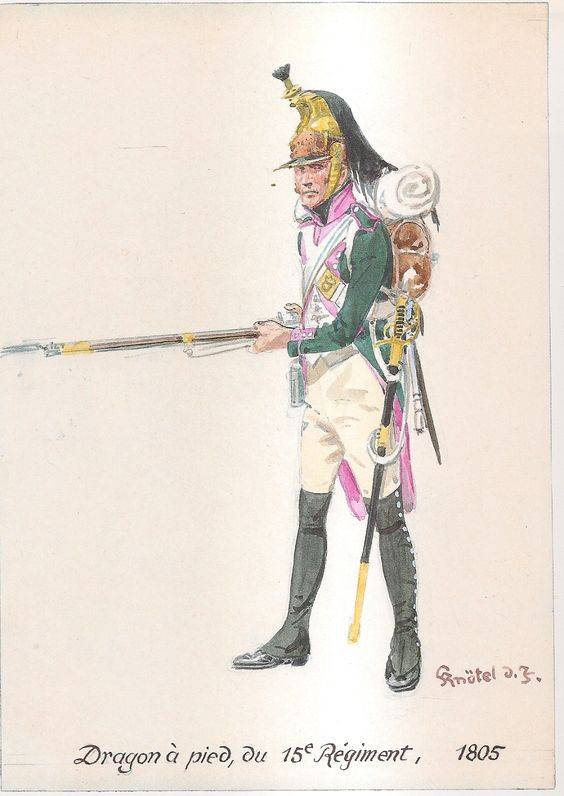 Mamluk of Napoleon's army, 1805 Richard Knötel (1857-1914)
The Mamluks - their company was attached to the Horse-Jaeger Regiment, wore their oriental costumes.

The light cavalry had green hussar uniforms, red chikchirs and a fur kolbak (a headdress with a sultan and a shlyak), and some parts were green chikchirs and shako, similar to the hussars. 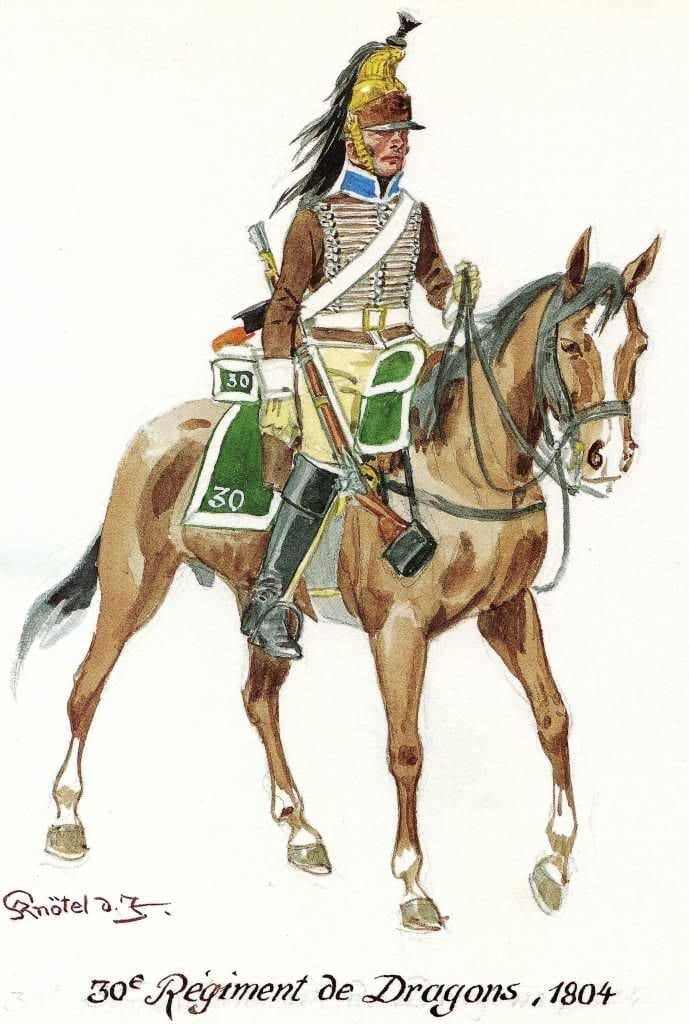 30th Dragoon Regiment, 1804 Richard Knötel (1857-1914)
Horse artillery had uniforms similar to those of the hussars, but without a mentic and with red sultans on shakos. 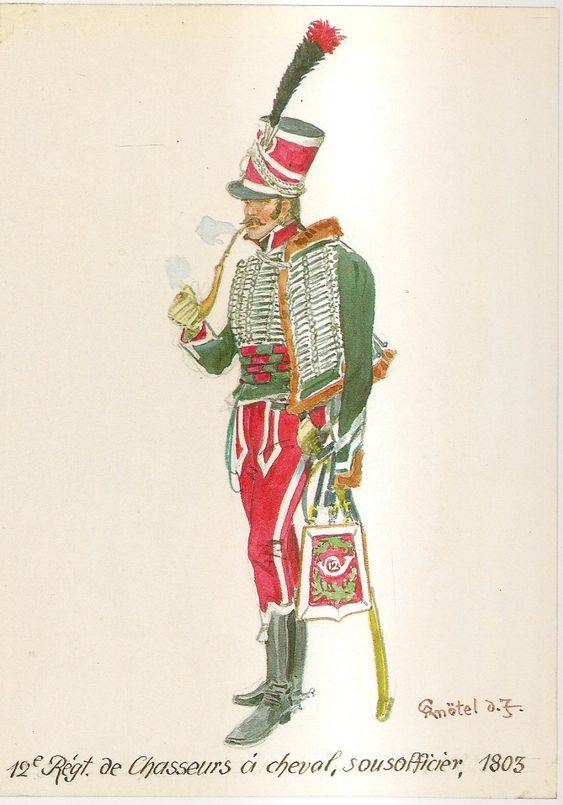 12th Regiment of Horse Chasseurs, sous-officer, 1803 Richard Knötel (1857-1914)
The hussar uniform was traditionally bright, two-colored - a dolman of one color, a mentik of another, and on the left a tashku on three white belts with the regiment number. In the marching form, the sultan from the shako was replaced by a pompom.

Cuirassier regiments were considered elite cavalry, therefore they wore red shoulder straps with fringes and a red sultan on the helmet on the left. The cuirasses, of polished metal, were fastened with leather straps on the sides and shoulder straps reinforced with brass. The “tail” on the “white metal” helmet was black for ordinary cuirassiers, and for the trumpeters it was white. The coattails of the cuirassier's uniform were very short and for some reason were also decorated with the image of a burning grenada. 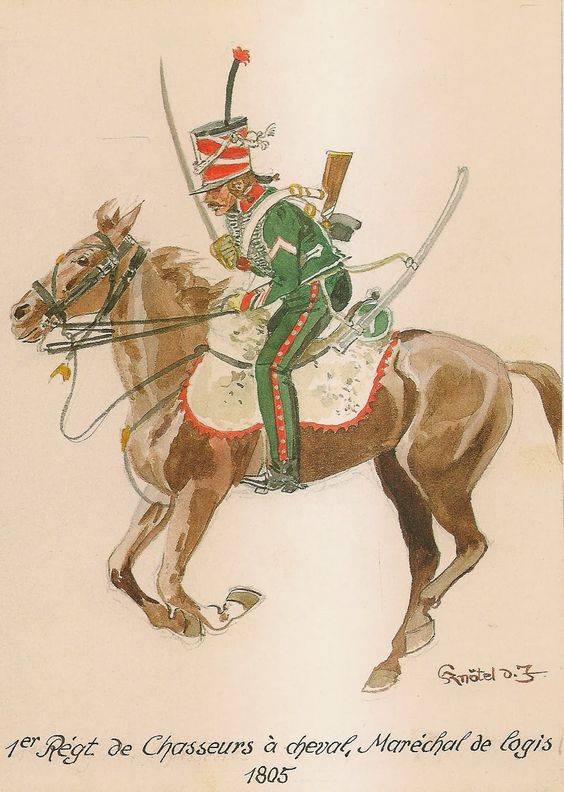 1st Regiment of Horse Chasseurs, 1805 Richard Knötel (1857-1914)
Dragoon uniforms were similar to infantry uniforms, but green in color and with red, yellow, crimson and even orange lapels and collars. Brass helmets with a "tail", like the cuirassiers, and with sultans of red, red-green, black-pink, also fixed to the left. This is exactly how the dragoon regiments were distinguished by the colors of the sultans and lapels with collars. 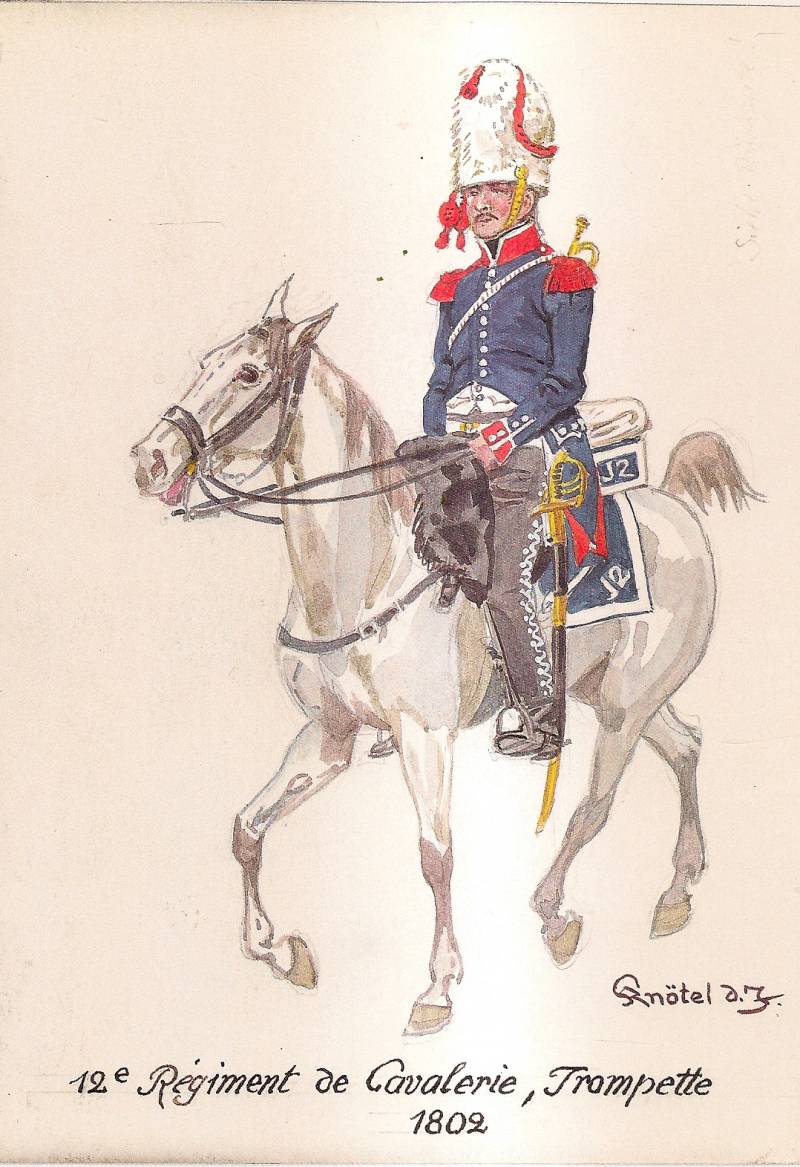 12th Horse Grenadier Regiment. Trumpeter, 1805 Richard Knötel (1857-1914)
Sappers, both guards and regular regiments, with a general regimental uniform, had an apron in front so as not to get it dirty! 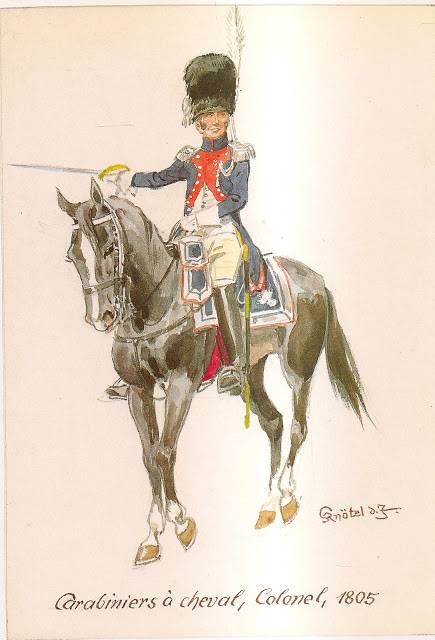 Colonel of Horse Carabinieri, 1805 Richard Knötel (1857-1914)
The marshals and generals of the Grand Army had very simple but exquisite uniforms with gold embroidery, but the staff officers, again, were blue uniforms with leggings and boots or the same trousers outside. Epaulettes from gold gimp and bicorne hats "from shoulder to shoulder" with or without the Sultan - depending on the rank and belonging to the military formation. But the senior officer, who was an adjutant to the marshal, according to the regulations wore a hussar-type uniform with a white mentic, and often a white kolbak with a red sultan, so that everyone could see, if something happened, who was in front of them!