The Komandirsha-E complex is capable of changing the layout of the Donbass theater of operations overnight. Formidable help in the tasks of the "republican" anti-tank crews 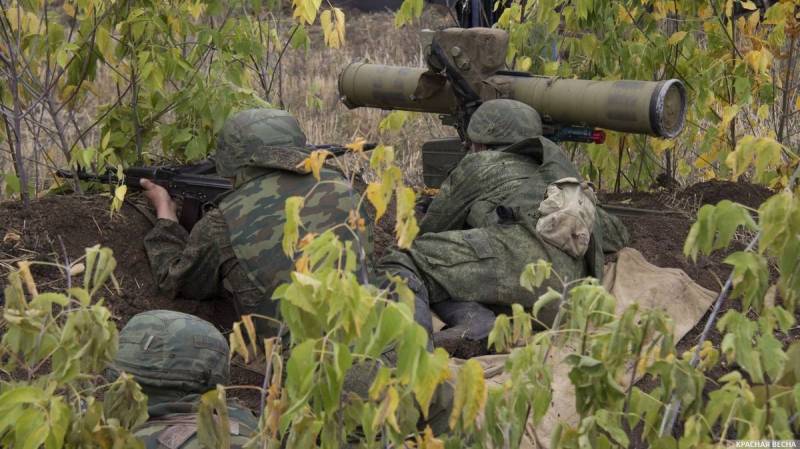 In light of the hasty formation of the 36th separate marine brigade (OBRMP), as well as the 93rd, 30th, 57th, 92nd, 24th, 53rd separate mechanized and 80th separate airborne assault brigades of the Armed Forces of Ukraine of the most powerful offensive "skeletons" in the key operational areas of the "frozen" Donbass theater of military operations on the eve of the escalation denouement, the issue of the timely construction of highly efficient echeloned by the units of the 1st and 2nd army corps of the People's Militia of the LDNR anti-tank zones A2 / AD, capable of either completely stopping attempts to break through armored BTGs of the Armed Forces of Ukraine to a significant operational depth of defense of the republican corps, or holding back the onslaught of enemy mechanized units until the arrival of regular units of the Russian army.

To implement this tactic, the anti-tank subdivisions of the LDNR army corps have at their disposal a wide range of anti-tank weapons, including ATGMs of the 2nd generation "Fagot", "Konkurs / -M", "Metis / -M1", ATGMs of the 3rd generation "Kornet-E ", 100-mm towed anti-tank guns 2A29 (MT-12)" Rapira ", as well as 73-mm heavy anti-tank grenade launchers of the SPG-9" Kopye "line.

Taking into account the fact that the Ukrainian MBT T-64BV / BM, T-72AV / B1, T-72AMT, as well as T-80B / BV, redeployed to the line of contact, do not have elements of the HSCHKV-19 / 34P dynamic protection "Duplet "(Providing a 90% increase in resistance from CS with a tandem warhead), and can only boast of the presence of DZ" Contact-1 "and" Knife "(the first does not provide an increase in equivalent resistance from tandem CS, the second - only a 20% increase) , the following and only technically sound conclusion suggests itself.

Anti-tank missile systems "Metis-M1", "Konkurs-M", as well as "Kornet-E" provide an almost 95% probability of penetrating the VLD of the hull and frontal armor plates of the turret of the aforementioned Ukrainian tanks at the angles of safe maneuvering ± 20 degrees from the heading direction of the tank and the longitudinal axis of the bore.

In the same turn, at angles of fire of more than 35 degrees, the penetration of the side armor plates of the hulls and towers of the above vehicles can be achieved even by means of the PG-9 and PG-9S anti-tank grenades (included in the ammunition of the “boots” / SPG-9), and the 9M117 “Kustet "For the MT-12 Rapier anti-tank gun, not to mention the 9M111M ATGM of the Fagot complex, the 9M113M Konkurs-M and 9M133-1 Kornet-E complex.

Meanwhile, in difficult meteorological conditions, implying low permeability of infrared waves and waves of the visible optical range through the atmosphere, in the event of the enemy using specialized complexes for reducing the infrared signature of armored vehicles (heat-absorbing screens for MTO, etc.), or with prolonged shutdown of the unit's power plant (turns a unit of armored vehicles into a "cold body"), or concealment of equipment in a small size of a green landscape, the possibility of optical-electronic sighting devices 9SH119M1 and thermal imaging sights 1PN86-1 "Mulat" and 1PN79M "Metis-2" for timely direction finding of tanks and other armored vehicles of the enemy can significantly decrease, providing the enemy's advancing armored BTGs with precious minutes to “break through” the first two lines of defense.

This problem can be fundamentally solved by integrating the Konkurs-M, Metis-M1 and Kornet-E anti-tank systems, which are in service with the republican corps, into a single network-centric information field with multi-element automated control systems for the Komandirsha-E anti-tank subunits.

Having portable anti-jamming radars for ground / artillery reconnaissance 1L111M (SBR-5M "Fara-VR") based on a high-resolution slotted antenna array (measurement error in range - 3 m, azimuth - 0,3 deg.) From Tula JSC NPO Strela ", the Komandirsha-E complexes will be capable of opening up the approaching mechanized units of the Armed Forces of Ukraine in any meteorological / atmospheric or landscape conditions (be it fog, rainstorm, smog, smoke , dustiness, "brilliant green", etc.).

Then, by using the command terminals equipped with multifunctional indicator tablets displaying information about the targets detected by the Fara-VR radar and radio stations for exchanging data on the tactical situation, the operators of the Komandirsha-E complexes can timely carry out target allocation between the calculations of Competitions-M, Metisov-M "and" Kornetov-E ", providing each of them with individual spatial (elevation and azimuth) coordinates of the most priority units of enemy armored vehicles long before the possibility of their detection by means of their own sights" Mulat "and" Metis-2 ".

As a result, even in difficult atmospheric conditions, ATGM crews of the 1st and 2nd Army Corps will be able to prepare in advance the launchers and laser-beam units of their complexes for a "hot" meeting of the "Square" armored vehicles.

And this is not to mention the fact that the corresponding constructive and software and hardware adaptation (providing for the introduction of individual ballistic parameters of the carrier weapon and the impact of atmospheric parameters in relation to various types of shells) surface / artillery reconnaissance radars SBR-5M "Fara-VR" the latter both for the Rapier anti-tank guns and for other anti-tank weapons.

Is this not yet another adequate response to the supply of "Ukrovermacht" with "Javelins" and other promising lethal weapons?

Ctrl Enter
Noticed oshЫbku Highlight text and press. Ctrl + Enter
We are
“Hotel” from “Mad Dog”: the threat from “Javelins” in the Donbas TVD is underestimated. How to answer?A proper response to the delivery of Kiev ATGM FGM-148. Complexes "Svir" will be able to stop the upcoming offensive of the Armed Forces in the Donbass
Military Reviewin Yandex News
Military Reviewin Google News
62 comments
Ad