Ambitions of the United States 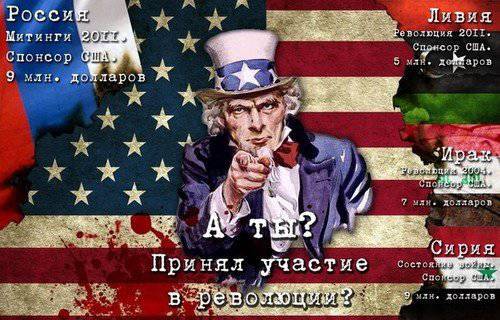 Really nobody paid attention, that the countries which after together have rushed to be friends with the West, gradually fall deeper and deeper into a trap? It rots everything. Starting from foreign policy and ending with culture. Anything uncle "Uncle Sam" is declared "anti-democratic."

There is a disagreeable strong government - you can make a revolution, and thus eliminate the "dictators", there is oil and gas - they doubt the quality of democracy. There are many more examples. These countries, first of all, include the countries of the "Big Six": Ukraine, Georgia, Poland, Lithuania, Latvia, Estonia. Otherwise, they can not be called in any way.

Georgia and, at one time, Ukraine was bleeding from the nose, but they were striving, and even now Georgia is dreaming of joining NATO. What for? with their army? Or do they want to achieve something with the help of NATO?

But what? After the collapse of the USSR, NATO has one unsolved task, namely, to destroy Russia. As a state. Capture the Siberian resources in their paws, put an end to the power and influence of Russia on the CIS countries, in a word, eat it. In the middle of the 20th century, in the USA, a program was developed for the phased collapse of the Soviet Union. Her name is "Plan of Dallas".

Allan Dallas, the then head of the CIA, wrote:
"Slowly, but inevitably, the picture of the death of the most rebellious people in the world, the Russian, will be played out. We will make every effort not to see our mark in this. We will introduce the most base feelings: cult of sex, violence, immorality, alcoholism, drug addiction, prostitution, crush their economy with our goods to stifle their competitiveness, put their puppets at the head of their governments, who will complete what they have begun. In short, this will be the End of Russia and the collapse of the Russian nation. We will dictate to them a different look at history, they must forget their contribution to the development of civilization. They should be confident that thanks to us they have become human. Only a few people will guess what is going on, but of such people we will make a mockery. Turn them into rogue. No one will listen to them ... "

Later, this program was supplemented by an American political analyst of Polish origin Zbigniew Brzezinski. The implementation of the plan in practice began with the "era of perestroika", when Gorbachev tried his best to get close to Reagan, who directly called the USSR the "Evil Empire".

After the collapse of the USSR, in the "fierce 90-e", Russia came close to the edge. Total confusion.

The collapse of the economy, the collapse of the army, the decentralization of power, the moral decay of the nation, the demographic crisis, impoverishment, the politics of Yeltsin's Westerner ... Separatism and terrorism. The war in Chechnya. Default 1998 year. Russia was one step away from the abyss. And the USA in every possible way showed us good will, smiling and feeding with promises.

At the same time, in the former Soviet republics, not without the help of the Pentagon, the so-called “Color revolutions” began to occur: Orange in Ukraine, Velvet in Georgia, Tulip in Krigizia, etc. They were set up with the aim of shifting the "objectionable" governments to the "truly democratic" nationalist power. Again promising them support and feeding promises. And the persecution began. With the coming to power of Vladimir Putin in Russia, the US side accuses everything: we have no democracy, totalitarianism, we are aggressors .... In August 2008, after the well-known events, we were accused of allegedly attacking Georgia! The absurdity of the idea was understood immediately. True, only in Germany and France.

Nobody listened to the USA. And in the autumn of the same year, they staged a world crisis that hurt the Russian economy painfully. The truth is that the same crisis caused the United States a lot of problems.

Under Putin, Russia rose and again took its place. We have a strong economy, the minimum national debt - 7% of GDP - we again declare ourselves. And now we are building the Eurasian Union. True, as soon as Putin’s article came out about it, rumors about the reconstruction of the USSR immediately followed. The United States has grand imperial manners, and now the Republican candidate Mormon Mit Mitney Romney declares in all possible primaries that the quote “It’s time for America to regain its former power in the world! We never have to report our actions to anyone! We just have to rein in Russia , destroy the Iranian threat, eliminate the "Arab Spring". " By the way, this is the "Arab Spring" - developed in the Pentagon. Someone will tolerate strong leaders in the countries of the Maghreb, which is so rich in oil. It was necessary to urgently remove these leaders, such as Gaddafi, Mubarak, Asad in Syria, to go somewhere far away. With Muammar Gaddafi and Hosni Mubarok, everything turned out, but now Assad ... Will the NATO warriors be able to break his regime, like Gaddafi, or will they do everything in a "peaceful democratic way"? If you now blame the US for hegemony - you can run into big trouble. The only countries that can say the US "NO!" - this is Russia, China and Germany. When there were elections in Russia, in March of this year, a lot of criticism was addressed to Putin. Like, he is illegally elected. We must choose a worthy candidate! Bulk, for example. Or Udaltsova. Here they can restore democracy in Russia!

Ugh! Sickeningly. Rats like Sergei Udaltsov and blogger Navalny are sold to the roots! What would happen if they took power is clearly shown in a video on YouTube: "Russia without Putin" http://www.youtube.com/watch?v=-9-5NBaAEI. Therefore, it is not surprising that in the United States they do not welcome Putin’s coming to power in Russia.

They do not need a strong Russia, they need the world to be without it. So calmer. It is easier to spread an infection called "democracy."