The return of "Chersky" and the Suez incident. March Chronicles of "Nord Stream 2" 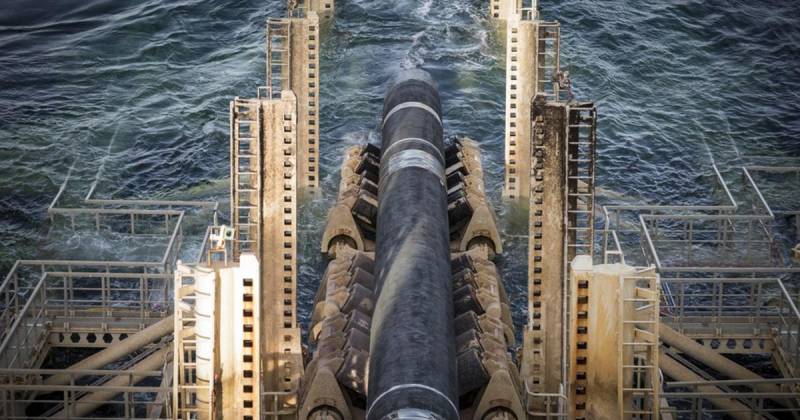 March 2021 year. In general, the first spring month for Nord Stream 2 turned out to be one of the quietest ever since the resumption of pipe laying. However, in parallel with this, there was a tightening of the sanctions pressure on the project from the United States.

As you know, in February, the US State Department actually limited the list of those falling under the new sanctions to the pipe-laying barge TUB "Fortuna" and its owner KVT-Rus. This was reported to Congress with a reminder that both the barge and the ship owner were already on the list of sanctions under another law - on countering America's adversaries through sanctions (CAATSA). 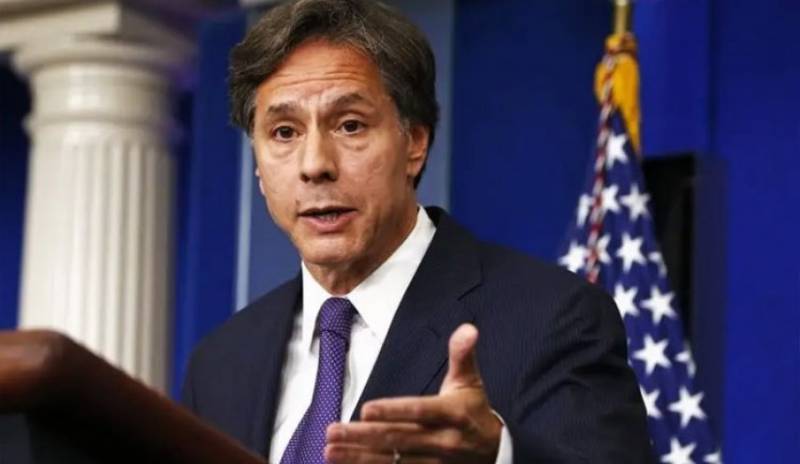 However, this was not enough for the Republican congressmen, and they not only severely criticized the US State Department and personally Secretary of State Anthony Blinken (pictured), but also prepared a list of ships that, according to open sources, are involved in the construction of the pipeline. It includes 15 vessels, including the "Fortuna", and the crane-assembly pipe-laying vessel KMTUS "Akademik Chersky".

1 – 7 March. In the first week of March, oil prices rose to new highs in more than a year. The market took into account the preservation of restrictive quotas for oil production by the participants in the OPEC + agreement.

Permission to increase production levels taking into account the seasonal factor was granted only to Russia and Kazakhstan (see. OPEC + - a counter plan for Russia). At the same time, Saudi Arabia extended the voluntary production cut by 1 million barrels per day until April 2021.

TUB "Fortuna" these days led the construction of "Nord Stream-2" in the waters of Denmark at a record pace. Meanwhile, Gazprom announced its readiness, together with Shell, to supply the first "green" - that is, a completely carbon-neutral batch of LNG to Europe.

9 March. After almost a month and a half in the port of Wismar in northern Germany, the second pipelayer of the stream, Akademik Chersky, has emerged from it, preparing to join the project. The Danish Maritime Agency has included KMTUS in the notice to mariners regarding the construction of the gas pipeline.

Previously, Akademik Chersky was considered the main pipelayer of the Nord Stream 2 project.

10 March. At a hearing in the House of Representatives Foreign Affairs Committee, US Secretary of State Anthony Blinken said that the US administration is considering the possibility of applying additional sanctions against participants in the Nord Stream 2 project.

Republicans in Congress intend to push for stronger sanctions on the project, while Democratic President Joseph Biden aims to improve relations with Germany. During the hearings, E. Blinken was criticized for the insufficient, in the opinion of the congressmen, the implementation of sanctions against Nord Stream 2.

The diplomat mainly responded to the attacks of the Republicans with assurances that the US administration considers the project harmful, and promises to study the issue of additional sanctions. Anthony Blinken believes that the Russian-European project violates the principles of EU energy security and endangers the economic and strategic situation for Ukraine and Poland.

The US administration is considering the possibility of applying sanctions against the project operator Nord Stream 2 AG, the sole shareholder of which is Gazprom.

6 March. A storm in the Baltic Sea put all work on the construction of Nord Stream 2 on pause. But the very next day, all work returned to the previous schedule. Meanwhile, KMTUS "Akademik Chersky", as expected, arrived in the area of ​​the Curonian Spit.

12 March. TUB Fortuna again suspended the construction of Nord Stream 2 in the exclusive economic zone (EEZ) of Denmark due to unfavorable weather conditions.

For the same reason, KMTUS "Akademik Chersky", located in the area of ​​the Curonian Spit, moved closer to the border of the territorial waters of Russia.

The head of the press service of the US State Department Ned Price said at a regular briefing that the US administration will comply with the requirements of US legislation and introduce new sanctions on the Nord Stream 2 project, if additional legal entities involved in the construction of the gas pipeline are calculated within the allotted three months.

15 March. After the next spring storm in the Baltic calmed down, TUB Fortuna returned to the construction of the Nord Stream 2 gas pipeline in the Danish EEZ. KMTUS "Akademik Chersky", which is promised the role of the main pipe-layer, returned from the border of the territorial waters of Russia to the test site farther from the coast in the Curonian Spit.

17 March. It became known that the Akademik Chersky, who arrived on March 9 from the port of Wismar to the area of ​​the Curonian Spit, continued testing, and is also preparing for certification. KMTUS works with the use of so-called dynamic positioning systems, the use of which was demanded by Germany.

17 – 19 March. Optimism on the oil market has dried up - oil has lost more than 8% in price since the beginning of the week. The reasons were both problems with vaccinations and new lockdowns in Europe, as well as concerns about growing stocks and a slow recovery in demand.

The scandalous statements by US President D. Biden about Russian President Putin and Russia's interference in the US elections brought down the blue chips of the Russian stock market.

19 March. Due to another storm, TUB "Fortuna" again suspended the construction of a gas pipeline in the Danish EEZ. At the same time, the Murman multifunctional rescue vessel, which had previously accompanied the Akademik Chersky KMTUS, arrived at the construction site, which is to begin construction by the end of March 2021. 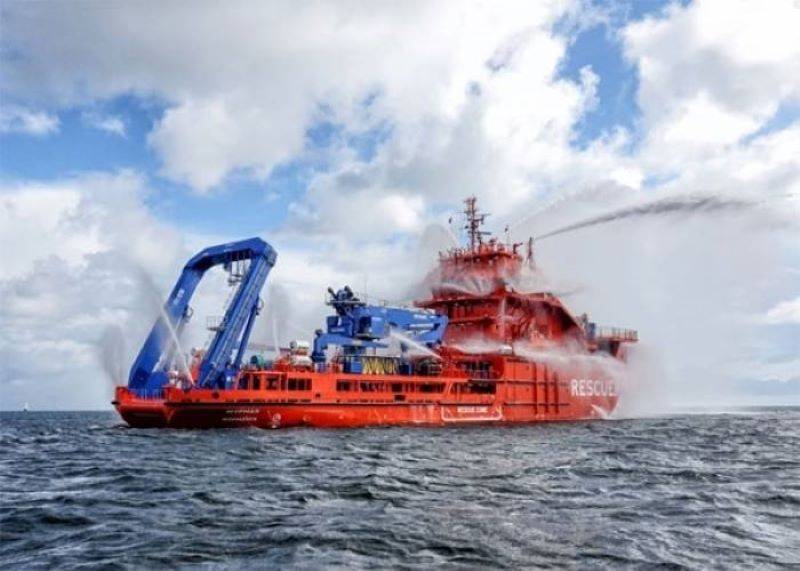 Murman arrived for exploration in the place where in December 2019, due to US sanctions, the construction of the first string of the gas pipeline was stopped by the pipelayer Solitare, which belongs to the Swiss company Allseas, which left the project.

22 – 28 March. The oil market was in a fever all week. The jump in oil prices reached 6 percent amid concerns about falling demand in Europe due to the third wave of the coronavirus pandemic, slow rates of vaccinations, rising US stocks and other problems.

However, the blocking of the Suez Canal due to the grounded mega-dry cargo ship Ever Given was a factor that stopped the decline in quotations.

On the night of March 24, 2021, the container ship Ever Given, while moving along the Suez Canal, allegedly due to a strong crosswind, was deployed, as a result of which the bow and stern of the vessel went deep into the left and right banks of the canal, blocking the vessel. 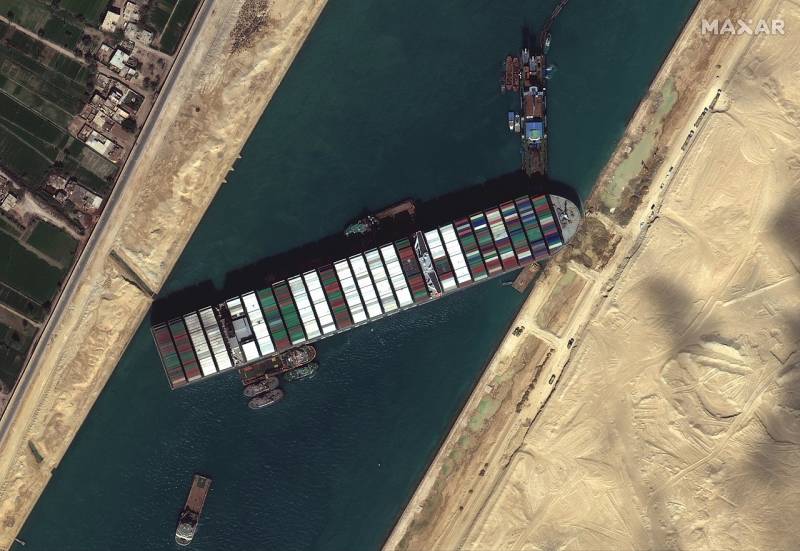 Photo: Maxar Technologies
The traffic on the canal was stopped due to an accident. As of March 26, 2021, more than 150 other ships have gathered in the queue to pass through the canal. Financiers estimated that up to 50 ships carrying $ 9,6 billion worth of goods passed through the waterway every day.

Prior to that, in the Gulf of Suez, the bulk carrier Ark Royal under the flag of Barbados made a bulk on the Baltic oil tanker. fleet Russian Navy "Cola".

On the same day, at a press conference following a meeting with German Foreign Minister H. Maas, which took place on the sidelines of the NATO summit in Brussels, US Secretary of State E. Blinken said that the United States and Germany remain at odds on the implementation of the Nord Stream 2 project. ".

E. Blinken recalled that Germany is one of the closest allies of the United States, but America will not allow deep disagreements on a separate project to impede work on other issues for the benefit of the people of the two countries.

25 March. Taking advantage of the improved weather, TUB Fortuna continued construction of the second string of Nord Stream 2. The second pipelayer "Akademik Chersky" continued testing in the area of ​​the Curonian Spit. 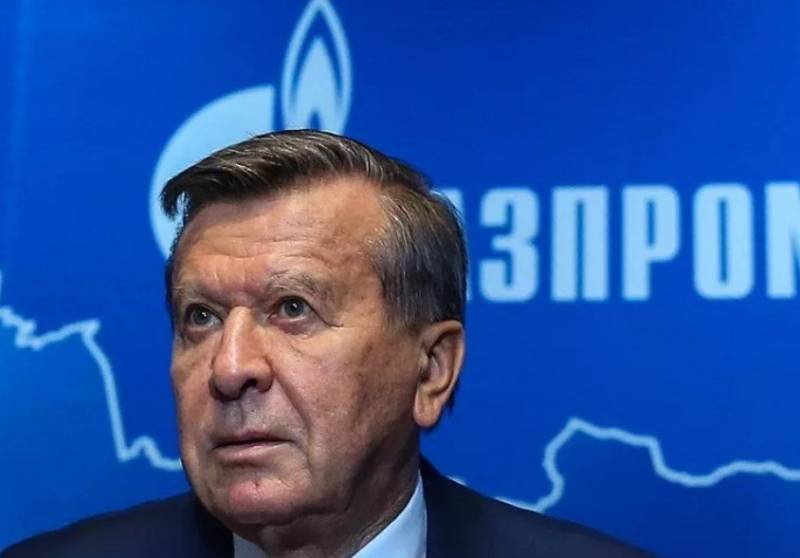 26 March. The head of the Gazprom board of directors Viktor Zubkov (pictured), answering questions from the press in Berlin, said that the Nord Stream 2 gas pipeline will be completed in 2021. At the same time, the Russian concern will continue to transit gas through the Ukrainian gas transportation system, and Gazprom is not expected to revise the terms of the contract.

29 March. The container ship Ever Given, retired in the Suez Canal, was tugged north towards the lakes. There will be a technical inspection of the vessel. This was announced on Monday by the Suez Canal Administration.

Actually, it's a great fortune that a container ship is stuck in the narrowness of the Suez Canal, and not some tanker. Although it could have been possible to pump out a little oil faster than to remove a couple of hundred containers, and even more so to pump out the sand from under the grounded giant.

The main conclusion that can be drawn from a sigh after taking a container ship aground is that you have to be very careful with LNG. Even with global warming, the Northern Sea Route will remain a much more risky route compared to the Suez Canal.