Monuments of the XNUMXth century in Estonia

Monument from the Livonian War

In total, on the territory of modern Estonia there is only one monument erected during the Livonian War on the site of the battle. 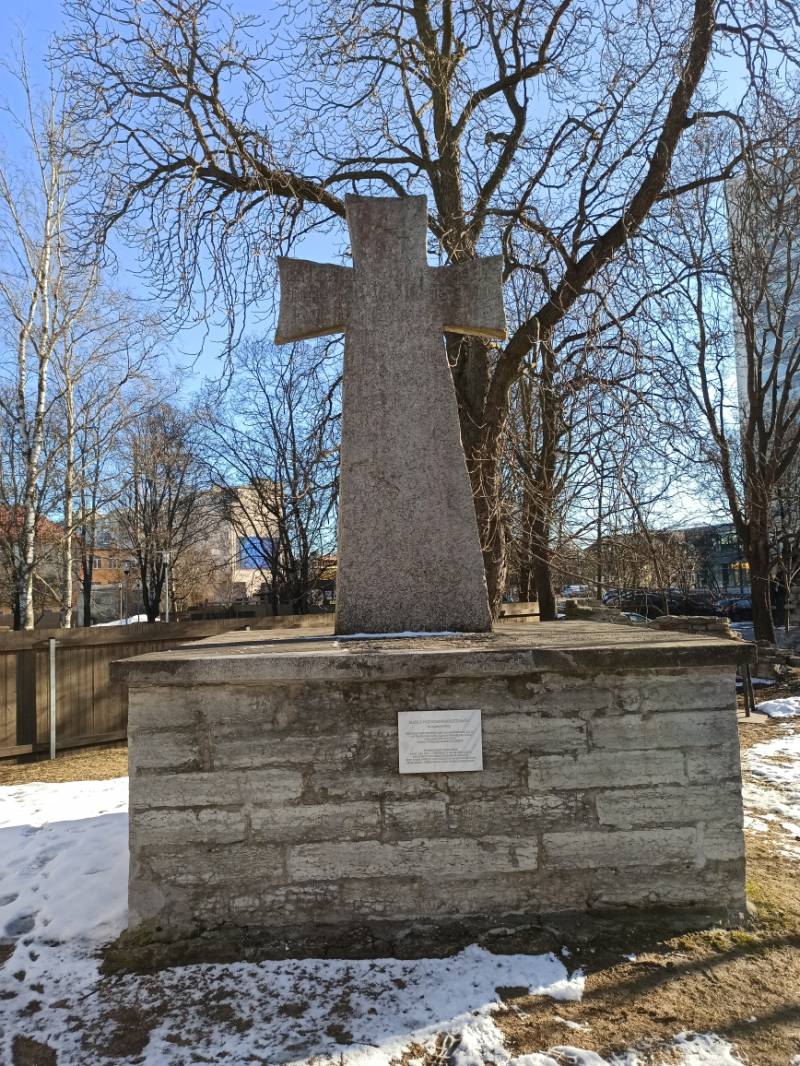 The modern look of the cross. Photo by the author
It is located in Tallinn on the corner of Tondi and Marta streets in a small square. And it's pretty hard to find.

This is a three-meter stone cross, erected in memory of Blasius Hochgreve, one of the richest merchants of Reval, who died on September 11, 1560 in the battle of the Revel militia on the Jerusalem hill near Reval. 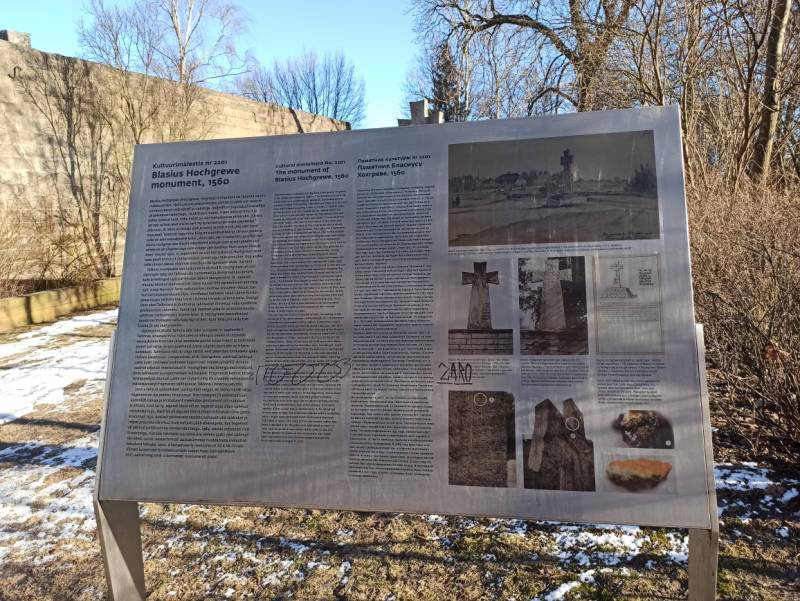 Information stand. Photo by the author
Another monument, erected in 1590, is located next to the Tallinn-Narva highway, called the Kõrkküla kivirist. It is about 135 km from Tallinn. But this is a different war.

But it is interesting that both of these monuments are made in the form of a Maltese cross.

Sources about the battle on the Jerusalem hill: Denkelbuch or "protocol book of the brotherhood", "Chronicles of the province of Livonia" Balthazar Russov, Pskov chronicle. These are the main sources.

All sources describe the battle in different ways.

The book of the Brotherhood of Blackheads gives victory to the Revels, and the Livonian Chronicles and the Pskov Chronicle unequivocally assert that the victory was for the Russian troops.

After the capture of the fortress-castle Fellin (Viljandi) on August 30, 1560, a regiment headed by boyar Ivan Yakovlev and Prince Grigory Meshchersky was sent to Revel with a proposal to surrender the city.

The regiment consisted of 11 hundred horsemen, which is about 1500 people.

Most likely, Russian troops arrived in the Reval area the previous day and camped a couple of kilometers from the city walls.

The rebels decided to use the factor of surprise: to attack the camp early in the morning.

Having gone 3/4 of the way the advance guard of the advancing, and these were mainly members of the Brotherhood of Blackheads, came across a guard detachment. And a fight ensued. The forces were not equal, but soon help arrived from the camp. And the attack was repulsed. Seeing full of excellent Russians, the people of Revel hurried to the outside of the city walls. Their main forces did not even have time to take part in the battle.

Why do I write "Reveltsy"? But because representatives of all urban classes and the garrison of the city took part in this adventurous outing.

This is described in an interesting way by Baltazar Russov:

“With the same detachment, the Muscovite, returning from Vic, appeared before Revel and camped first in the Garksky yard, one and a half miles from the city. Then the Revels, and noblemen, and non-noblemen, members of the magistrate, burghers, gesels, landsknechts and commoners on horseback and on foot early in the morning made a sortie from the city and took with them two field guns in the hope of catching the enemy by surprise. After about three-quarters of the way, they stumbled upon a detachment who was supposed to drive the cattle they had killed; they killed many of this detachment, took away from them all the spoils taken in Vic, which amounted to several thousand cattle and several prisoners, and ordered them to drive them to the city. But then the other Russians in the camp soon recovered, rushed at the Revelites and fought with them. But the Revels, by the number of Russians, had to retreat, hoping to get reinforcements from the Landsknechts and infantrymen who were left behind. But the landsknechts and infantrymen, seeing that the nobles were running, also ran into the bushes and swamps, wherever anyone could climb, and threw the cannons, which the Russians took along with the magistrate horses that were carrying them (after the battle) ... Then the Russians picked up their dead, drove them to neighboring villages and burned the villages along with the bodies and went to Wittenstein to another detachment. It happened in 1560, on September 11th. "
According to all sources, a different number of the enemy's deaths was noted, the numbers are clearly overestimated at times, but, most likely, the number of their losses is indicated correctly. And therefore, it is quite easy to establish true losses.

On the part of the Revelites, about 60 people died, including 11 brothers of the Brotherhood of Blackheads. Russian losses: 15 "children of the boyars" and if you add their servants who died with them, you get no more than 50 people.

I separately indicated the dead brothers, since they installed three crosses on the battlefield. One cross has survived.

Interestingly, one of the dead brothers, Master Hans, was an eye doctor.

The brothers also ordered an epitaph painting, which is now located in the Kiek in de Kök tower. 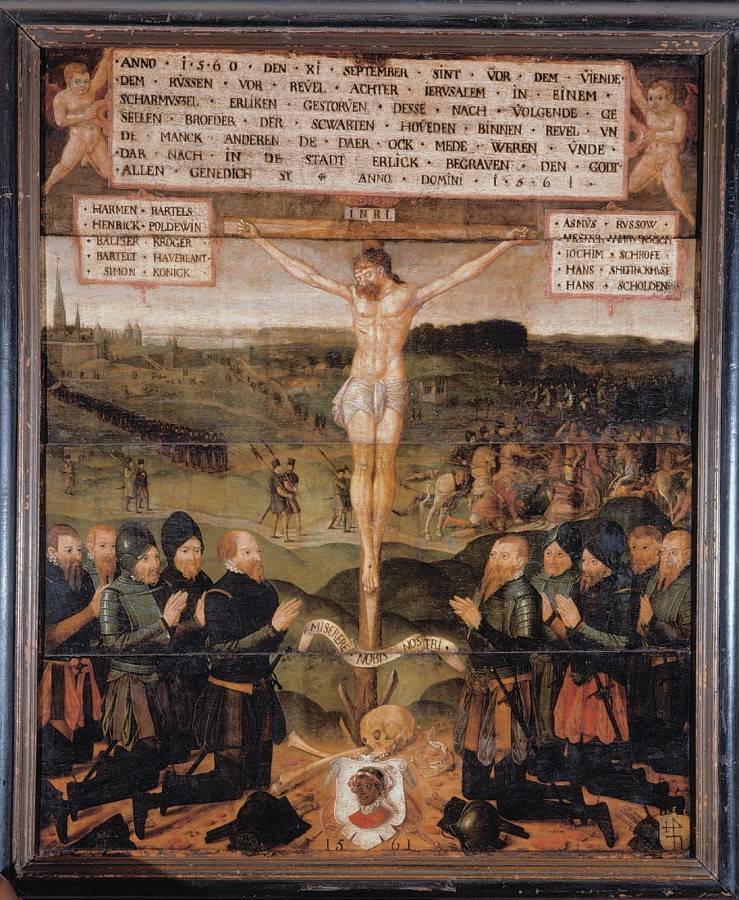 Epitaph painting
For some reason, the painting depicts only 10 dead brothers (where else were they going?). The painting is made in the form of an icon. In the upper left corner is the very first image of Tallinn, in the right - the battle itself. In the foreground are the dead, above them is their list of names, in the center under the cross is a scroll depicting the head of St. Maurice, the patron saint of the brotherhood.

Why did I turn to this minor episode of the Livonian War? Unfortunately, today we have few monuments of those events. And here you can literally touch stories.

Memorial cross to the boyar

We all know about the famous fugitive from the tyranny of Tsar Ivan IV, Prince Kurbsky, thanks to their epistolary "novel". But quite a few nobles fled with their families abroad from the domestic policy pursued by Tsar Ivan Vasilyevich. How to relate to this phenomenon? Probably everyone decides for himself. We know many worthy personalities who, of their own free will, went over to serve the Russian tsars.

A well-known practice: if during the wars a prisoner swore an oath of loyalty to the tsar, then he was left in the army, but was sent to serve in different regions of Russia, using the principle of extraterritoriality. If you are captured in the north-west - if you please serve in the south-east. What made people go into the service of an enemy or a former enemy? The question is not easy and in each case the answer may be different, but there are certain general factors.

After the end of the Livonian War, the Swedes drove the troops of Ivan Vasilyevich out of Livonia, but not all Russians left these lands. In 1584, the nobles Nasakins, Baranovs, Golovachevs, Roslandins, Romanovs, Putilovs appeared in the Swedish service. Some did not want to part with the lands on which they had already taken root. Others were afraid to return because of the death penalty for surrendered fortresses and lost battles. Someone fled from the oprichnina. For naming the Russian noblemen in the Swedish service, the word “bayor” was invented, most likely derived from the Russian word - boyar, which Western sources called all Russians.

The monument, about which the story will go, was installed just to the former Russian nobleman who fought on the side of the Swedes, Vasily Rozlandin. 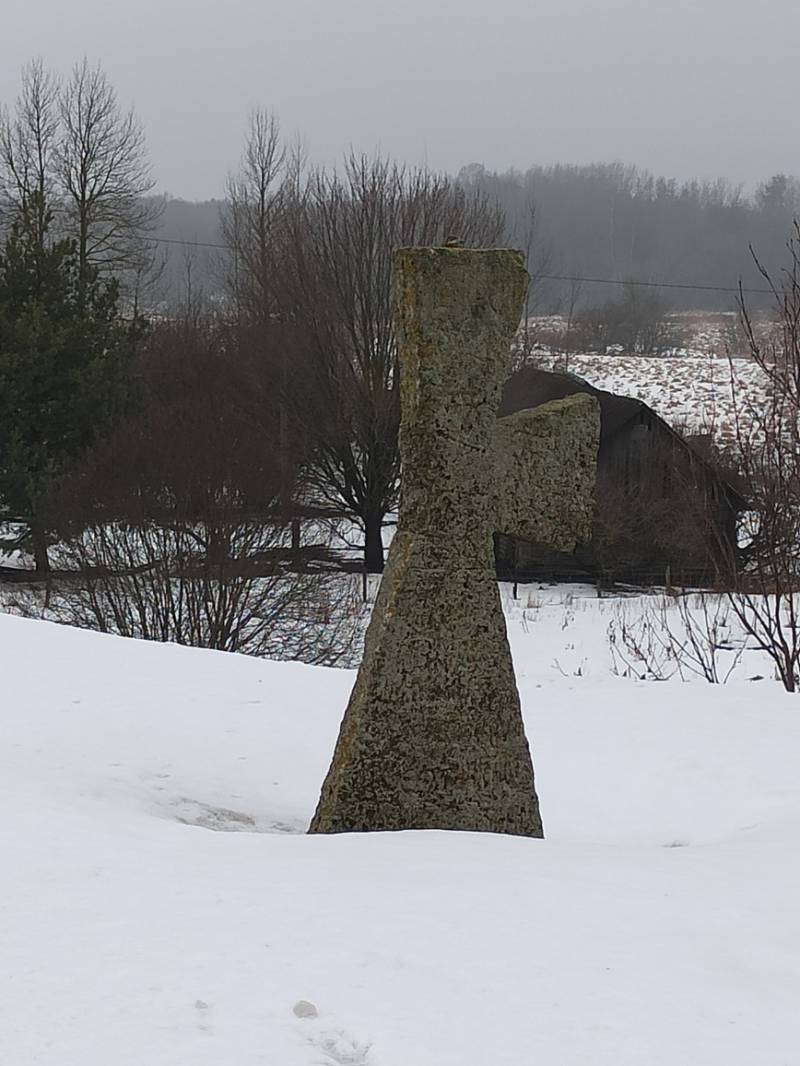 Photo of the Kirkküla cross. Photo of the author
If you enter “Kõrkküla kivirist” into the Google maps search engine, you will see the place where this monument was erected. It is known that in June 1582, three Rozladin brothers (Peter, Fyodor and Vasily) came to Narva from Russia and entered the Swedish service.

Why the Rozladins left Russia, history is silent. Historian S. B. Veselovsky believes that Peter Rozladin could have been a cousin of the voivode Vasily Vasilyevich Rozladin-Kvashnin, a participant in the Livonian War. Like many other Russian nobles, he was executed by order of Ivan the Terrible in the period from 1570-1573. It is known that the entire Rozladin family fell into disgrace. Perhaps this was the reason for the flight of the brothers to the Swedes. At first, the Swedes paid the Russians for the service, and then, starting in 1584, they began to complain of lands. All this remained in the documents. At first, they were given land on the islands, mainly in Hiiumaa, they use the principle of extraterritoriality, that is, away from the Russian border, but then they began to receive land throughout Estonia, Sweden, Finland.

By order of Boris Godunov, the Russian-Swedish war began in 1590. After the capture of the fortress of Yam, Russian troops at the end of January appeared at the walls of Ivangorod. Narva and Ivangorod were defended by a Swedish garrison of about 1600 people under the command of Karl Horn. In addition, a field army of up to 5000 Swedes was stationed near Narva, commanded by Goran Boye. The Rozladin brothers were supposed to be in this compound. Having learned about the numerical superiority of the enemy, Boye left a small barrier in front of Narva, and he himself withdrew with the main forces to the Weisenberg area.

The regiment under the command of Prince Dmitry Khvorostin destroyed the Swedish barrier near Narva and headed deep into Estonia. On February 4, 1590, Goran Boye receives information that a Russian detachment of about 10000 people is moving in his direction. Boye comes forward. In the area of ​​the village of Kirkküla, a battle takes place, in which the Swedes won.

The battle site is located on the only section of the old Narva-Rakvere (Weisenberg) road, which coincides with the modern highway. The cross stands 3-4 meters from the edge of the road. And it is especially clearly visible when driving from the side of Narva. Some members of this site believe that the territory of Estonia was dotted with a network of roads as early as the 1808th century. The road from Rakvere to Narva was the only one. Below is a map of XNUMX. 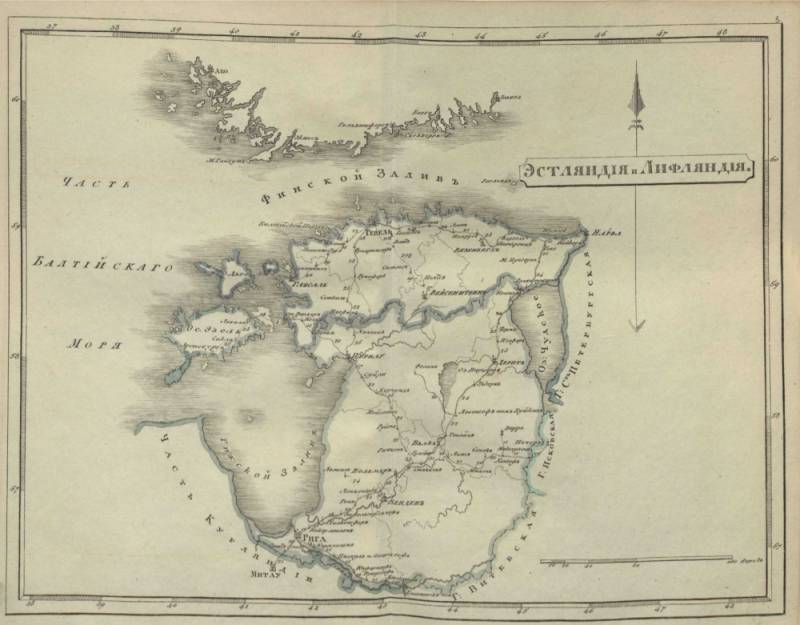 Map of Estland and Livonia 1808
According to Boye, they pursued the retreating enemy three miles to the manor of Aa and captured many Russians and Tatars. However, the Swedes also lost many soldiers. Vasily Rozladin died in this battle. Whether Vasily died in battle or was taken prisoner is not known for sure. There are several versions. 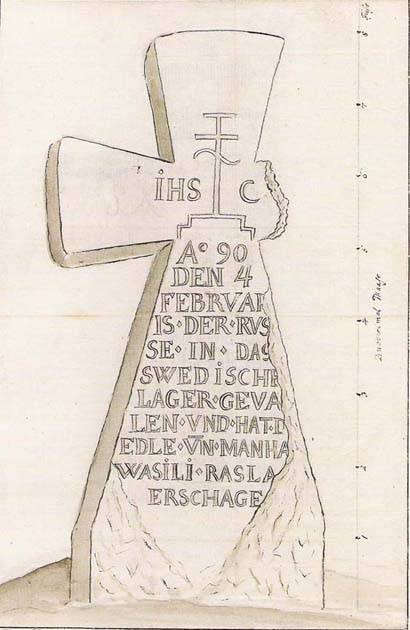 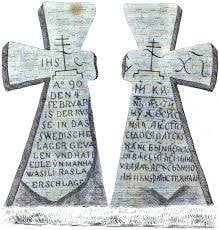 Cross pattern on both sides
Cross made of limestone. On both sides of the cross there were inscriptions in German and Old Russian. The inscription, in German, stated that

"On February 4, 1590, when the Russians attacked the Swedish camp, the noble husband Vasily Rozladin was killed."
The Old Russian text, restored by the professor of philology Alexei Gippius, says:

"In the summer of 7098, on the day of memory of Sidor Pelusiodsky (February 4), the servant of God, Vasily Volodymyr, son of Rosladin, was killed at this place."
With the Russian text, the cross is facing east. This memorial cross was most likely installed by the relatives of the deceased. At present, the outer layer has completely crumbled. It is not known how and when the cross lost one ray, but in the XNUMXth century it was already without it.

Author:
Alexander Asanov
Photos used:
photo from the Internet. photo of my crosses