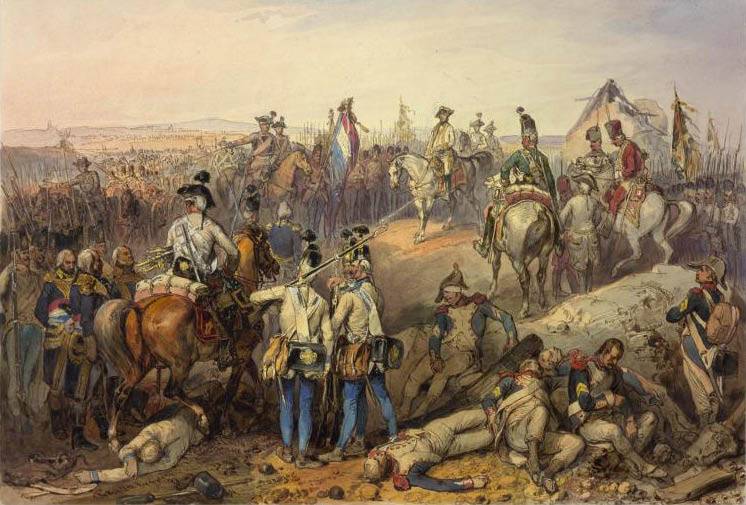 The uniform! one uniform! he is in their old way of life
Once he sheltered, embroidered and beautiful,
Their indolence, the understanding of poverty;
And we are happy for them!
And in wives, daughters - the same passion for uniforms!
("Woe from Wit" A.S. Griboyedov)
Greatest battles in stories. Let us recall the Hungarian series "Captain Tenkesh", which was popular in the USSR in the 60s of the last century. All Austrian soldiers there are dressed in white cloth caftans and black cocked hats. That is, in the era of Peter the Great (and the action of the series refers precisely to this time), the Austrian army already wore white uniforms, which did not differ in any way from the uniforms of England, France and Russia. 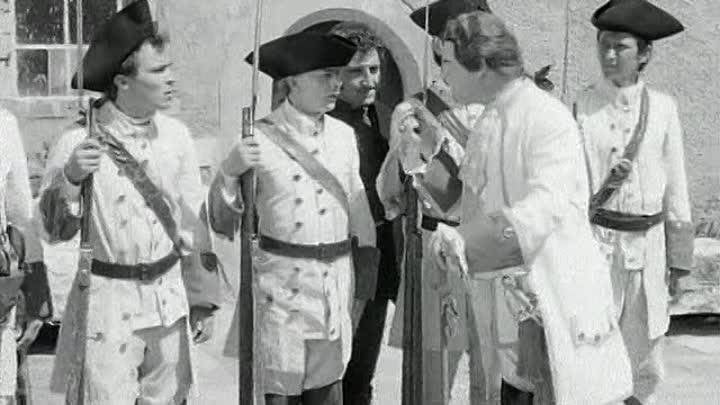 Soldiers of the Austrian army at the beginning of the XNUMXth century. Shot from the movie "Captain Tenkesh"
Well, since 1718, the white color of the uniform has finally become the hallmark of the Austrian army, like red - for the British, blue - in France, and green - in Russia.

Its recognized multi-ethnic character was also an important feature. Therefore, the regiments of the Austrian army were divided into German (recruited in German-speaking lands) and Hungarian - eastern (including the troops of Croatia and Transylvania), which was also reflected in the uniform. 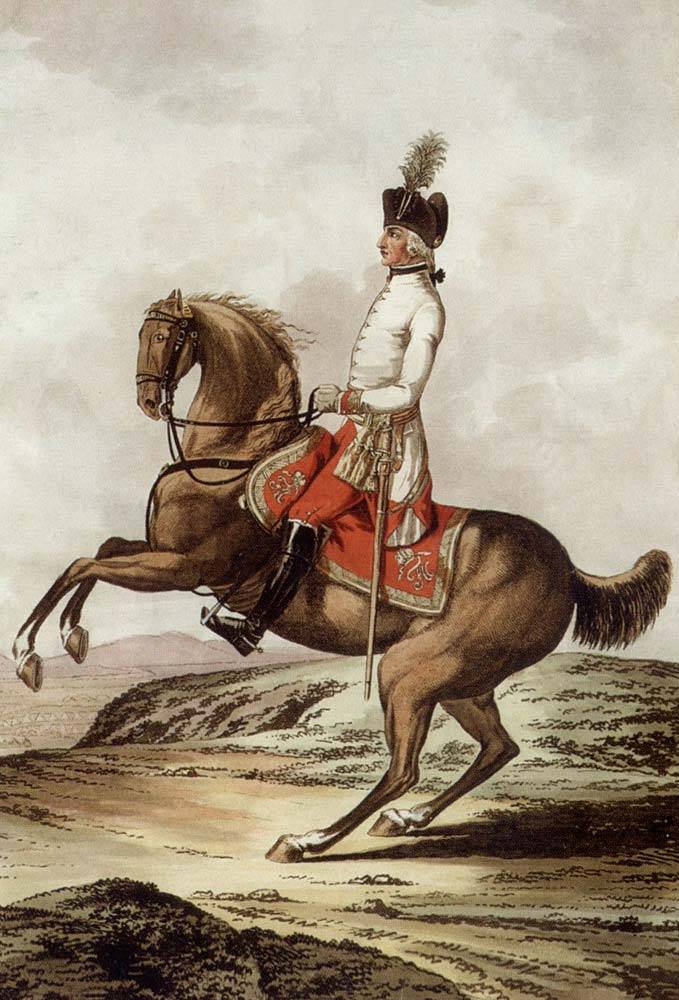 General of the Austrian army
Reforms associated with the wars of the era of the Napoleonic wars in Austria were started as early as 1798.

And since 1801, they were actively implemented by the Austrian Archduke Karl, who became president of the Hofkriegsrat and field marshal. They ended by the spring of 1804, that is, just before the very beginning of the war with Napoleon. But even in this case, it matters to us how much they transformed the Austrian army.

And here it should be noted that it all started just with the changes in the uniform. 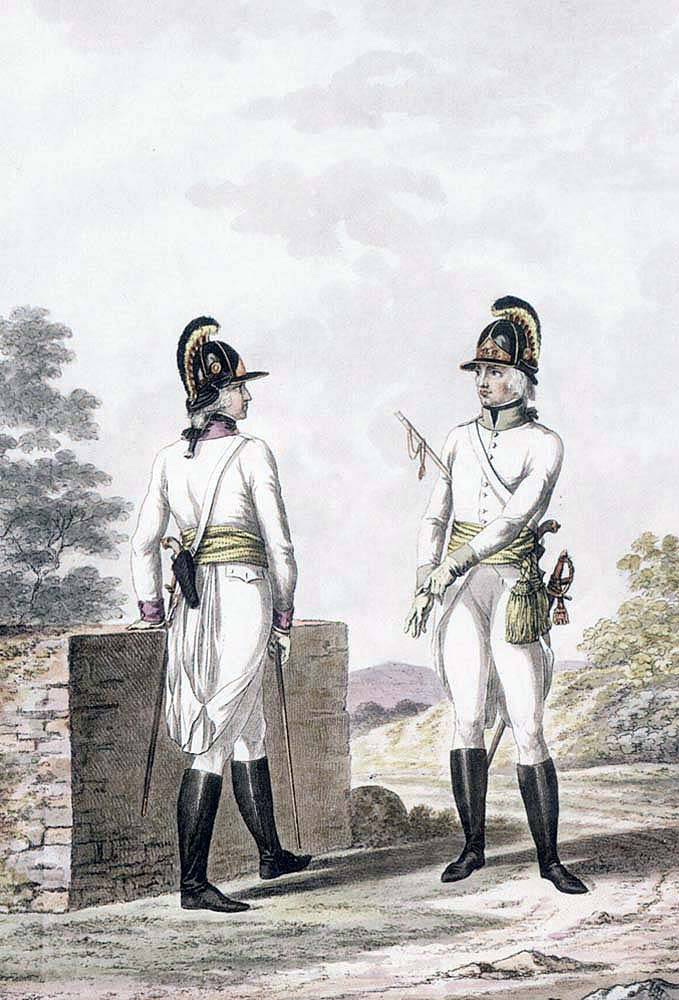 Officers of the German Infantry Regiments: 16th Baron Terzi and 28th von Fröhlich
And already in 1799, the Austrian regiments, dressed in new uniforms, together with the Suvorov troops fought in Italy and Switzerland, fought with Napoleon at Marengo and against Moreau at Hohenlinden in 1800.

Even A.V. Suvorov, appointed commander of the united Russian-Austrian army in 1799, did not at all disdain to wear the uniform of the Austrian field marshal general. 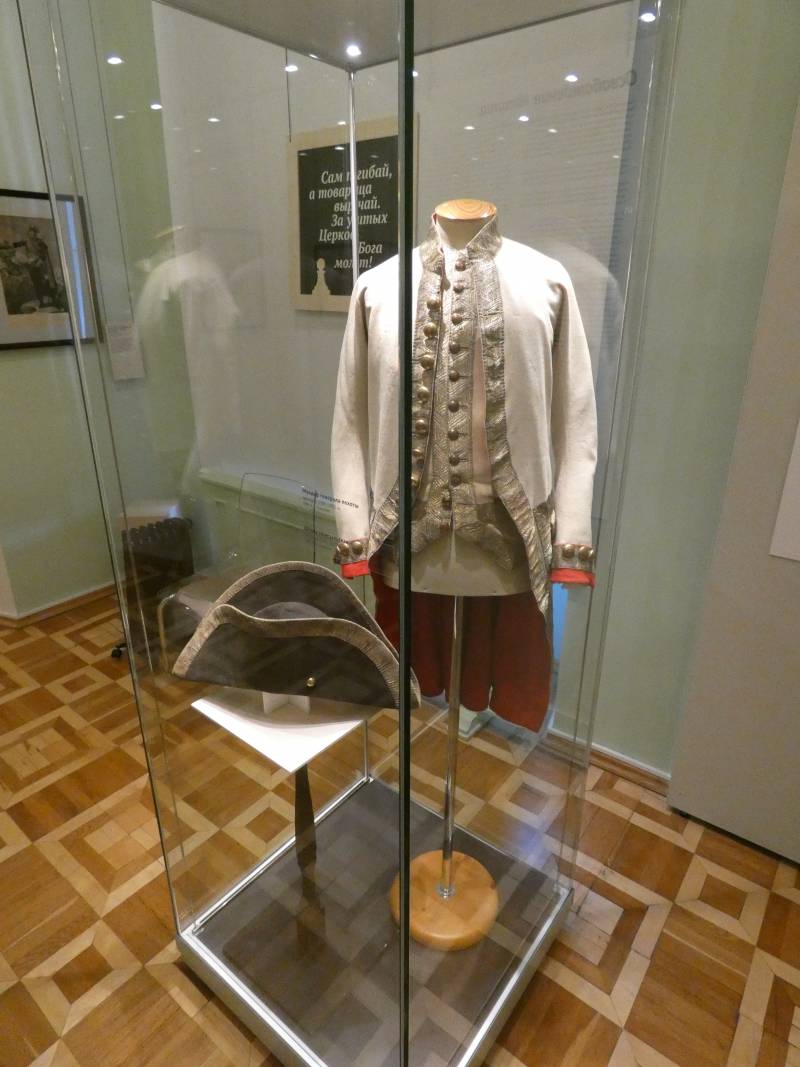 Tunic and hat of the general of the Austrian army 1780-1800 State Historical Museum A.S. Suvorov. Photo by N. Mikhailov
And yes. They really transformed her.

For most ranks of the infantry, cavalry and artillery, helmets and single-breasted short-cut uniforms became the main headgear.

Their color determined their belonging to the branch of the army: the white color, traditional for the Austrian army, was adopted in the infantry and for cuirassiers. The uniforms of gray color were received by foot and horse rangers. Dragoons are green. Brown was given to the gunners. And gray-blue - assigned to the Corps of Engineers.

Among themselves, the shelves were distinguished by colored collars, cuffs on the sleeves, cuffs on the folds of uniforms and the color of the metal buttons. 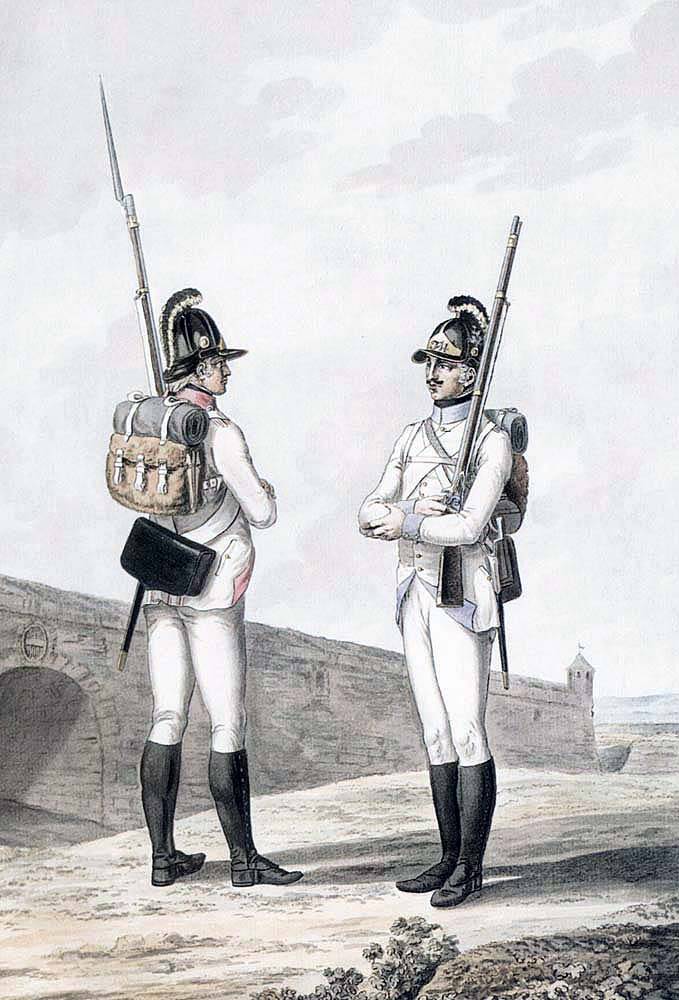 Fusiliers of the 38th Regiment of the Duke of Württemberg and the 4th Regiment "Deutschmester"
The wide-brimmed caftans of previous years in the army were replaced by economical tailcoat-cut jackets, which had short coattails and lapels only in the front in the form of triangles in the color of instrument cloth, which gave the Austrian infantry uniform a very characteristic appearance.

Buttons - both "white" and "yellow" metal. The shoulder straps for holding the harness belts were also instrumental in color, and the belts themselves were white. Backpacks - made of cowhide with fur outside, fastened with three white belts. An overcoat of gray cloth was also worn by a soldier in a roll. But not over the shoulder (as in the Russian army), but over the knapsack over the shoulders.

In addition, the soldier carried a water bottle and a cartridge bag in a sling. 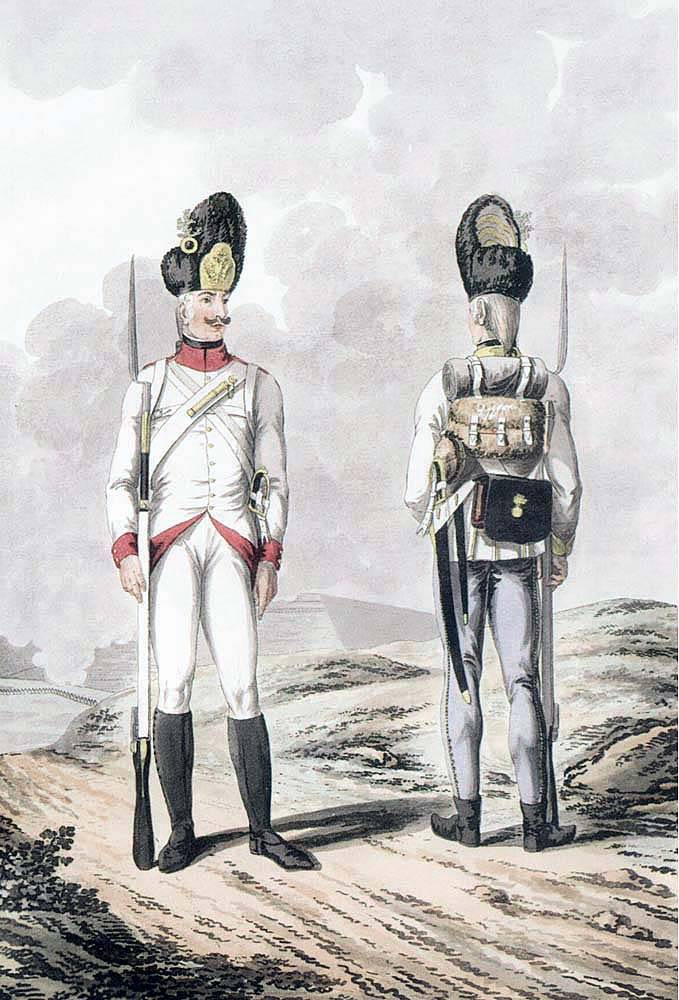 Grenadiers of the infantry regiments of the 1st German regiment of Emperor Franz II and the 2nd Hungarian regiment of Archduke Ferdinand
Culottes and fusiliers and grenadiers were worn rather narrow, white. And below the knees - black leggings and shoes. 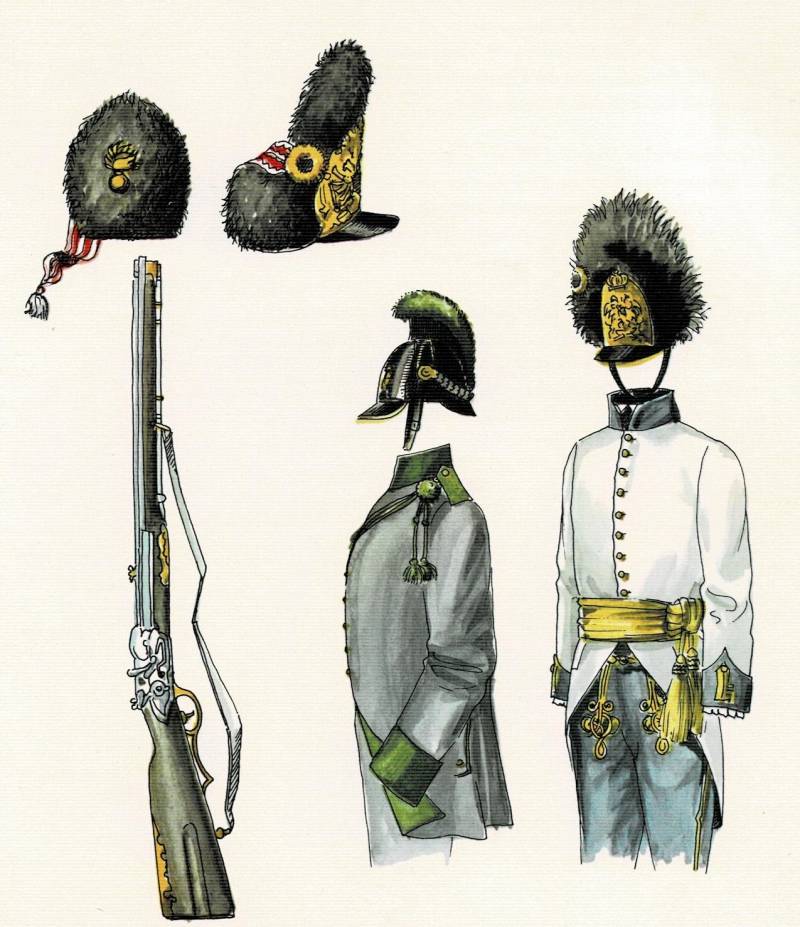 Items of uniforms and weapons of the Austrian army of the time of Austerlitz (from left to right): grenadier (1a) 1750; grenadier (1b) 1805; jaeger gun (3) 1805; jaeger uniform (2) 1895; officer's uniform of the Hungarian grenadiers (1) 1805 Illustration from the book: Uniformen euroaischer Armeen / Von Ralf Swoboda / DDR, 1978. Р.147
The leather helmet, which has become the main headdress of Austrian fusiliers and dragoons, was developed on the basis of antique designs. And it was a leather hemisphere with a crest also made of leather 4 cm high with a woolen yellow-black narrow plume. She had a long visor in front and a short one in the back. It was also reinforced in front with a brass strip with the monogram "FII", and on the head it was fastened with a leather chin strap. Officer's helmets were adorned with gilded metal trim and a beaver plume. 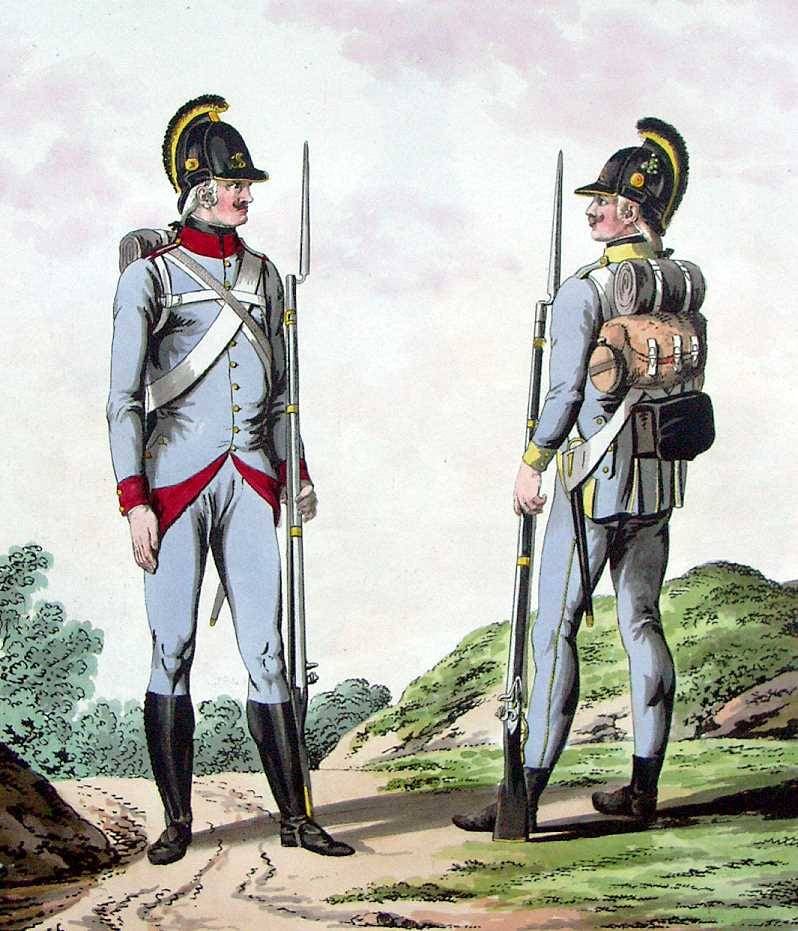 Privates of the light infantry. They wore a jaeger uniform, but armed with smooth-bore guns and were listed in the jaeger regiments
The grenadiers (both privates and officers) had uniforms in cut and color that were the same as the fusiliers. But they differed in a headdress: a fur hat and front and back visors, and a forehead plaque with an imperial monogram. Interestingly, the "grenadier" could also be covered with a special cover, on which an image of a burning grenade was placed in front between the letter "F" and the number "II".

Jaegers received a gray uniform of the so-called "pike" color with black belts, "yellow" buttons and a helmet with the monogram "FII", otherwise identical to the form of fusiliers. Since the rangers' guns were short, they were supposed to have bayonets-daggers. 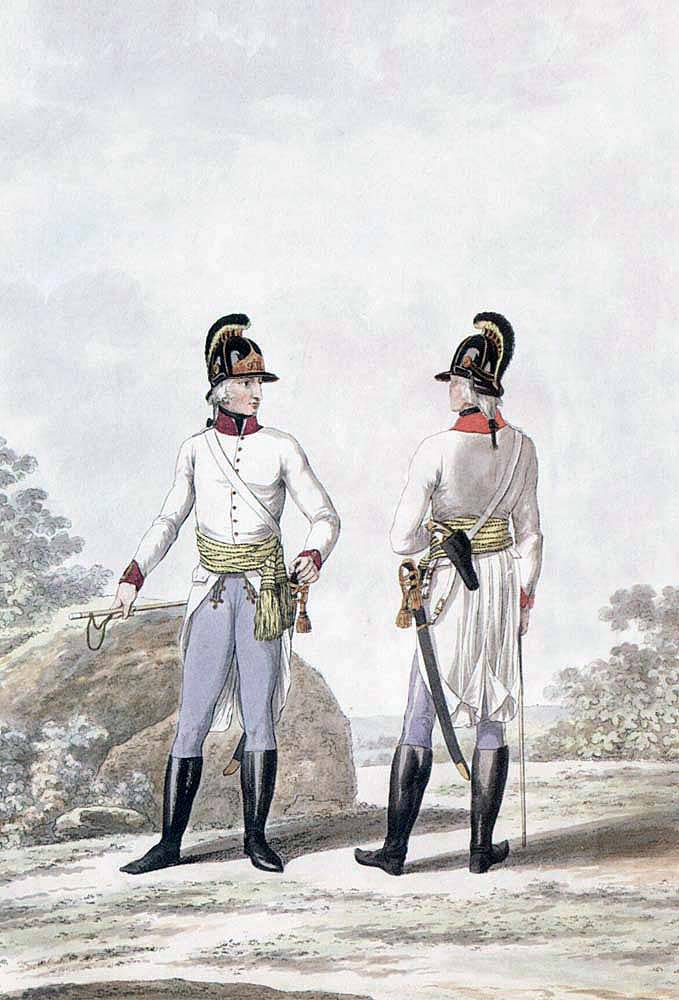 Officers of the Hungarian Infantry Regiments of the 52nd Regiment of Archduke Karl and the 34th Regiment of Prince Anton Eszterhazy
The "Hungarian" infantry, which outwardly differed greatly from the "German", had characteristic national differences.

First of all, instead of white culottes with black leggings, the "Hungarian" infantry had light blue tight leggings with yellow-black piping on the outer side seams and paired "Hungarian knots" on the front of the leggings.

Pointed cuffs of “Hungarian” uniforms (as opposed to straight “German” ones) decorated the “bear's paw” buttonholes. The shoes of the "Hungarian" infantry were practical ankle-length boots tied with laces.

In some shelves, the uniforms were not white, but brown. And instead of helmets, they wore shako, very similar to the shako of the Russian infantry with the same black and yellow cockade, but only without a brush.

The uniforms of the officers were similar to those of the soldiers. But they were distinguished by magnificent belt scarves of black and yellow silk, ending in tassels. 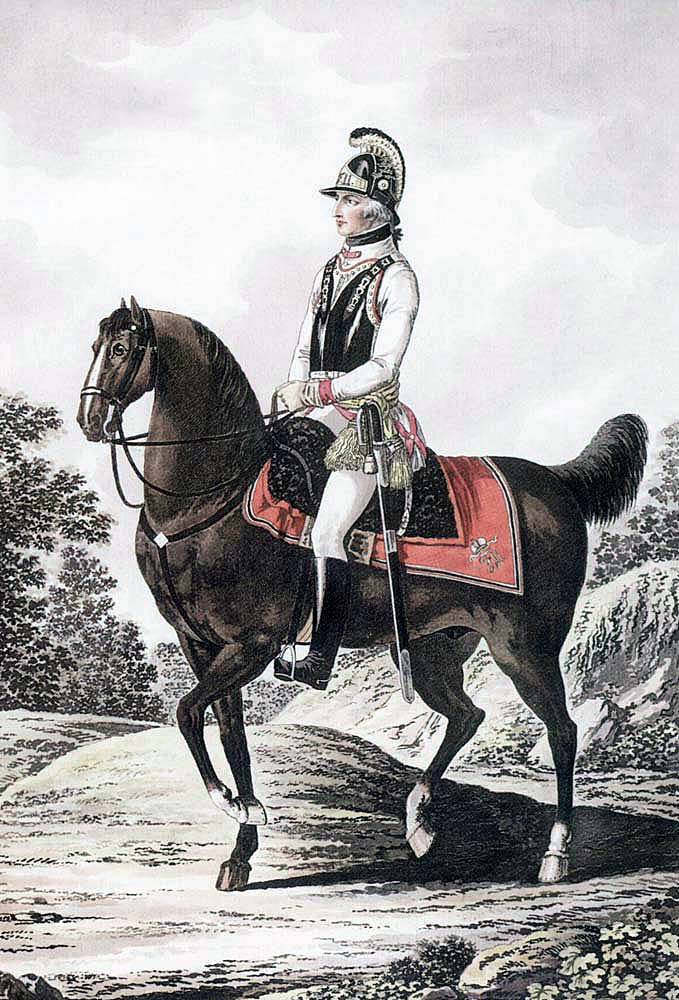 Officer of the 1st Cuirassier Regiment of Emperor Franz II
In order to preserve their expensive and easily soiled white uniforms, the Austrian infantry officers made it a fashion to wear gray frock coats.

According to the charter, they could be put on under an overcoat, that is, in bad weather and cold weather or during a campaign. But the officers turned these coats into their everyday clothes both in the ranks and outside the ranks. And they kept their snow-white uniforms for parades.

In addition, the officers of the "Hungarian" regiments could be easily recognized by their sabers. 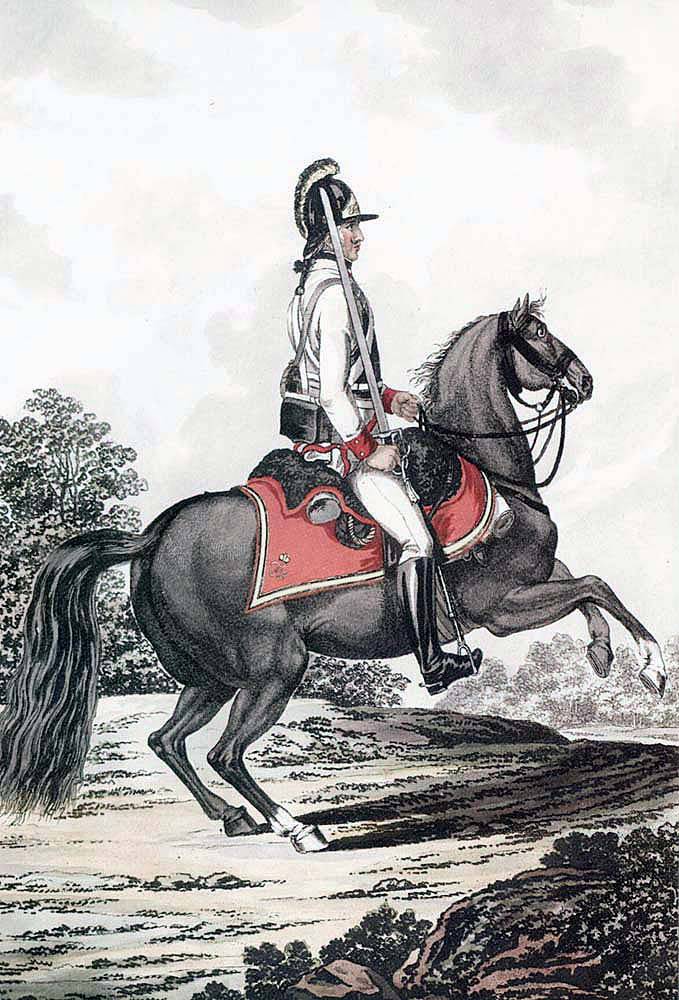 Private 1st cuirassier regiment of Emperor Franz II
The gunners had infantry uniforms, but brown. And a two-cornered hat as a headdress, which for some reason was worn obliquely - one of the corners forward, but shifting it about 30 degrees to the left. 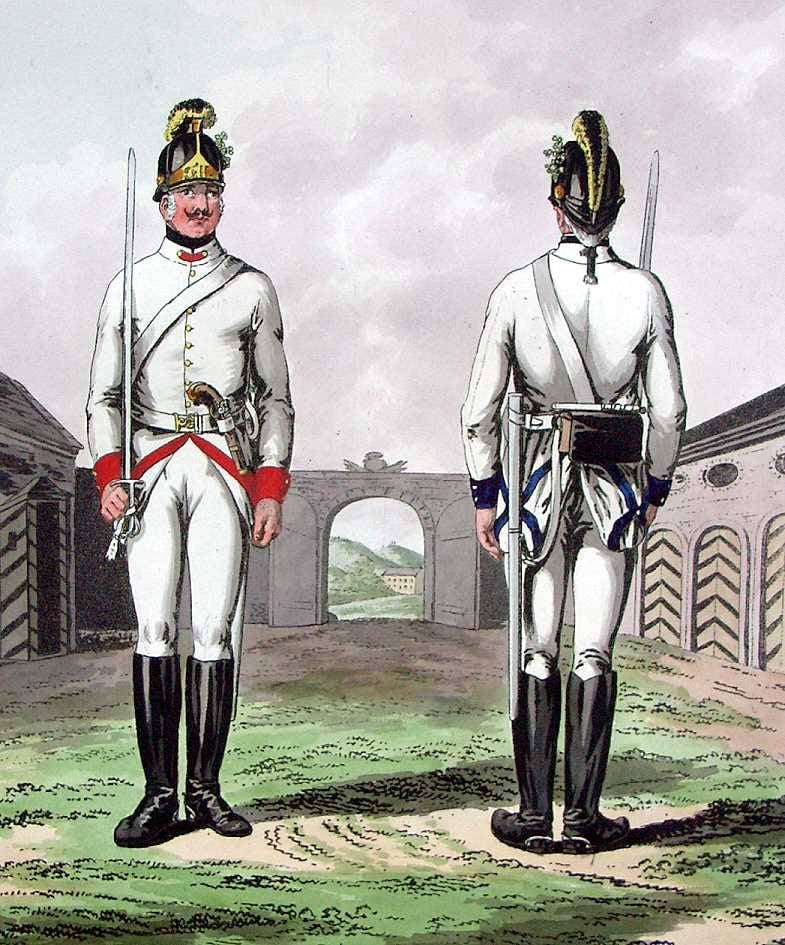 Dismounted privates of cuirassier regiments
The cavalry uniform was white - uniforms. And gray trousers with buttons at the seams. Helmets - infantry model. With a very moderate "caterpillar", in contrast to the similar "decoration" on the helmets of our cavalry guards, dragoons and cuirassiers.

The Austrian cuirassiers wore black (painted with paint) cuirassiers, which favorably differed from the Russian "disarmed" cuirassiers. Although they did not have the back parts of the cuirass either. Only bibs. The comb on the trumpeter's helmet was red. 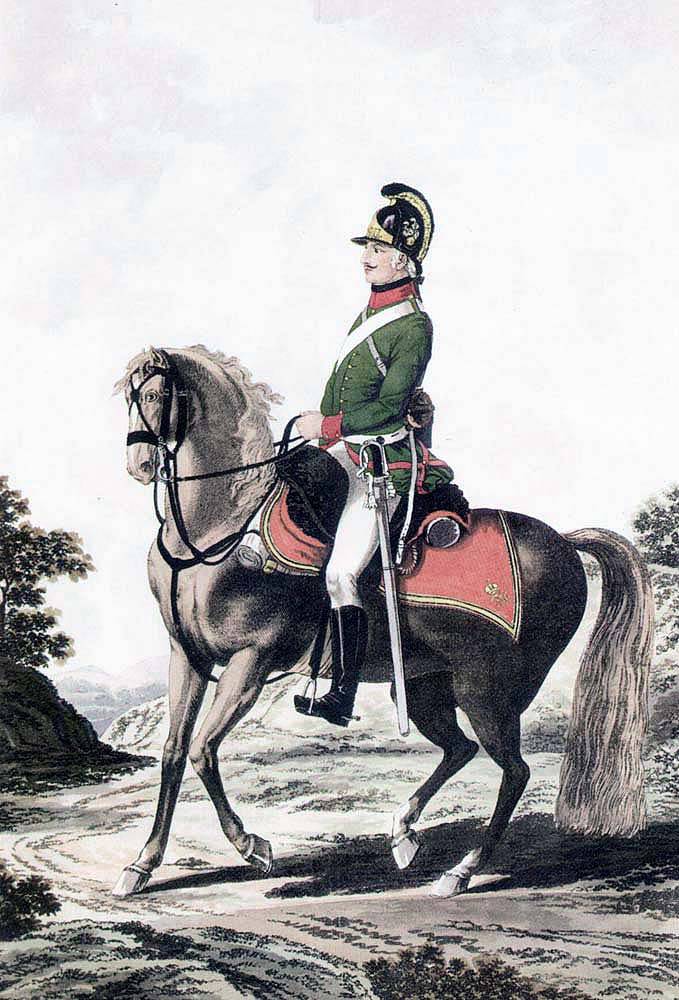 Private of the 1st Light Dragoon Regiment of Emperor Franz II
But if someone in the Austrian army (in terms of the colorfulness of uniforms) was lucky, it was the hussars and lancers. Red, blue, black chikchirs (although they also wore gray trousers on the hike). And the same dolomans and mentics, richly embroidered with "Hungarian cords". Red tashki and saddlecloths with the monogram "FII". Two-tone black and yellow sultans on shako. 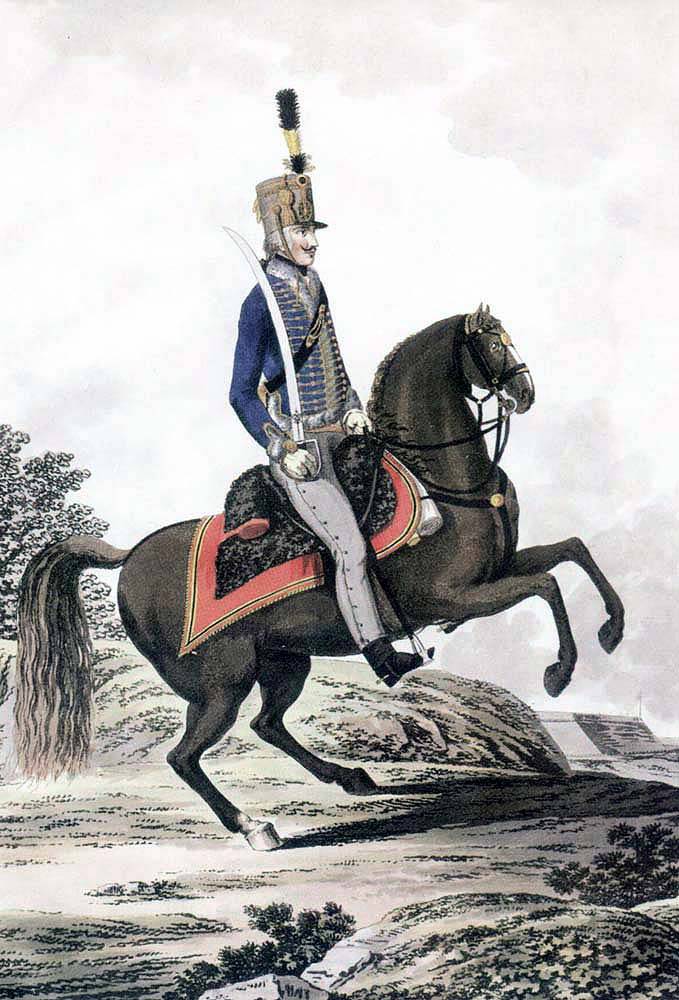 Officer of the 3rd Hussar Regiment of Archduke Ferdinand
Lancers - in the traditional Polish-style Uhlan uniform: in green and red uniforms. Moreover, the regiments differed only in the color of the confederate lancers. One regiment had a yellow top, the other green. The weather vane on the peaks of the two "imperial" - black and yellow - were the same in all regiments. Paddles - as in the hussar regiments, but with rounded corners. 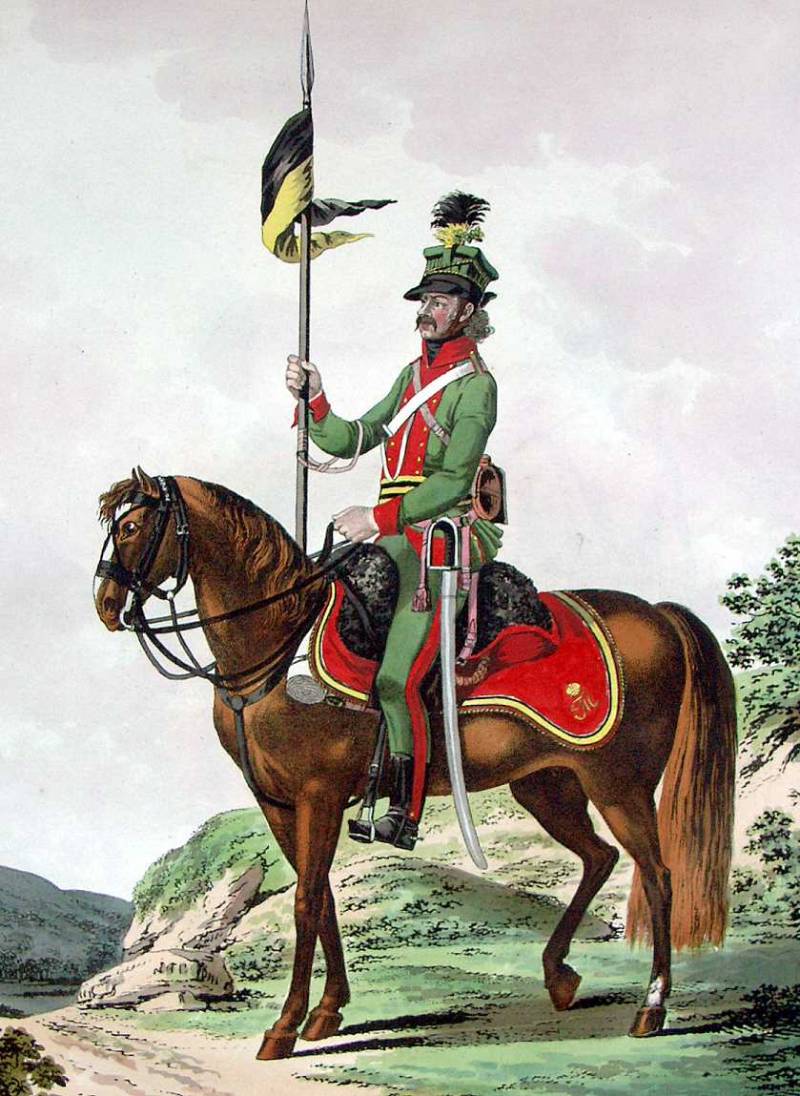 Private of the 2nd lancer regiment "Schwarzenberg"
As for the hairstyles, the famous 5th century braids were first shortened to 12,5 inches (XNUMX cm). And the bouclie was completely canceled.

The hair at the temples was now combed back to the back of the head. And that was where it all ended.

Although the powder was still left as an element of the ceremonial uniform.

And in 1805, the braids were also abolished.

In conclusion, we note that in the uniform of the 1798 model, the Austrian army fought not only at Austerlitz in 1805, but also at Wagram in 1809.