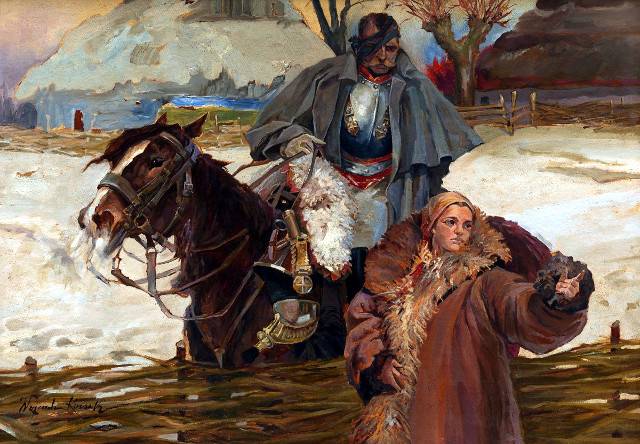 The wounded cuirassier and the girl. Painting by Voychech Kossak.

Despite all the qualifications and dedication of many doctors and surgeons, such as Percy, Larrey or Degenette, in general, the medical staff was not able to take care of the wounded and sick French soldiers and the proper level, which led to unreasonably high sanitary losses. Inadequate organization of hospitals and the subordination of the medical service to military officials, who were more concerned with improving personal well-being, caused high mortality in hospitals among the wounded, who could be saved in better conditions. Thus, experienced soldiers were constantly leaving the Great Army.

This state of affairs was largely the result of the attitude of Napoleon Bonaparte himself towards his subordinates.

He trusted military ordinators and commissars too much, and seeing excellent and dedicated doctors around him, he believed that there was also a medical service on the ground.

The Emperor of the French is no doubt responsible for the abandonment of many medical service reform projects. Later, already in exile on the island of St. Helena, he himself admitted that he was not interested in the fate of the soldiers who, due to their wounds, could no longer serve and participate in military campaigns.

The cardinal mistake of Napoleon was the belief in the "inexhaustibility" of the human resources of France and the allied or conquered countries. However, very soon it turned out that the senselessly high losses caused not so much by death on the battlefield as by the catastrophic state of medical care (or the complete lack of it) led to the fact that old, experienced veterans after 1809 became a rarity in the Great Army. This, accordingly, affected its combat effectiveness.

The shortage of qualified medical personnel had the same effect. It is a vicious practice to dismiss experienced doctors from the army in peacetime. And the almost widespread neglect of medical education.

Another reason for the weakness of the medical service and its dangerous consequences has been chronic shortages in the supply of medicines, dressings and equipment.

The military administration, whose task was to plan in advance (even before the outbreak of hostilities) the needs of field hospitals, in principle, limited supply to the required minimum. Because any cost savings gave the ordinators and commissioners additional profits.

The line regiments did not even receive the regular number of "volatile ambulances", and the surgeons assigned to the line regiments often had nothing to treat and operate on the wounded. In addition, ambulances, simply due to a shortage of horses or by direct order of military commissars, appeared on the battlefield with a one or even two days late, which was also justified by "economy".

This happened, for example, near Borodino, when thousands of wounded for two days and two nights in vain awaited evacuation to the hospitals. In the battles near Ostrovna and Vitebsk, the surgeons had nothing to bandage the wounded with. And they used underwear instead of bandages.

These and other shortcomings of the medical service manifested themselves especially dramatically during the retreat from Moscow, when surgeons and doctors could rely only on personal sanitary bags.

Further, one should mention such a factor of weakness of the medical service as the absence of a system for evacuating the wounded.

In all campaigns in which the French army was forced to retreat under the onslaught of the enemy, she had to leave hospitals and infirmaries at the mercy of the enemy. Because there was not only enough time, but also vehicles to evacuate them.

This was first seen in Spain. But since that war was not maneuverable, its experience was neglected.

This turned into a disaster in the Moscow campaign. When leaving Moscow, the French left most of the wounded in the burnt Russian capital. Because, as a rule, they preferred to load the wagons with loot, and not to deal with the wounded and sick.

Those who, in spite of everything, were evacuated to the west, reached Vyazma, Smolensk or Orsha, where they were left anyway. Because the death of horses began, and the carts were chopped up for firewood. And because it was necessary to carry out the orders of Napoleon and his marshals, who believe that the carts with the wounded only burden the retreating army.

However, leaving Moscow and not wanting to admit his defeat, Napoleon deceived his entourage that they were only carrying out a planned retreat to winter apartments "only to Smolensk" or "only to Minsk." And he deliberately hesitated with orders to evacuate hospitals, which were scattered along the entire route of retreat of the Great Army.

Although it was time to evacuate the wounded from Smolensk, Borisov and Orsha, the French made no preparations for this.

For the ordinators and commissars, the surging crowd of emaciated, sick, frostbitten soldiers was not only a big surprise, but also a huge psychological shock. They simply were not able to evacuate the hospitals under their control, due to their own flawed "effective" management.

However, even those scarce resources that they had were either requisitioned by the highest ranks, or simply captured by gangs of marauders who were no longer commanded and who no longer listened to anyone's orders.

The evacuation could not be carried out even in Vilno and Kovno. That is, on the westernmost border of the Russian Empire and in areas that were affected by the military devastation to the smallest extent.

All this has already manifested itself in Spain. On a smaller scale, but in much more brutal conditions. After the defeat at Albuera on June 17, 1811, the wounded had to be abandoned, who were immediately slaughtered by the brutal Spaniards and Portuguese.

But even the victorious battles at Okanya and Almonacid in 1809 turned into a bloody massacre of the wounded, who were not provided with timely transport or sufficient protection from the Spanish rebels. The wounded Polish light cavalry, who decided the outcome of the battle at Somosierra and ensured the successful outcome of the first stage of the Iberian War, lay for several days practically without medical assistance in the town of Buitrago in constant fear of local marauders and peasants, until they became interested in their fate and evacuated to nearby Madrid ...

Once again, it is worth emphasizing the dedication of doctors and surgeons. Especially those who stayed with the wounded when there were not enough vehicles to evacuate them to hospitals, and shared their fate. At best, it meant captivity. But in Spain, mass killings of the wounded (along with their caretakers) were in the order of things.

In addition, epidemics were a big problem in hospitals due to the deplorable state of hygiene, the scandalous attitude of the staff and the indifference of the commissars to the fate of the wounded.

In December 1805, typhus appeared in Brunn's hospitals, which, along with the evacuees, spread to Germany and France.

Typhus became a real scourge of French hospitals in Russia, especially during the retreat. Of the 25 thousand wounded and sick in Vilna hospitals, only 3 thousand survived. In Danzig, besieged in early 1813, 6 soldiers died of typhus.

Typhus was massively manifested in Germany during the war of the Sixth Coalition of 1813–1814. For example, in Mainz, out of 4500 wounded and sick from typhus, about a quarter died. And in the besieged Torgau, 25 soldiers and officers of the 13448-strong garrison died of typhus.

In overseas expeditions, the French army was exterminated by the plague.

The French first encountered it during the Egyptian and Syrian campaigns. In Jaffa, several hundred of Bonaparte's soldiers were infected with the plague. And most of them died in terrible agony. The plague became truly exterminating during the battles in Santo Domingo, where it carried away several tens of thousands of soldiers and officers, including the commander-in-chief, General Charles Leclerc.

The plague appeared in the European theater of war in 1812 in Spain. But the chief surgeon Jean-Pierre Gama quickly took vigorous measures, ordering the isolation of the plague regiments and the burning of all objects that the plague ones touched. Thus, only 60 soldiers fell victim to the plague.