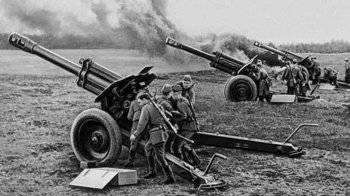 When they begin to compare our army with the American and other armies of the world, I always remember history, which occurred during my service in the group of Soviet troops in Germany about thirty years ago.

In the seventies, it was decided to organize competitions of friendly armies. I served then in artillery, and once I had the opportunity to attend the championship, which was held between our unit and the fraternal German, which was armed with the same guns and tractors.

In addition to general running and shooting, the program included the following exercise: the tractor, leaving the original and driving 50 meters, should turn around so that the gun looked towards the enemy, the calculation jumps off the tractor, unhooks the gun, uncovers, spreads the support beds, leads to the target, charges, produces a shot, which must hit the target. Standard for all - 45 seconds. Boundary for this exercise alone, therefore, performed in turn, who quickly - decided to stopwatch. By lot, first the Germans, then ours. Both units are present, they support their own.

Stopwatch clicked. The Germans have gone. Act clearly, admiring. Traction jumps to the position. The officer stands on the sidelines with binoculars, without interfering in anything. The sergeant gives the command, the soldiers act like machine guns, the beds are spaced apart, the covers are removed, the projectile in the barrel. Shot. Target struck. 41 second. The Germans rejoice. On 4, the seconds have blocked the norm! the result is excellent.

Now ours. The tractor flies to the position, the gun almost falls over when turning, gets up on one wheel, thinks for a moment - to fall on its side or back to the working position. Carried - fell as it should. Calculation of the crowd runs to her. The sergeant is handing out kicks, the officer grabbed the frame, dropped his binoculars, which was crushed in the confusion, the mat-remat, charging almost stumbling, in the fall by some miracle sends a projectile to the breech, shot! Target hit. 17 seconds.

That's when I understood why the Germans lost the war. They are not capable of overpower in an extreme situation. And our whole life is an extreme situation, and super-effort is the norm of behavior in war. The stupidity of the generals is always compensated by the heroism of the soldiers. We didn’t provide food - in peacetime we got used to it. Tanks broke through And we will abandon the reconnaissance under these tanks. No one to go into intelligence? Scouts under the tanks died? Volunteers - two steps forward! Here is such a Russian style of martial art.

In which army of the world is military business still set? Germans are a disciplined nation, love and know how to fight. And the Americans where to climb? it is enough to recall the rebellion of the American marines in Somalia. They refused to go to military operations until they received bio-toilets. The requirements are absolutely fair. Field toilets of our type in the tropics - the direct road to the epidemic. And Americans love to live. But to imagine that the Russian marines refused to go into a military operation, for whatever reason (not to mention such a curious one), I cannot in a nightmare. And I hope I do not live to such a time when our soldiers and officers will look like American ones. About the generals, the conversation is special ...