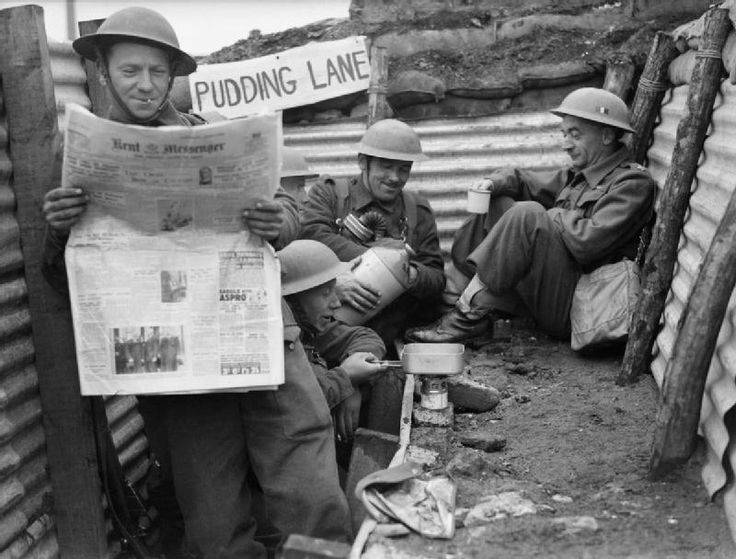 "Strange war": the Germans were surrounded, now is the time to eat and read the newspapers

The "Strange War" is commonly referred to as the campaign on the Western Front from September 3, 1939 to May 10, 1940. So it was called by the French journalist Roland Dorzheles, and in the USA and Great Britain it was called Phoney War - "fake war". After the French offensive in the Rhine Valley in September 1939 and the German counteroffensive in October 1939, calm was established on the Western Front, as if there had been no war.

Without much exaggeration, mountains of literature have been written about this "strange war". And almost all of it is of a denunciatory nature, one way or another accusing France and Great Britain of passivity while Germany was crushing Poland, then Denmark and Norway. Like, it was necessary to rush forward, into the offensive, and then Germany would be defeated.

All this, of course, is good. But it smells badly of afterthought when the grades historical events are done in terms of what happened next. Of course, from the point of view of the entire subsequent course of World War II, it would be more profitable to strike in 1939 with some chances to overthrow Germany at the very beginning, before the war broke out. Only the commander-in-chief of the French troops, Army General Maurice Gustave Gamelin, did not know what would happen next. Therefore, he had nowhere to take arguments for a decisive impulse.

In addition, it is worth emphasizing that mistakes and failures are almost always natural and are rooted in certain features of assessing the situation and ways of making decisions. In other words, the French and British in September-October 1939 believed that they were making the right decision, refusing to take active actions of the ground army. Historians needed to find out why they thought so, and not engage in accusation in the pose of an all-knowing oracle.

Documentary finds show that there was a logic behind it, and indeed the British and French had reason to think they had a better plan than a large-scale offensive.

Better to choke than to beat

It is better to study the plans of the French leadership on the basis of French documents. However, in the summer of 1940, the Germans seized quite a lot of French documents, studied them for a long time, translated them into German, and such translations ended up in the funds of many German authorities. For example, information on the import of raw materials, which was in the captured French documents, fell into the Reich Ministry of Economics.

From a rather large, several dozen sheets, collection of such documents, one can see that the French, with the beginning of the war, tried to compile as complete a picture as possible of Germany's consumption of military-significant raw materials and the sources of their receipt. This information was collected and processed in the military department of the Ministry of the Blockade of France (created on September 13, 1939; the British Ministry of Economic War was formed on September 3, 1939). They compiled information in tables, one of the examples of which I will give below (RGVA, f. 1458k, op. 3, d. 474, l. 63). 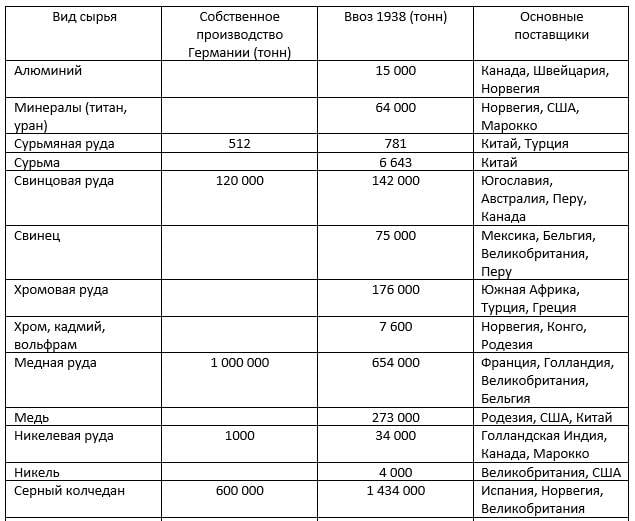 And what conclusion could be drawn from this and other similar tables? Only the fact that the German economy does not actually have a domestic production of military-significant raw materials and depends on imports for their consumption.

From this it followed, firstly, that with the declaration of war by France and Great Britain, Germany would lose primarily supplies from these countries and their colonies. Secondly, due to the fact that almost all imports are delivered to Germany by sea, it is possible to cut off supplies from neutral countries by establishing a naval blockade of the North Sea and establishing control points for merchant ships.

If Germany gets an economic blockade well enough, then after only three or four months Hitler should ask for peace. A land attack on Germany, from the point of view of this approach, looked unprofitable both because it would have been a significant expenditure of military resources and reserves, and because extremely small losses would quickly persuade Germany to peace and accept Anglo-French conditions.

Thus, the strangulation of the economic blockade was the very plan that looked better than a large-scale offensive with some chances of a repeat of the massacre at Verdun. Still, one must take into account the important circumstance that at that time the "blitzkrieg" was not yet a usual option for waging war, and therefore the idea of ​​an offensive was inevitably associated with the offensives of the First World War - large, bloody and stupid. The reluctance of the French to try the German "Siegfried Line" for strength was dictated by considerations such as: once you get in, then you will not get out.

And, then, the French remembered well that Germany at the end of the First World War was the victim of economic exhaustion. And then they had an ally in the person of Austria-Hungary, vast occupied territories in the east: Poland, the Baltic states, in 1918 Ukraine and Crimea. Now, that is, at the beginning of the war in 1939, Germany had none of this, and therefore the plan to strangle Germany with a blockade only looked even more realistic.

In September 1939, Germany occupied Poland, but in France and Great Britain it was decided not to derail the blockade, again because the method promised a result under these conditions, because it happened in the First World War. Their position was absolutely logical.

Why didn't the British and French succeed?

There were several reasons.

Firstly, in Germany, within the framework of a four-year plan, production facilities were created that greatly weakened the dependence on imports of a number of military-significant raw materials, especially oil products, rubber, iron ore, textile raw materials, and non-ferrous metals. Although the four-year plan was carried out in front of the whole of Europe, there was apparently no exact information about its nature in France and Great Britain.

Secondly, during the pre-war months, a significant stock of imported raw materials was accumulated, which made it possible to survive the blockade for about a year without any special consequences. In addition, Germany was actively looking for allies with raw materials in Southeast Europe, and also counted on trade with the USSR.

Thirdly, even before the war, measures were prepared to transfer the economy to a war footing, which were introduced a few days before the start of the war with Poland. This followed from the experience of the First World War, in which military-economic mobilization was carried out already during the war and with a noticeable delay; the Nazis decided not to repeat the same mistakes. The transfer of the economy to a war footing made it possible to use the available resources as efficiently and efficiently as possible to supply the military machine, and in this sense Germany was much more resilient against the blockade than it was imagined in France and Great Britain.

Fourth, apparently, there was a serious underestimation of the scope of Hitler's plans. The policy of France and Great Britain as a whole proceeded from the public statements of Hitler himself, in which the emphasis was placed on the return of territories inhabited by the Germans: Saarland, Sudetenland, Silesia, Danzig corridor. That is why the French and British governments reacted so leniently to the partition of Czechoslovakia, believing that Hitler would be satisfied with the solution of these minor issues. Even the attack on Poland did not look like a herald of terrible events; it could be assumed that he would limit himself to the annexation of Silesia and the parts of East Prussia that had ceded to Poland, plant a pro-German government in Warsaw, and that's it.

But Hitler had plans on a much larger scale, plans for a big war with seizures and plunder. These plans were hidden, and Hitler was personally involved in the disinformation. On October 6, 1939, Hitler made a long speech in the Reichstag, in which he spoke about the end of the war, about the need to convene a conference to establish peace and tranquility in Europe, even made a proposal to re-establish the Polish state within new borders, and also that Germany did not has territorial claims against France. 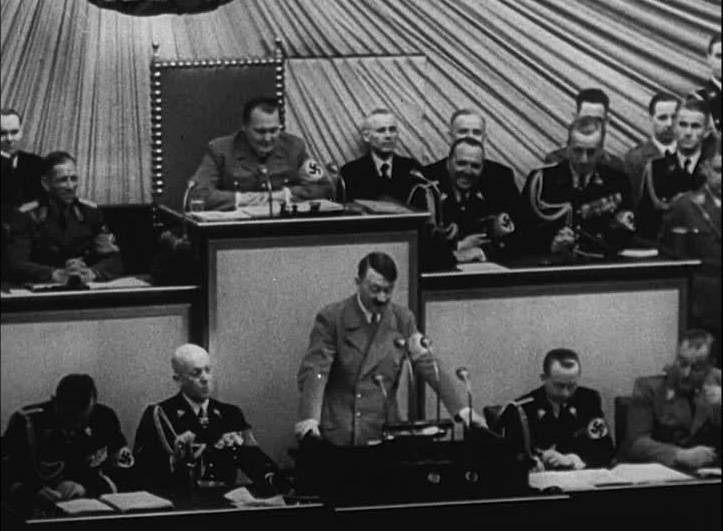 Hitler's speech in the Reichstag
Hitler also stated that the Versailles Treaty no longer existed and Germany had no reason to revise it further, with the exception of the issue of colonies, primarily the issue of the return of colonies to Germany that had been torn away after the First World War.

Hitler announced his readiness for peace talks. Yes, it did not suit either France or Great Britain, but, on the other hand, it reinforced their unwillingness to go over to large-scale ground hostilities. The British and French have clearly decided to leave the blockade, to strangle Germany economically, in the hope that Hitler will either become more accommodating or take steps that suit them. At that time, could anyone have suggested a better solution? Only without an afterthought.