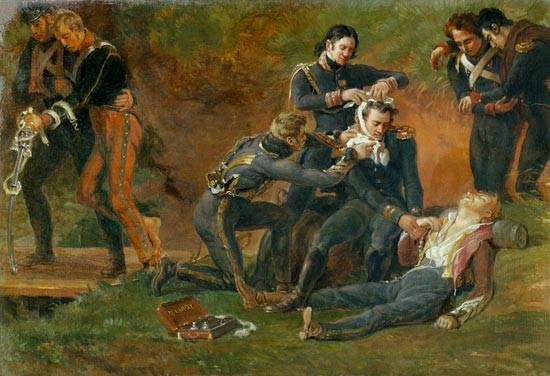 A surgeon bandaging a wounded man on the battlefield. Painting by Louis-Francois Lejeune.

The Napoleonic Wars were the era of the birth of modern military medicine.
This is the third article in this series (read first и the second parts).

First aid to the wounded on the battlefield was provided by battalion surgeons and second surgeons.

Each medical specialist had his own set of instruments and medicines, and each regiment was supposed to have an ambulance carriage for transporting stretchers, a backup set of surgical instruments, medicines and bandages.

Already during the first revolutionary war of 1792, surgeons drew attention to the fact that they should (in the interests of the wounded) ride on horseback, and not march with the entire mass of foot soldiers, carrying heavy bags with medical supplies.

After many kilometers of marches, especially in bad weather conditions, surgeons were unable to provide timely and high-quality medical care to the wounded, whom they often had to carry out of the battlefield on their own during the first revolutionary wars. This required great physical strength. And many doctors and surgeons were not used to such work, as well as heavy loads.

Such postulates, as a rule, remained unanswered or met with resistance from the military command and the administration, who considered it immoral that surgeons ride horses, even when they were equated with officers.

Frustrated by this attitude, the chief surgeon of the Rhine army, Pierre-François Percy, came up with the idea of ​​using charging boxes to deliver medical personnel and their property to the battlefield. In the French army, the charging boxes had an oblong shape, which earned them the nickname sausage, that is, in German "sausage".

On December 31, 1798, Percy demonstrated this kind of modified Wurst to the commanders of the Rhine Army Headquarters. On a box upholstered in leather, up to six people could move, sitting in a row and holding each other, holding on to the belts. The inner space of the box was intended for transporting medical supplies, and a stretcher was attached under the bottom.

sausage he liked the generals so much that they gave Percy permission from the spot to order several dozen of these "sausages." But at the last moment the horses were an insurmountable obstacle, of which six were required for each box.

The military administration immediately protested this "waste". And as a result, "sausages" found only limited use where the commanders of corps and divisions understood the importance of medical service and ordered the allocation of horses for their needs.

All built "sausages" gradually disappeared by 1810.

But during the First Empire, surgeons had already acquired the right to use horses privately. And if they did not have such an opportunity, then the commanders of regiments and divisions on the sly could provide them with horses, knowing that in this way they improve medical care for the wounded.

During the first revolutionary wars, it was also the responsibility of the surgeons to carry the wounded from the battlefield to assembly points, from where they could be evacuated to the rear. Among the military commanders, there was an opinion that under the pretext of rescuing the wounded, soldiers wanted to escape from the front line and, as a rule, did not return there. Hence, there were severe prohibitions to take out the wounded from the battlefield and send assistants from the line units to the surgeons. Surgeons had to work hard to get help in the person of a small number of orderlies.

The already mentioned Percy in 1808, unable to overcome the bureaucracy of the military administration, on his own initiative created a sanitary battalion in Spain from the slightly wounded and disabled, capable of carrying the wounded. The battalion, however, lasted only a few months, but Napoleon, finally convinced of the usefulness of such a service, by a decree of April 13, 1809, created a special corps of military orderlies consisting of ten companies of 125 people each under the command of centurions.

This corps did not yet exist during the 1809 war.

In fact, they began to form it only in the summer, that is, after the end of the war with Austria.

Five companies were formed in France, two in Italy and three in Spain. The tasks of the orderlies were to take out the wounded from the battlefield, send them (after preliminary dressing) to hospitals and protect them from the enemy. Each corps received one company. But in reality they operated in smaller units - two platoons, four squads, or eight sections.

In 1813, a corps of porters was created, for which the word was introduced into French despotats, from famous of the Roman legions milites despotati.

Porters with folding stretchers operated in pairs, and according to the staffing table, 32 such pairs were to be present at each ambulance company.

Neither the orderlies nor the porters were respected by the army. Since they were usually soldiers avoiding the burdens of line service. They viewed their distribution to sanitary companies as an opportunity to survive and enrich themselves at the expense of the wounded.

It happened many times that instead of their direct duties, they were engaged in looting.