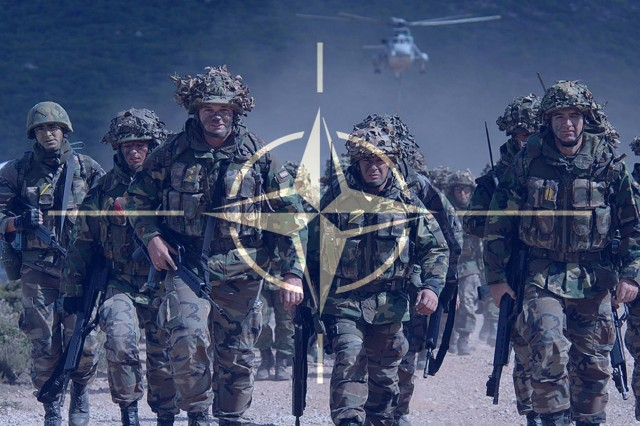 We often write about NATO. Simply because the actions of this military bloc threaten us. Sometimes it is straightforward, as happened with the expansion of the alliance to the east. More often when the bloc is referred to as the basis for the defense of small European states or when NATO forces strike at unprotected or completely unprotected settlements or even countries.


Our negative attitude towards NATO has become traditional. This was largely facilitated by the admiration for the alliance of our former allies from the OVD bloc, who deserted to the alliance after the collapse of the USSR. It is the former allies that are today the most "noisy" supporters and admirers of NATO.

It is difficult to blame them for this. This is the fate of small countries. It is difficult for them, more precisely, it is impossible for them to conduct an independent foreign policy, and therefore they seek "under the wing" of stronger, more powerful economically and militarily states. And in order to get a slightly tastier bone, they have to bark a little louder than the rest.

Have you ever noticed that in our society there is some bias in assessing the opinions of others? Some radicalism? There are two opinions: one is mine, ours, and the second is that of our opponents. At the same time, we completely reject even the good ideas of our opponents. The enemy cannot have competent and correct ideas! It's more convenient for us. There is always someone to blame for our failures. He took us not there. Not Moses ...

Meanwhile, in Western countries, those who research and promote a completely different point of view on some problem feel quite comfortable. Whether it's military or civilian. They do not oppose the government and the state, do not preach any other ideology, they offer a different solution to the problem.

It is this point of view that I propose to consider today. A couple of days ago I came across an interesting article called What Planet Is NATO Living On? (What planet does NATO live on?), Written by American CODEPINK (Code Pink: Women for Peace) activists Medea Benjamin and freelance journalist Nicholas J.S. Davis.

The article was written following the February meeting of NATO defense ministers. More precisely, the new concept of the alliance to build up military power under the brand name of the fight against Beijing and Moscow - "NATO 2030: Together for a New Era." The concept is quite well-known, it is for it that today it is planned to arm the units and formations of the block, change the military doctrine, and so on.

The authors, it seems to me, expressed their main concerns at the beginning of the article. China and Russia are nuclear powers, and the response of these powers to the insolent actions of the United States and its NATO allies can be quite tough. Well, the understanding that in modern war there will no longer be places where you can take a break from the war inspires optimism.

And yet, after a short excursion into history the emergence of the alliance in 1949, the material raises a question that should really arise in most Europeans and Americans. The United States and 11 European countries have created a bloc to confront communism and the USSR as its bearer. How did it happen that immediately after the end of the Cold War and the collapse of the USSR, the alliance became aggressive and brought wars to other countries?

“NATO clearly and urgently needs to reflect on its bloody history. Why does an organization nominally dedicated to containing war and keeping peace continue to unleash wars, killing thousands and leaving countries around the world mired in violence, chaos and poverty? "
Well, and one more accurate conclusion from American journalists. The fact that for the United States, Europeans are just cannon fodder. Just "cattle", I apologize for such a comparison, which is not a pity to send for slaughter.

“Any war between the United States and the Soviet Union or Russia has always put Europeans directly on the front line as combatants and cannon fodder. NATO's main task is to ensure that the peoples of Europe continue to play their assigned roles in America's war plans. "
The authors also disclose the military plans of NATO in relation to China and Russia. Both countries will have to be hit in all areas. Moreover, if for an attack on the Russian Federation, mainly ground and air bombings and missile strikes will be used, then aircraft carriers will become the main ones for the PRC. And after the destruction of the main facilities, armored units invade the territory of both states and act there until Moscow or Beijing admits defeat.

I understand that the plan that I voiced above caused a smile from most readers. Some recalled the "colossus with feet of clay" from the statement of one very aggressive leader of the European people. Some patted the metal of Triumph. Some wiped the triplex on "their" 72nd ... But this is a valid NATO attack plan, codenamed "US Army in multilateral operations" ...

"... Moscow's defense strategy in the face of such an existential threat is not to surrender, but to take revenge on Washington and their allies with a nuclear strike."

The world is changing, only NATO is not changing

Everyone understands that the modern world is different from the one that existed under the USSR. The era of the "Chinese walls" is over. The West's desire to economically tie China and Russia to itself also had a negative side.

This was well noted by the authors of the material in question:

"NATO does not seem to notice the changing dynamics of the modern world, as if it is living on another planet."
In addition, the Americans especially noted the duplicity of the United States and NATO. In particular, they talk about numerous violations of international law by the West.

“NATO tried to forget about the violation of the NATO non-expansion treaty, about the withdrawal of the United States from important arms control treaties, about more than 300 thousand bombs and missiles dropped by the Pentagon and its allies on other countries since 2001, about the wars through US intermediaries in Libya and Syria, which plunged both states into chaos, spawning various terrorist organizations. The "harsh reality of history" of the States speaks of the country as a "serial aggressor."
Summarizing all the above facts, the authors of the article come to the conclusion that it is necessary to dissolve NATO as a military bloc that has fulfilled its original task and interferes with the normal life of Europe, the United States and other countries today.

I deliberately set out in such detail the point of view of Benjamin and Davis on the existence of the alliance. In many ways, I agree with the conclusions made by American journalists. NATO is really more of a hindrance than a help today. And the defense, as shown by numerous exercises, from the side of this block is rather illusory.

Of course, I know that in the ranks of the generals of the alliance there is an opinion about NATO as the most successful military bloc in the history of mankind. And the recent statement of the Commander of the US European Command and the Supreme Commander of the Allied Forces of NATO in Europe, General Tod Walters, I read:

“Russia is the threat to the existence of the United States and Europe. Russia is taking various aggressive actions around the world, despite universal condemnation. "

"Russia is committing malicious actions aimed at destabilizing the whole world, many of these actions are taking place in Europe."

"Russia continues to pose a threat to the existence of the United States and our European allies."
And I will not consider the presented material as a development of the army think tank. The opinion of one, albeit a reputable organization. No more. However, the very appearance of such material speaks volumes. There is a growing understanding in the United States that the existing balance of power no longer corresponds to the tasks set.

And here the dog is buried. I am sure that Pentagon analysts have also studied this article. It turns out that the plan "US Army in multilateral operations" must be changed, recognizing it as inconsistent with the situation and unrealizable in practice. A new plan is needed ...