Why Ukraine is so unlucky with the government 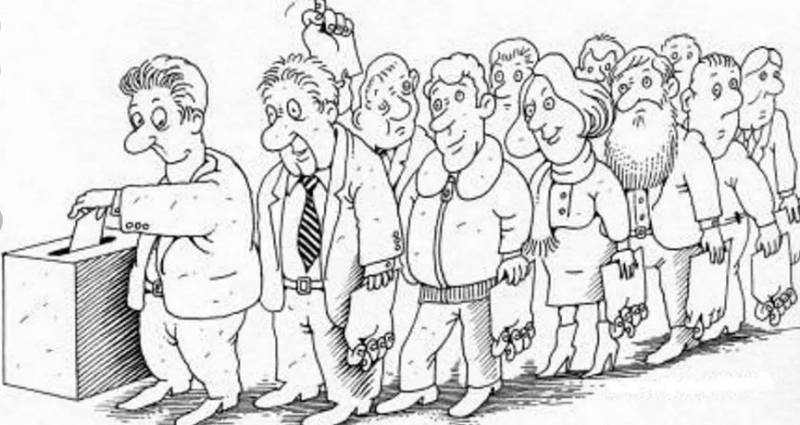 The processes taking place today in Ukraine have become aggravated again, since none of the pressing problems has been resolved (the war in Donbass, astronomical tariffs for housing and communal services, zero vaccination, battles of the oligarchy). And this leads to further degradation of state institutions and society. The clown president takes inappropriate actions and cannot find support not only in society, but even in the current power environment, provoking an inevitable disintegration.

Why is Ukraine again stepping on the same rake? And it ends up at the broken trough? Why did the new persons in power turn out to be as mediocre as the previous ones? And how did this rock hang over Ukraine?

To answer these questions, it is enough to look at the current government there. And make sure that she is. At the head is a clown - a puppet, which the owners pull by the strings, and he unquestioningly performs everything. He is surrounded by people who are far from understanding the fundamentals of government and who are not worthless "managers" who are constantly sorting out relations with each other and striving to sell their powers to the next customer as profitable as possible.

Accidentally in power and having no idea about the management of such a complex mechanism, they personify the face of the ruling regime. And also the degree of degradation of the society that allowed these nonentities to rule themselves.

Of this team, crooks are well known and only a few names are heard. And the rest are gray and nondescript individuals without their own face. They come and go, leaving nothing behind.

Now there is another surge of emotions on the doorstep - a change of government is being prepared. And under the patronage of the Americans, another "savior of the nation" Vitrenko is being pushed into the post of prime minister. He is known for his (together with the head of Naftogaz Kobolev) gas schemes to rob the state. And he seeks to deal with his former boss, demanding his dismissal for corruption.

Where do such rulers come from?

It is well known that the state is ruled not by the people, but by the elite that currently exists in a particular society. The legitimization of the elite in front of society is carried out through the electoral system. That is, a specific elite stratum is imposed on the population in one way or another. And it just kind of "chooses" just her.

The elite cannot be brought in from somewhere outside. It can only arise in the depths of the existing society. And it is formed in response to a public inquiry. What kind of society is such an elite.

Ukrainian society had a request for a "messiah" capable of leading Ukraine to the western paradise. And it received it in its most vile and perverted form.

There is no national elite in Ukraine today. She is entirely comprador and pro-Western. Since the national interests are not formulated in society. And the interests of the owners of the elite are completely different.

No matter how much society strives to replace the elite, it still remains comprador and oligarchic. With each subsequent political cycle, the ruling elite is getting worse and worse. And this curse has long been hanging over Ukraine. Because there is no idea of ​​the existence of this state built on hatred and envy.

The two-headed master of Ukraine

It so happened that the formation of the wretched Ukrainian elite and its selection at all stages were led by two masters - the local oligarchy and the United States.

They did not need a strong state power. The more stupid and venal the elite, the easier it is to manage and direct it in the right direction. The owners selected the elite for themselves, choosing the worst from the worst. As a result of this selection, a worthless ruling class was formed, obsequiously looking at its employers.

Initially, the elite was formed from the comprador Soviet party nomenklatura, who betrayed communist ideals in order to satisfy their ambitions and create their own shtetl principality in order to convert power into property. Kravchuk alone with his "khatynka" is worth something.

Kuchma launched the process of forming an oligarchy. And more cunning robbers pushed the Soviet nomenclature out of power. We formed our own parties. And they themselves became the authorities, nominating their henchmen as "elitists".

At the next stage, the selection of the "elites" was taken up by the United States. They pressed the oligarchs and put their puppet Yushchenko at the helm. But he turned out to be so stupid and incompetent that the oligarchy won a temporary victory, pushing the Donetsk clan into power.

The Americans did not like this very much. And they staged a coup. And their "son of a bitch" Poroshenko stood at the helm. Here, too, they failed: he was too greedy. And he caused fierce hatred of the population, which endangered the existence of a well-functioning system of government. And on the occasion he was replaced by a clown.

Kolomoisky thought he set Zelensky for himself. But I was wrong. A stronger overseas master made him his servant.

The Americans, choosing a team for Zelensky, clearly demonstrated what kind of elite they need in power in Ukraine.

Far from running the state, the clown was selected a team of "managers" from trained "soros", homosexuals, hairdressers and people just from the street, without any experience and knowledge. The oligarchs, within the permissible limits, have added their henchmen. This is the ruling class on behalf of the United States and the oligarchy began to lead the state.

It quickly became clear that a worthless puppet was sitting at the head, surrounded, to put it mildly, morons, controlled and incited by a two-headed master. The population began to curse their idol. And out of thoughtlessness to think about a new "messiah", which will certainly lead the people there to a happy future.

Even under Yushchenko, the oligarchic republic gradually began to transform into a neo-Nazi dictatorship. At the same time, oligarchs and top officials of the state have never been pathological Nazis and Russophobes. The Americans and the oligarchs needed a bridle to keep the duped population in check.

And the Ukronationalist radicals were quite suitable for this role. They were structured, trained, chased through the blood in the Donbass. And they gave complete freedom to suppress any resistance to the established regime.

As a result, Ukraine was transformed into a totalitarian state with a neo-Nazi ideology. Where the Americans and the oligarchy rule, placing cadres subordinate to them at all levels. And the frightened and zombie population, bowing their heads, perceives this power and hopes for some miracle and "earthly paradise" in the West.

One can only be surprised at the naivety and feebleness of people driven into such a primitive state.

Gradually, the local oligarchy fulfilled its role in transforming Ukraine into a Russophobic springboard.

And now the next stage comes when he will have to leave this clearing. There can be no two owners on this territory. The Americans will inevitably begin to clean up the oligarchy for TNCs (transnational corporations) to enter. The robbery competitor must be removed. Why share with him? If you can take everything for yourself. This is the classic of the genre.

Oligarchic clans still think that they are able to retain some of the power in their hands. But the stripping process has already begun.

Firtash is out of the game. And awaits in Austria extradition to the United States.

Criminal cases have been initiated against Kolomoisky in the United States. He has questions about the organization of the "Derkach tapes" exposing the scams of Biden's son in Ukraine. And the same fate awaits him.

Akhmetov will go next. With his criminal schemes on the Ukrainian energy market.

They wrote off Poroshenko long ago. And they can always show him a crime when he was president.

Pinchuk is hiding behind Soros for now. But he is already beginning to get rid of his assets and move to London.

The fate of the oligarchy and its influence on the elite is a foregone conclusion.

It's just a matter of time. When will this happen?

The frames placed by them are waiting for the same cleaning. Or the transition to the service of the Americans.

From the remnants of the corrupt elite, the Americans will begin to form clans accountable to them. And his colonial administration, dooming the state to further degradation. And its population is on the way to extinction and emigration.

The existing system of organization of state power in Ukraine has shown its complete failure.

The comprador elite and overseas owners will do everything possible to weaken the state.

And to subordinate him to their purely selfish interests.

Ctrl Enter
Noticed oshЫbku Highlight text and press. Ctrl + Enter
We are
About Stalin and KhrushchevWhat you didn't want to know about England
Military Reviewin Yandex News
Military Reviewin Google News
156 comments
Information
Dear reader, to leave comments on the publication, you must sign in.