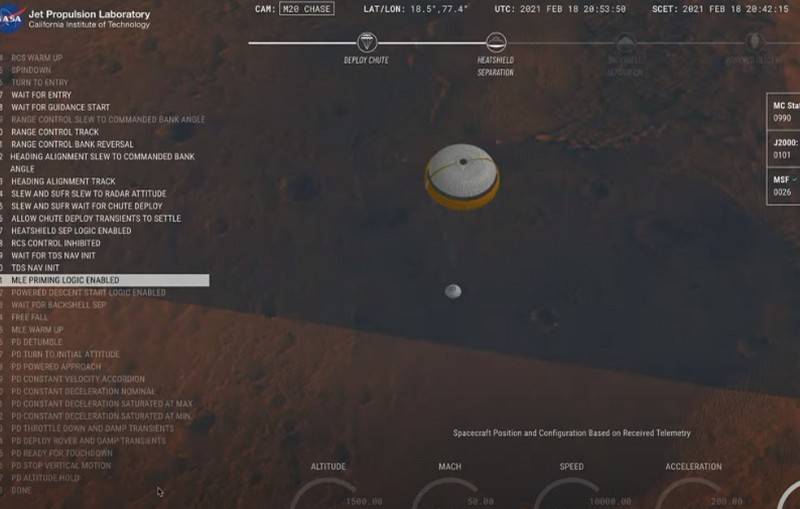 The American Mars mission, which reached the Red Planet, landed safely on the surface of Mars on Thursday. It is reported by the US National Aeronautics and Space Administration (NASA).


The unmanned station that landed includes the Perseverance rover, equipped with a special Ingenuity helicopter. The landing was carried out at 23:55 Moscow time. time. in the vicinity of the Yesero crater on the equator of Mars, about three minutes later the device transmitted the first two black-and-white images of the planet's surface to Earth.

We've just received information that Perseverance is active on the surface of Mars.
- stated in NASA.

The United States sent the rover to the Red Planet on July 30, 2020, with the Atlas V launch vehicle launched from the Cape Canaveral launch site.

The rover itself is a six-wheeled science laboratory the size of a small car, which cost about $ 2,5 billion to create. Dimensions: length - about 3 m excluding the mechanical manipulator arm, width - 2,7 m, height - 2,2 m. The rover's weight is 1 kg.

The device is equipped with seven scientific instruments and an Ingenuity helicopter capable of making five short-term flights at an altitude of about 10 meters. The main task of this mission is to collect and study the properties of sedimentary rocks in order to search for microorganisms that prove the existence of life on the Red Planet in the past.
Ctrl Enter
Noticed oshЫbku Highlight text and press. Ctrl + Enter
We are
US Mars mission launched from Cape Canaveral cosmodromeNASA announced the readiness of the Perseverance rover to launch to Mars
Military Reviewin Yandex News
Military Reviewin Google News
363 comments
Information
Dear reader, to leave comments on the publication, you must sign in.