Yavlinsky and his sworn friends 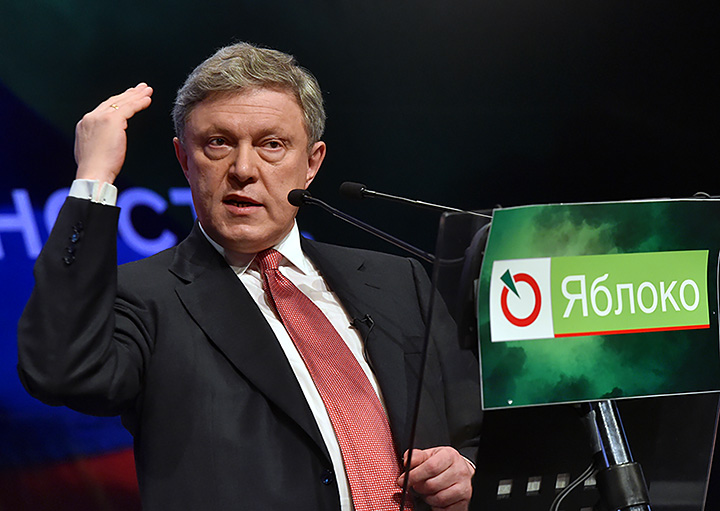 The founder and ideological leader of the oldest liberal opposition party with a peculiar name for a political organization, Yabloko, unexpectedly burst into a programmatic article under a very bold and meaningful title "Against Putinism and Populism."


This article, which contained a standard set of political assessments and ideological postulates of the Yabloko party, nevertheless caused a wide response. And extremely harsh criticism, primarily from the "progressive" liberal community in the opposition media and social networks, including those who, as a rule, sympathized with Yavlinsky.

It even caused a split in the Yabloko party itself. Which, until very recently, was the classic personal clientele of Grigory Yavlinsky. Almost in the same way as the LDPR is a long-term clientele of Vladimir Zhirinovsky, and not a full-fledged political party of the European type.

A host of opposition liberal publicists, journalists and bloggers branded Yavlinsky as a political renegade and simply a traitor to the democratic movement.

Thus, MK journalist Alexander Minkin, in an article under the unmatched title "Serial Suicide", wrote about the Yabloko leader that this "suicide" was committed by a political corpse.

And all because in his article G. Yavlinsky explained in detail why he does not share the line of Alexei Navalny and his supporters from the camp of the liberal opposition.

Yavlinsky thoroughly criticized Navalny's chaotic political views, accusing him of nationalism, authoritarian manners and leaderism at the same time. And also in cheap populism, manifested in the incitement of "Bolshevik" social enmity towards wealthy people.

Yavlinsky also condemned the methods of Navalny's team - the organization of unauthorized actions and processions, as well as the involvement of minors in them.

Yavlinsky shows quite convincingly how Navalny and his team manipulate their supporters, citing a fake film about "Putin's palace" as an example.

"This is all selling emotions in line with consumer advertising technology."
According to the author, Navalny and Russia's democratic development are completely incompatible.

“Democratic Russia, respect for man, freedom, life without fear and repression are incompatible with Navalny's policy.

These are fundamentally different directions. "
- sums up his reflections Grigory Yavlinsky.

Since at the dawn of his political activity Navalny was an activist of the Yabloko party and was expelled from it for “nationalism”, it is obvious that between these two opposition politicians

"The black cat ran for a long time."

Moreover, in the next article "Keep quiet - you will fall into the executioners", where Yavlinsky, responding to numerous accusations of political apostasy, argues that

"The philosophy of these social protests is Nietzscheanism and National Socialism."
A particular piquancy of the situation consisted in the fact that at the time of the publication of these articles, there are trials over Alexei Navalny. And he was already sentenced to a real prison term.

In this demarche of Yavlinsky, his former friends from the liberal camp saw not only a morally questionable act (it is ugly to blame a political opponent under arrest for all mortal sins), but also a clear message towards the Kremlin.

Grigory Alekseevich sold himself to Putin with "guts"
- such is the conclusion of his numerous chorus of critics and accusers.

I sold for "three percent"

- according to the liberal publicist Sergei Parkhomenko.

As you know, for a political party to receive state funding from the budget, it must gain at least three percent in the parliamentary elections. And to get into parliament and create a faction there - five.

At the same time, the authors of this criticism seem to completely ignore not only the harsh criticism of the policy of Vladimir Putin contained in this article, but also the completely unambiguous assessments of his political regime as anti-democratic, dictatorial and repressive. Which can hardly prompt the authorities to admit Yabloko (which includes such radical opponents of the regime as Lev Schlosberg from Pskov) into the State Duma.

The same Schlosberg, who actively participated in rallies in support of Navalny and called for the removal of the president from power, completely dissociated himself from Yavlinsky's position, stating that this was just his private opinion, and not the position of the entire party.

The formal chairman of the party, Rybakov, spoke in defense of the leader.

But this is unlikely to save the party, if not from a split (its opponents have nowhere to go), then from a serious political crisis, fraught with its collapse.

Since, not being formally the head of the party, its founder provides support under his own name from a number of influential businessmen. The fall of Yavlinsky's authority may put an end to the existence of the oldest liberal party in modern Russia, as such.


However, the embittered critics did not seem to understand the main point of Yavlinsky's plan.

His article is, of course, a message.

But not the Kremlin, but rather the White House. And not to Moscow, but to Washington.

Obviously, this article was prepared by the author in connection with Biden's victory in the US presidential election. And it was addressed to the American Democrats. In order to show that in Russia there is their real ally and like-minded person who must be supported.

The fact is that earlier Grigory Yavlinsky published a whole series of articles, where he criticized the policies of Donald Trump, Vladimir Putin, Recep Erdogan as dangerous authoritarian populists. And he declared his full sympathy for the US Democratic Party.

Since the fight against white racism in the United States was one of the "skates" of the Democrats' election strategy, Navalny's assessments as a nationalist and xenophobe should serve as a lethal argument for Biden's team.

In order to show the collective West that it is Yabloko that is defending “European values” in Russia, Yavlinsky in his article strongly condemns the “annexation of Crimea” and the outbreak of war in Donbas.

Unlike Navalny, whose statements on the Crimea issue were clearly ambiguous.

It is known that when asked whether Crimea should be given back to Ukraine, he replied that this is not a sandwich that can be given to someone.

On the other hand, the same Navalny talked about the possibility of holding a second referendum in Crimea.

Yavlinsky's position on this issue (in contrast to Navalny's) is completely unambiguous:

"Russia is to blame for everything."

And this also confirms the version that this article is a clear message to Biden and not to the Kremlin, since for Vladimir Putin the issue of the Russian jurisdiction of Crimea is absolutely fundamental.

And the assumption that Yavlinsky deliberately wanted to "drown" Navalny does not hold water. Because he is not being tried for political extremism.

Yavlinsky's calculation seems to be perfectly correct in theory. Navalny (with his anti-emigrant rhetoric) clearly does not fit into the ideological trends of the victorious American Democrats.

At the same time, Grigory Alekseevich, it seems to us, made one significant mistake.

The stake on the support of Alexei Navalny (as the main fighter against the Putin regime) has been made in the West (both in the United States and the EU, and in its political center - Germany) for a long time.

It is hard to believe that they didn’t know who they were dealing with when they made this choice.

Yavlinsky's calculation that America will no longer support right-wing populists with Trump's departure may be true for the situation in Poland, where the Kaczynski brothers' right-wing and nationalist Law and Justice Party enjoyed particular support from the Republican administration.

In Russia, where Navalny (and his FBK) acts as a non-partisan exposer of corruption in the highest echelons of power, this is the most profitable strategy to discredit the Kremlin. And his political past (participation in nationalist marches) can hardly serve as some kind of serious accusation.

On the contrary, it allows attracting additional supporters. In addition, the use of the standard accusation of corruption was frequently used in a number of orange revolutions. As, for example, in Egypt against President Hosni Mubarak.

However, later it turned out that most of the charges were simply fabricated for political purposes by his opponents.

And here I cannot but share my personal memories.

Nemtsov's order - write on the fences

Sometime during the premiership of Yevgeny Primakov, I happened to be present at the president-hotel in Moscow at an event of the Belarusian opposition and Russian right-wing liberals, who were unexpectedly removed from power at that time.

They discussed methods of fighting the "dad".

And over a glass of wine, Boris Nemtsov began to explain to his Belarusian friends that they were acting completely wrong, accusing Lukashenka of clamping down on democracy.

"So you will never overthrow him."

“The people don't care about your democracy.

We must act differently.

Accuse him of corruption, that he stole millions!

The Belarusian oppositionist was very puzzled.

"So you need proof, right?"

"Write on the fences - Luke is a thief!"

Therefore, most likely, the hopes of the founder of Yabloko that in connection with Navalny's landing in the White House they will stake on his party are hardly justified.

There, apparently, he will not be forgiven for the destruction of the emerging broad liberal coalition in support of Navalny.

After all, during the Ukrainian Maidan, the active participation of ultranationalists and neo-fascists from the Svoboda party did not in any way alienate Western leaders from supporting the coup and overthrowing the moderate centrist Yanukovych?

But the Yabloko party did not condemn Ukrainian nationalists either?

At the same time, there is only one plus for Yavlinsky in this difficult situation for him (as a politician).

He showed to his few, but ideologically verified supporters that for him liberal values ​​are more important than momentary political tactics.

In general, as the Stalinist Nina Andreeva wrote in her time in the newspaper "Soviet Russia":

"I cannot compromise my principles."

It seems that Grigory Yavlinsky sincerely thinks so.

Ctrl Enter
Noticed oshЫbku Highlight text and press. Ctrl + Enter
We are
About Stalin and KhrushchevOn the other side of the “red” and “white”. Izborsk Club Report
Military Reviewin Yandex News
Military Reviewin Google News
56 comments
Information
Dear reader, to leave comments on the publication, you must sign in.