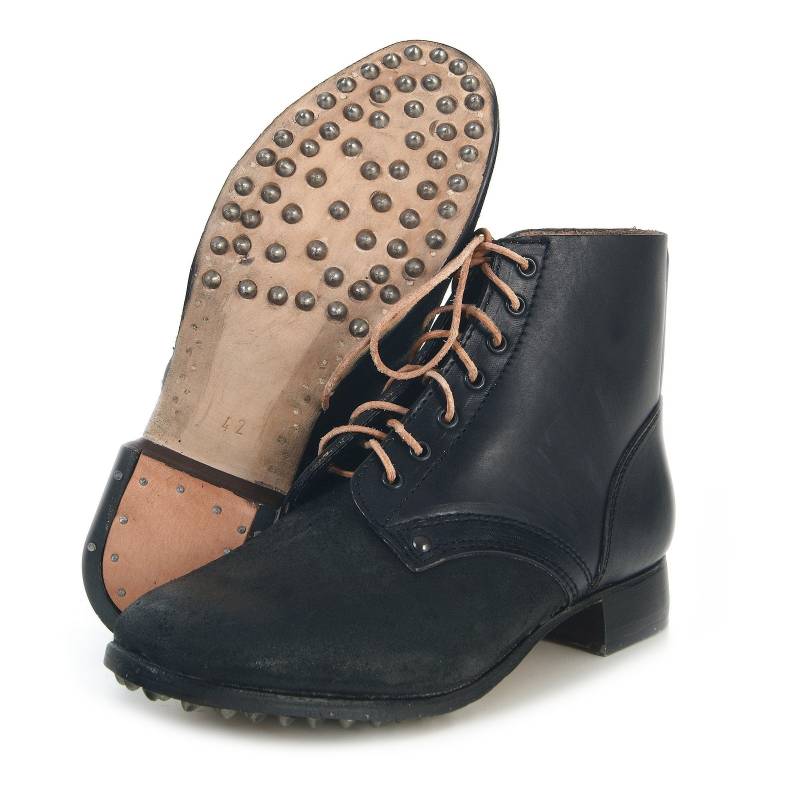 How to describe in one word this Polish army footwear?

The fact is that after the First World War, Poland, which became free, began to create its own army, focusing both on its own traditions and on the experience of neighboring countries.

The desire to shoe every infantryman in good-quality leather boots quickly ran into harsh realities - expensive.

So, as in the armies of Germany and the USSR, it did not work out.

High leather boots were given only to officers and cavalrymen.

For sappers introduced low. And the quality is worse. With soles from soldiers' boots.

But "Private Infantry Janek" got the 1931 model boots. When creating them, the influence of French "fashion" was clearly felt.

Take a look at the photo of the soles. Doesn't it look like anything?

True, they looked rather like the Parisian boots of the late period - the 1919 model.

They were "infantry chereviks" made of high-quality leather of cattle. Moreover, the sock differed from the top in the quality of processing.

Average height. There were seven round eyelets for open lacing. And, of course, rivets that reinforce the top and bottom.

The sole is leather. It was reinforced with nails - spherical-headed spikes. The number of spines varied. But no more than 50 pieces per shoe.

The heel is also leather. I nailed it with carnations and had a horseshoe.

Color. This is where the fun begins.

In black and white photos, you can see that the color of the shoes is different in shades. With black everything is clear. And how to understand "gray" and "whitish" colors?

It turned out that both boots and boots for sappers were supplied in a light red, unpainted state! And there already - who in what way. Of course, with the blessing of the authorities. Shoemakers and soldiers, when the look of light-colored boots ceased to be dandy, repainted them both black and brown. There is information that sometimes they were also varnished. So initially the “chereviks” looked like this. 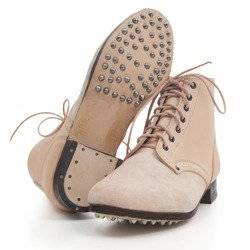 Shoes with cloth gaiters were worn. Although sometimes you come across images with typical windings. True, not high. These are most likely exceptions. As well as the low skewers from 1925.

It is impossible not to mention one more boots. I cannot say for sure what they used in the Polish General Staff - the idea of ​​restoring Poland "from sea to sea" or the presentiment of a new war.

But in the mid-thirties, it was decided to develop a new boot model. So to speak, "mobilization" or "reserve".

They were supposed to be kept in warehouses. And in case of general mobilization - to be issued to conscripts.

The cut of the top has changed. There are nine pairs of eyelets. And the place under their location was reinforced with leather overlays. The color mentioned is brown. The outsole remains identical to its predecessor.

But somehow, everything went wrong with this sample.

Summed up the calculations of shoe lasts. After the first shipments began to arrive at the warehouses, they were selectively sent to the troops for inspection. And from there complaints came.

If there were no complaints about the quality and strength, then the convenience left much to be desired.

The soldiers complained of an uncomfortable rise and a narrow toe.

The boots rubbed their feet and wore out for a very long time, as they were sewn from thick leather.

In the letter, he described everything in detail and accurately enough. He also indicated the necessary ways to eliminate the size discrepancy.

Changes were made promptly. And new shoes began to arrive in warehouses.

Some of them were shod by mobilized Poles when, on September 1939, XNUMX, the first salvoes of the most terrible war in stories humanity.

Ctrl Enter
Noticed oshЫbku Highlight text and press. Ctrl + Enter
We are
About Stalin and KhrushchevWhat you didn't want to know about England
Military Reviewin Yandex News
Military Reviewin Google News
95 comments
Information
Dear reader, to leave comments on the publication, you must sign in.