The fiasco of the palace coup. How the "Berlin patient" tried to overthrow the Russian government 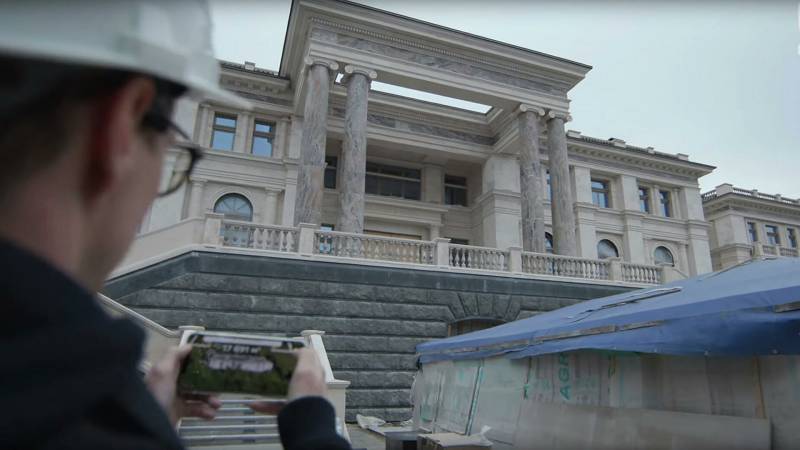 The same "Putin's Palace". It is still under construction. Photo: mash / Youtube

I would not like to repeat the words of the famous Russian propagandist Dmitry Kiselev, but the German film about "Putin's palace" is a real foreign sabotage. 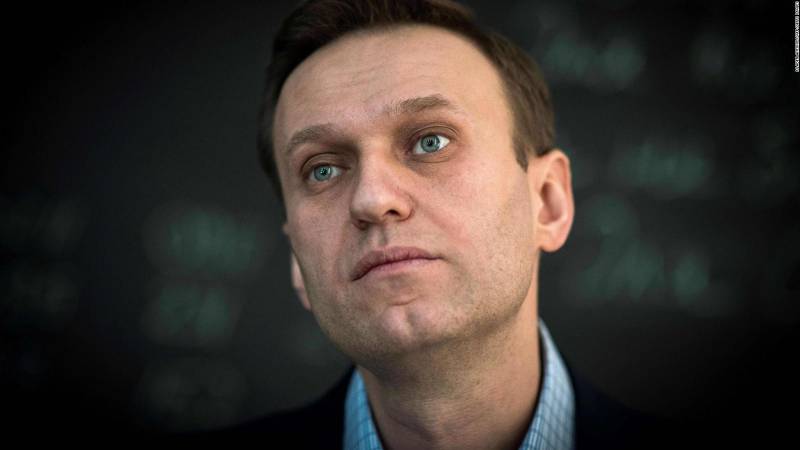 Source: cryptofeed.ru
The purpose of the film is very simple - as radically as possible to tarnish the image of Vladimir Putin and his entourage in the eyes of, first of all, young people. Why did foreign authors choose children and adolescents as their target audience?

First, adults, as expected, perceive the world around them more critically and are less radical in their judgments.

Secondly, young people have a heightened sense of justice, even if it fails in the perception of reality.

Thirdly, the young have nothing to lose. Most of them are not burdened with family, work, and sometimes even study.

And finally, fourthly, teenagers are a great tool for inciting hatred.

Several outright provocations, followed by the violent dispersal of the protesters, can become excellent trimmers for new, larger-scale demonstrations. Outraged parents, and just sympathizers, stand up for the children beaten by the security forces - an excellent scenario for the Russian Maidan-2021.

Only the strategists who feed Navalny's office did not take into account that young people who do not need their parents would take to the streets. More precisely, of course, is needed. But only in the format of an offspring buried in a smartphone, who does not ask anyone questions and does not attract unnecessary attention.

Also a very vicious offspring, whose hatred sometimes goes beyond all boundaries.

The post by Semyon Slepakov in his Instagram account, filled with disgusting curses from Navalny's fans for the author's completely harmless and witty rhyme, is very indicative. The true face of democratic protest in all its glory. Read it, you will not regret it - you will learn a lot about the morality of those who are ready to go to rallies under the impression of the German film and the arrest of Navalny.

The logic of the film "Putin's Palace" was built in full accordance with the outlook of the target audience. A lot of facts and visual balancing act, not particularly supported by evidence base.

For example, a conversation with an FSB officer on the phone explaining that Cape Idokopas must be bypassed by boat for two miles. The filmmakers did not bother to provide any, even the most primitive proof of the reality of the conversation with the secret service employee. At least they inserted a close-up of the moment of dialing the real number of the officer on duty of the FSB of Russia in the Krasnodar Territory. It's not difficult - the phone is publicly available. So at least they added a natural flair to the plot.

An important part of German cinema with Navalny is occupied by computer graphics of the interior decoration of the palace. She's really impressive. The thoughts immediately come to mind that this could only be done in the West. Unfortunately, even in the box office Russian cinema, special effects can be found much cheaper.

And again about Navalny's teenagers. Accustomed to consuming information mainly through ready-made images of YouTube, TikTok and Instagram (and not through reading complex texts), young people willingly turn off critical thinking and are thoroughly saturated with Western propaganda.

But all the same, the scriptwriters of "Putin's Palace" had some punctures.

And they deserve close scrutiny.

With the implementation of this thesis at the German film studio Black Forest, which filmed the film for Navalny throughout December last year, everything turned out to be in order. They did not follow the Montenegrin eagle, which crouched at the entrance gate of the palace, although the original legend was about the two-headed eagle of the Russian Empire. They are really very similar, but on the chest of an eagle from Montenegro there is a leopard lion, and in the Russian original there is an image of George the Victorious.

This is not even outrageous. And the carelessness of Navalny's team.

How did it happen that the people who scraped out all the ins and outs of the corruption scheme of the higher echelons of the Russian government could not identify such an epic fake?

Or FBK activists have nothing to do with the script of the film? And did the Western special services do all the work for them? 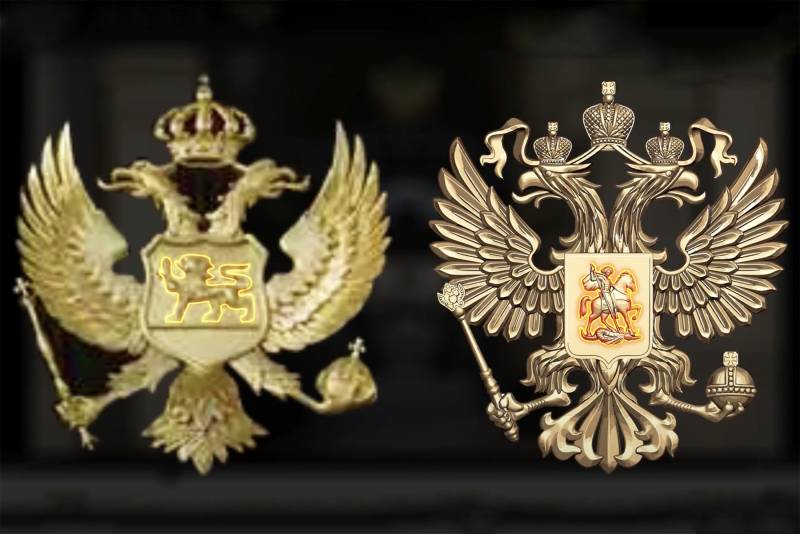 On the left is the Russian coat of arms according to Navalny, on the right is the real one. Photo: vesti.ru screenshot
Navalny could not recognize in the script of his revealing film another Easter egg, kindly prepared by Western directors.

It's about a room or a storehouse of dirt, the presence of which in the "Putin's Palace" was so indignant at the main character of the story. It is not entirely clear why she is in such a fashionable building at all?

But it is very likely that this is a clumsy translation of the word mudroom - hallway. That is, the originally English-language text for the film was simply very unprofessionally translated into Russian. And they passed it off for the president's lordly manners. 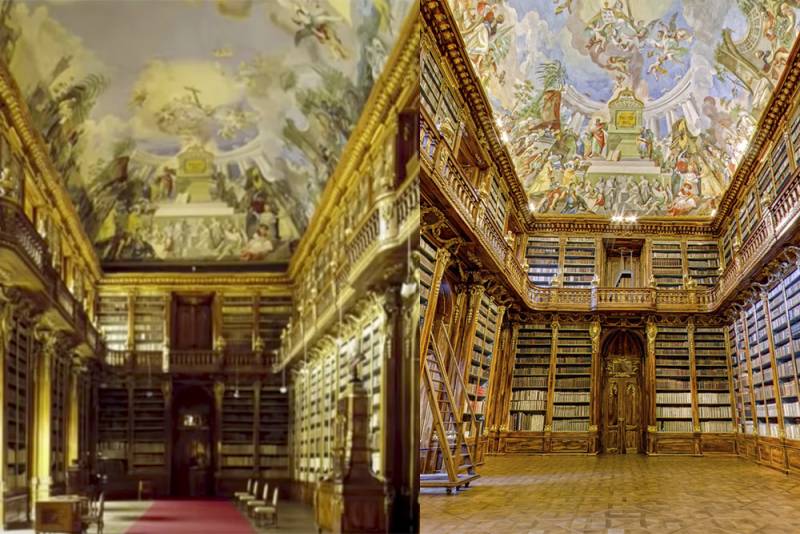 There is also a library in the "Putin's Palace". Completely transported from the Strahov Monastery in Prague?
Photo: YouTube.com / strahovskyklaster.pano3d.cz
But all of the above is noticeable only to a trained eye, initially set to search for script failures.

But the episode at 58 minutes and 36 seconds of the film, even from the first viewing, is out of the general tone of the narrative.

Navalny shows a photo of the Philosophical Hall of the Strahov Library in Prague, passing it off as one of the many rooms in Putin's Palace. The building supposedly contains a multi-storey library hall with tens of thousands of books. Again, this is not a matter of rigging photographic evidence. And in the destroyed logic of German cinema.

Up to this point, according to the script, Navalny methodically and very cheaply dehumanized the image of Vladimir Putin, turning him into anyone, but not into a lover of intellectual leisure. For this, the legend was served by the notorious aquadiskotheque, a game room with machines, vineyards with a winery and a hookah bar.

And then suddenly a whole library filled to the brim with folios that one person cannot read in ten lives.

I just want to answer this already famous: 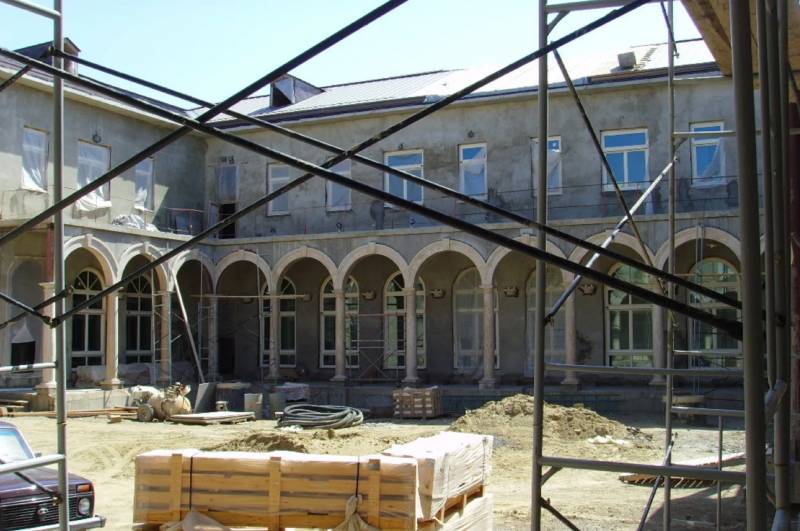 The inner courtyard of the palace, built by the "stolen". Source: «Medusa»
The plots of the Mash channel and Russia-1 channel, in which correspondents with television cameras were allowed inside the notorious “Putin's Palace”, became the nail in the coffin of the propaganda in bulk.

The building is, of course, completed. But the interior decoration is still at the zero level. More precisely, there is nothing there at all. Except for concrete ceilings, walls and floors. The cognitive dissonance that occurs thereafter is difficult to describe.

What then was Navalny filming if the palace was still at this stage of unfinished construction?

Where are the insanely expensive interiors with Italian furniture, which supposedly went to the welfare of the Russian people?

Even the satellite Google maps of Cape Idokopas confirm that the residence, even when viewed from above, is far from completion.

All this would be very funny if it were not very sad.

Sabotage was, is and will be

Fake история with Putin's "palace", which has gained more than 110 million views on YouTube, this, unfortunately, is not the only episode of purposeful sabotage.

With a certain degree of certainty, we can call last year's poisoning of Navalny itself a part of this large-scale plan to swing the situation in Russia. Almost to death a well-known oppositionist, in order to provoke a protest both inside the country and outside.

An excellent plan - one can only guess whether Navalny himself was initiated into it or not knowing whether he played the role of a sacred victim?

All possible media resources were connected to the operation to overthrow the state system in Russia by the hands of minors.

On TikTok, by January 23, thousands of unknown bloggers are entering the battle, urging users to “walk”. In just a few days, views of hashtags # bulk, # rallies, # palace Putin reach more than one billion.

YouTube, in general, intersperses views of harmless videos with very ambiguous content about the power dictatorship and rampant corruption in Russia. With video hosting, I must say, an interesting story happened. According to Igor Ashmanov, president of Kribrum, a company that monitors and analyzes social networks, YouTube boosted Putin's Palace additional millions of views.

And the Anti-Corruption Foundation itself has gone wild.

Navalny's press secretary, Kira Yarmysh, has published internal account statistics regarding "Putin's Palace." It turned out that even with 50 million, the total viewing time did not exceed 17,5 million hours. Not all users were able to master the entire film. On average, viewers spent only half an hour on a two-hour video.

Nevertheless, social networks have fulfilled their role. And they took to the streets of Russian cities ... 0,05% of the country's population!

And this is in the best variant of counting for the protesters. The efficiency is, frankly, not the most impressive.

But further sabotage and provocations will follow. Visualization technologies are actively developing, which, as we see from the German film, are used very well in the West.

In particular, the Deepfake technology, which allows you to create a digital copy of any person, make him speak from the screen and do whatever he wants, can be especially dangerous. What will the exalted teenagers say when they see Vladimir Putin on their smartphone screen, leaving the residence on Cape Idokopas? Is this the long-awaited proof?

The fiasco of Navalny's palace coup was partly a consequence of the technological imperfection of Western technology.

But time does not stand still.

And it is far from on our side.

Ctrl Enter
Noticed oshЫbku Highlight text and press. Ctrl + Enter
We are
About Stalin and KhrushchevWhat you didn't want to know about England
Military Reviewin Yandex News
Military Reviewin Google News
707 comments
Information
Dear reader, to leave comments on the publication, you must sign in.