NASA Moon. The Pentagon has declared the Earth satellite its area of ​​responsibility 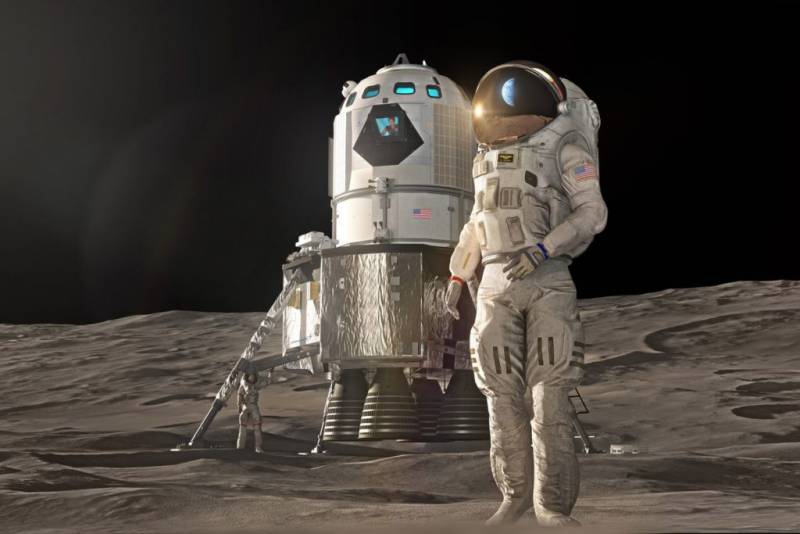 Our society is almost exclusively driven by consumption. The problem smoothly flows from the economic plane to the military - wars will eventually start over depleted resources. You don't have to go far for examples, you just have to look at the situation with the Arctic Ocean. In addition to the gradual release of ice from the Northern Sea Route, the development of minerals on the continental shelf is greatly simplified. It is even difficult to count the number of countries ready to wage war with Russia for the unhindered use of the resources of the northern region.

If we take into account exhaustible resources, then one of the most critical for the world economy are rare earth elements (17 elements in total), the consumption of which has grown from 50 to 5 thousand tons over the past 125 years. Nowadays, rare earth elements can rightfully be classified as strategic raw materials - in many respects, the success of the development of the military-industrial and aerospace industries depends on them. In most cases, mankind has already faced the depletion of stocks of such elements. And this is not always associated with a decrease in production volumes from deposits - often mines are located in the territory of permanent hostilities.

There are also difficulties with the extraction of non-ferrous and precious metals, which play a key role in the industry of any state. There are a lot of forecasts regarding the dynamics of field depletion, but, as usual, everyone looks at the worst scenarios. The anticipation of the apocalypse, even among scientists, always sells much better than a cloudless future. In the most pessimistic future, mankind will face a serious shortage of gold - in 2032, it simply will not remain in the bowels of the Earth to be mined in the traditional way. We will have to develop new methods of extraction (for example, from sea water), and this will multiply the cost of the precious metal. Pessimistic scientists predict chronic shortages of cobalt by 2048, tungsten by 2054, aluminum by 2064 and, most surprisingly, the disappearance of iron ore deposits by 2049. Such crisis assumptions make scientists and politicians look for ways to extract minerals in near and deep space.

In this regard, the moon can become a real pantry, simply stuffed with useful elements and compounds, which can be used in different ways. Scientists are considering the possibility of building lunar station housing modules from local material. As noted in the publication "Space Engineering and Technology", a lunar quarry with a size of 100 × 100 m and a depth of 10 m (the volume of loose matter in natural bedding) contains a significant amount of useful materials. The development of only one such quarry will provide about 40 thousand tons of silicon, suitable, for example, for the manufacture of solar cells, and 9 thousand tons of titanium for the manufacture of load-bearing structures of high strength and durability. There is a lot of titanium in lunar rocks - on average, 10 times more than on Earth. "Winged metal", suitable, among other things, for the construction of electrical infrastructure, from the lunar quarry can be mined in an amount of up to 30 thousand tons. Along the way, 25 thousand tons of iron will be used with small bonuses in the form of magnesium, calcium and chromium. Finally, up to 90 thousand tons of oxygen can be extracted from the same volume of lunar regolith (a global layer of fragmented rocks). In general, for the construction business on the moon, almost everything you need is presented, and even more. The only thing left is to create a technology for the production of building materials and structures from all this good and adapt it to lunar conditions. 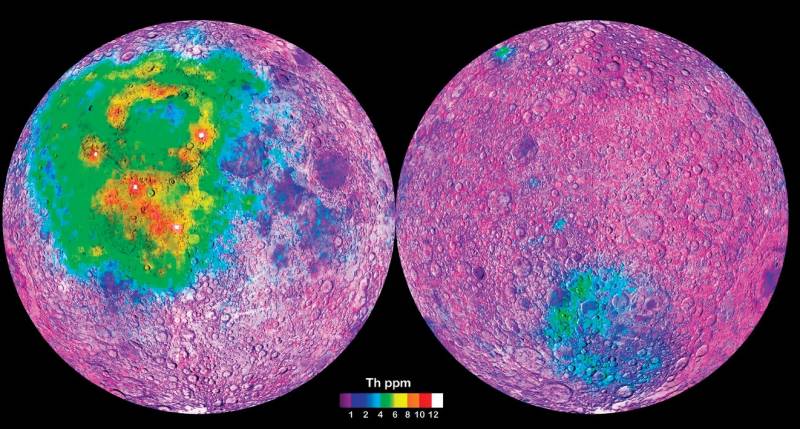 Distribution of rare earth metals in the hemispheres of the Moon. Source: "Space Engineering and Technology"
At the beginning of the XXI century, large accumulations of water ice were discovered in the polar regions of the Moon - this inspired even more optimism in futurologists regarding the construction of habitable stations. Water is not only life support for humans, but also a source of rocket fuel (oxygen and hydrogen). In the very near future, lunar robots will be sent to these satellite territories.

The prospects for the extraction of valuable resources, which, in other words, do not take up much space, but are expensive, look more realistic. This can be the platinum group of metals: iridium, osmium, palladium, rhodium, ruthenium and platinum. And, of course, the main fantasies revolve around the notorious helium-3. This substance, abundantly flavoring the lunar soils, is destined for the honorable mission of saving mankind from energy and ecological collapse. One ton of this helium isotope, if used correctly, can replace up to 20 million tons of oil! According to the most conservative estimates, helium-3 on the Moon is of the order of a million tons, which promises a bright future for humanity for several centuries to come. The only thing left is to learn how to deliver the isotope to Earth relatively inexpensively and create an operating thermonuclear reactor for it.

Fantastic history let's continue with incriminations. In 1967, the United States signed the "Treaty on the Principles Governing the Activities of States in the Exploration and Use of Outer Space, Including the Moon and Other Celestial Bodies." In addition to the United States, 104 more states have signed this legal act. It has a lot of vague formulations and definitions, for example, Article II:

Outer space, including the Moon and other celestial bodies, is not subject to national appropriation either through the proclamation of sovereignty over them, or through use or occupation, or by any other means.

It is clear from the text that states are prohibited from expanding their territory at the expense of possessions in outer space. Accordingly, it is also impossible to dispose of space objects as property. Nevertheless, in 2015, the United States passed the Law on the Exploration and Use of Space Resources, which allows private companies to extract minerals from celestial bodies, including asteroids. You can only allow mining in the controlled territory, isn't it? The further development of the situation is even more reminiscent of the raider capture of the Moon. In late January, The Wall Street Journal notified the world that future American bases on the moon would be guarded by the Pentagon. Here the United States is already quite unambiguously marking the boundaries of its possessions, pointing even to potential space enemies - Russia and China. 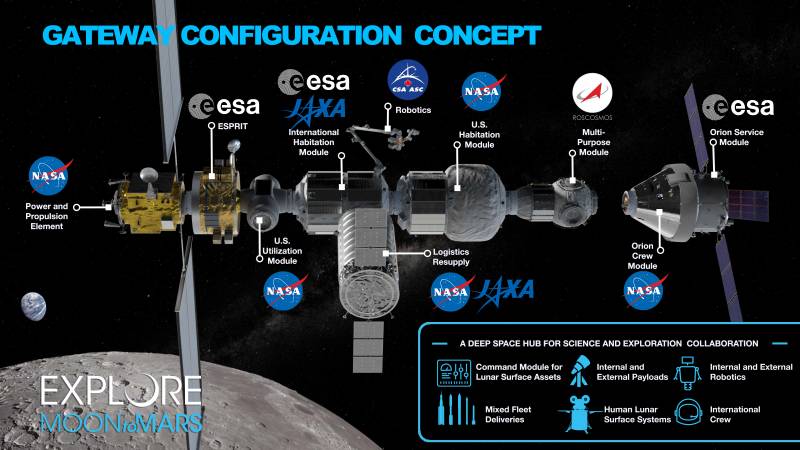 In the coming decades, something like this should circle in the orbit of the moon. Source: ru.wikipedia.org
Such statements are related to plans for the development of lunar space in conjunction with European countries and the United States. Washington acts as the main payer in this story, and the rest, as Dmitry Rogozin aptly put it, as “apprentices”. Among them are Australia, Canada, Luxembourg, Italy and, of course, Japan, which is constantly suffering without sovereign natural resources. The project was named Artemis, and, according to plans, the first made in USA modules on the Moon should appear in 7-8 years. And the first astronauts will land around 2024. NASA has outlined very ambitious prospects for itself, given that the program itself started in 2019.

The space race with unclear prospects seems to be gaining momentum. Many countries join it not because they are really interested in space exploration, but because the colonization of the Moon is a global hype. So, since 2019, the United Arab Emirates has become an "offshore" place for companies willing to invest in the exploration of the Moon and near space. Welcome to Dubai spaceport! These are the slogans we will hear in five or six years in case of a successful development of events. Little Luxembourg in general in 2016 discovered the concept of "space offshore", declaring itself a European integrator of mining in space. A year later, the duchy passed a law recognizing the private right to extract and sell space resources. It should be noted that Donald Trump signed a decree securing the rights of Americans to do this only in 2020. The Japanese are ready to give the green light to a similar law in the coming months.

The lunar race is indicative of the actual absence of Russian interests in it. The country, which several decades ago set the pace in the exploration of the moon, was on the sidelines. At present, all the ambitious plans of Roscosmos regarding the Moon go several decades in advance. Critics will note that the Europeans and the Americans are not doing much better - foreign lunar missions are at the design stage. This is partly true: it is not fully known whether the lunar race will be crowned with the success of one or several players at once - too little time has passed. But since the beginning of the XXI century, the United States, Japan, China, India and the European Union have sent more than 20 research vehicles to a natural satellite of the Earth, and Russia has not one.

Ctrl Enter
Noticed oshЫbku Highlight text and press. Ctrl + Enter
We are
Our shelfRussia is predicting a military, economic and political battle for Cyprus
Military Reviewin Yandex News
Military Reviewin Google News
185 comments
Information
Dear reader, to leave comments on the publication, you must sign in.