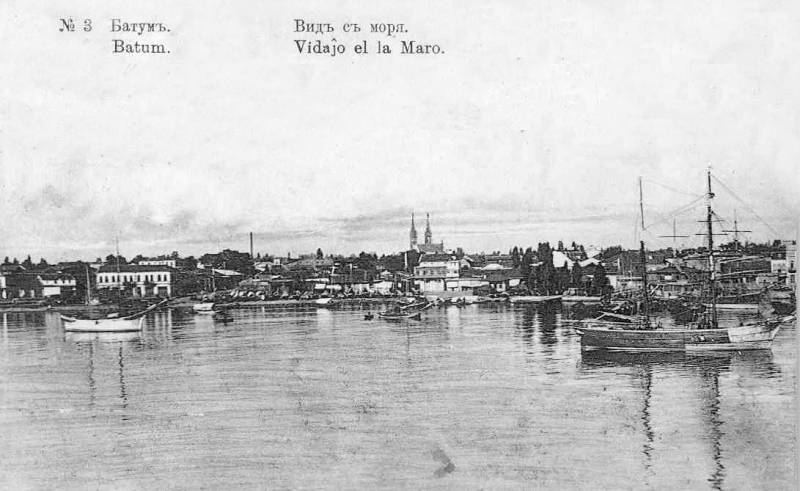 “The eternal dreams of the Turks:

destroy half of the Russian human potential,
capture territories, including the Caucasus. "
From the statement of the USSR Permanent Representative to the UN Andrei Vyshinsky
Izvestia, October 28, 1947

The art of the possible

The pro-Russian Transcaucasia has always attracted not only Turks, but also their patrons. The difficult internal political situation in the USSR in the last years of Stalin's rule pushed Ankara to develop a number of invasion plans.

The most real among them was the seizure of Adjarian Batumi, and then the Georgian Poti - the most important Soviet ports in the southeast of the Black Sea region. A special time was chosen for the invasion - when the Mingrelian case was launched in 1951-1953. (for more details see What is the connection between the murder of Stalin and the Mingrelian case), which caused serious fermentation, and not only in Georgia.

The old idea of ​​settling in the far corner of the Black Sea was made even more tempting by the real prospect of cutting the strategic transcaucasian oil pipeline Baku-Agstafa-Tbilisi-Khashuri-Batumi. And to do this together with the USA and NATO.

Even on the eve of the Great Patriotic War, together with the British and French troops, and then already during the war years, Turkish plans against the USSR of 1940-1943 directly provided for the occupation of Batumi and the whole of Adjara. Ankara took into account the fact that Batumi is located only 25 km from the Turkish-Soviet border, and the fact that the Black Sea Muslims - Ajarians will support the return of the region to Turkey.

At the same time, the Soviet troops, as Turkish strategists hoped in 1942, would not be able to defend the region due to the powerful onslaught of the Wehrmacht on the Volga and the North Caucasus. Such plans were also discussed during the visits of the leadership of the Turkish General Staff in 1941-1943. in the location of the German troops on the Eastern Front.

The Turkish guests with ostentatious generosity presented food and medical gift sets for the German military (Fuhrer's Caucasian Gambit). But then it didn't happen ...

The art of the impossible

At the turn of the 40s - 50s, Turkish plans were revived within the framework of Turkey's military-political alliance with the United States and NATO. Turkey has become a member of the North Atlantic bloc since February 1952. According to the Soviet counterintelligence and the Ministry of State Security, the then planned "Mingrelian coup" in Georgia was directly related to the same plans. 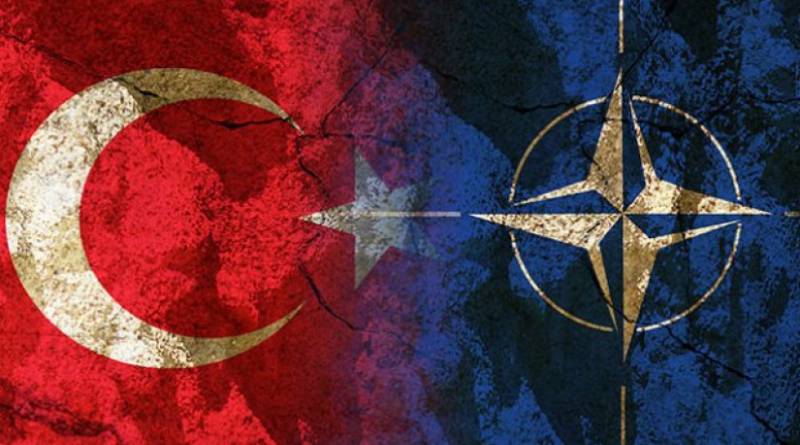 So, according to the decree of the Central Committee of the CPSU (b) of November 9, 1951 "On bribery in Georgia and on the anti-party group of comrade Baramia" - Mingrel, then second secretary of the Georgian party Central Committee:

"The Mingrelian nationalist group of comrade Baramia is pursuing the goal of seizing the most important posts in the party and state apparatus of Georgia and nominating the Mingrelians for them."
There, further, the identified connection between the Baramia group and the pro-American Georgian emigration is noted:

“As you know, the Georgian political emigration in Paris serves the American intelligence service with its espionage information about the situation in Georgia.

Recently, American intelligence began to give preference to espionage information from Gegechkori (Mingrel, a politician of the Russian Empire (in 1918-1921) and independent Georgia, head of its “emigrant” government in the first half of the 50s).

But the Gegechkori espionage and intelligence organization consists exclusively of Mingrelians. "

These plans are huge

Meanwhile, it was in 1949-1952. Soviet counterintelligence often found "pro-Turkish" proclamations in Adjara about the need to "reunite" Adjara with Turkey. But in the same period, the scientific and historical-literary media of Georgia began to publish materials about the ethno-linguistic conjugation of the Mingrelians and the Turks, about the need

They also remembered the oppression of the Mingrelians. And not only in tsarist Russia. But also in the first half of the 1930s. That is, at a time when the leadership of Georgia was headed

"Henchmen of the Trotskyite-Zinoviev bloc of spies and saboteurs."

Obviously, such publications were encouraged by the same Baramiya group, which the Central Committee of the All-Union Communist Party of Bolsheviks (Bolsheviks) justifiably accused on November 9, 1951 of anti-Soviet Mingrelian nationalism.

The plans to invade the USSR in the days of the "Mingrelian affair" have a lot of evidence. And not only documentaries.

Thus, the Armenian underground organizations of avengers for the genocide (1948-1952) informed the Soviet side about the preparation of military warehouses, radio intelligence points, helipads and other facilities near the Turkish border with Adjara, where military from the United States were frequent guests.

The underground Communist Party of Turkey and Kurdish guerrillas reported the same.

But in the same period, not far from Adjara, military maneuvers of Turkish troops were regularly carried out. And many Turkish media have launched a campaign that

"It's time to remember"
about the Russian rejection of Batumi and Adjara from Turkey in 1878.

In addition, since the middle of 1947, pan-Turkic and anti-Soviet proclamations have been actively penetrating Ajaria, Azerbaijan, Meskhetia (southwestern Georgia, from where the Meskhetian Turks were evicted in 1943–1944).

In connection with such a complex anti-Sovietism of Ankara, the political administration of the Soviet troops in Bulgaria sent on April 9, 1947 to the International Information Department of the Central Committee of the All-Union Communist Party (Bolsheviks) the information "On the political situation in Turkey at the beginning of 1947"

This document noted that

“The Turkish government, in addition to maintaining a large army, conducts a number of military mobilization activities, inspires and supports the evil propaganda against the USSR and Bulgaria.

The authorities are carrying out a partial evacuation of the population from Kars and Ardahan bordering the USSR, explaining this by some kind of "growing danger from the Soviet Union."
("Information summary on the political situation in Turkey at the beginning of 1947, 09.04.1947/17/128", RGASPI, f.1115, op. XNUMX, d. XNUMX). 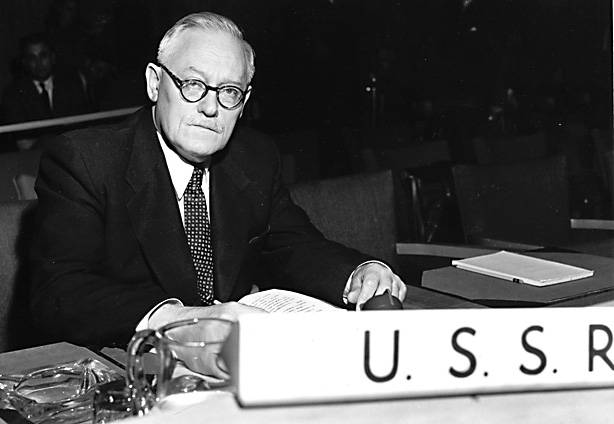 Andrey Vyshinsky - Prosecutor, Permanent Representative to the UN, Head of the USSR Foreign Ministry
Soon the Soviet side called things by their proper names, directly accusing Turkey of preparing an invasion of the USSR. Moreover, this was announced by the USSR Ambassador to the UN A.Ya. Vyshinsky at a meeting of the UN General Assembly polycommittee on October 24, 1947:

“On December 2, 1941, the Nazi Ministry of Foreign Affairs informed the Nazi generals about the Turks preaching the idea of ​​independent, or at least outwardly independent, Turkic state formations in Crimea, the North Caucasus, Azerbaijan, and in both of the latter - as parts of the“ Caucasian state ”, including Batumi and Adjara ”.
(Izvestia, 1947, October 28).

Clearly, a war was brewing in relations with Turkey. In such a situation, the leadership of the USSR ordered the final "cleanse" of the Turks from the entire Soviet Black Sea region. On April 4, 1949, the Politburo of the Central Committee of the All-Union Communist Party (Bolsheviks) adopted a resolution "On the eviction of Turkish citizens, stateless Turks, and former Turkish citizens accepted into Soviet citizenship, living on the Black Sea coast and in the Caucasus."

“In connection with their, for the most part, parasitism and participation in the dissemination of pan-Turkist and anti-Soviet propaganda.

Ankara understood that any military provocations in the Adjarian sector of the border and, moreover, the invasion of Adjara would be followed by an immediate response from the USSR. And, most likely, so large-scale that it will affect the entire vast territory of Eastern Turkey. But, feeling support behind their backs, they bluffed to the last.

Moscow in 1945-1952 regularly demanded the return to Armenia and Georgia of the territories transferred to Turkey in 1920-1921, and suspended (until February 1953 inclusive) the operation of the Soviet-Turkish treaties of 1920-1921. Variants of a military operation in eastern Turkey were already ready in the event of a maximum aggravation of relations. 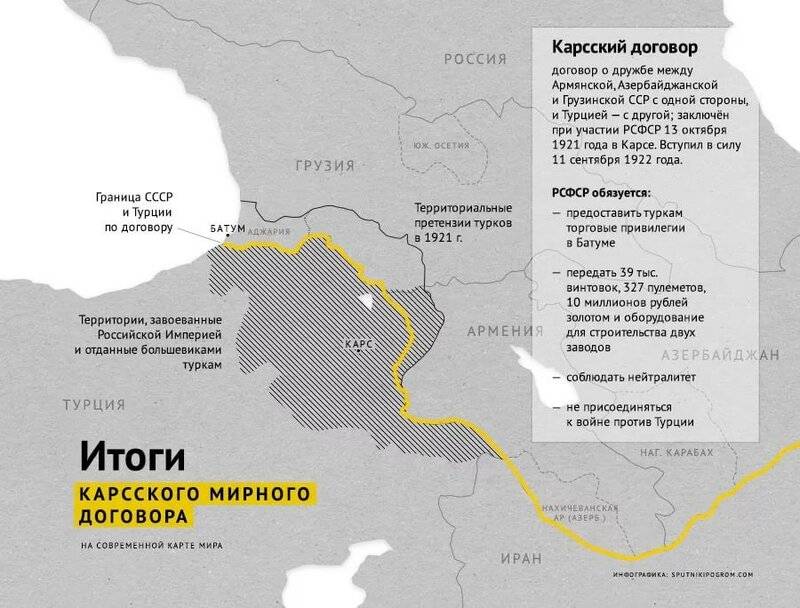 And even the leaders of the "new" party regional committees in the same region were appointed. This scenario was also facilitated by the fact that until 1952, when Turkey was admitted to NATO, the level of its military cooperation with the United States and NATO could not ensure a successful counteraction to the Soviet invasion.

But the current situation was aggravated by the fact that American radio intelligence points from the middle of 1948 were established not far from the borders of Turkey with Georgia and Armenia.

And the USSR Embassy in Turkey on December 17, 1949 reported to the Soviet Foreign Ministry about:

“More active anti-Soviet actions and events of“ public ”emigre organizations in Turkey of Adjarians, Abkhazians, Azerbaijanis, Meskhetians, Circassians, Chechens, who call for the“ restoration ”of Turkish sovereignty in Ajaria and Nakhichevan, to support some“ groups ”there, advocating withdrawal from the USSR and for alliance with Turkey.

There are suspicions and a number of indirect facts that all these groups are under instructors from the US CIA and the Turkish intelligence service MIT. "
(TsGA AR, f.28, ​​op.4).

Ankara's deliberate courage was fueled by the fact that up to 10 plans an atomic strike against the USSR with a military invasion of its borders. Moreover, both of them - from Turkish territory.

In this regard, Andrei Vyshinsky, who headed the Soviet Foreign Ministry, sent members of the Politburo over 50 messages from the USSR Embassy in Turkey about possible Turkish-NATO subversive work in the Caucasus.

In an explanatory note to these messages, Vyshinsky noted:

“The Turkish government has shown by its practical deeds that it is pursuing an openly hostile anti-Soviet policy.

With all possible support from the ruling circles of Turkey, the pan-Turkists intensified their anti-Soviet activities.

The Americans show a special interest in them, meaning their use in the implementation of their plans for subversive work in the USSR and the countries of people's democracies.

Taking into account this situation and other factors, one can expect border provocations in order to then “accuse” the USSR of some kind of aggression and “justify” a military invasion from Turkey into Transcaucasia.

In a word, the growing crisis in Soviet-Turkish relations in the late 40s and early 50s coincided in time with the identification of the plans of the Mingrelian leadership of Georgia.

Which, as the aforementioned facts and tendencies in these relations show, was an integral part of the Turkish-NATO plans to destabilize Georgia. And Transcaucasia as a whole.

Turkey's appetite for Adjara did not diminish even with the collapse of the USSR.

According to many sources, at least half of the industrial capacities in present-day Batumi and Adjara as a whole already belong to de jure or de facto Turkish business.

New economic objects, if built there, are almost exclusively by Turkish companies. Turkish language has actually become a parallel language in Adjara. And the Batumi port has long been the main "receiving" of the warships of Turkey and NATO.

“Turkey has actually already taken away Adjara from us, both religiously and economically.

Dozens of different Muslim organizations have been functioning in Adjara for a long time, they are funded by the Turkish government.

The main goal of this course is to convert more and more local people, and not only Ajarians, to Islam. "
Moreover, the

“In Adjara, locals are already afraid to speak their native language - the Turks do not like this, in whose hands the entire business of the autonomous republic is already in control”.
The expert continues:

“For example, Batumi airport is actually an airport in Turkey.

There, the Turks do not go through any customs procedures: they fly to Batumi, freely cross the border, immediately get on the bus - and that's it. Also on the return route.

Turkish trucks do not pass customs inspection in Adjara either.

In a word, we can already say that Adjara has gradually become a "Turkish region", now only formally part of Georgia. "