The myth of "enlightened" Europe 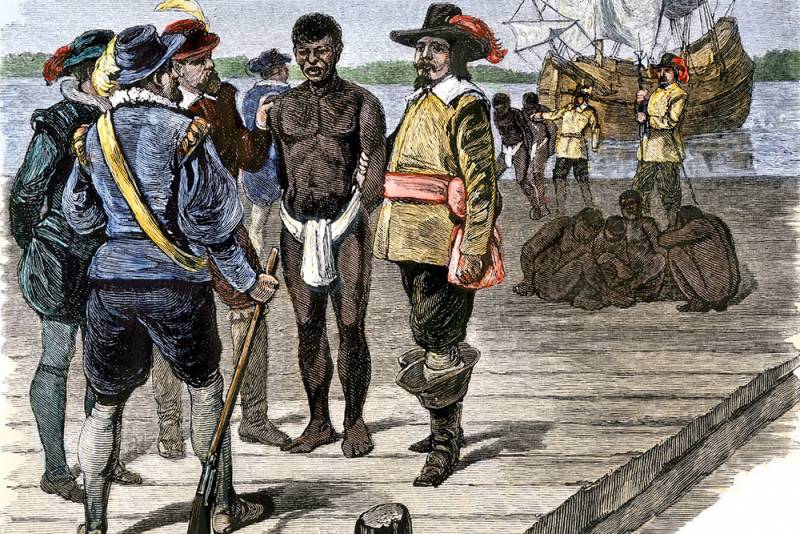 The success of Europeans on the world stage during the Great Geographical Discoveries was not determined by intellectual, cultural, technical superiority or "progressive" social order. And the weakness or mistakes of other peoples and powers. Also, European predators were distinguished by unprecedented arrogance and aggressiveness.

Nowadays the myth prevails that "developed and enlightened" Europe was able to "open" the world and bring the beginnings of civilization to the most remote corners of the planet. However, this is a delusion and deception.

For example, the Roman throne was able to stop the spread of the Reformation and hold onto roughly half of Europe in one simple but effective way. Rome began to turn a blind eye to the corruption and corruption of the social elite.

The Protestants in this respect were irreconcilable at this time. They used the most terrible Old Testament laws against libertines. A new wave of "witch hunts" began in the German Protestant principalities. Men and especially women convicted of fornication (and it was easy to get under the distribution, any person could snitch on a lovely neighbor who refused him, or the denunciation came from an envious person), were exposed naked at the pillars of shame, where they could be spat upon, thrown with mud and feces , beat up. According to the Old Testament, they were stoned or burned.

In England, the Puritans ("pure") and the Independents ("independent") also zealously tried to correct the mores of society. Parliament passed the "Adultery Law", which prescribed the death penalty for both sinners. The law was initially fully observed. And Protestant "saints" could go into someone else's house at any time of the day and check the behavior of the spouses.

Catholic priests became "liberal". They easily forgave such sins. Rome became a fairly free city. There were strict rules on the streets, but quite relaxed balls and feasts were held in the mansions of bishops, cardinals and in the papal palace. Church hierarchs had their own rich courtyards with artists, architects, poets and mistresses.

In France, this attitude of Rome to sexual excesses played a leading role when there was a struggle between Catholics and Protestant Huguenots. France has traditionally been the most depraved country in Europe. Politics, wars, careers, art were all heavily mixed with hedonism.

Europeans, in principle, had nothing to brag about in front of other peoples and cultures. In the West, there was science and a university education system (influenced by the Byzantine and Arab cultures).

However, the universities then mainly taught empty and confused religious scholasticism and the same jurisprudence (then, in essence, it was the science of deceiving the less educated). Those industries that are now called science, in the middle of the XNUMXth century, only began to form. And often in a random way - at the whim of kings, nobles and church hierarchs who solved some of their tasks.

For example, for the construction of grandiose objects. They paid scientists, architects, sculptures, artists to satisfy their whims, along the way, something useful turned out.

Astronomy, in general, was a "side" branch of astrology. All European nobility was fascinated by horoscopes. And the astrologers who compiled them identified some patterns of the starry sky.

The widespread passion for gambling gave birth to an order for calculating the probability of winning, and the theory of probability arose.

The theater became a "springboard" for the development of mechanics. Pompous performances were staged in Italian and French courtyards. Various cunning mechanisms were considered great chic. And this required mechanics, inventors.

During the construction of fountains (also for the entertainment of the rich), hydrodynamics arose. And mathematics was improved in Jesuit educational institutions (the Jesuits were an order of magnitude superior to their opponents in knowledge), where professors were well paid.

Science did not yet have special practical significance. She was the lot of a handful of enthusiasts. There were 15–20 genius scientists throughout Western Europe: Galileo, Torricelli, Pascal, Beson, Fermat, Descartes, etc.

The laboratories were handicraft, homemade. The results were not published anywhere; acquaintances were notified about them by letters. Scientists had to pay more attention to survival, finding wealthy patrons than scientific research.

In fact, this is nothing more than a legend.

For example, in revolutionary England (English Revolution: Blood and Madness; The English Massacre: Cavaliers vs. Roundheads) the entire old culture was literally swept away.

Composers and musicians were forced to publicly repent. They burned notes, broke instruments. Shakespeare's theater was lost. Parliament has banned public stage works. Repressions fell upon directors, writers, actors and musicians, and many fled abroad. Or they left their previous activities.

The ban included folk holidays, games, dances and songs, in which they saw the legacy of paganism. Even loud laughter was considered perverse. Protestant fundamentalists who had seized power were real fanatics. At the same time, they are dark and stubborn. They demanded to banish everything “sinful” from life, they fought with “devils”.

A similar situation was in Holland, where the revolution won and Calvinism became the official religion. Art was recognized as a sin, and the cost of it

"A waste of money"
which was an even more terrible sin.

Interestingly, Holland became one of the leading industrial centers of Western Europe, the Dutch fleet was the largest and most powerful in the West, Dutch-made ships were bought by all European countries, as well as Dutch goods.

However, at what cost was such a flourishing achieved?

Technical innovations were practically not introduced, the local moneybags were very tight-fisted. Why spend money if they are the masters of life and legislators? If there are other paths to wealth?

First, all government spending was hung on the peasantry. They were literally sucked out by taxes. The worst were the peasants of Brabant, Flanders and Limburg, which Holland captured as a result of the Thirty Years' War. These southern provinces of the historic Netherlands received the status of conquered lands and were exploited as overseas colonies. Local residents did not receive any bourgeois "freedoms" and until the XNUMXth century the peasants there were in a semi-serfdom state.

Secondly, the local industry used practically free labor of workers. Dutch peasants, trapped in the "free" world of capitalism, were massively ruined, property went into debt settlement. Both the homeless and the poor could only go to the manufactories. Disenfranchised workers. In essence, they are slaves to capital.

In England, for this purpose, "fencing" was carried out, when peasants were deprived of land in the interests of developing cattle breeding and industry. There was one more way - to sailors, a huge the fleet commands were required. Life is harsh - without rights, under the sticks of bosses, for any "riot" - the most severe punishment, sticks and death. Someone went to land and sea robbers,

"Stole, drank and on the yard."
And life in factories was then compared to hard labor, galleys and hell. The chances of survival were roughly equal. Dirty and cold barracks full of men, women and children. People were mowed down by disease, hunger and cold. Pennies were spent on drunkenness.

Rulers, lawmakers and business owners knew how to increase profits. Fines and sanctions. Prices for bread, other foodstuffs and goods were constantly inflating. Their value in the "advanced" capitalist country was the highest in Europe. And the salaries are the lowest.

The workers were used for wear and tear, the mortality rate was appalling. But they didn't worry about that. The birth rate of peasants was high, new crowds of poor people constantly poured into the cities. This is how the initial capital was created. Along with the global slave trade, looting and plunder, piracy and drug trafficking.

In the middle of the XNUMXth century, the first strikes of workers took place, which became commonplace. But the oligarchs paid no attention to them. They weren't dangerous. All power and power belonged to the plutocracy (political dominance of the rich). The unrest was severely choked, the leaders were waiting for death or sale into slavery (death postponed for a short period). The capital squeezed out of the subjects was not used for the development of the country, its decoration.

Money brought new money. In 1602 the East India Company established the Amsterdam Stock Exchange. The largest world banks arose in Holland, which gave loans to many kings and nobles. The capital of the Italian elite, founded as a result of the cruel plunder of the Mediterranean (including income from the slave trade and piracy), began to flow here. 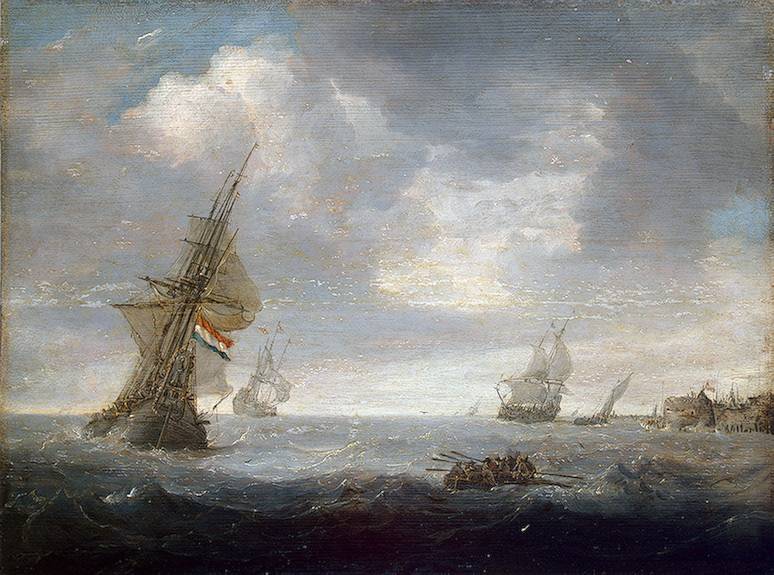 Holland was actively expanding its overseas possessions, building up its fleet. Of the 25 thousand European ships that sailed the seas and oceans, 15 thousand were Dutch.

The Dutch bourgeoisie emerged from the Thirty Years' War in good shape. Holland was not slaughtered, devastated and devastated like Germany. She did not incur such costs and losses as Spain, which waged a war for the entire Catholic world. France also actively fought, suffered losses, external wars alternated with internal fronts and uprisings. England could not then use the problems of the continental countries, since she fell into her turmoil, which led to terrible human and material losses. As a result, Holland got a chance to become the ruler of the seas, to seize a monopoly on world trade.

The leadership of the East India, West India Company gave appropriate instructions to their captains. While the Europeans slaughtered each other on the continent, the Dutch roamed the seas with might and main.

Whenever possible, they robbed any ships - Spanish, Portuguese, English or French. They seized several British trading posts in Indonesia, temporarily occupied part of Brazil. They took possession of New Sweden - a Swedish colony in the area of ​​the river. Delaware.

As a result, the Dutch created their world colonial empire with bases, ports and lands in West and South Africa, North America (including the New Netherlands) and the Caribbean, in South America (the rivers Essequibo, Pomeroon, part of Guiana, Suriname, etc.), India ... The Dutch established their control over most of Fr. Ceylon and Indonesia, displacing the Portuguese and British from there. The Dutch penetrate Formosa (Taiwan) and Japan.

The colonial empire was built on a lot of blood.

The Protestant faith justified any atrocities against "subhumans." Calvinism took over from the Old Testament the theory of "God's chosen" people. It now meant Protestants. The British also built their world empire on the same basis. No mercy for those who were considered "beast". Who can resist the Lord and the “chosen” people?

Therefore, the colonial orders of the Dutch, and then the British, were even worse than the Spanish. Spanish Catholics, like the Portuguese, over time began to consider local residents who converted to Christianity as people, citizens. They took local women as legal wives, did not abuse the descendants of mixed marriages.

In the colonies of Holland and England, everything was different. Here the world was clearly divided into "chosen" masters, white servants (Irish, Scots, Slavs, etc.) and slaves, who were at the level of "two-legged weapons", furniture or shovels. 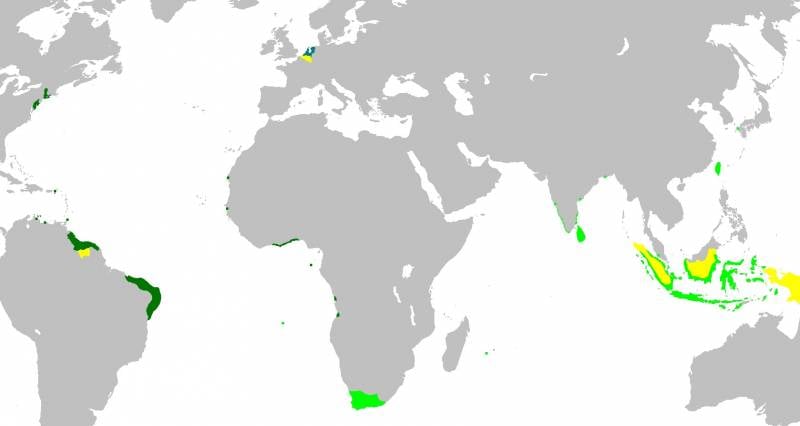 Ctrl Enter
Noticed oshЫbku Highlight text and press. Ctrl + Enter
We are
"I myself decide who is a witch in my land." Vedovskie processes in the Protestant worldChernobyl notebook. Part of 3
Military Reviewin Yandex News
Military Reviewin Google News
183 comments
Information
Dear reader, to leave comments on the publication, you must sign in.