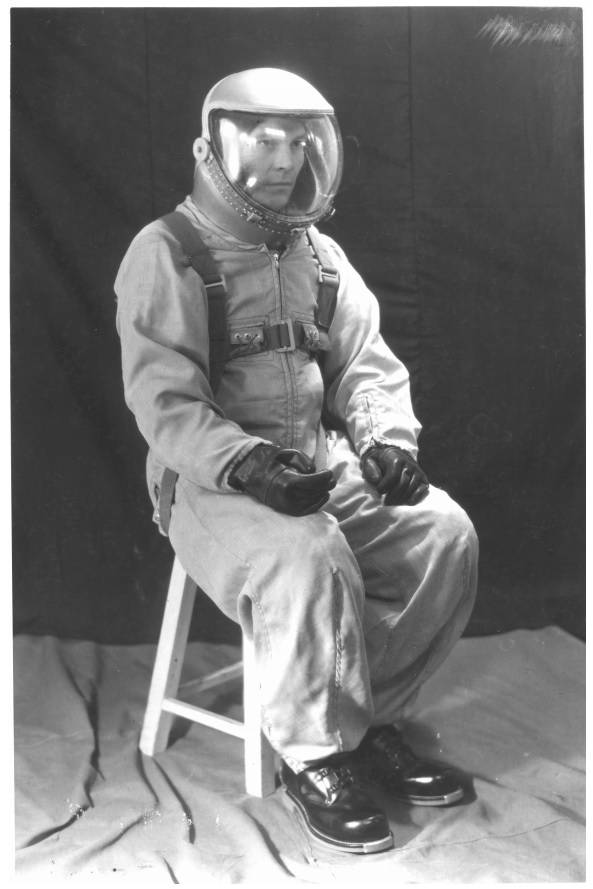 On the eve of the celebration of the sixtieth anniversary of Yu.A. Gagarin's interest in stories first manned space flight. JSC "NPP" Zvezda "and the channel" Walking in the Stratosphere "specially for the readers of the site" Voennoye Obozreniye "offer a series of publications devoted to the history of the development of domestic spacesuits.


Note. JSC NPP Zvezda is the only enterprise in Russia engaged in the development of life support systems for aircraft crews. "Walking in the stratosphere" - a channel of informal feedback of JSC "NPP" Zvezda "with the public.

In the spring of 1959, plant No. 918 (now AO NPP Zvezda) began to develop a spacesuit for the first flight into space.

Sketch designs and drawings were developed. And a little later, two samples of a new space suit, called S-10, were made.
These spacesuits were transferred from plant No. 918 to GNIIIAiKM for joint testing.

The design of the spacesuit and the life support system were designed to save the astronaut when the spacecraft was depressurized during space flight. And also during the ejection at the landing stage.

In addition, the spacesuit provided protection for the astronaut in the event of a splashdown (including in an unconscious state).

The S-10 shell was based on solutions that had previously been successfully worked out and applied on the Vorkuta-type aviation spacesuit and the Sokol aviation complex.

The design of the S-10 helmet was equipped with an automatic closing system for the sight glass.

The role of the S-10 power shell was played by the seat and parachute harness and suspension system integrated into the shell.

The working pressure mode of the spacesuit was 270 kPa (0,27 kgf / sq. Cm) and made it possible to provide the cosmonaut with coolant for 10 days (open circuit) and up to 14 hours from the emergency system (closed circuit).

When entering the dense layers of the atmosphere and after ejection, separate oxygen equipment was used.

Much attention was paid to the rescue of an astronaut in the event of a splashdown in an unconscious state. Since the influence of the conditions of weightlessness and space flight on human well-being was still unknown.

Despite the large amount of work done, in February 1960, OKB-1 abandoned the use of a spacesuit in a manned flight.

And plant number 918 (JSC "NPP" Zvezda ") was given a new technical assignment for the development of a protective suit for an astronaut.

The reason for the refusal to use the spacesuit shortly before the first manned flight was due to the limitations of the Vostok spacecraft mass. And also the well-established opinion among some representatives of OKB-1 is that the risk of depressurization of the spacecraft cabin is quite small (the tragedy of Soyuz-11 finally put an end to the longstanding dispute).

From February to August 1960, the V-10 protective suit was developed to replace the S-3 spacesuit. But the "party" of supporters of the use of the spacesuit was able to win. And in September 1960, the final decision was made to use the spacesuit.

Author:
Dvornikov S.M. JSC "NPP" Zvezda "together with the channel" Walking in the Stratosphere "

Ctrl Enter
Noticed oshЫbku Highlight text and press. Ctrl + Enter
We are
List of destroyed the largest and most high-tech enterprisesHow can Russia survive and win in the 21st century?
Military Reviewin Yandex News
Military Reviewin Google News
6 comments
Information
Dear reader, to leave comments on the publication, you must sign in.