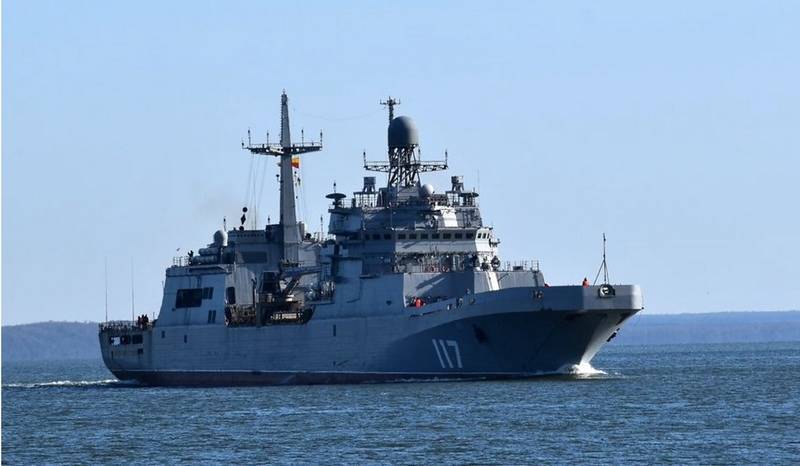 Large landing ship (BDK) "Pyotr Morgunov" of project 11711 completed the inter-fleet passage and arrived in Severomorsk - the main base of the Northern fleet. This was reported by the press service of the fleet.


Commander of the Northern Fleet, Admiral Alexander Moiseev, congratulated the crew of the large landing ship on arrival at the permanent duty station. The ship will become a part of the fleet's amphibious assault ships and will operate mainly as part of the Arctic fleet grouping in the seas of the Arctic Ocean.

The ship will take part in the upcoming exercises of the Northern Fleet. The plans for combat and operational training for him have already been drawn up.
- said the commander.

The large landing craft "Petr Morgunov" is the second ship of project 11711 and the first serial after the lead large landing craft "Ivan Gren". Laid down in June 2015 and launched on May 25, 2018. The construction of the ship was carried out with delays, as it was necessary to correct mistakes made in the design of the lead ship. State tests were completed in early November 2020, the transfer of the Navy officially took place on December 23.

At present, shipyard Yantar is building two Project 11711 ships - Vladimir Andreev and Vasily Trushin. Both BDKs are being built according to a modified project and will become part of the Pacific Fleet.
Ctrl Enter
Noticed oshЫbku Highlight text and press. Ctrl + Enter
We are
BDK "Peter Morgunov" project 11711 continued testing in the Baltic SeaThe first serial BDK of the 11711 project "Peter Morgunov" went to the test
Military Reviewin Yandex News
Military Reviewin Google News
49 comments
Information
Dear reader, to leave comments on the publication, you must sign in.