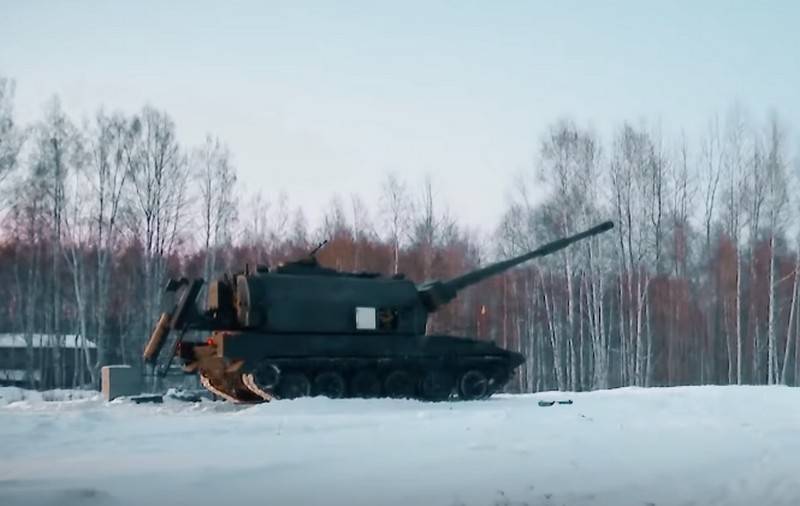 The newest Russian self-propelled artillery installation "Koalitsiya-SV" was tested in the "barrage of fire" mode, the self-propelled guns confirmed the ability to hit the target with several shells simultaneously. Reported by RIA News with reference to a source in the DIC.


During the tests, the details of which are not given, the "Coalition-SV" fired in a "barrage of fire" mode, hitting the target with six shells. The shells were sequentially fired along different ballistic trajectories and hit the target simultaneously, hitting it.

As the source of the news agency explained, in this firing mode, the first projectile is fired at a large elevation angle of the gun using a full propellant charge, the second with a reduced charge and a reduced elevation angle, the third along a flatter trajectory with an even lower charge, etc. The charges are placed in the automatic loader in advance, the ACS itself calculates the elevation angles for the given target coordinates and automatically makes the necessary adjustments when firing.

The fire control system "Coalition-SV" provides almost instant automatic calculation of the gun elevation angles and pauses between shots for the "squall of fire" mode, depending on the range to the target, the location of the installation itself, weather conditions, wind direction, and so on.
- explained the source.

Serial deliveries to the troops, according to available information, will begin in 2022.
Ctrl Enter
Noticed oshЫbku Highlight text and press. Ctrl + Enter
We are
Domestic depth chargesIn search of available accuracy. New developments in the field of large-caliber ammunition
Military Reviewin Yandex News
Military Reviewin Google News
118 comments
Information
Dear reader, to leave comments on the publication, you must sign in.