If you try to describe the army footwear of the countries participating in the Second World War in one word, then for the German it will be "quality", for the British - "conservatism", and for the American - "search".

Let's figure it out together.

Until 1939, an American infantryman walked in field boots similar to British ones. With the same windings in which he was shod during the First World War. This is understandable - the shoes were designed for internal service.

But the fire of a new division of the world broke out in Europe. And it became clear to the overseas strategists that participation in the fight could not be avoided. Feverish development of new types of weapons began. And along with the ammunition.

The windings were abandoned. At first, the boots did not differ much from their predecessors. They became a little higher.

They were called "Service Shoes" of the first sample. Made of glossy brown dyed leather. They had leather soles and heels. All this abundantly "showered" with thorns.

Came out expensive. And unreliable.

During military maneuvers in the 1940s, the leather sole would fail after three weeks.

The boots were removed from the security. And they quickly began to develop a new type.

However, there are photographs where, during the landing in Normandy, the Americans attacking coastal fortifications were shod in such boots. Apparently, the rangers realized that it was more convenient to land on the rocky shore with thorns, and took out supplies from the warehouses. This is how they looked, by the way. 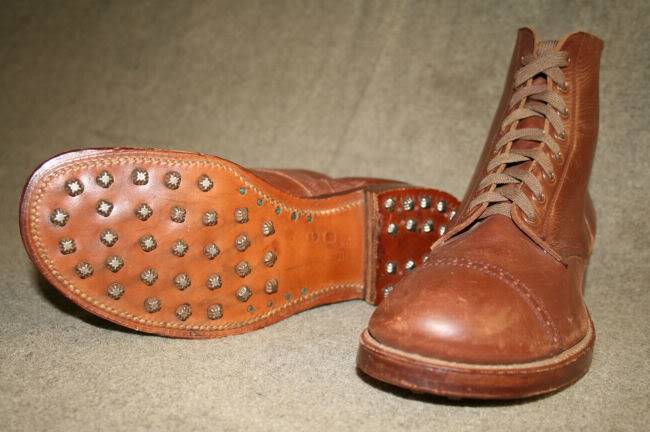 The result of the modernization was the emergence of a model called "Shoes Service Composition Sole" in early 1941. That is, its main difference is the sole. Thick, rubber.

The boot itself, as before, was made of glossy leather of the same brown color. But they began to sew an additional piece on the nose. For durability. The number of lace eyelets remains eight on each side.

The sole was sewn with a double stitch to the "body" of the boot. And in some cases the heel was reinforced with nails.

The boots came out great.

But not without flaws. Quality patent leather looked good both in parades and in the field. I didn't get wet for a long time. But, getting wet, it did not dry out just as long. How does wet skin rub your foot? In general, that is still torture. In addition, despite the triple stitching, the joint between the top and bottom of the boot often ripped. 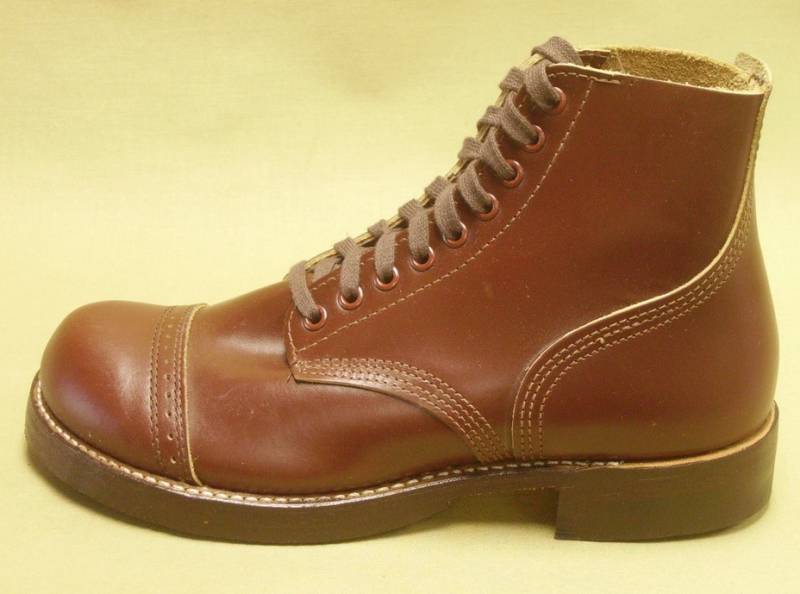 Taking into account the above factors, in 1943, the developers provided the army with army boots (Service Shoes) of the third type.

This boot was even better suited to combat. The main difference is the material of manufacture. Now shoes were sewn from inverted leather. This material got wetted faster. But it also dried out almost instantly.

The weak junction of the top and bottom was reinforced with a rivet, like jeans pockets. It has become much stronger. It stopped tearing at the seams. Made the stitching of the nose of the boot and the sole more technological.

Here is a picture of the third model. 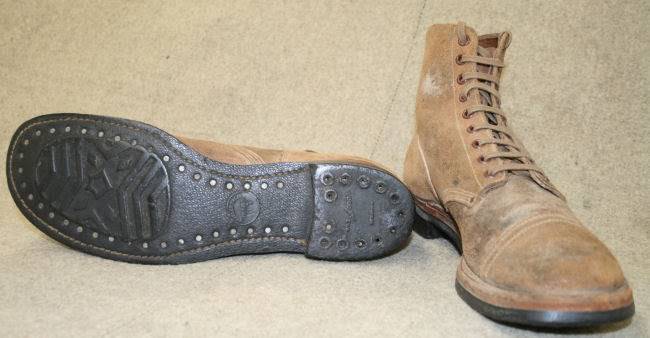 But the shoemakers did not sit quietly in place.

In the same year 1943, the fourth model of Service Shoes Reverse Upper appeared. Figuratively speaking, it was a simplified third type, but with the correction of the identified minor flaws.

The material is the same inverted leather, but thinner and therefore more elastic. An additional nose pad and upper eyelets were removed from the design. So the leg did not rest against the skin when bent and did not rub it to bloody wounds.

The outsole was made with thinner and softer rubber. 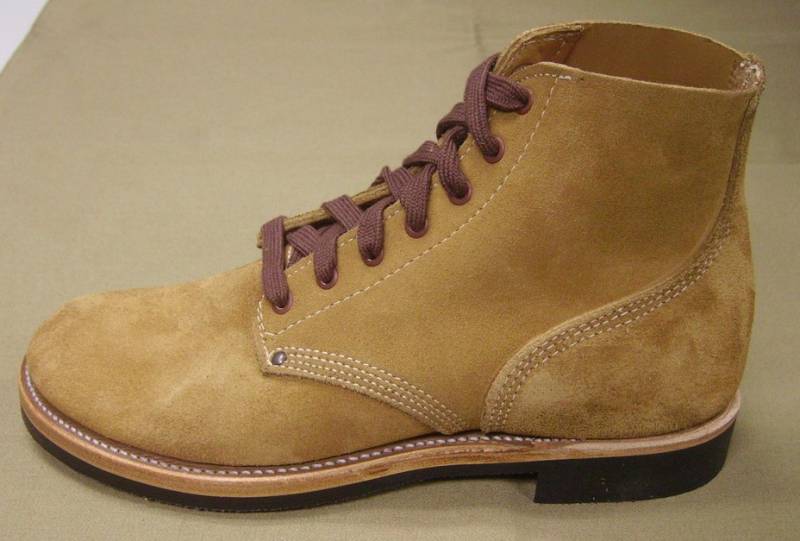 All this diversity existed until the winter of 1944.

And then everything changed again.

The fact is that in 1943 the fifth model was developed - "Service Combat Boots". But due to the workload of the industry, they did not have time to launch this model. And the updated boots began to enter the troops just before the defeat of Germany and Japan.

The main difference from the previous model was that they began to sew a leather gaiter with two straps to the bootleg, saving the infantrymen from the difficult and time-consuming process of lacing canvas gaiters. Which at one time replaced the inconvenient windings.

The new boots instantly became popular among the troops.

From the inside, the gaiter was hemmed with white or olive cotton fabric.

Yes, there was one more innovation. The rivet previously used to strengthen the fastening of the top and bottom was removed from the boot structure.

In connection with what? It was not possible to find out this. 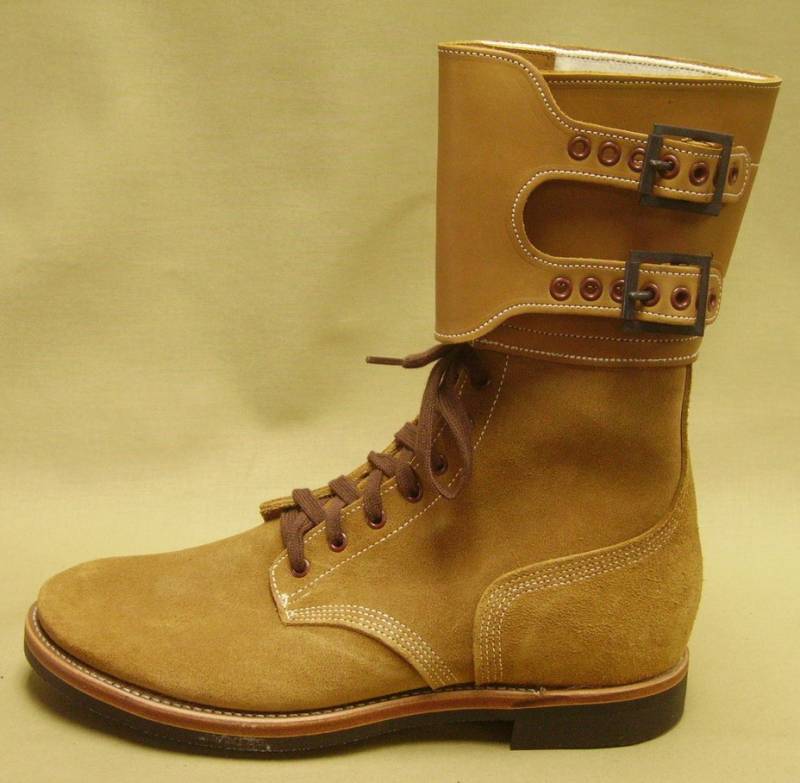 And finally, I want to show all the charm of fastening and lacing of American army gaiters. 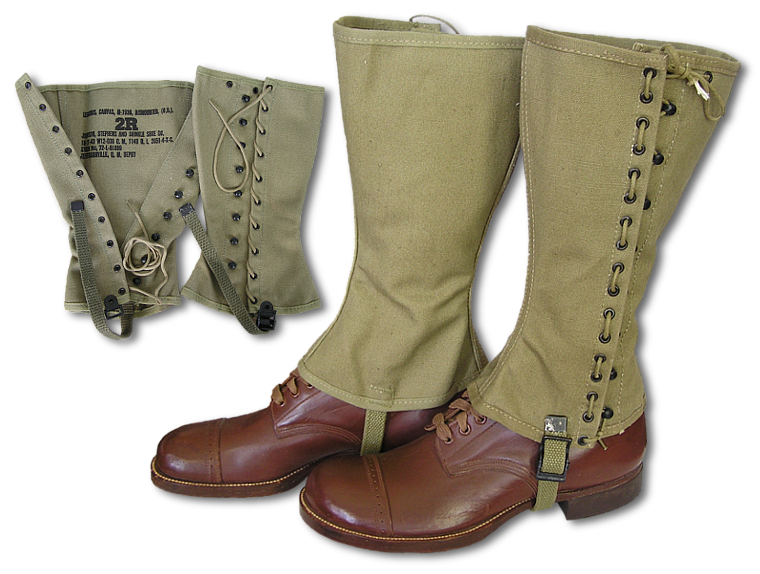 Ctrl Enter
Noticed oshЫbku Highlight text and press. Ctrl + Enter
We are
A great interview with Sergey Lavrov: about Ukraine, Obama and IranWhat you didn't want to know about England
Military Reviewin Yandex News
Military Reviewin Google News
83 comments
Information
Dear reader, to leave comments on the publication, you must sign in.