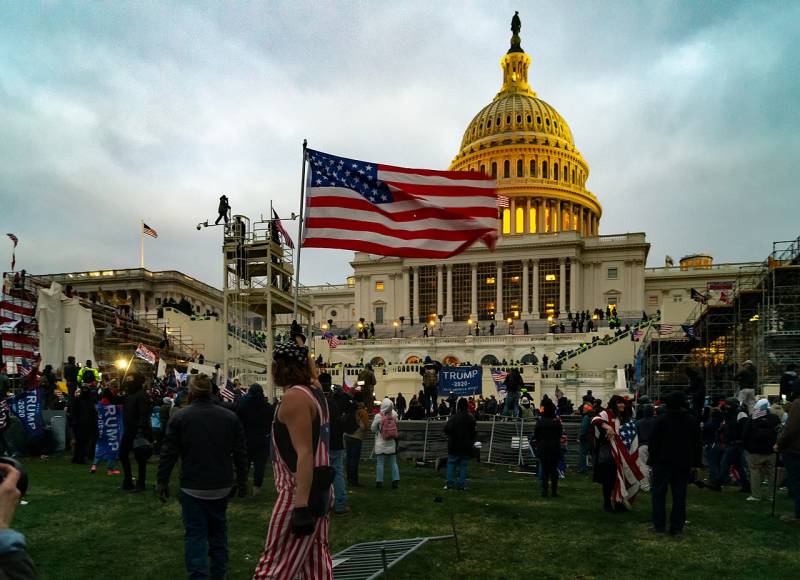 The whole world is currently following events in the United States. This is not surprising: after all, it is the second economy and the first military budget in the world.

People are trying to understand: what is happening in this country?

In my opinion, this is well shown in the Soviet cartoon "Dragon".

Its essence is that power turns people into monsters. This is exactly what we see, observing both individual people in power in the United States and entire social groups.

Thus, one of the two leading political parties - the democratic, trampling on all conceivable and inconceivable norms of behavior in the struggle for the throne, went to great lengths to seize power by falsifying the presidential elections. I will not list - there was enough information about this.

In the country, under the guise of elections, a coup d'etat actually took place.

Now the usurpers go to great lengths to legitimize and retain this power. To do this, they staged a provocation with the capture of the Capitol and use it to crack down on all those who cannot agree with the criminal seizure of state power.

And the violence will be brutal. They have already begun - stock up on popcorn.

Everything goes according to the old scheme. So it was in the USSR with a provocation in the form of a caricatured GKChP, and in Ukraine with a provocative Maidan, so they are trying to destroy Belarus with provocateurs-protestors.

And before, everything went the same way. Let us recall at least the velvet revolution in Czechoslovakia, which occurred as a result of a provocation with the fictitious murder of a student.

There is no doubt that the new Dragon in Washington will destroy all the disobedient cruelly and mercilessly. This is confirmed by the victories of dragons in the social organism of this country.

Thus, the BLM movement, which officially opposes racism, is in fact precisely racist, not canceling this phenomenon, but only changing its color from white to black. And the Antifa movement, contrary to its name, operates by the same methods as the stormtroopers of Nazi Germany. And its current name is just an informational mask that hides its true essence.

So the main Dragon, now digging in the White House, has someone to rely on.

Moreover, the role of the tax collector from the cartoon, announcing:

“The rebel has fallen! Glory to the Dragon! "
successfully carries out the "deep state" through newspapers, radio, TV and social networks.

For obvious reasons, these funds are still called mass media, although, soberly assessing their role, they should be called SMPP - means of mass psychological defeat. Their use, as recent decades have shown, destroys states no less effectively than weapons of mass destruction.

But even after the inauguration, deep down, everyone will know that

"The king is not real",
I mean: the president is illegitimate.

"I know you know what I know."
And for this reason, the United States will have certain difficulties.

Therefore, we can say with complete confidence that Biden is a fakir for an hour, and after a short time the SMPP will announce "Glory" to the new Dragon in the White House. More precisely - the Dragon. And the new monster, asserting itself, will demand new blood.

The main thing for the world is that the struggle of American dragons for power does not spill over the borders of the States.