Was the assassination of the Duke of Enghien the cause of the 1805 war? 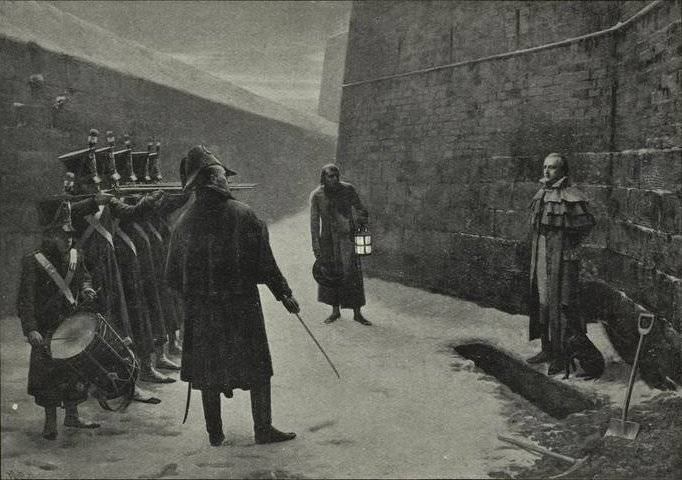 Since 1803, Napoleon Bonaparte has been preparing an invasion of England. He believed that "three foggy days" would give the French ships the opportunity to elude the English and land on the shores of England.

Did the British believe in the possible success of the French? Undoubtedly. If from the very beginning of the preparations they ridiculed the actions of Napoleon, then from the end of 1803 they had no time for laughter. Decisive action was required.

The Chouan chieftain Cadudal was an ardent opponent of Bonaparte and had the greatest hatred for him. He often visited London, where he had conversations with Charles d'Artois, who was the brother of the future King Louis XVIII. The British government soon realized that the royalists were plotting yet another conspiracy. Realizing that they could not displace Bonaparte through an uprising, they decided to kill him.

The Chuan have already attempted to assassinate Napoleon using the "infernal machine". Now the conspirators have chosen a different method. It was assumed that Kadudal and several other people would attack the First Consul when he rode on horseback near his country palace. The conspirators also managed to enlist the support of Generals Moreau and Pishegru.

But their plan never materialized. Thanks to the quality work of the French police, the conspiracy was uncovered. In February 1804, Moreau and Pishegru were arrested, and a few days before the execution of the Duke of Enghien, Cadudal was arrested.

The arrest and execution of the duke

The French government managed to establish during interrogations that after the assassination of Bonaparte, a "French prince" should have appeared in France, "but he is not there yet." It seems that the name of this prince was kept in deep secrecy, for none of the conspirators knew him (or simply did not want to speak).

The Duke of Enghien was more suited to this role than anyone else. At this time, he lived in the city of Ettenheim, which was part of the Baden Elector's Office. The main agitator for the arrest of the duke was French Foreign Minister Talleyrand. He considered the execution of the duke profitable for himself, since he wanted to prove to Napoleon his zeal in protecting his life, and also wanted to terrorize the royalists with this execution, still fearing for his fate in the event of the restoration of the Bourbons. 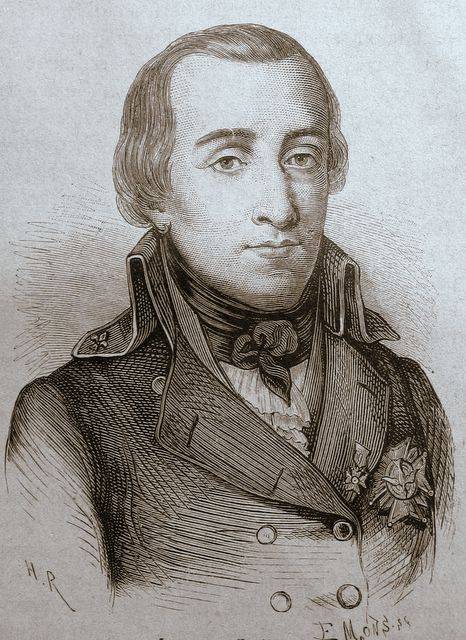 Duke of Enghien
The situation with Talleyrand after the return of the old dynasty to the French throne is noteworthy. In 1818, the father of the murdered duke arrived in Paris. A meeting was to take place between them. Talleyrand, wasting no time, makes acquaintance with a woman close to the prince and tells her that it was he who tried to stop Bonaparte in his desire to execute the duke, that it was he who sent a note to the duke asking him to save himself, etc. The prince, oddly enough, believed. At the meeting, he rushed to thank Talleyrand for his "heroic" behavior.

On March 15, 1804, the house of the Duke of Enghien was surrounded by gendarmes. His armed servants wanted to resist, but it was obvious that the fight was useless. Already on March 20, he was taken to the Vincennes castle near Paris. On the same day, the trial of the duke began. He was found guilty of complicity in a conspiracy against the First Consul. On March 21, he was shot.

Reaction to murder and aftermath

In France, this event did not cause much excitement. If they spoke on this matter, then only with the support of the first consul. A rather eminent representative of the old nobility said:

Do the Bourbons think they will be allowed to plot with impunity? The First Consul is mistaken if he thinks that the non-emigrated hereditary nobility is so interested in the Bourbons. Didn't they treat Biron and my ancestor and so many others?
It was impossible to sit idly by while they constantly organize assassination attempts on you. Bourbons sowed troubles and conspiracies with enviable regularity. Historian Frederic Masson wrote:

He had to hit so hard that London and Edinburgh would finally understand that this was not a game. He had to strike openly, so that the dukes and the Comte d'Artois, seeing the royal blood flowing, would think for a moment.
But the assassination of the Duke of Enghien became a real holiday for the Russian emperor Alexander I, who has been since 1803 (I refer the reader to my previous article “For whose interests Russia fought against Napoleon? ”) Began to form a coalition against France. The murder was the perfect pretext for starting a war.

Alexander approved the note of the Resident Minister Klupfel to the Sejm of the German Empire in Regensburg on April 20. It said:

The event that recently took place in the possession of His Grace the Elector of Baden and which ended so sadly, deeply saddened the Emperor of All Russia. Naturally, he was very upset by this encroachment on the peace and territorial integrity of Germany. E.I. V-vo was all the more depressed by this because he could in no way expect that the power that mediated with him and, therefore, undertook to share with him his concerns about the welfare and tranquility of the German Empire, would be able to do so deviate from the sacred principles of international law and from its recent obligations.

E. I. In-in, undertaking a demarche dictated by considerations that are of paramount importance for the welfare of the German Empire, he is convinced that the Imperial Diet is just like the head of the empire, giving due to his cares, as disinterested as they are absolutely necessary , will immediately join him and will not hesitate to file their just protest with the French government in order to induce it to agree to all measures and demarches that it will have to take to satisfy the insulted dignity of the German Empire and to ensure its future security.
Alas, this proposal did not get the support of the Diet. After the document was read out, the Baden electorate suggested moving on to other issues, without wasting time on extraneous matters. Alexander was perplexed by such a reaction, but did not attach much importance to it, because he counted on support from Austria and Prussia.

This outrageous act of abuse of power and oblivion of all that is most holy was greeted by the emperor with the indignation he deserves. EI V-vo did not hesitate to express his grief over the death of the Duke of Enghien, declaring mourning at court.

But having paid tribute to the memory of this unfortunate prince, he considered that he would sacrifice his dignity if he did not officially condemn Buonaparte's actions in the face of all of Europe. To this end, Mr. Klupfel was ordered to submit a note to the Sejm in Regensburg, which should notify the imperial states and the head of the empire about the displeasure of our august sovereign over the violation of territorial inviolability and international law that the French government allowed itself in Germany, and also invite them to join to him to claim satisfaction.

E. I. V-vo, however, does not think that he should wait until they join him in order to undertake a demarche before the first consul, which he deemed necessary, and you, my dear sir, should present the note attached here under the letter "A", immediately after receiving it and insist on a quick and categorical answer. And since, given the well-known unbridled temper of Buonaparte, it can be expected that the energetic actions taken by our court in this case can cause any extreme decisions on its part, you, sir, are prescribed in case you receive on your note an answer that is insulting to the emperor, or if you see that they are going to invite you to leave France, or if you find out that General Gedouville will be ordered to leave Russia, then you will hand over the note that you will find in the appendix under the letter "B", and you will demand your passports, giving this demarche the widest possible publicity. 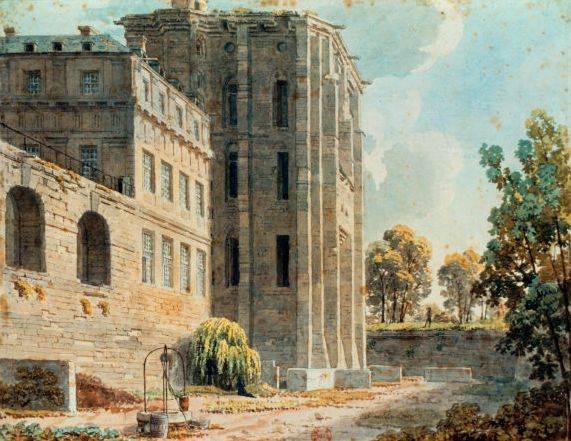 Weeping willow bush at the site of the Duke's execution. 1820s watercolor
Napoleon exploded. He regarded Russia as his potential ally against England. He did everything to make this alliance concluded. During the reign of Paul I, the alliance almost took place, but the palace coup turned Russian politics upside down. Napoleon, even after the death of his friend, did not stop looking at Russia as an ally, but Alexander, driven by his personal hatred for Bonaparte, went to confront him, although our country did not have the slightest reason for this.

After reading the note, Napoleon orders Talleyrand to write a response letter to the Russian government. The minister did his job perfectly by writing a letter with the following content:

The complaint that she (Russia) is making today makes one ask if, when England was plotting the assassination of Paul I, it was possible to find out that the conspirators were one league from the border, would they not hasten to arrest them?
These words were a real slap in the face for Alexander. He was given to understand that he should not be so worried about the situation with the Duke of Enghien while the murderers of Paul I are walking with impunity in Russia. The letter strengthened in Alexander the hatred of Napoleon.

Monsieur Count, the stubborn silence that the Viennese court has kept for so long about the proposals we made to him regarding an agreement on joint measures with the help of which it would be possible to curb the overstepping all borders and the ever-increasing lust for power of the French government is beginning to surprise the emperor. EI V-in vainly tries to explain this by considerations of caution, which could have been appropriate at a time when they still hoped to return the first consul to greater moderation with condescension and gentleness; but it should no longer take place after the First Consul gave to his plans, aimed at undermining all order and tranquility in Europe, such a terrifying scale, growing every day.

The Ettenheim event and the ensuing atrocity should clearly show all of Germany what to expect from a government that so openly shows disregard for international law and generally recognized principles of justice. Convinced more than ever before in the need to take repressive measures, the Emperor, wishing to end the uncertainty in which he is in relation to the decisions of the Viennese court and more intolerant in the current tense situation, orders V-woo to resume before the Austrian Ministry in the most decisive and categorical form insistence on this subject.
Austria was not eager to engage in a fight with France. As a result, a letter from Franz II came to Petersburg on May 4, where he agreed with all of Alexander's views, but was ready to conclude only a defensive alliance. 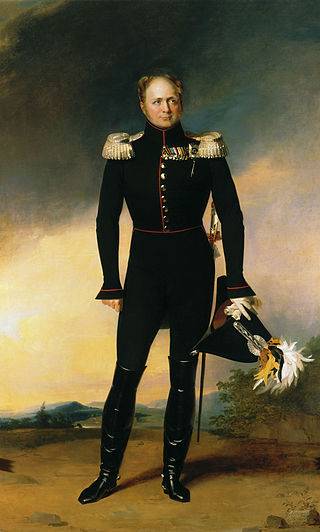 Portrait of Alexander I by George Doe. State Art and Architecture Palace and Park Museum-Reserve "Peterhof"
Similar letters with calls to join the anti-French coalition arrived in Berlin, Naples, Copenhagen, Stockholm and even Constantinople.

And yet, the countries did not want to enter a war that was meaningless for them over the murder of a prince. Russia itself was not particularly interested in this. Count Nikolai Rumyantsev said:

... The decisions of His Majesty must obey only state interests and ... considerations of a sentimental order can in no way be admitted as a motive for action ... The tragic event that has taken place does not directly concern Russia, and the honor of the empire is not affected in any way ...
But did Alexander care about the interests of his country? Looks like no.