Have you seen a falcon here? Generic signs of Rurikovich

January 17 2021
182
In the previous article, we examined in detail and criticized the thesis about the possible Slavic origin of the name "Rurik". In this article we will consider the statement that the Rurikovichs used as their generic (some even use the word "heraldic") symbol, namely the "sign of the falcon".

Why is a generic mark needed?

Let's start with the fact that at the time of Rurik (remember, this is the second half of the XNUMXth century), neither heraldry nor any coats of arms, in the sense that we attach to these concepts today, in Europe, both Western and Eastern, even and out of the question.

So if we do not go to extremes and begin to assert that it is the Slavs who are the founders of European heraldry and the authors of the first coats of arms, thus outstripping “enlightened Europe” by a good three centuries, then we will have to use the terms “generic sign”, “sign property "or" tamga ". Moreover, to a large extent, these concepts are synonymous.

In those early years, there were not so many soldiers (and, accordingly, the leaders who commanded them) that they could be confused on the battlefields, so identifying one or another commander on the battlefield was not yet such a difficult task as several centuries later. ...

The leaders of the squads, as a rule, knew each other very well, if not by sight, then at least by hearsay. As a last resort, they could introduce themselves to each other immediately before the showdown.

So there was no special need for the mandatory wearing of some distinctive signs for warriors and leaders then - verbal portraits or some other distinctive features, such as a dragon's head on the nose of a drakkar or a golden cloak ("golden luda"), were enough from the notorious Yakun, a comrade-in-arms of Yaroslav the Wise in the Battle of Listven.

This, however, does not mean that any distinctive signs were not used by the leaders at all. It was just that their purpose was different from that of coats of arms and banners.

These signs were, as a rule, simple and unpretentious. And modern researchers even find it difficult to answer the question whether in most cases they carried any semantic load for their owners, or were they just a set of strokes, convenient for reproduction on any surface.

There are hundreds of examples of such signs. Especially often, for obvious reasons, they were used by steppe nomads and their neighbors.

Such signs were the personal mark of their owners. And they did not pass completely by inheritance from parents to children. However, members of the same family could use similar signs that have a single base and differing details from each other, and these differences could be significant.

Signs of the first representatives of the dynasty

With regard to the princes-Rurikovich, for the first time with such a sign, which can be absolutely reliably compared with its owner, we come across, examining the seal of Prince Svyatoslav Igorevich. This sign looks like this. 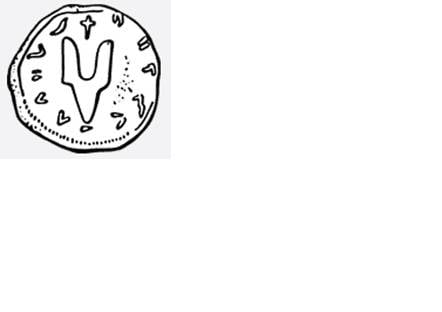 The figure shows that the personal sign (seal) of Svyatoslav Igorevich is a stylized inverted letter "P". Or a "bident" with a stand in the form of a triangle pointing downwards.

It is clear that the researchers were immediately interested in the question - when this sign first appeared in Russia.

In search of an answer, coin hoards found on the Dnieper and Volga trade routes greatly helped. The fact is that some of the coins have marks, the so-called "graffiti". And among them it is not so rare to come across signs that are similar in configuration to the symbol on the seal of Prince Svyatoslav Igorevich.

The oldest of these treasures dates back to 885 at the latest. This treasure contains a silver Arab dirham (minted in 878), on which you can see such a sign. 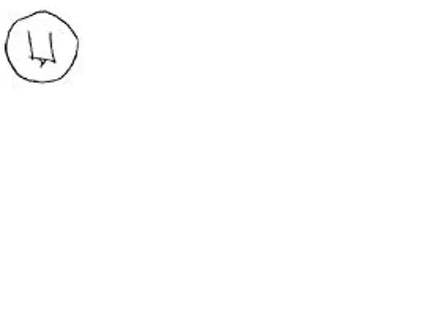 It turns out that this sign was inscribed between 878 and 885. And this is the period of the chronicle rule of Rurik in Novgorod.

Of course, on the basis of such a single find, we cannot assert that this is a sign of Rurik. Similar (I emphasize - similar, not exactly the same) signs were used in the Khazar Kaganate. And the coin could get such a mark there, and then arrive on the territory of Russia together with some Khazar merchant.

However, it is also impossible to ignore the obvious similarity between the sign of Svyatoslav and the symbol found on this coin.

Moreover, there are several more coins with similar images, which date back to somewhat later dates.

For example, a coin from the hoard near the village of Pogorelschina, hidden in the period up to 920, that is, during the reign of Igor Rurikovich. On which is inscribed such a sign. 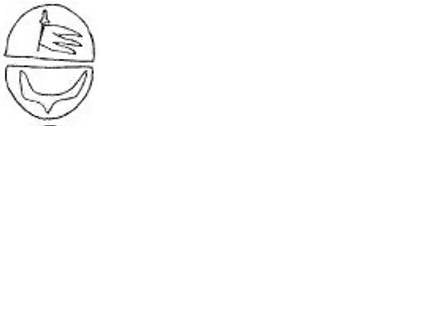 The development of the sign itself is also quite clearly demonstrated. 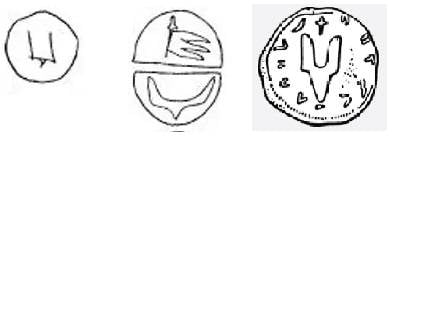 So the assumption that the first coin bears the mark of Rurik does not seem so hasty. However, it will be possible to finally clarify this issue only with the accumulation of new and systematization of the available archaeological material.

Nevertheless, it becomes quite obvious that initially the sign of the Rurik dynasty was not a trident, but a bident. It was this symbol that Prince Svyatoslav Igorevich used and, possibly (and even very likely), his father and grandfather. As you can see, this sign has nothing in common with the attacking falcon in the form of a classic trident.

When did this very trident appear in the system of generic signs of the Rurikovichs?

And he appeared already with the children of Svyatoslav.

S.V. Beletsky, on the basis of his research, recreated the evolution of the signs of the Rurikovich, visually presenting it in a kind of family tree. 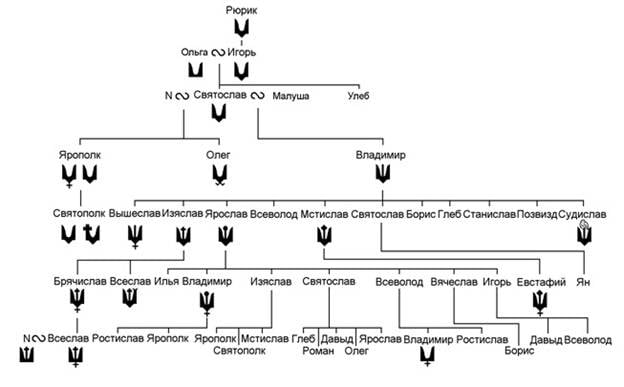 The diagram needs some comments.

We see that from the offspring of Svyatoslav Igorevich, two of his legitimate children, Yaropolk and Oleg, retained the bident as the basis of their generic sign. Whereas his third son Vladimir attached another middle tooth to the bident, thus forming a kind of trident.

This is how this sign looks on the coin of Prince Vladimir. 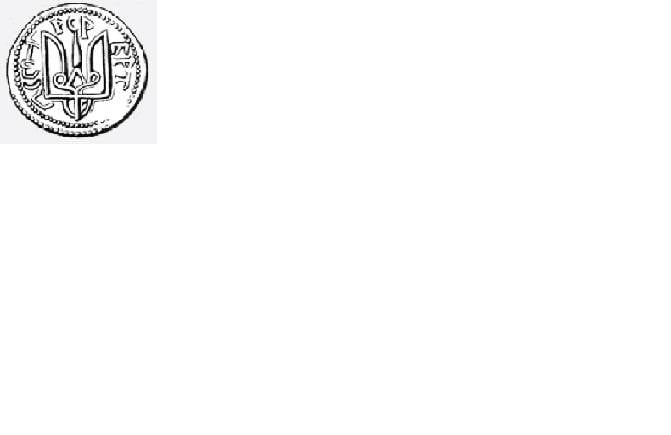 The third tooth is still much thinner than the others. And the whole sign still cannot lead to associations with a diving falcon. S.V. Beletsky (apparently not unreasonably) believes that the middle prong in the sign of Vladimir could be a symbol of his bastardism.

I would like to draw your attention to one more subtlety displayed in the diagram. Namely, the fact that Yaropolk Svyatoslavich and his son Svyatopolk Yaropolchich each used two images at once. Moreover, in both cases, one of these signs exactly repeats the symbol of Svyatoslav Igorevich himself - a simple bident.

Having seized power, Vladimir Svyatoslavich, for some reason, did not change his patrimonial sign. However, his nephew Svyatopolk, apparently being in some kind of opposition to Vladimir and considering Yaropolk to be his father, and his superiority over the descendants of his uncle-bastard, undeniable, began to use a simple two-pronged sign as his generic sign - a sign of his father and grandfather.

This behavior of his nephew was regarded by Vladimir as a challenge and resulted in the conflict of 1013, as a result of which Svyatopolk, among other concessions to Vladimir, changed his patrimonial sign, adding a cross to his left prong.

The result of the political struggle after the death of Vladimir Svyatoslavich was the death of Svyatopolk and the suppression of the older and legitimate branch of the Rurik dynasty. As a result, Svyatoslav's bident gave way to Vladimir's trident. His sons used only tridents as a generic sign.

The most famous of the sons of Vladimir, Prince Yaroslav the Wise, used the following sign. 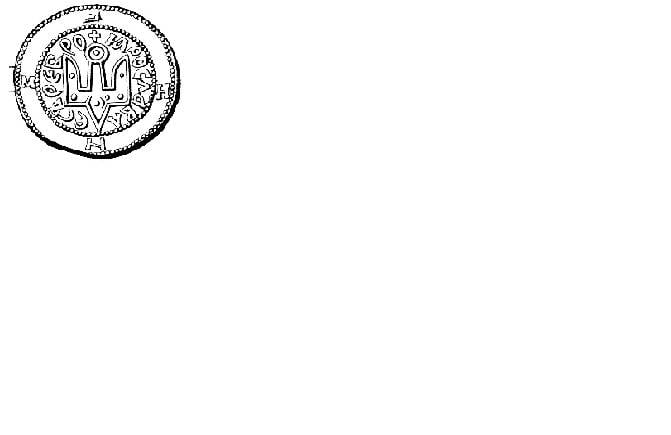 In this sign, with a certain imagination, you can already see the silhouette of an attacking falcon. It was he, apparently, who became the basis of the legend about the "falcon" origin of the sign of Rurikovich.

Supporters of this legend, however, as a rule, do not take into account the fact that in the future (up to the XIII century) the princely signs continued to change, sometimes transforming beyond recognition. So, for example, the generic signs of the descendants of Yaroslav the Wise looked. 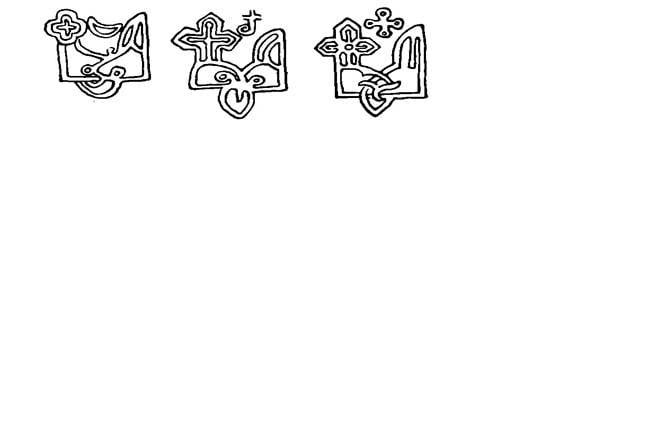 These are generic signs, respectively, of the son of Yaroslav the Wise Izyaslav and his grandsons Yaropolk and Svyatopolk Izyaslavich. 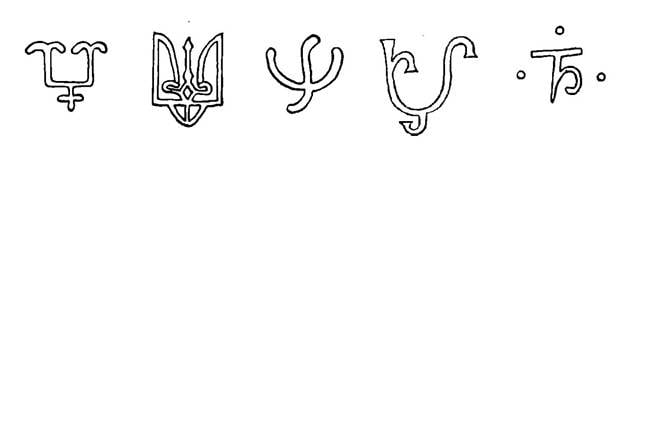 And these are the generic signs of the princes of Rostov-Suzdal, and later Vladimir-Suzdal land: successively Vsevolod Yaroslavich, Vladimir Monomakh, Yuri Dolgoruky, Andrei Bogolyubsky and Vsevolod the Big Nest.

Or, for example, this is how the generic signs of the princes of the Chernigov branch looked like. 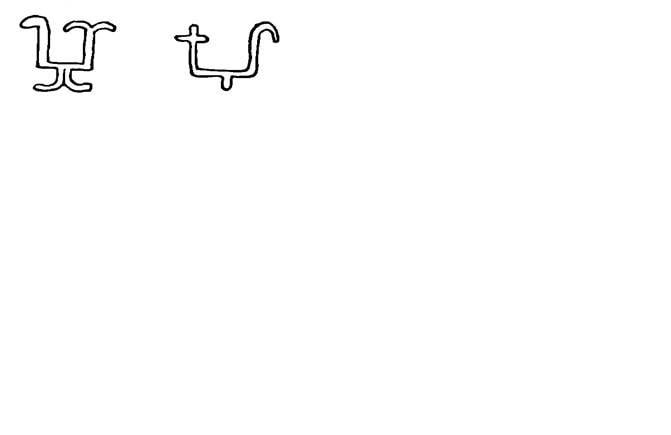 This figure shows, respectively, the generic symbols of Prince Oleg Svyatoslavich (the ancestor of the Chernigov Olgovichi) and his son Vsevolod Olgovich, who also occupied the great Kiev table.

As you can see, these signs in the overwhelming majority do not even remotely resemble a falcon.

There are many variations of the image of the generic sign of the Rurikovich. It doesn't make much sense to list them all in this article.

In some of them, with a special desire, you can see a falcon. Others, like the sign of Oleg Svyatoslavich, are more like a cat. Or, as a sign of Andrey Bogolyubsky, on a swan. But the general meaning of these symbols will not change from this - they all come from the original bident of Prince Svyatoslav Igorevich, who, in turn, with a high degree of probability is the heir to the generic sign of his father and grandfather.

Thus, the thesis that the ancestral sign of the princely dynasty of Rurik was a stylized falcon in attack (as well as the thesis about the Slavic origin of the name “Rurik”) seems to be refuted.

However, not all so simple.

In the next article, we will take a closer look at one find made by professional archaeologists in 2008. Which, on a superficial examination, threatened to significantly change the ideas of historians about the era under study.