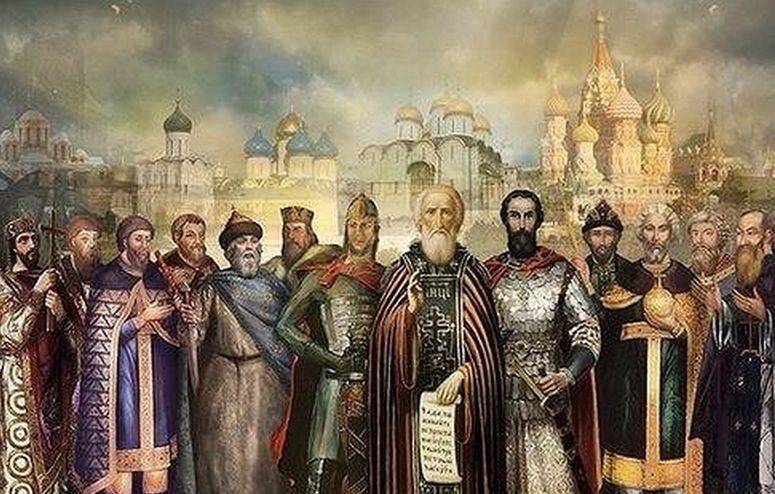 "How much of this sound has merged for the Russian heart ..."
In this article, I do not want to go all over again, proving the Norman origin of the founder of the ruling dynasty of the Old Russian state.

Enough has been said about this. As far as I know, nothing new on this issue has appeared in historiography recently.

And, in the end, is it so important what language his mother or nurse spoke to Rurik? For me personally, this question is far from being of primary importance.

It is much more important to understand and more interesting to discuss the role of the Scandinavians in the formation of the Old Russian state as a whole, as well as the degree of their influence on economic and political processes in the course of its creation and further development.

Today we will talk about the so-called

"Coat of arms of Rurik" or "falcon of Rurik".
And also about the possibility of interpreting the origin of the name "Rurik" on behalf of the ancient Slavic deity Rarog.

This question, as it turned out, is not so simple. And that's why it's interesting.

Is Rurik a Slav?

So, let's formulate a hypothesis. And in the course of our research, we will try to either confirm or deny it.

The hypothesis in its most general form will sound as follows:

“The name“ Rurik ”is not necessarily a proper name.

It can also be either a nickname or a title of the Slavic prince who became the founder of the ruling dynasty of the Old Russian state.

It comes from the name of the ancient Slavic god Rarog, who was represented by our ancestors in the form of a falcon.

Or from the West Slavic word "rerik", meaning, in fact, "falcon".

This is reflected in the generic symbolism of the Rurikovich. Namely, in their generic sign, depicting an attacking falcon. "

I think this formulation should suit most of the supporters of this hypothesis. In all its variants.

I draw the readers' attention to the fact that in this hypothesis the similarity of the names of Rurik and Rarog, as well as the "falcon motives" in the symbolism of Rurik, are precisely the arguments confirming the main thesis - the Slavic origin of Rurik.

The construction logic is simple and straightforward.

Rarog (or "Rerik", in this case it doesn't really matter) is a Slavic falcon. The Rurik people used the falcon in their ancestral heraldry. Consequently, the name Rurik is a distorted name Rarog (go "Rerik"). This means that Rurik himself is a Slav.

For the first time such a hypothesis was voiced by S.A. Gedeonov in his research "Varangians and Rus".

In Soviet times, the same version was supported to some extent (very carefully) by A.G. Kuzmin and O. M. Rapov, using very streamlined formulations for this. So, for example, A.G. Kuzmin in his article "Varangians and Russia on the Baltic Sea" literally wrote the following.

Already S. Gedeonov drew attention to the connection of the generic sign of the Rurikovichs with the symbol of the reregs - the falcon ...

It can be assumed that it was the natives of the tribe of Reregs, "Frankish" Slavs, Rus "from the Franks" who seized power in Kiev at some stage (hence Rurik - Rereg).

But it would be wrong to confine oneself to one dynasty, one tribe, and even one ethnic group in explaining different facts of the Russian stories.
O. M. Rapov in his article "Signs of Rurik and the symbol of the falcon" expressed himself more specifically.

This researcher drew attention not only to the symbolic similarity of some emblems used by the princes-Rurikovich, with a diving falcon (which we will talk about in more detail a little later), but also to the fact that Russian princes were called "falcons" in epics and in such an iconic work Russian literature as "The Word about Igor's Regiment." The authenticity of which, thanks to the achievements of such a science as historical linguistics, is currently beyond doubt.

Citing numerous examples of the mention of such names, O.M. Rapov writes:

The fact that the princes from the house of Rurikovich are called epics and the "Word about Igor's Regiment" "falcons", speaks for the fact that the falcon was the emblem, the coat of arms of the clan that headed the feudal elite of Kievan Rus.

It is possible that the falcon in ancient times was the totem of the clan from which the princely family came.
It is noteworthy that even by “tying” the symbol of the falcon to the dynasty of the rulers of the Old Russian state, OM Rapov, nevertheless, did not begin to conclude on this basis about its obligatory Slavic origin. And he limited himself to mentioning the hypothesis of the same S.A. Gedeonov on the possible identity of the concepts "Rarog" (rerik) and "Rurik". And he did not develop this idea in the context of his research.

Thus, the argumentation of the mentioned researchers comes down to two main points.

Second. The use by Russian princes of totem / clan / heraldic symbols with the image of a falcon.

Let's try to deal with these arguments in more detail.

So, the first point.

Let's start a little from afar.

In connection with the discovery in the second half of the twentieth century birch bark letters in Novgorod, and then in other cities, Russian historical linguistics has managed to make a big step forward.

The fact is that in those ancient years, when, in fact, these birch bark letters were written, there were no spelling rules yet. And people wrote as they spoke, as they heard. Moreover, each sound in the alphabet had its own graphic symbol.

Studying the texts written not only by scientists, "book men", but also by ordinary people for their purely business purposes, we come across a lively direct speech of that period. And, having sets of such texts over several centuries, we can trace how the spoken Russian language has changed over time. And we can also reveal the patterns of these changes and even reconstruct its phonetics.

Linguistics, in general, is a mathematically exact science with its own strict rules.

One of these immutable rules is that when changes occur in a living language and one phoneme is replaced by another, then this happens absolutely in all cases of using these phonemes in a similar position.

In other words, it is impossible that in one language, if we began to speak "Sevodnya" instead of "today", as our ancestors said, we would continue to say "what" instead of "Chevo", as we say now, or "him" instead of "Nevo"... And these very phonetic transitions always occur exactly according to strict rules. And nothing else.

Thus, knowing these rules, you can, I repeat, often with mathematical precision reconstruct the pronunciation of very many words that are now pronounced completely differently. And, in any case, one can almost always say how these phonetic transitions could not have happened exactly.

The example with "Rarog" and "Rerik", in relation to their hypothetical phonetic transition to "Rurik" - this is exactly the case when "they could not."

This is clearly stated by the leading Scandinavist of the Institute of Oriental Studies of the Russian Academy of Sciences, Doctor of History and Candidate of Philology E. Melnikov:

The derivation of the name Rurik from the Pomor-Slavic word "rerig" ("falcon"), as well as the interpretation of the names Sineus and Truvor as the phrases "sine hus" and "tru varing" - "with their own house" and "faithful squad" - are incredible in linguistic considerations.
Details of linguistic studies of this issue, on the basis of which E.A. Melnikova made such a categorical conclusion, I, frankly, did not find. Although I tried to find.

However, given my little experience of acquaintance with works on historical linguistics, it would not help me much - such works, as a rule, are replete with specific terms familiar only to specialists. And it is very difficult for amateurs. To fully understand the logic of the argumentation presented in them, special training is required, which I personally do not have. Therefore, I would still go straight to the conclusions, which, in fact, have already been outlined above.

With regard to the name "Rurik" there is only a detailed phonetic transformation from the Old Scandinavian name "Hrórekr", which means "rich in fame" or "glorious ruler" (the ancestors well and in those days understood that "wealth" and "power" are the same root words), the name is quite common, especially in Jutland.

From the point of view of historical linguistics, this transformation falls, as they say, "in the very color." The phonetic transition "Yo" into "U" and the disappearance of a consonant at the end of a word in a similar position is scientifically fully confirmed.

An example is the word "hook", also borrowed from Old Norse, in which it originally sounded like "Krókr"... Those who want to be convinced of the correctness of the given example can inquire about the etymology of the word "hook" on the corresponding resources.

It is also worth adding that if you look closely at the names that parents gave their children in those days, you can see that in the case of two-part names (such as Rurik, Rogvolod, Truvor, or, if we take Slavic names, Yaroslav, Vladimir, Svyatopolk) children were often endowed with a part of the name of a parent or grandfather.

Then the choice of a name by Prince Igor Rurikovich for his son becomes clear. The name Svyatoslav contains the root "glory", which is a literal translation into the Slavic language of the first part of the name of Father Igor - "Hród" - glory, in fact, the basis of the name "Hrórekr", that is, "Rurik".

Separately (even with some degree of sadness) I would like to note that the supporters of the Slavic origin of the name "Rurik" themselves do not bother to scientifically substantiate the phonetic transition of the words "Rarog", "rarokh", "rerig" or "rerik" into the word "Rurik". But this is one of the key constructions in their hypothesis.

To justify such authoritative researchers as Gedeonov, Rapov and Kuzmin (although they hardly need them), we can say that they carried out their experiments in 1876, 1968 and 1970. Respectively. At that time, applied research in the field of historical linguistics was in fact still in its infancy. Due to the lack of comparative material and appropriate methods for their implementation.

So, we were convinced that at present science has absolutely no grounds, not only to support the thesis about the Slavic origin of the name "Rurik", but does not even have sufficient arguments to at least somehow clearly substantiate it.

All statements of the supporters of the truth of this thesis are based solely on assumptions. And they are not backed up by any serious arguments.

While the supporters of the hypothesis of the Scandinavian origin of the name "Rurik" justify their point of view quite convincingly.

In the next article we will talk about the proper generic signs and symbols of the Rurikovichs and about their evolution in the process of their use by various generations of the princes of the dynasty, and also consider the possibility of their "falcon" origin.