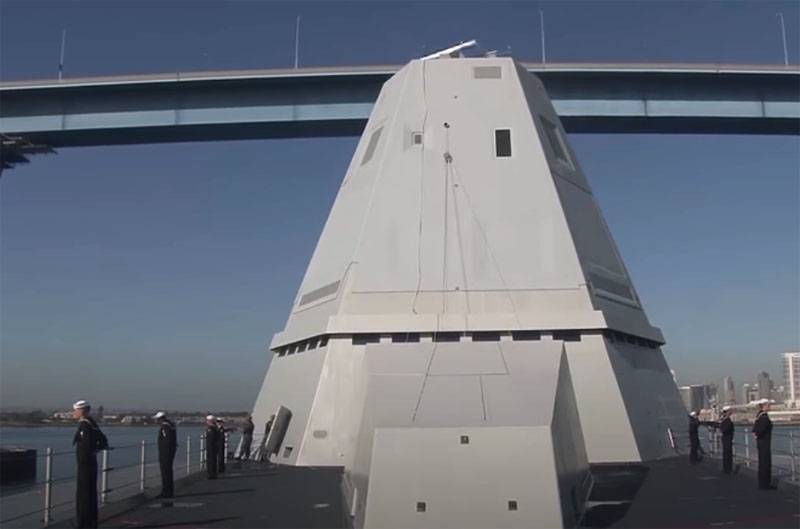 In the United States, questions have raised questions about the nature of the training that was conducted at the end of 2020 by the stealth missile destroyer USS Zumwalt. In the publications of the American media it is reported that the newest warship of the US Navy has worked out firing using the Mk-46 Mod.2 GWS combat module. At the same time, it is specified that firing during the training was carried out from 30-mm artillery mounts Mk44 Bushmaster II "in several directions of attack."


These statements served as another reason for criticism of the program of using the latest destroyer by the US naval forces.

So, it is noted, the ship, the creation program of which costs the United States billions of dollars, and which was originally positioned as one of the main strike assets of the US Navy, capable of destroying coastal infrastructure and large enemy warships from long distances, today is turning into "an expensive artillery boat" ... Much of what was originally planned to be installed on the ship (including from radar equipment and weapons) was either not installed, or was completely removed after the initial installation.

The skepticism is connected with the fact that the trainings of the stealth destroyer Zamvolt are carried out without the use of its powerful missile weapons, but with the use of only the aforementioned 30-mm ship-based cannons.

In this regard, the United States notes that it is highly likely that the forecasts for the transformation of Zumwalt-class ships from missile strike destroyers of the far ocean zone into landing support ships will come true. Earlier, the command of the US Navy made statements that due to "the complexity with some weapons of the Zamvolt, it may be reoriented to support operations for the operations of the Marine Corps."

It should be recalled that it was originally planned to order 32 ships of this class for the US Navy. Then, when problems began to appear one after another (including with infinitely inflated costs), the Pentagon decided to moderate its appetites. So far, they agree on the version that 3-4 Zamvolts will be enough.

But until now, the American command does not have a unified position on the nature of the applicability of these super-expensive destroyers. Training with firing from 30-mm cannons allowed skeptics to reactivate, who not only called the Zamvolt an “expensive artillery boat,” but also considered that the Pentagon has recently begun to frequently experience problems with planning and controlling expenditures on ambitious military technical projects.
Ctrl Enter
Noticed oshЫbku Highlight text and press. Ctrl + Enter
We are
Reports from the militia of New Russia for 27-28 September 2014 of the yearYuri Drozdov: Russia prepared the role of the sacrificial calf
Military Reviewin Yandex News
Military Reviewin Google News
150 comments
Information
Dear reader, to leave comments on the publication, you must sign in.