The concept of a shipborne unmanned aircraft AWACS 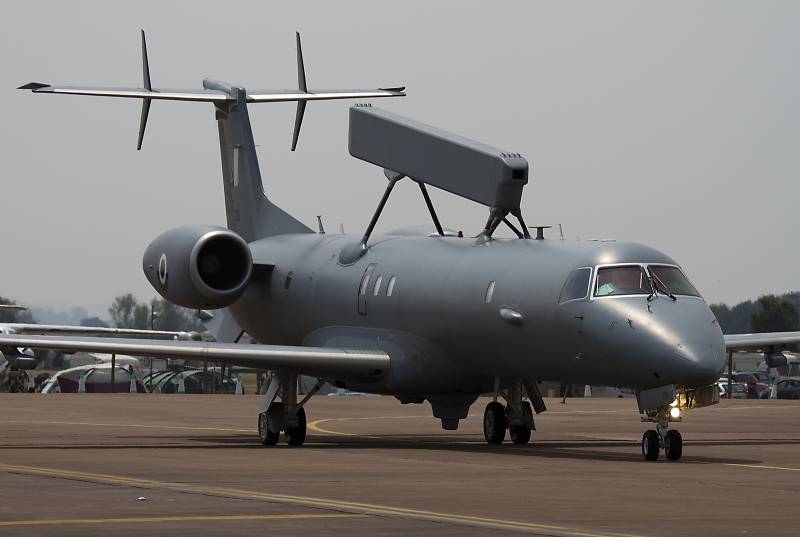 В previous article Figure 1 shows a diagram and outlines the concept of a combined-arms AWACS aircraft designed to replace the A-100 aircraft. The principles of construction presented there are also used for shipborne AWACS. First, an increase in the flight altitude of the AWACS up to 16–18 km makes it possible to limit the scanning area of ​​its radar to only the lower hemisphere. Secondly, the installation of the wing on the roof of the fuselage makes it possible to place an active phased antenna array (AFAR) of the maximum available area on its freed side surface.


For an aircraft-carrying cruiser (AK or UDC), it is desirable to have your own small-sized AWACS UAV. Unlike combined arms, a shipborne AWACS should (in addition to detecting air targets) support strikes against attacking air, ground and sea targets up to missile guidance. If for a combined-arms AWACS it was most important to measure the azimuth of the target, and fighter-bombers (IS) could measure the target's altitude, then the ship AWACS guiding missiles should also accurately measure the elevation angle. Therefore, the AFAR, which (as in Fig. 1) has a length 6 times the height, is not suitable for a shipborne AWACS.

Article "The concept of an aircraft carrier ..." the requirements were substantiated: the mass of an AWACS UAV should not exceed 5–6 tons, and a wing span of 18–20 m.

Shipborne AWACS should not be performed as a copy of the scheme Fig. 1, made on a scale of 1: 2. Since the height of the lateral AFAR should be increased.

1. The design of the UAV AWACS

Proposed in Fig. 2 the UAV drawing needs to be edited by an aerodynamicist. The figure reflects only the general layout of the UAV wings and indicates the limitations of the radar antenna scanning areas caused by the wings. 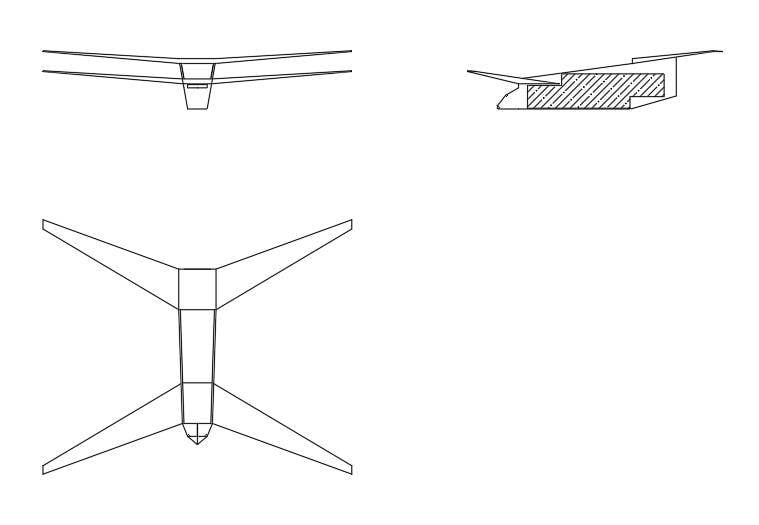 Fig. 2
The aircraft is built on a two-wing tandem design.

The front wing has a reverse sweep, similar to the wing of the IB Su-37. The tail unit is made with two keels, on which the rear wing is located, which also plays the role of a stabilizer. The keels and side surfaces of the fuselage form a single plane, with the keels extended forward to the beginning of the front wing.

The increase in the height of the lateral AFAR is also achieved due to the fact that the air intake is extended and stretched under the front wing.

The chassis of this UAV is built similarly to the UAV (Fig. 1) for a bicycle type. Accordingly, small metal wheels are installed on the tips of the front wing, and the outer sections of the wing with a length of 3,5 m can go down without touching the runway slightly. Lowering is performed when the UAV is already rolling down the runway.

The side AFAR is divided into 3 parts. The central rectangle (measuring 4,2x2 m) is located between the wings and contains transmit-receive modules (PPM). The absence of a wing above this part of the AFAR allows it to scan both the upper and lower hemispheres, which is necessary to detect missiles flying up from above.

The extreme parts of the lateral AFAR (2,1x1,33 m in size) consist of purely receiving modules. They are used to increase the received signal power and improve the accuracy of measuring the azimuth of targets located in the lower hemisphere.

2. Characteristics of radar options for UAVs

The requirement to increase the accuracy of the measurement of the elevation angle forces to reduce the wavelength of the radar. Either 10cm or 5,5cm range can be selected.

If 10 cm is chosen, then it is necessary to take into account that the greatest danger to the UAV is the Aegis multifunctional (MF) radar of the Aegis air defense missile system, which operates with λ = 9-10 cm.Therefore, in order to be able to suppress this radar, we will choose this very range for AWACS.

In what follows, we will denote it, as is customary in radar, in a simplified way - λ = 10 cm.

The nasal AFAR operates in the same range of 9–10 cm and has a total area of ​​about 1 sq. M. Liquid exact area value will be determined after nose cone design. Liquid cooling allows increasing the PPM power up to 50 W. With a total number of PPMs of 360–400, the power consumption will be 14 kW. AFAR weight 80 kg.

To increase the accuracy of measuring the azimuth of the target in the leading edge of the front wing, three additional purely receiving AFARs are installed, having the form of three docked rulers - the left side of the wing, central, right. Their total length is 11 m, the number of receiving modules is 232.

Target detection ranges in the direction of the lateral AFAR axes will be:

At the boundaries of the azimuth scan zone equal to ± 60 °, the detection range decreases by 20%.

The detection range in the upper hemisphere by IS is 480 km, by high-altitude anti-ship missiles with image intensifier tubes 0,3 sq. m - 240 km.

The detection range in the lower hemisphere at an azimuth of 45 ° forward is 400 km, along the anti-ship missile system - 145 km.

The error of a single measurement of angles at a distance equal to 80% of the detection range in the lower hemisphere:

When tracking a target for 3 sec. the angular error decreases by 2–3 times, and when the range is reduced to 50% of the detection range, it decreases by 2 times.

In the upper hemisphere:

The prime cost of the serial sample of the radar depends on the price of the PPM. To reduce the price, the volume of the MRP order must be large, for example, 100 thousand pieces. Presumably, the cost of the radar will remain at $ 14 million.

The advantage of this AWACS option is that, despite its low weight and cost, it provides high detection range and target tracking accuracy.

- The complexity of integrating the UAV radar and the radar complex (RLK) AK or UDC. The proposed AK radar contains 2 radars of the 5,5 cm and 70 cm ranges and a state recognition module of the 20 cm range.Therefore, for communication with the UAV radar, you will have to make a special module of the 10 cm range.

- Difficulties arising in the joint work of UAV AWACS and UAVs of information security, based on AK, in which the radar operates in the range of 5,5 cm.

That is, the AWACS radar will not be able to highlight targets. In order for the IS radar to work in stealth mode or to use the illumination of the AWACS radar to increase the target detection range using the radar.

Another drawback is the low accuracy of determining the height of targets. For example, the error in measuring the altitude of an anti-ship missile located at a distance of 150 km will be (with tracking) 0,5 km. Such an error will not allow to display the PR using the command method for homing.

Further reduction of the radar wavelength will avoid these disadvantages.

In this version, there are limitations on the possibilities of reducing λ.

In a conventional AFAR, PPMs are set with a step equal to half λ. Therefore, when λ is halved, the number of PPMs installed per unit area quadruples.

An additional advantage of the 5,5 cm range is the ability to suppress the Patriot air defense system radar.

The disadvantage is the reduction in the area of ​​the lateral AFAR, which reduces the detection range by 15% when detecting IS. The detection range of low-altitude anti-ship missiles does not fall due to the use of a vertically narrower beam.

3. Use of AWACS to detect land and sea targets

AWACS cannot (due to reflections from the earth's surface) detect ground stationary targets in a real beam mode. In practice, it is possible to detect either moving targets or stationary ones in the mode of the synthesized beam, that is, in the lateral directions.

In this case, only the radial component of the target's velocity vector matters, that is, directed along the line connecting the radar and the target. The minimum detectable target speeds depend on the target azimuth - the closer the target is to the direction of flight of the IS, the lower target speed can be detected.

Targets lying in a direction perpendicular to the direction of flight are detected worst of all. But AWACS does not attack the target, but patrols along the combat area. In other words, his goals are usually on the side. Then only a narrow beam allows detection of low-speed targets. Lateral AFAR with a 0,7 ° beam width will allow detecting targets moving at a radial speed of more than 5-6 km / h.

Conversely, in the synthetic beam mode, targets located on the side are best detected. It is possible to get a mark from a target such as a stationary tank at ranges of 100-200 km, but it is possible to recognize a mark as an object of armored vehicles at ranges of about 20-30 km.

Marine targets are detected much easier than ground targets due to the fact that the level of reflections from the sea with moderate waves of 2-3 points is an order of magnitude lower than from the ground. Especially the level of interference is reduced at low altitudes of the AWACS flight. If the glide angle of the radar beam turns out to be less than 1 °, then the level of reflections will decrease by another 1-2 orders of magnitude. Therefore, even a small target can be detected. For example, a small boat with an image intensifier of 10 sq. m - at a distance of 200 km, choosing the desired flight altitude.

The proposed AWACS UAV, despite the low weight of 6 tons, surpasses the Hawkeye AWACS aircraft in its technical characteristics and is not much inferior to the A-100 AWACS.

Low prime cost ($ 30–40 million) and low fuel consumption will ensure its high competitiveness even in the land-based AWACS market.

AWACS is capable of providing over-the-horizon guidance of missiles.

When placed on the AK, the AWACS ensures the coordination of the actions of the UAV IS and can even direct the gliding ammunition launched from them.

Ctrl Enter
Noticed oshЫbku Highlight text and press. Ctrl + Enter
We are
The construction of universal landing ships for the Russian NavyMilitary reform as an integral part of the security concept of the Russian Federation: Systematic dynamic assessment
Military Reviewin Yandex News
Military Reviewin Google News
78 comments
Information
Dear reader, to leave comments on the publication, you must sign in.