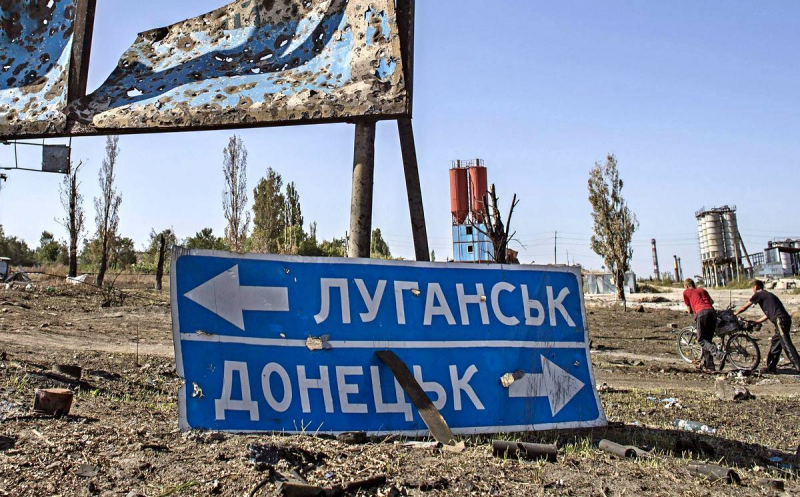 It's time for Donetsk and Lugansk to speed up the process of parting with Ukraine. It doesn't hurt to talk about the Minsk agreements.

Still - not to interfere. If nothing but conversations actually happens. Unless, of course, we do not count several exchanges of prisoners of war, a sluggish imitation of the withdrawal of troops and attempts to open new checkpoints, which clearly came at the wrong time. All these evolutions (and talk about them) can be continued for another seven years.

At the same time, the most significant points of the Minsk agreements - peace on the front line, broad autonomy for Donbass and Ukraine's fulfillment of social obligations - are being fulfilled only conditionally. At the front, they are shooting again, and with the use of mortars.

All autonomy fit into the senseless and incapacitated "Law on Special Status", and social obligations were limited to pensions for those who were verified on time.

The further course towards integration with Russia, the rejection of the Ukrainian language, the formation of an ideological apparatus and many other achievements do not contradict Minsk at all. And it was necessary to deal with all these matters back in 2014–2015.

Instead, as usual, they played with spillikins and created Potemkin villages - they walked in formation with patriotic songs on their lips, waved flags, built "socialism", etc. As a result, practically nothing was achieved neither in the economy, nor in the social sphere, nor in culture.

Worse, they were unable to create a coherent and ergonomic explanation of where and why the republics are going. An explanation available to every student and proletarian, and not fostered in classrooms specifically for other classrooms.

Now, it seems, they woke up. At least, they announced the creation of the doctrine of the Russian Donbass. What will come of this is not yet clear (optimism, alas, has long been exhausted). But at least we got under way. And that's already good.

Of course, it is not only the ideology that will be talked about on TV screens that is important and then safely forgotten, having released, for the sake of order, a couple of monographs and textbooks (and sawing a hefty jackpot for this program). It is important to remind people that they began to forget - why did they fight at all? About the values ​​of 2014 - the Russian language, adherence to Orthodoxy, the unacceptability of Western cultural Marxism, the values ​​of the traditional family, etc. Because in the trenches they died not for a well-fed life, but for something much more important.

Today, unfortunately, a completely different paradigm is heard - as if the Donbass had rebelled for a full belly and the shit of some particularly prosperous life. Well, there were those who fought for the belly. But they were in the minority.

People began to forget that everything that happens in the LPNR is the deliberate choice of the majority, who voted in the referendum “for” their way of life and “against” Ukraine.

They began to forget that even if the Minsk Agreements were ever fulfilled, Donbass would become part of Ukraine only formally - administratively and, partially, economically. But the return to Ukraine of the times of 2013 and, especially, close integration with today's Ukraine is nonsense.

And for those who want to live with Kiev in the same space-time, it is better to immediately pack their bags and move towards the demarcation line. Moreover, it is best to cross it once and for all.

With this vicious practice, when people live in Ukraine, and go to the republics only for their own selfish affairs, it is high time to end. You cannot serve two gods - either Euro-integration, BLM, Russophobia and LGBT, or the Russian world.

You will not be full of doctrine

At the same time, it is clear that internal contradictions cannot be resolved by ideology alone - it is also necessary to normalize the economic situation and raise the standard of living. And here the LDNR are faced with conceptual problems. Moreover, as in Crimea, first of all, due to the incompetence and inability for normal work (within the legal framework) of local officials.

On the one hand, today it is extremely difficult to find a more or less sane manager in order to head a structural unit, not to mention a ministry or city government. On the other hand, you can't spare fools and thieves on this matter? Moreover, when corruption and incompetence are prevalent, a normal person will not go to work in such a terrarium - they will still be eaten.

Unfortunately, to integrate into Russian reality, when the law somehow works, the government sometimes hears civil society, and the man in the street occasionally manages to punish the mighty of this world - not only officials, but also the population are not ready.

Everything that happens is more like an unshakable Ukrainian quagmire than developing republics. There is a problem with the payment of salaries to miners - they are paid with a delay of two or three, and sometimes even four months. It would seem that the relevant minister should already dry the crackers, the government should admonish the ferocious miners, and the mine administration in panic should fight off the prosecutors ...

But no. Miners calmly go to work. Only a few have contacted the prosecutor's office. And those, having received formal replies, immediately waved their hand and calmed down. The officials sit quietly in their places, and in the most important offices of the republics they simply pretend that nothing is happening.

And all because they got used to the situation since Ukrainian times. As a result, looking at this absurdity, you understand that ideology in the LPNR, no doubt, is needed. But maybe it would be worth starting with repression?

The Donbass (and Crimea) will take a long time to get rid of the Ukrainian heritage. And, unfortunately, local elites and ordinary people will not be able to master this process on their own - the inertia is too great. Especially in a situation where people freely travel to Ukraine and back. And in Donetsk and Lugansk Ukrainian propagandists openly roam.

There is no way to do without Russia - otherwise the "elites" will continue to fight for power, spending resources either on an internal struggle or on their own enrichment. And the townsfolk, who served in 2014 somewhere in Zhitomir or in the Crimea, will go to Mariupol for cheap household chemicals.

It will take a long time to drive out pernicious Ukrainian remnants and format - and estates, and public consciousness, and civil society and much, much more.


Photo sent by a reader from Lugansk.

Heavy Ukrainian heritage: in the very center of the city, in the underpass for 15 years already, in dozens of places, the roof is leaking. Neither the population, nor the administration of the transition, nor the leadership of the city or republic, this disgrace, in the most crowded place of Lugansk, does not care.

Probably everyone is waiting for the "hand of Moscow" to reach out and fix everything?

And you say - doctrine!