The giant petty bourgeois wave and its consequences 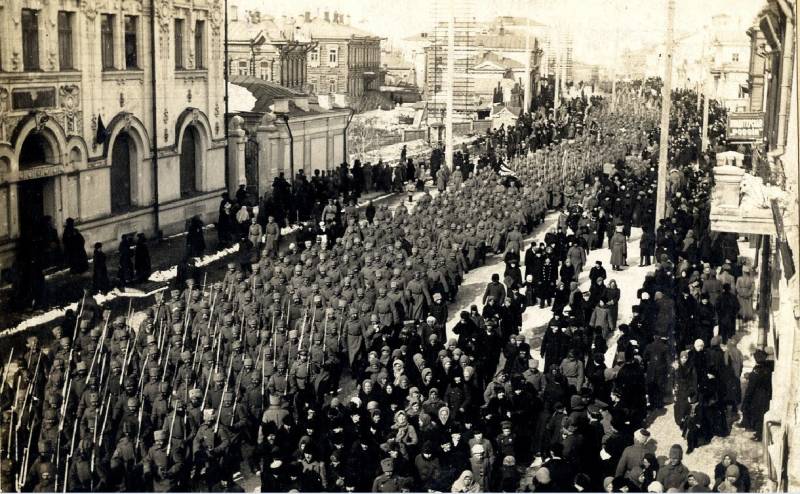 Here it is - that "gigantic petty-bourgeois wave" about which Lenin will write in April-May 1917. In gray overcoats and with rifles in hand.

One can
be
torn apart by bombs
can
die
for the land for their own,
but how
die
for the general?
Mayakovsky V.V. Good!
The beginning and end of the peasant civilization. Today before you, dear readers of VO, is the fourth article of our "peasant cycle".

It's nice that many are interested in this topic. And some of the comments began to be distinguished by a special depth. Moreover, their authors cited facts that significantly supplemented the third article. First of all, this refers to two comments by Deniska999, and bober1982 (vladimir), who turned to interesting sources for this.

I was also very pleased that some followed my advice and started reading the books recommended in the article. And they wrote in the comments that they liked such and such a book.

There were also questions and suggestions. In particular, please tell us more about the essence of the Stolypin agrarian reform. However, a story about her would lead our cycle to one side, so I will refrain from it for now.

But today we are again expected to turn to Lenin's printed heritage and a completely rare edition, once removed from all libraries of the Soviet Union. But relevance, as a source, has not lost it at all. 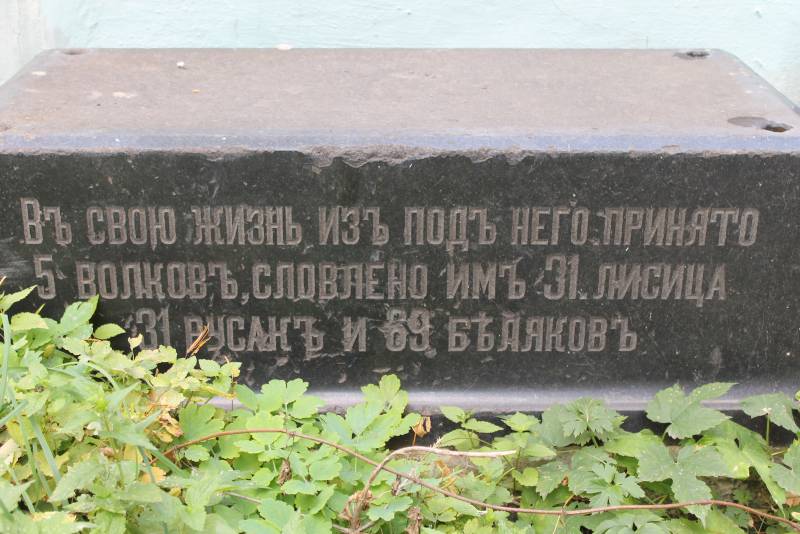 The illustrative row for today's material is supposed to be quite variegated: there will be photographs from the author's archive, and photos of the era of the revolution in subsequent years, and frames from a popular movie at one time. And just the first pictures will be on the theme of how "merrily" the landowners lived with us. Take at least the same famous poet-hunter Nekrasov, who put his beloved dog at the dinner table. And some of them buried their dead pets even under such stone monuments.
Exposition of the Penza Regional Museum of Local Lore. 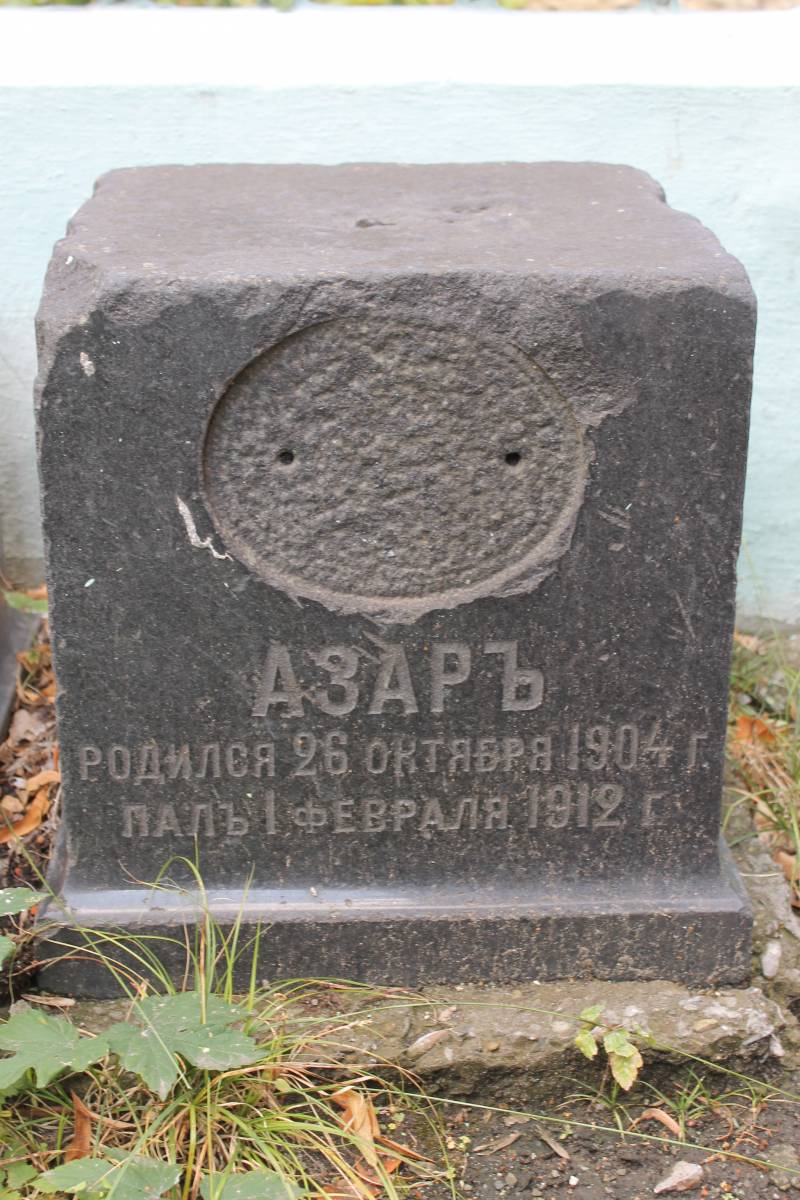 And here is another such stone, which, however, has lost its bronze bas-relief.
That is, the landowners lived well on the whole.
So, we will skip the Stolypin agrarian reform, and the revolution of 1905-1907, and the subsequent economic growth that took place in the Russian Empire.

And let's go straight to the spring of 1917, when the consequences of the First World War hit peasant Russia especially hard. Here everything merged into one stream: fatigue from the war, and its hardships, and the beginning of devastation in the countryside, and the anti-war agitation of the left parties. The result is important.

And the ending was like this - the autocracy in Russia was overthrown. But the new government was in no hurry to decide either the question of peace or the question of land. And that was his trouble. 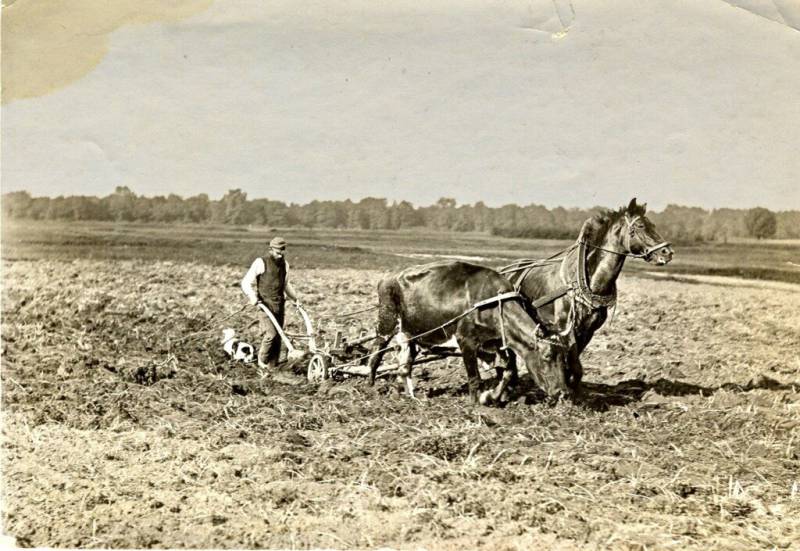 "Why are there three horses on the farm?" One of the readers asked me. But for what: you plow on two, and the third (or even two) rests (or is still busy at some kind of work).
Photo 1907 of the year.
However, what is important for us, first of all, are the social consequences of everything that took place after the overthrow of the autocracy. And here again no one better than V. I. Lenin understood the situation in Russia and did not describe it.

And he wrote literally the following:

“Russia is in full swing now. Millions and tens of millions, politically sleeping for ten years, politically hammered by the terrible oppression of tsarism and hard labor for the landlords and manufacturers, woke up and reached for politics. And who are these millions and tens of millions? Mostly petty proprietors, petty bourgeois, people standing in the middle between capitalists and wage workers. Russia is the most petty-bourgeois country of all European countries.

Giant petty bourgeois wave overwhelmed everything, suppressed the class-conscious proletariat not only by its numbers, but also ideologically, that is, it infected and captured very wide circles of workers with petty-bourgeois views on politics.

In the interests of improving the technique of grain production and the size of production, as well as in the interests of developing rational large-scale farming and social control over it, we must, within the peasant committees, seek the formation of a large exemplary farm from each confiscated landlord's estate under the control of Soviets of Agricultural Laborers. The party of the proletariat must explain that the system of small-scale farming with commodity production is not able to save mankind from the poverty of the masses and their oppression. "

THE TASKS OF THE PROLETARIAT IN OUR REVOLUTION
(DRAFT PLATFORM OF THE PROLETAR PARTY)
Written on April 10 (23), 1917; afterword - May 28 (June 10) 1917
Published in September 1917 in Petrograd as a separate brochure by the Priboy publishing house.

Signature: V. Lenin
That is, in modern terms, although perhaps somewhat roughly:

"The village flooded into the cities."

Someone was shaved into the soldiers, someone hastened to buy armor at a military plant, someone speculated in bread and vodka (why not, since there is demand ?!). The main thing is that huge masses of peasants, infected with petty-bourgeois outlooks on life, with a patriarchal psychology, suddenly felt that they, too, were people, that

"A man with a gun is strength," and since he is strength, then if you please give him what he "demanded!" 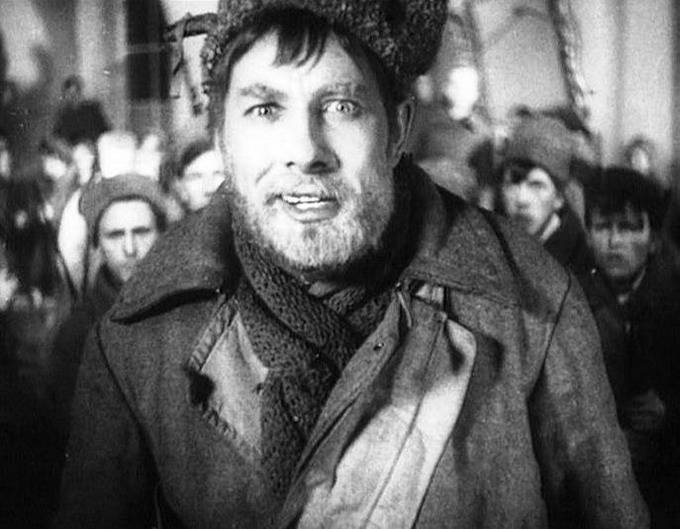 There he is - a man with a gun. " A still from the movie of the same name. And here's how to refuse this? Especially if there are a lot of them and they will all be with guns? 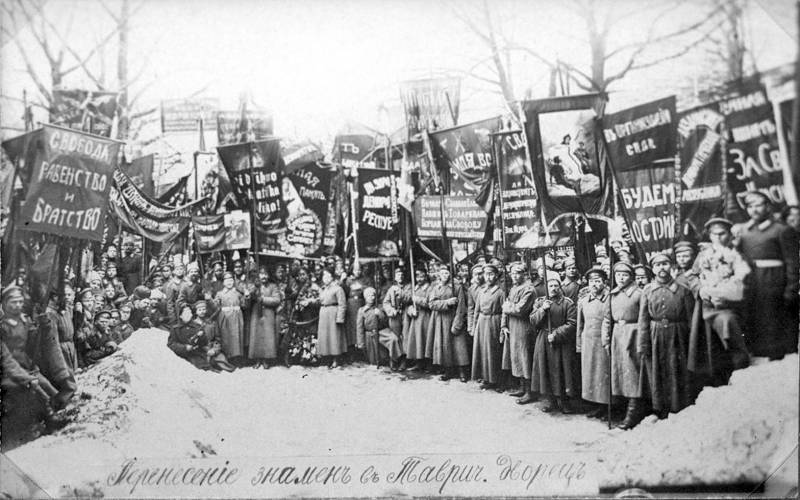 And there were a lot of them. Look how many banners have been dragged to the Tauride Palace. And you read what they wrote on them, it is so clear absolutely that in their heads they have one porridge.
And in order to satisfy the demands of all these masses, after the October coup, Lenin decided to abandon the Bolshevik program of creating large model farms on the basis of landowners. And, as the peasants and Socialist-Revolutionaries demanded - to give and divide all the land of the landowners!

The "man with a gun" was very happy about such a decision.

"There will be land - everything will be",
He thought. Although I did not understand what the catch is, and what is more, a big one.

The fact is that the same kulaks did not need landlord lands, in general. Moreover, the purchase and sale of land (as well as its processing by hired labor) were prohibited. They already lived well, robbing fellow villagers, keeping their debts in their fists.

The poor people needed the surplus land like a dead poultice. They could not cultivate their own land either. There was no tax.

The middle peasants remained. For them Lenin's decree was like manna from heaven. All they lacked was land. And so they got it.

But, having received land, they immediately ceased to need any kind of power. Their household was practically natural.

Well, we need needles, kerosene. It would be nice to have a "tittieshnek" woman. I saw how these were sold on the market - that's fun. And so - we have our own!
And it was this virtually feudal independence of the middle peasant that added fuel to the fire of the Civil War. And this is precisely where Lenin's calls come from: 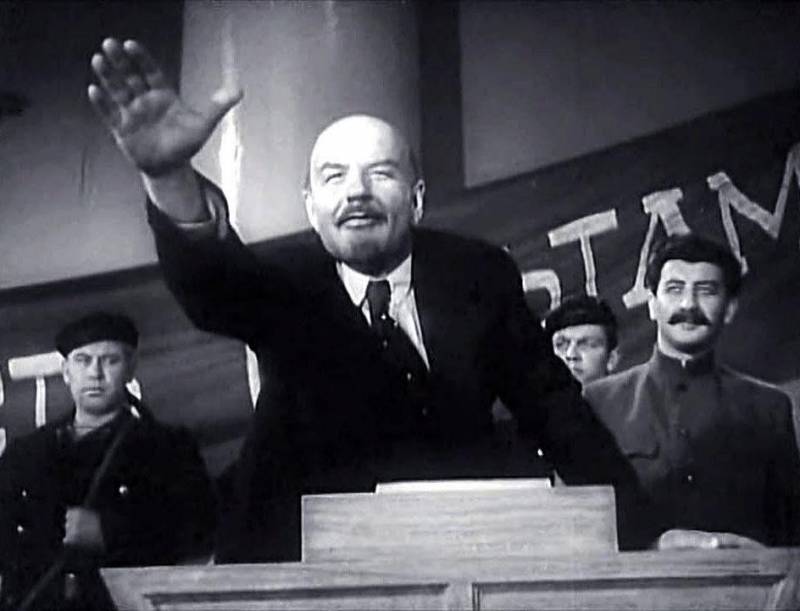 Do you want land ?! Here's the land!
The village idiot could easily be set against the kulaks and thus for a while to appease her discontent. But with the middle peasants it was impossible. Since now the kulaks are gone, it was they who became the main producers of marketable grain, feeding both the army and the city. And their interests very much even had to be reckoned with. For example, to turn a blind eye to the activities of the ARA, because the same famine had a heavy impact not only on the poor loyal to the party, but also on the middle peasants, bread producers.

Yes, but who to reckon with? With carriers of a backward petty-bourgeois psychology, brought up in patriarchal traditions, with a bunch of prejudices, stubborn and stubborn? Yes, fullness. They had to be dealt with decisively once and for all, so as not to depend on them in any way.

Yes, only for a long time this could not be done. On the contrary, it was in the interests of this mass that the NEP was introduced in the country, the cultivation of the land by hired labor (that is, farming) was allowed, since the Bolsheviks very well understood that it was simply impossible to jump into socialism in a peasant country like that right away.

And here in the country one after another congresses are held, setting the vector for its development. In 1925, the XIV Congress of the CPSU (b) - the congress of industrialization. In 1927, the XNUMXth congress was a congress of collectivization, at which a decision was made on the need to change the course of development of agriculture.

The essence of the discussion was the unification of the peasants into one whole and the creation of collective farms in order to increase the production of marketable grain. Because at that time, apart from timber and bread, we simply had nothing to sell abroad. And, accordingly, there was nothing to buy machines and equipment to make Tanks and planes in case of a world revolution or an attack by the invaders, which was not ruled out in any way.

There was one more very important ideological reason. The fact is that one of the fundamental contradictions of Bolshevism of this time was the indisputable fact that the party (which called itself workers, and its rule - the dictatorship of the proletariat) actually came to power in an agrarian country where factory workers made up only a few percent of the population. Moreover, most of them were yesterday's immigrants from the village, who had not yet completely severed ties with it.

After all, Lenin's "gigantic wave" did not go anywhere afterwards. It did not dissolve. Forced industrialization was supposed to eliminate this contradiction. 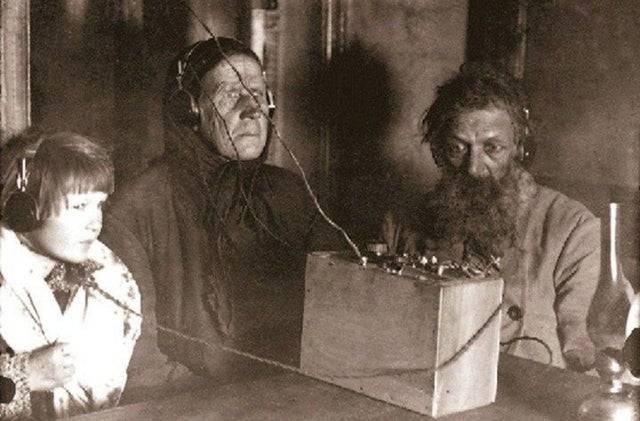 1928 year. The peasants are listening to the radio.
But then quite unusual difficulties began.

Grain was required now. And you could take it only on the tax in kind, which the peasants in the USSR were allowed to pay by choice: either grain or industrial crops.

And then there was the grain harvest failure of 1926-1927. With a good harvest of industrial crops. So the peasants paid off the tax in kind with them.

The grain harvest of 1927-1928 was good. But, frightened by the poor harvest last year, the peasants held back the grain. And again they paid off with technical crops. 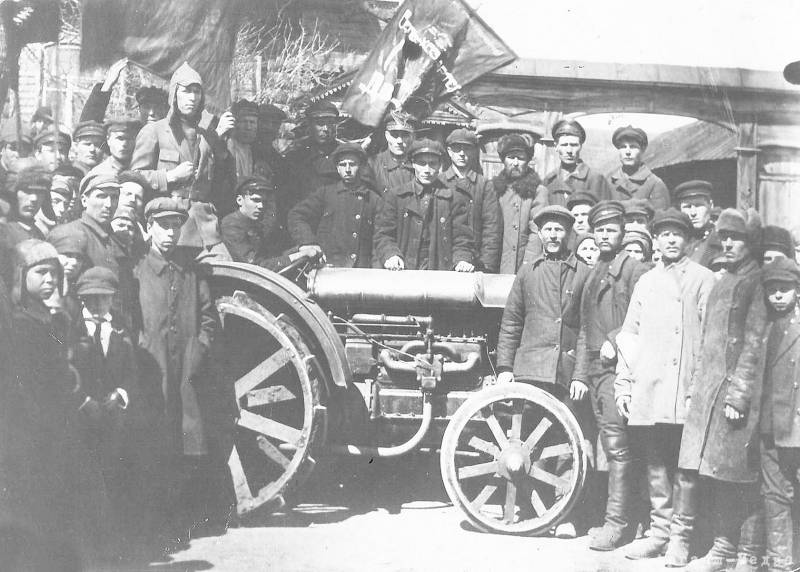 Collective farm named after Bekerev. The founders of the first collective farm in Tatarstan.
And industrialization has already begun.

Amtorg in the USA worked tirelessly. Grain was required like air.

The situation became so acute that on January 15, 1928, Stalin personally went to Siberia. And what did the peasants say to him there?

It is clear that Stalin (like no one else in his place) would not have tolerated this petty-bourgeois freedom any longer.

That is why on December 27, 1929, at a conference of agrarian Marxists, Stalin made a report "On the issues of agrarian policy in the USSR" (by the way, very interesting and containing many references to the works of VI Lenin).

There he announced the need for a forced transition to the creation of collective farms.

That is, the time for this, apparently, has come.

1. Activities of Russian and foreign organizations to eliminate the famine of 1921-22: based on materials from the Lower Volga region. Knurova, Valentina Alexandrovna. Candidate historical sciences. Astrakhan. VAK specialty code: 07.00.02

2. Speech by I.V. Stalin at the conference of agrarian Marxists "On the issues of agrarian policy in the USSR", December 27, 1929 https://istmat.info/node/20180