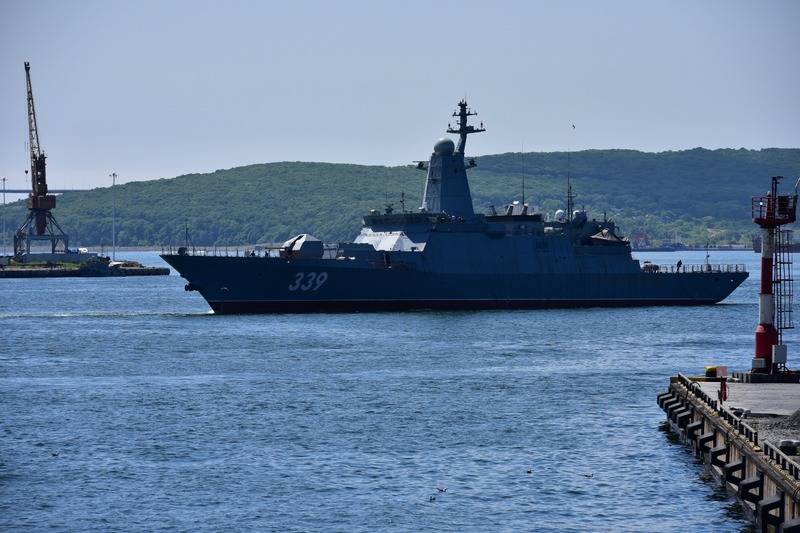 The Pacific Fleet is preparing to accept a new corvette and minesweeper. The ceremony of raising the Andreevsky flag on the ships will be held on December 25 and 26.


According to the Ministry of Defense, on Friday, Vladivostok will host the admission ceremony for the newest corvette Hero of the Russian Federation Aldar Tsydenzhapov of project 20380 into the Pacific Fleet. The ship has completed state tests and is currently at the acceptance base of the Amur Shipyard, where it is preparing for the ceremony.

The project 20380 corvette "Hero of the Russian Federation Aldar Tsydenzhapov" was laid down in Komsomolsk-on-Amur on July 22, 2015, on September 12, 2019, brought out of the boathouse into the outfitting and transport-launching floating dock, on October 21, 2019, physically launched from the dock. On May 25, 2020, it entered the Zeya transport floating dock for transportation to Vladivostok, where it was delivered in mid-June. The ship entered the factory running and state tests at the end of September.

The second ship to join the Pacific Fleet will be the Project 12700 Alexandrite minesweeper (mine-defense ship - PMO) Yakov Balyaev. The ceremony of raising the Andreevsky flag will also take place in Vladivostok, but, according to the Ministry of Defense, on Saturday, December 26. The minesweeper completed the state tests on December 23, 2020.

"Yakov Balyaev" is the fourth serial (fifth in a row) ship, which was laid down on the stocks of the Sredne-Nevsky shipyard. Bookmarking took place on December 26, 2017, launching on January 29, 2020. Delivered by the Northern Sea Route to Vladivostok on October 22 this year. Mooring tests took place at the outfitting base of the Amur shipyard in the Golden Horn Bay. On November 13, for the first time, he independently went to the Sea of ​​Japan to undergo combined factory running and state tests.

Another ship that will become part of the Pacific Fleet before the end of this year is the Project 20385 corvette Gremyashchiy. It is currently at the Severnaya Verf shipyard, where it is being prepared for transfer. Unlike "Aldar Tsydenzhapov" and "Yakov Balyaev", who have already arrived at the Pacific Fleet, the "Thundering" will become part of the Navy in the Baltic.