Why did the White Army lose to the Red Army? 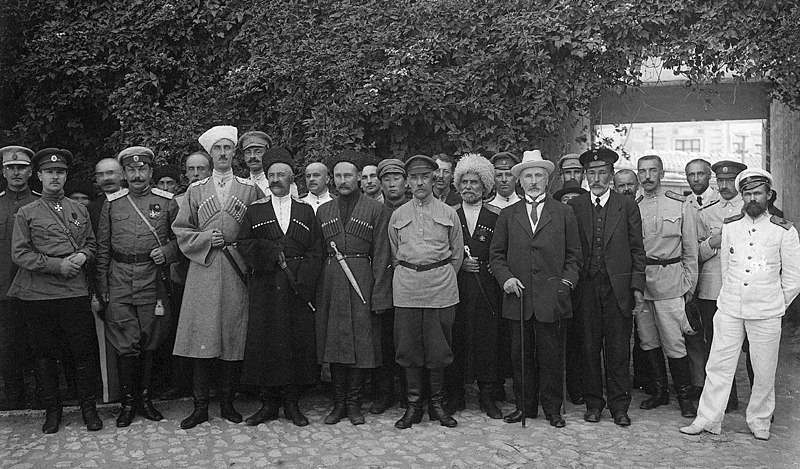 Commander-in-Chief of the Russian Army, General P. Wrangel, military chieftains, members of the government of the South of Russia and military Cossack governments. Sevastopol. July 22, 1920

Who overthrew the king and destroyed the empire

After the collapse of the USSR, a myth was created that the tsarist regime and autocracy were destroyed by the "commissars", the Bolsheviks. Like, it is the communists who are to blame for the death of "old Russia". However, this is clear deception and distortion. stories.

Tsar Nicholas II was overthrown in February-March 1917, not by them, but by the predecessors of the current liberals, the bourgeois democrats. Not an ordinary people (peasants and workers) who were busy with survival, not commissars and Red Guards forced Nicholas II to abdicate, but generals and ministers, grand dukes and deputies. The upper estates and classes, educated and well-to-do people.

The Bolsheviks at this time were underground. It was a marginal, extremely small party, in fact, already defeated by the police. Its leaders and activists were either on the run abroad, or in exile and hard labor. The Bolshevik Party had practically no influence whatsoever among the people and society.

Nicholas II was opposed by the elite of the Russian Empire - the grand dukes and aristocrats, generals and church hierarchs, industrialists and bankers, politicians and public figures, commercial capital and the liberal intelligentsia.

Many revolutionaries-Februaryists went to the Freemasons at the same time. Masonic lodges were closed clubs where the interests of various elite clans were aligned.

Why did the elite oppose their monarch?

The answer is the Westernization of Russia. Autocracy remained a relic of the past times of Ivan the Terrible. The elite in Russia had capital and power, but did not have power. The Februaryists strove to complete the westernization of Russia, to make it a part of Western Europe. To turn Russia into "sweet" Holland, France or England.

Russian "Europeans" liked to live in "enlightened" Europe. They wished to establish the same order in our country: parliamentary democracy, power with the bourgeoisie, the market, freedom of speech and religion.

Nothing special. After the collapse of the USSR, many people in the post-Soviet republics wanted the same (and still do).

They did not understand that, say, for example, the Baltic States or Ukraine cannot be part of the Western metropolis, the core of the capitalist system. Only the colonial periphery of the capsystem, from where they will take the necessary resources (if any), pump out labor, sell junk goods and dump accumulated contradictions.

What will cause the robbery of people's property (privatization), de-industrialization, the destruction of all the achievements of socialism (science, culture, education, medicine, human protection, etc.), the establishment of a comprador-oligarchic regime and the rapid extinction of the people. That the overwhelming majority of ordinary people under such a system will become

Thus, the bourgeoisie and Westernizers believed that if tsarism was destroyed,

"Prison of peoples"
democratize the army, then happiness will come. It will be as good in Russia as in dear Europe.

It is worth recalling that in the XNUMXth century, Russian aristocrats, merchants and industrialists preferred to speak German, French or English. And to live - in Berlin, Vienna, Geneva, Paris or Rome.

Europe was a model and example for them

Therefore, the Februaryists overthrew Nicholas II in February 1917, although only about six months remained until the victory over the German Empire. The Second Reich was already exhausted by the war, Berlin wanted to negotiate on more or less favorable terms.

Westerners wanted to establish a Western-style regime in Russia, a constitutional monarchy or a republic. Become triumphant in the war with Germany.

"The West will help."
Of course, England, France and the United States helped to overthrow the tsarist regime. But they did it not out of a desire to turn Russia into a part

They had their own interest.

Solve their problems (the crisis of capitalism) at the expense of not only Germany, Austria and Turkey, but also Russia. Not to share with the Russian the fruits of victory, but to destroy, dismember and plunder the Russian Empire.

To solve the millennial strategic task - to destroy the Russian world, the Russian people, which prevents the West from establishing its own order on the planet.

The Russian Februaryist revolutionaries were simply used. Later it was a terrible shock for them when the West did not help them.

As a result, instead of a triumphant victory, the Februaryists caused a terrible civilizational and state catastrophe in Russia.

The overthrow of the tsar, the destruction of the empire and all its main institutions, including the army, led to the Russian Troubles. All the contradictions and problems that have been accumulating for centuries have burst out.

Liberal democratic forces, supporters of the "market" (capitalism) found themselves at a broken trough. Even the power could not be kept.

The street was constantly radicalized. More radical revolutionaries - Socialist-Revolutionaries, anarchists, nationalists and Bolsheviks - broke into the leaders. The Bolsheviks in October literally raised power in the capital and in most of the country.

However, their opponents were not going to give up. Gene burst out of the bottle.

The village gave birth to its own project - the people's freemen (People against power). The peasants generally renounced any power. The confrontation between town and village began. They managed to pacify the village with a lot of blood.

National separatists and Basmachis (predecessors of the jihadists) had their own programs. Thus, the Poles demanded the restoration of the Polish-Lithuanian Commonwealth "from sea to sea" (from the Baltic to the Black Sea). The Finns laid claim to Karelia, the Kola Peninsula, part of Ingermanlandia (Petersburg province), Arkhangelsk and Vologda provinces. Ukrainian nationalists (Petliurists) claimed lands that had never been part of "Ukraine" - Crimea, Donbass, lands of Novorossiya, etc. The Cossack regions also supported the secession.

Interestingly, the countryside and the nationalists were even more of a threat to the Bolsheviks than the White Guards. In particular, the nationalists and the interventionists helping them during the Troubles fielded up to 2-3 million fighters. And in all together the white armies at the same time never had more than 300 thousand people.

But she was able to defeat the national separatists only partially. The Bolsheviks defeated the Caucasian, Turkestan, Ukrainian, Cossack nationalists. But they lost to the Finnish, Polish and Baltic.

In the civil war, the White Army became an instrument of large capital, both Russian and foreign. The White Guards did not fight "For Faith, Tsar and Fatherland." Monarchists in the White Army were negligible. The White Guard counterintelligence at Denikin and Wrangel crushed the officer monarchist organizations.

Accordingly, the "White Idea" - liberal-democratic, pro-Western, was supported by extremely limited segments of the population. Less than 10% of the people. Liberal intelligentsia, bourgeoisie (owners of factories, newspapers and ships). Officers (part), White Cossacks acted as "cannon fodder", mercenaries of capital. 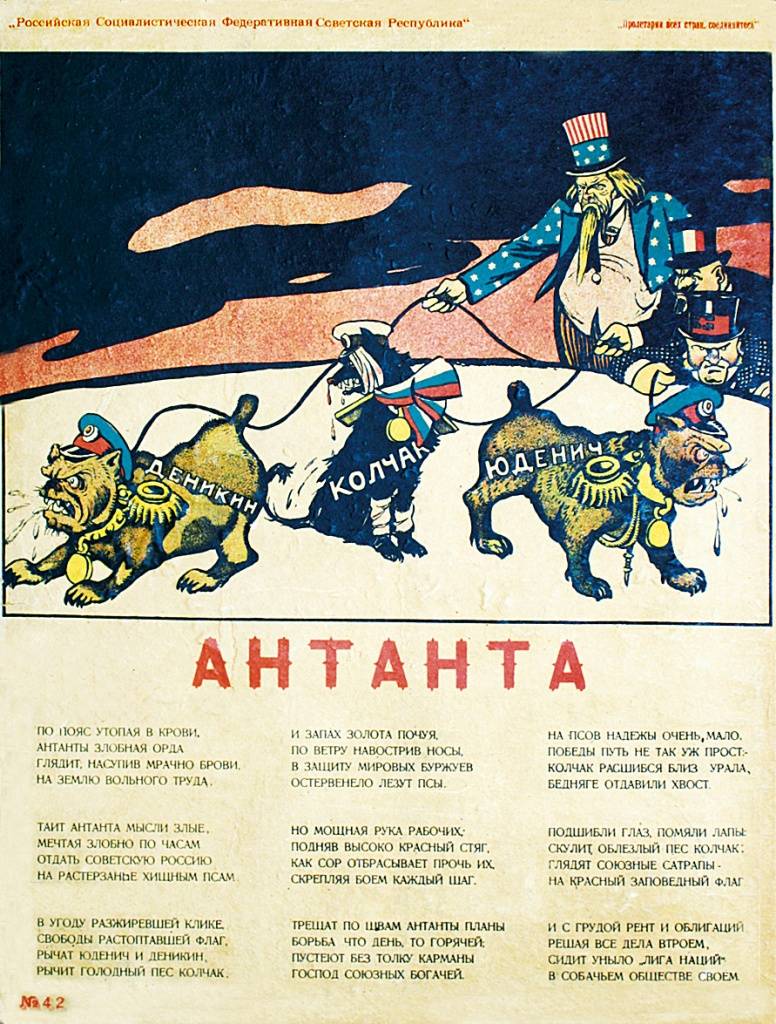 The Western European version of the development of Russia proposed by the Westerners (whites) was unacceptable for the Russians. Russia-Russia is not Europe, it is a separate, special civilization.

The image of an attractive, peaceful and prosperous future (bourgeois in Holland or Germany) was acceptable only for the “European” part of Russian society.

The matrix of Russian civilization (code, genotype) has entered an ever-growing contradiction with the political projects of the Russian elite. That is, Europe from Lisbon to Vladivostok (or at least the Urals) turned out to be a utopia. This contradiction led to the defeat of the White movement.

The "deep" Russian people did not accept the White Draft.

The Bolshevik project absorbed the values-codes, basic for the Russian civilization. Such as: the primacy of truth over the law, the spiritual principle - over the material, the general - over the particular.

The Bolsheviks proposed a world without the parasitism of a few "chosen ones" over the masses. The world of communism rejected the spirit of plunder, looting, appropriation and exploitation (capitalism). Communism stood on the priority of honest labor, conciliarism and unity of the working class. He offered an image of the future - a world of happiness, a community living according to conscience (that is, it was close to Christian socialism). Brotherhood and co-prosperity of peoples.

The Bolsheviks had an image of the future world attractive to the people.

And also an iron will and energy to bend the world under him. The Russian communists turned out to be the only force in Russia that, after the death of the Russian Empire (“old Russia”), tried to create a new reality, a new Russian world.

If it were not for the Bolsheviks, then Russia and the Russians would simply have left the historical arena (as planned in the West).