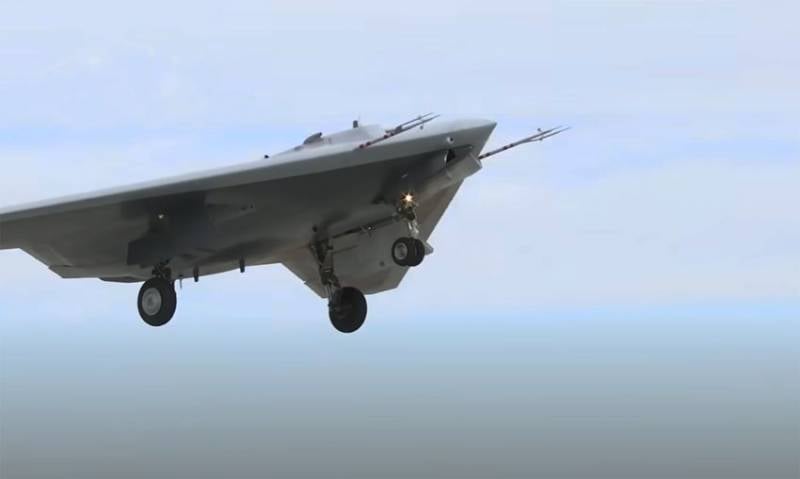 Not so long ago, there were reports of regular tests of the Russian heavy attack drone "Okhotnik", which is being developed according to the C-70 project. At the same time, it was indicated that the drone was tested, among other things, as an unmanned interceptor. It is this characteristic of the promising Russian UAV "Okhotnik" that has caused a special discussion among experts and ordinary readers interested in military-air topics. The topic is being discussed in the foreign expert environment.


In particular, one of the areas for discussion is related to the possible use of the "Okhotnik" in the Russian Aerospace Forces as a means of destroying attack drones. At the same time, it must be stated that today only a few states of the world possess self-developed strike UAVs, in the full sense of the word. Among them are the USA, Turkey, Israel, China. Taking into account the fact that in the past few months the Turkish attack UAVs Bayraktar-TB2 have been actively used in hostilities, it is assumed that the "Hunter" can be tested as a means of destroying just such drones.

Here it should be noted that there is a certain probability that the Turkish UAVs "Bayraktar" are at the disposal of Russian specialists. Such drones were shot down by various means of the Libyan National Army of Marshal Khalifa Haftar in Libya, Armenian air defense systems of Nagorno-Karabakh. These facts give reason to say that technologies, including those that reveal the functionality of data exchange, at least theoretically could be studied by Russian specialists.

Taking this into account, the use of the Hunter as a "destroyer" of Bayraktar attack drones - as one of the manifestations of direct air interception - is not something incredible. For such operations, the Hunter can act autonomously. And its very appearance in the sky over a particular combat zone where attack UAVs are used can become a decisive factor for these UAVs to cease to be used there ... Here one should also take into account the clear advantage of the Hunter in altitude and speed. Open sources indicate that its practical ceiling is about 18 thousand meters (the ceiling of "Bayraktar" is about 8 km), and the speed in high-altitude echelons is about 1 thousand km / h. This a priori provides the ability to perform combat missions to "accelerate" or directly destroy the Bayraktar-class attack UAVs in virtually any conditions.
Ctrl Enter
Noticed oshЫbku Highlight text and press. Ctrl + Enter
We are
Reports from the militia of New Russia for 27-28 September 2014 of the yearYuri Drozdov: Russia prepared the role of the sacrificial calf
Military Reviewin Yandex News
Military Reviewin Google News
137 comments
Information
Dear reader, to leave comments on the publication, you must sign in.