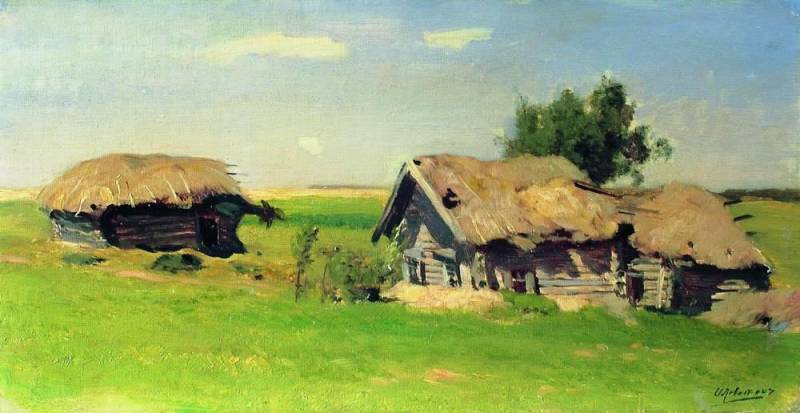 Isaac Ilyich Levitan. "Village". He is rightfully called the painter of the Russian countryside. And everything is drawn from nature. In fact, these are photographs ...

"The great chain broke
Torn - jumped
One end on the master,
Another peasant! ..
(Who lives well in Russia. N. A. Nekrasov)
The beginning and end of the peasant civilization. The topic of peasant civilization on the planet Earth and its particularity - the peasantry in Russia, aroused a clear interest among the VO readership. Now she has the third material on this topic in front of her, and here, finally (I think it's time!), She will also be presented with literature for independent reading, so that those who will be interested can deepen their knowledge of this subject. However, one book, I think, should be read by everyone, any literate citizen of our Fatherland. And I am very surprised that it has not yet been introduced into the school curriculum as an obligatory source. Maybe because there are words like "bitch" and "prolapse of the uterus", but at least in the tenth grade children should not be shocked. 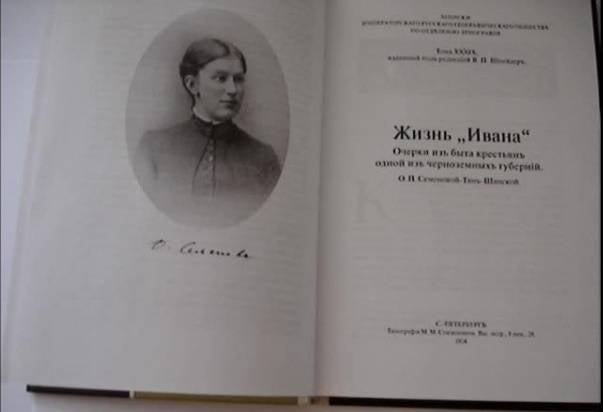 Book of Semyonova-Tyan-Shanskaya O. P. "Life of" Ivan "
This wonderful book is called “The Life of“ Ivan ”[1], and it was written by Olga Petrovna Semyonova-Tyan-Shanskaya, the daughter of a famous traveler, Russian geographer and academician. The book is valuable as a source because it describes everything that was before her eyes. You can learn a lot from it: for example, that an average-income peasant had a very decent farm, he had three horses, fifteen sheep and other cattle; there are prices for goods and products and the family budget, and about how they got married and ... cohabited before marriage; when they got married and got married, and also ... how often did the husband beat his wife, and what happened to him if she died from the beatings; how women "in the peasantry" carried and gave birth to children, and what kind of upbringing they had; what did they eat and what they drank, what clothes they wore; about their diseases and methods of treatment; about work and fun ... And about many, many other things, it is not for nothing that the book is called "The Life of Ivan". True, there are no generalizations in it. Everything described was related to the village of Gremyachka, Ryazan province, but it's like a drop of water in which the entire ocean is reflected! 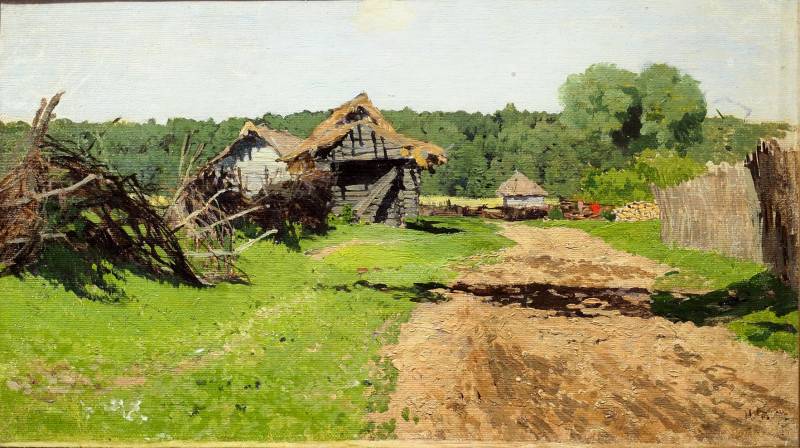 Isaac Ilyich Levitan. "Rural landscape"
There is also a very interesting dissertation on the peasantry of my beloved Penza province "Peasant economy of the Penza province in the second half of the 07.00.02th century" (topic of the dissertation and abstract on the HAC RF XNUMX, candidate historical sciences Ulyanov, Anton Evgenievich, 2004, Penza) [2]. True, there are a lot of such dissertations in all regions of Russia, and if desired, anyone who wants to can easily find a job in their region. But ... I just read this work "from and to" and I can say that "the product is good." Moreover, the abstract is read for free, but for the text of the dissertation downloaded from the Internet, alas, you have to pay. And who only came up with this ... 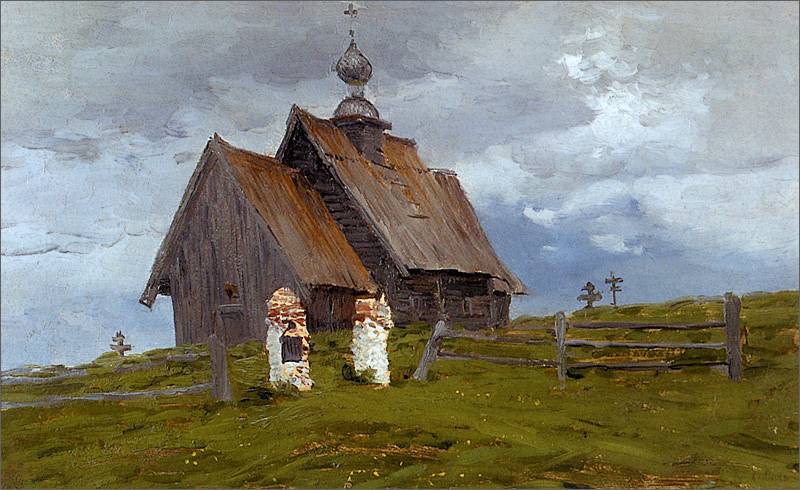 Isaac Ilyich Levitan. "Village Church" 1888
Well, now let us pass on to the actual position of the post-reform peasantry. And ... there is no point in describing the hardships of his position. But it makes sense to refer to the very interesting work of V. I. Lenin "The Development of Capitalism in Russia", written by him in 1896-1899, published in Tsarist Russia quite legally at the end of March 1899 by the publishing house of M. I. Vodovozova in St. Petersburg in the number of 2,4 thousand copies. In 2012, R.G. Pikhoi (Soviet and Russian historian, Doctor of Historical Sciences (1987), Professor (1989)) gave her the following assessment:

It is an almost exemplary work in the field of economic history, testifying to the author's extraordinary intelligence. Once in prison, and then in exile, he reworked a huge layer of statistics - the work contains links to more than 500 sources. The most interesting passage in Razvitiya ... is what Lenin wrote about the Russian countryside, about the inevitability of the destruction of the peasant community ... Even today, a doctoral degree would be immediately awarded for work of this level.
So the work is worthwhile, isn't it? And what did Lenin write about the peasantry there?

And he wrote something that our Slavophils and Socialist-Revolutionaries did not like very much, who dreamed of joining socialism through the peasant community. He wrote that it exists ... de jure, because with its help it is convenient for the government to collect taxes, but de facto, economically, it has long been stratified. That in the Russian post-reform village three social strata have already formed: the poor, the middle peasants and the kulaks. The first were poor not because of the lack of land, they had no "tax", the second had both land and tax, but ... they could not get out of poverty, because they lived "like everyone else", the communal psychology pressed on them, but the kulaks ... these just, disdaining this very communal psychology, lived by usury, robbing their fellow villagers and holding them in their fists on time with unpaid debts.

All this is confirmed by modern research. So, in the Middle Volga region and land shortage (and it was, of course), and an excess of free time in winter, as well as the availability of various sources of natural raw materials helped such peasant trades as weaving, down-spinning, leather and pottery, woodworking. A popular occupation was also otkhodniki - going to work in cities and temporary employment in factories and plants. 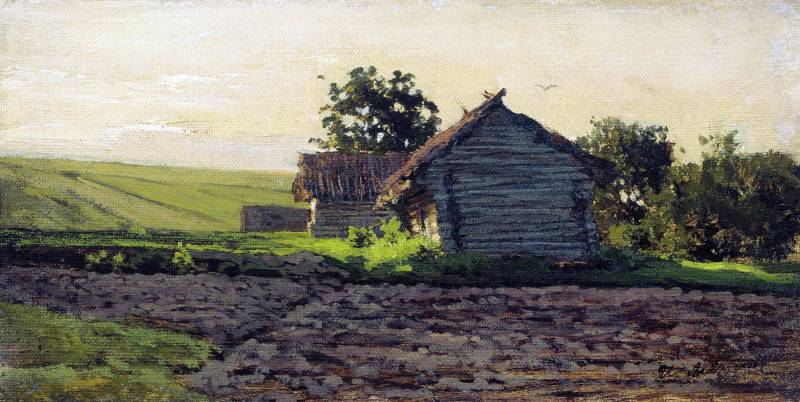 Isaac Ilyich Levitan. "Village"
And although each of this stratum lived with the psychology of "Ivan", being gradually changed the consciousness of the peasants. The goals of all these groups gradually diverged more and more, albeit very slowly. And from these same peasants, yesterday's serfs, raised by yesterday's slaves and "metressa" from the landowners' harems, our Russian proletariat was also formed. Hereditary workers were few. There were “winter roads” - those who worked at the plant in winter and peasants in the summer, there were those who “came yesterday” and hoped to return to the peasantry, there were those who broke up with them forever, but wiped the snot with their sleeve, as before, and someone has already learned how to use a handkerchief ...

And now let's turn to the modern "theory of generations" by Strauss and Howe, according to which a generation is a collection of people born in an interval of time equal to 20 years, or as one phase of human life, consisting of childhood, youth, middle age and old age. Representatives of the same generation usually belong to the same historical era: they are faced with the same historical events, they are worried about the same social phenomena. Therefore, they have one culture, common beliefs and behavioral patterns. Finally, members of the same generation share a sense of belonging to that generation with others. 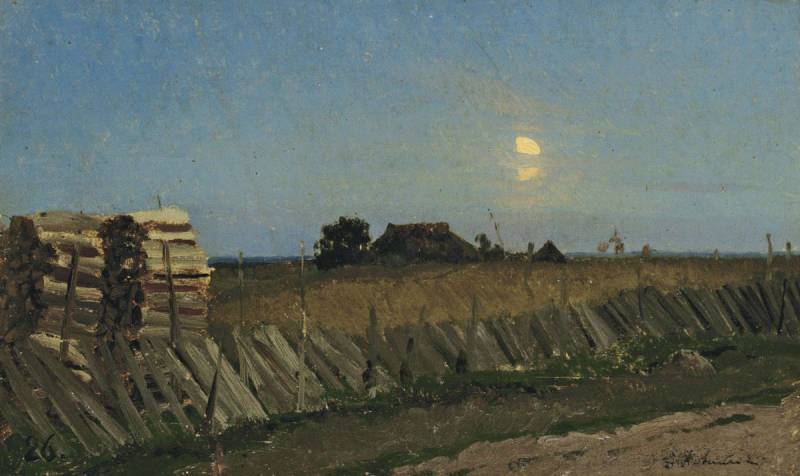 Isaac Ilyich Levitan. "Moonlight night". Actually, it would be more interesting to call this picture "The Fence Fell"
And now let's count a little: between 1917 and 1861, it turns out to be 56 years old, which at that time was already old age. This means that the revolution was made by the children and grandchildren of yesterday's serfs, raised by yesterday's slaves, people with a petty-bourgeois psychology, adhering to patriarchal views on life, with a morality permeated with a communal worldview. Undoubtedly, the city changed their outlook on life, the same, say, the newspaper Iskra, but no newspaper is able to shake the deep foundations of self-consciousness. Everything comes from childhood, and nobody described the childhood of these people better than Nekrasov. Personally, I would not wish an evil enemy to find myself in that childhood - see, again, “The Life of“ Ivan ”. 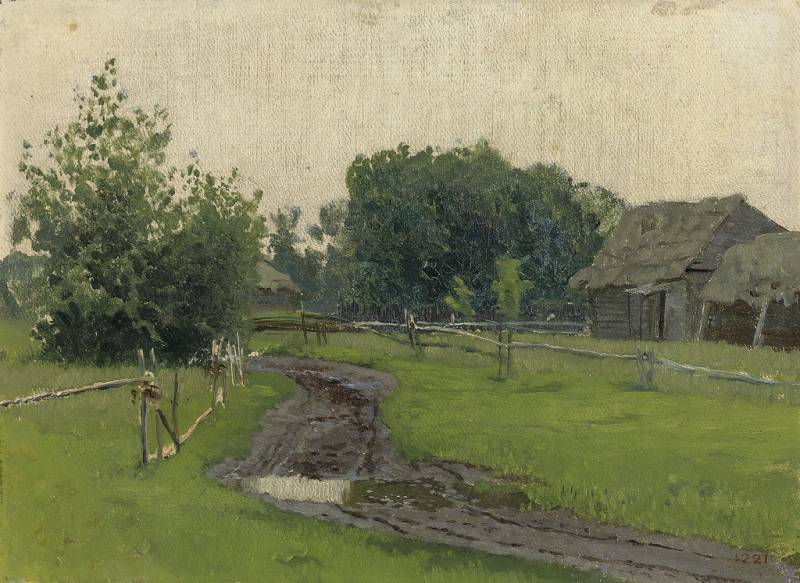 Isaac Ilyich Levitan. "The road to the village"
It is interesting that the arrival of a new way of life was accompanied by such a phenomenon as an increase in the number of the mentally ill. The Russian historian Y. Mironov in his article "Lessons from the 1917 revolution or who lives in Russia is bad" (magazine "Rodina" 2011-2012, №№ 12,1,2) provides data that from 1886 to 1913 the number such patients increased 5,2 times (this despite the fact that in Russia, according to tradition, such clinics were used only in the most extreme cases!), and from 1896 to 1914 the number of patients per 100 thousand inhabitants increased from 39 to 72 people. That is, the "new life" had a very hard effect on many! But this does not include those who were treated in private clinics, and who needed to be treated, but were afraid that he would be nicknamed "psycho". That is, the demolition of the old society was painful in all respects. However, for the most part, among the peasants, and among the workers from the peasants, and even among the most hereditary workers, the consciousness remained largely peasant, patriarchal, and ... petty-bourgeois, with a tremendous mass of vestiges of the past worldview. After all, there was such a world around them, and they did not know anything else. But the peasants ... of course, one cannot say that they were complete "savages" then. But how else can one characterize this case ... And it so happened that in 1888 the artist Levitan went for impressions, and this is what came of it:

We tried to stay in the village of Chulkovo, but didn't get along there for a long time. The population, who had never seen their "masters", reacted very wildly to us. They followed us in a crowd and looked at us like some kind of Aztecs, felt our clothes and things ... When we started to sketch, the village was seriously alarmed. - Why do gentlemen write off our houses, ravines and fields? Wouldn't that be a bad thing?
They gathered a gathering, for some reason they even began to call us: dashing gentlemen. All this got on our nerves, and we hastened to leave. [4] 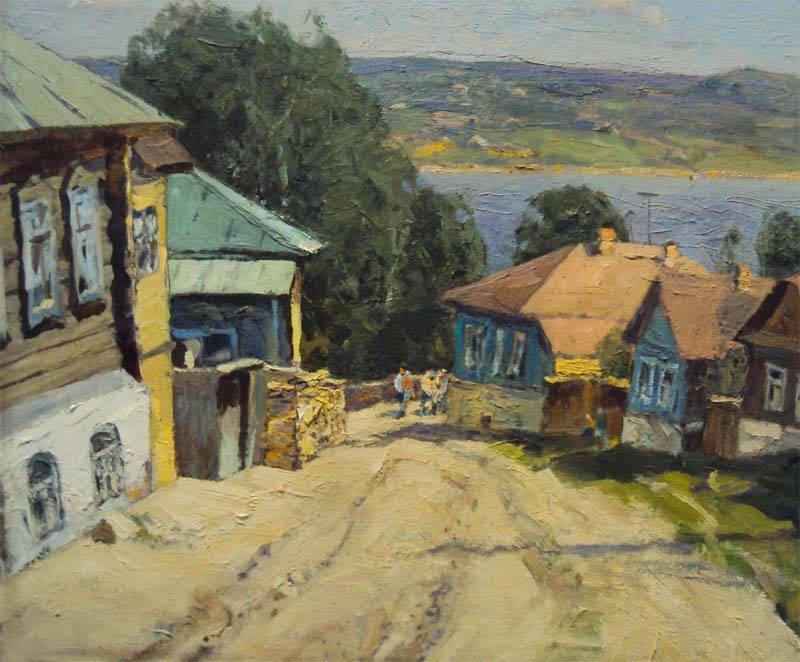 Isaac Ilyich Levitan. "Plyos" - this is where the "dashing gentlemen" moved to paint their pictures ... An illustrative case, isn't it? But, unfortunately, it is far from the only one that demonstrates an extremely low level of culture in the "lower classes"

1. O. P. Semyonova-Tyan-Shanskaya. “The Life of“ Ivan ”. Essays from the life of peasants in one of the black earth provinces
2. "Peasant economy of the Penza province in the second half of the XIX century." The topic of the dissertation and abstract of the Higher Attestation Commission of the Russian Federation 07.00.02, Candidate of Historical Sciences Ulyanov, Anton Evgenievich, 2004, Penza
3. E. Permyak "The Humpbacked Bear" (the life and customs of the patriarchal Russian peasantry and peasant workers of the Perm Territory are very well shown)
4. E. V. Pervushina. “The estates and dachas of the Russian intelligentsia. Owners, guests, country life ”. SPb., "Parity", 217, p. 320