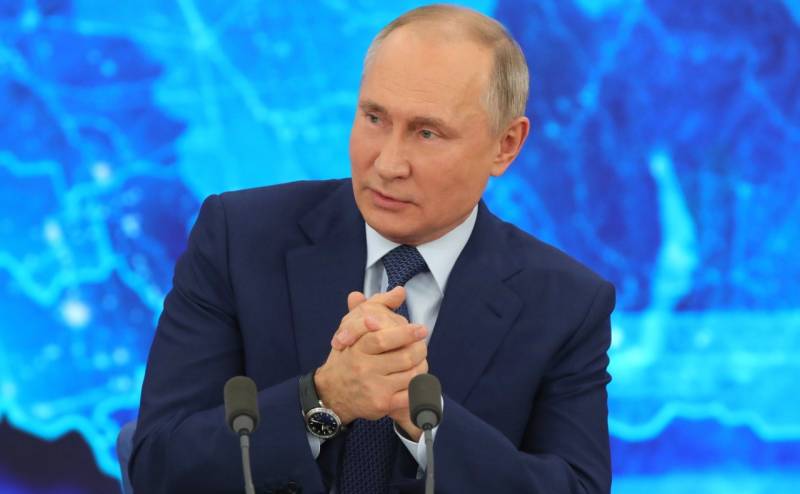 Each press conference of Russian President V.V.Putin causes serious changes in the plans of many leaders of world powers. I would even say that every statement by Putin becomes either a guideline for some movement forward, or a headache on how to stop it. Everyone is already so accustomed to the fact that any word of the Russian president is backed up by some deeds that even the thought does not arise to doubt this word.

As we are accustomed to, that Putin rarely speaks out twice on the same occasion. Today, for example, one of my acquaintances from Ukraine complained that yesterday the phrase about the statehood of Ukraine was not repeated in the event of military aggression in Donbass. But when asked whether he himself remembers this statement by Putin, the answer was yes. Well, many people in Ukraine remember this. Then why repeat yourself?

Personally, I was interested in one fact, which was reported by our news agencies today. The US President's special envoy for armaments Marshall Willingsley unexpectedly interpreted the words of President Putin about Russia's readiness to negotiate START III. Let me remind you of the essence of Putin's statement: Russia is ready to continue the dialogue on the strategic START-3 treaty, but "we need some kind of reaction from our American partners."

@KremlinRussia_E, we have already answered, repeatedly. We offered five times, including in writing, to meet to finalize the freeze / extension deal, to which Putin agreed. @RussiaMFA rejected all meetings.
All we need to do is determine what exactly we are freezing and the maximum level, and start negotiations on verification.
For whom it is intended - it is not clear. What the American official writes about has already been discussed, and Russia rejected this version of the treaty. I think it is not necessary to talk about the reasons for this decision. History We discussed it in some detail in both Russian and foreign media.

Probably, it is not very decent to quote an American gangster in a serious article, but "to live with wolves ..." I wonder what caused such a quick reaction of American officials to the statement of the Russian president? How long has passed since the start of talks about breaking the START treaty, and we have not seen any particular interest from the American side. And then the monitors did not have time to cool down, and the officials were already stirring.

Moreover, it is important to understand that the United States, through the lips of its special representative, is again proposing a plan that is obviously unacceptable for Russia. On the one hand, it seems that the United States is in favor of negotiations, and Russia is the culprit for the fact that the new treaty has not been concluded. On the other hand? On the other hand, it is now important for the Americans to gain time to think about what the Russian president said.

Russia is ready for negotiations, but it will live quite calmly without them. This is approximately the meaning of Putin's message. And this means, keeping in mind the aforementioned about Putin's word, Russia will cope with the threats even if the US and NATO want to implement their plans for the physical destruction of the country today. For we have enough strength to answer in any direction.

Is it really so? You can argue on this issue endlessly. You can compare the number of carriers, the number of warheads, missile defense forces, and so on. But a simple question arises, the answer to which crosses out all the "mathematics". How much better will it be for the residents of Berlin or Washington if not ten, but only five missiles with nuclear weapons hit their city? How much better will the residents of Moscow or St. Petersburg be if only half of what is directed will fly to them?

Shortly before the president's press conference, Russia conducted a series of missile launches. The messages about this looked pretty standard. "Today from ... a missile was launched ... The missile successfully hit the target in a given square." Especially, at least for me, the underwater launch of four Bulava missiles at once from the Vladimir Monomakh missile cruiser looked impressive.

To be honest, I still admire the work of the crew of this submarine. Just because I can imagine how the crew had to act after the missiles left. By the way, "Bulava" is 36 tons ... One-time lightening of the boat by 145 tons! And if we add to this that all the missiles hit the target, then ... This is impossible, but it exists.

Meanwhile, if we combine all the messages of the press service of the Ministry of Defense into a single whole, we will receive one, but very important message. Large-scale nuclear triad exercises took place in Russia. During the exercise, the fighting qualities and readiness to strike retaliation were tested with all the means available to the Russian army!

In order not to be unfounded, I will indicate with a dotted line the scheme according to which the exercises were conducted.

The first to begin the exercise were the Tu-160 strategic bombers. Having risen from the Engels airbase, they struck at targets at the Pemboy training ground. Then, taking into account the distance and flight speed from the "Ukrainka", Tu-95MSM (the last modification for today) rose into the air. That is why the 95s struck second on the same targets. "Bears" mixed with the earth what was left after "Swans". The strikes were delivered by Kh-101 missiles. And there is no need to have seven spans in the forehead - it is clear that in a real combat situation it would be X-102 with 1-2 megaton warheads.

Further, the Plesetsk test site was involved. It was from there that the Yars missile hit the target. Moreover, according to some unverified sources, this was the last modification of Yars - Yars-S. Again, according to rumors, the Yars-S missile carries a reinforced warhead. But be that as it may, the rocket hit the target at the Kura test site.

At the same time, the K-18 "Karelia" was involved in the case. The same "Dolphin" or Delta-IV according to the classification of our NATO partners. The boat successfully “helped” “Yars” by launching its “Sineva” on the same Kura training ground. Well, the next day, after the announcement of the completion of the launches, the Vladimir Monomakh distinguished himself, which I wrote about above.

I am especially pleased to write about the launch from the Vladimir Monomakh and for personal reasons. Some time ago, in an article about the situation in the Far East, I mentioned that the strategic tasks for the Pacific fleet nobody canceled. How much criticism it then caused from some readers. And here's the answer. There are simply things that should not be talked about for reasons of secrecy or lack of evidence.

I will not start with facts or speculations about what really happened. I'll start with a quote from Elena Pakhomova's YouTube channel. The quote belongs to the well-known Israeli political expert, general, former head of one of Israel's special services, Yakov Kedmi. Kedmi is quite well known to Russians due to his frequent participation in various political shows.

The US Secretary of Defense said two years ago that Russia is the only country that can destroy America in half an hour. And the Russian president was asked about this at a press conference. He was silent for a moment, smiled and said: "faster."

Of course, the opinion of an Israeli expert is just the opinion of an expert and can be challenged. Yakov only voiced the words of Russian President Putin. And there must be iron arguments behind the president's words. From which I conclude that at the moment we are quite comparable or even somewhere superior to the power of the American army.

Many political and military experts say and write that the situation in the world is tense to the limit, and the likelihood of a world war no longer seems to be something fantastic. The unpredictability of some leaders of states has already become familiar. Periodic clashes on the borders, terrorist detachments, sabotage by some states are also common.

The plans of the Pentagon and NATO are also known. Now they are practically not hidden. The world is being broken through the knee, and one-two-ten million human lives that can disappear in the flames of a new war do not frighten anyone. We, I mean ordinary people, have already ceased to be afraid of war. And this does not depend on the country of residence of the person. We are a generation, most of whom know war only from computer games. For games in which we have many lives ...

It seems to me that the conducted exercises of the nuclear triad and the words of Russian President Putin, said at a press conference yesterday, helped the hawks from the Pentagon and Brussels to somewhat change their attitude towards modern warfare. Simply put, Vladimir Putin has slightly corrected the policy of the future administration of the US President towards peacefulness. As befits world leaders.

Ctrl Enter
Noticed oshЫbku Highlight text and press. Ctrl + Enter
We are
About Stalin and KhrushchevWhat you didn't want to know about England
Military Reviewin Yandex News
Military Reviewin Google News
88 comments
Information
Dear reader, to leave comments on the publication, you must sign in.