Does Armenia have a future under Prime Minister Pashinyan 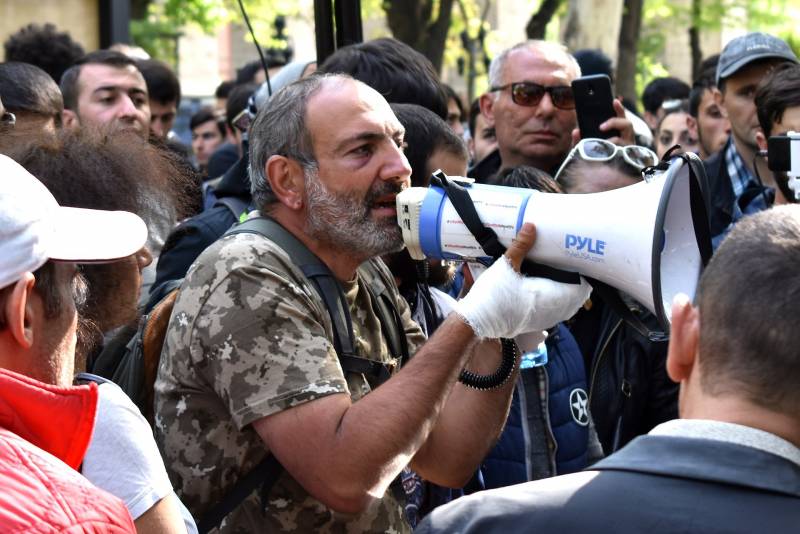 A strange sensation arises after News from Armenia. On the one hand, the citizens of Nagorno-Karabakh who are returning home and the Russian peacekeepers on the roads. On the other hand, the opposition’s daily speeches for the resignation of Prime Minister Pashinyan, many politicians who publicly speak about the prime minister’s leaving the party, and the seething of society.

For me personally, the situation in Yerevan today resembles the situation in Washington. And Prime Minister Nikol Pashinyan reminds me of President Trump. Both leaders do not want and cannot agree that they need to leave. Both are looking to blame for their failure. Both are doing everything to destabilize the situation in their countries.

I remember Pashinyan at the opposition rallies two years ago. The very same democratic fighter for the freedom of the Armenian people against the usurpation of power. And his statement then, in 2018, about his attitude to the authorities:

“On the day when the citizens of Armenia decide that we should resign, we will do it within 15 minutes. I will never cling to power. Anyone who says that the Civil Contract party has power does not understand anything, since in Armenia only the people have power. "
It is clear that even then, in that period of revolutionary romanticism, everyone understood that these were the words of a populist. But how did they act on the electorate! How warmed the souls of those who wanted change! And those who believed that they were living badly, but would live well under the new power. Yes, people always believe that after the victory over evil is won, it will never return.

I immediately recall the film by Mark Zakharov "To Kill the Dragon" based on the play "Dragon" by Yevgeny Schwartz. How does this parable resemble situations that periodically arise in different parts of the world, in different countries. And these politicians do not care about the ratings, the opinion of the people, the state of the country. They fulfill the will of those who once secured their election to a high office.

In 2018, Pashinyan won the election with the support of 75% of voters who came to the polls, or 30% of all voters in Armenia. Doesn't the situation resemble the one that our restless neighbors had, who have already surpassed even World War II in their war?

Alas, if today all three politicians I mentioned suddenly took part in the elections again, with the exception of Donald Trump, who is still participating in them, then the probability of their victory would be zero. Disappointment came very quickly. Those who are chosen to rock the country can rarely deceive the people for a long time. Pitching is such a thing, everyone feels on himself, and does not learn from the captain on the ship's communications.

Democracy must be democratic

Another oddity that is clearly striking is the intensification of pluralism of opinions. It would seem that this is an excellent manifestation of democracy. This is freedom of positions and views. What has this democracy led to in the United States? We saw. These are pogroms, racism, humiliation of some and impunity for others.

What is the result of this activation of democratic institutions in Ukraine? We also see. The TV channels of the Square are now simply packed with political programs in which politicians and supporters of the most radical, right-wing and left-wing views, participate. A few moderate political scientists and experts will simply sink amid the abundance of aggressive speeches by radicals.

Result? Disruption of the Minsk agreements, activation of hawks, diversion of people's attention from economic problems. The rallies, which are held almost daily in Ukraine, no longer interest anyone. People are used to the fact that everything is bad. But their heads are preoccupied to a greater extent with the "hybrid war with the aggressor." President Zelensky and Russia are to blame for all the troubles of Ukraine.

Exactly the same is happening today in Armenia. Rallies, processions, arrests of oppositionists and their quick release in courts, television talk shows and more. Perhaps I am not entirely right, but it seems that the authorities have now deliberately "let go of the reins." And Nikola Pashinyan plays here exactly the same game that President Zelensky and President Trump are playing.

The feeling that all this street and television activity is very tightly controlled by the government and personally by the prime minister does not leave me. The ears of the troll factories are too "visible" even in the comments to the materials of our publication.

VO is constantly an arena of struggle between different points of view. Only often does such a struggle turn into mutual claims and insults. The classic way to talk about the problem and bring the enemy out of a stable state.

The legend of the savior of the country

Many leaders of the former socialist countries came to power on the wave of “saving the fatherland from the communist infection”. But some of these states in political terms seemed to lag behind others. There the "rescuers" came to Olympus even when the first wave of similar warriors in the advanced countries had already left the political scene.

Nikol Pashinyan looks exactly like this "late". The same was, for example, Mikhail Saakashvili. Maya Sandu will be the same. This position is obviously losing. Simply because such people come to power at a time when the people themselves have not yet determined the vector of development of their homeland. When salvation for a part of the population looks like destruction.

The defeat in the war for Pashinyan was a blow that he could not withstand. He perfectly understands that he is personally to blame in many ways. It's one thing to speak, and quite another thing to do. And nothing was done to prevent the situation in which Karabakh found itself at the beginning of the war. The prime minister cared more about Armenia than about the Armenians in Nagorno-Karabakh.

But today something else is also very noticeable. More and more often, among his supporters, the voices of those who do not consider Pashinyan to be the culprit are heard. Now the blame is being shifted to everyone who was around, who "did not fulfill", who "did not advise", who "misled the head of government" ...

I often hear the opinion that Karabakh was specially surrendered to Baku. I will not dispute this point of view, as well as support it. Indeed, the strange war waged by Armenia looks ugly. How ugly those Armenian men look who even now yell about betrayal, but did not go to Karabakh themselves.

It is quite possible that Yerevan thus decided to fulfill the decisions of the UN Security Council, but this can only be confirmed if there are documents confirming such agreements with Azerbaijan. The argument, of course, is very dubious. Capable of blowing up not only the situation in Yerevan, but also in Baku. I do not think that the same President Aliyev would have been able to agree to such agreements.

Today, many of those who until recently supported Nikol Pashinyan fled to the camp of his opponents. Respecting or not respecting deserters is everyone's business, but it is worth listening to what they are talking about now. First of all, I was interested in the state of mind of a person who is at the head of the Armenian government.

Today, according to those who until recently were in the inner circle of the Prime Minister, Pashinyan became hysterical, he is overwhelmed by suspicion. Everywhere he sees conspiracies and intrigues against himself. I don’t know whether to believe it or not, but if we accept such statements as true, then this can explain the disappearance of the Armenian Prime Minister in the last days of the war and in the first days after the signing of the peace treaty.

Some conclusions about the situation in Armenia

It seems to me that today the situation in Armenia is tense to the limit. External manifestations are not yet so noticeable. Simply because the country is “leaving” after the defeat in Nagorno-Karabakh. We urgently need to take some measures to stabilize the government, to calm down the people. The ideal option would be to elect a new prime minister.

However, it is doubtful that Nikol Pashinyan will agree to this. Not even because he is afraid of his completely predictable defeat. No, he really believes that he is not to blame for the defeat. He believes that he really saved Armenia from the aggression of Azerbaijan. And it is this conviction that makes him hold on to the power chair. And so much so that, in my opinion, even very serious repressions against his political opponents are quite possible.

Theoretically, the country can be stabilized even if Pashinyan is kept in the prime minister's chair. But then there are many questions about the future.

First. And, perhaps, the most important thing for any Armenian is how to overcome the feeling of defeat in the war. Yes, exactly the feeling of being defeated.

Let's just remember one already forgotten fact, which is very indicative for the Caucasus. When the Armenians fled from Nagorno-Karabakh, many families took with them the ashes from the graves of their ancestors, fearing that the graves would be desecrated. This is not forgiven in the Caucasus. The person who allowed this is cursed forever for these people.

Second. What we are seeing now in the power structures and in the political life of Armenia is quite indicative. Pashinyan began to remove unwanted officials and politicians. It is not the official's business qualities that come to the fore, but his personal loyalty to the prime minister. Everyone knows what this policy leads to. To the weakening of government. Moreover, in all areas.

Well third... The defeat in the war has seriously strengthened the position of the President of Azerbaijan in the region. Conversely, Pashinyan's position is extremely weakened. So what or who can prevent Baku from continuing to demand any concessions from Armenia for itself?

Moscow can interfere? It is highly doubtful.

We remember well whose protege is the Prime Minister of Armenia. And what kind of policy towards Russia he pursued during his leadership of the government and is pursuing now.

It is clear that under these conditions Moscow will agree to support Armenia only if the country's course changes to a pro-Russian one.

So Armenia is still at a crossroads today.