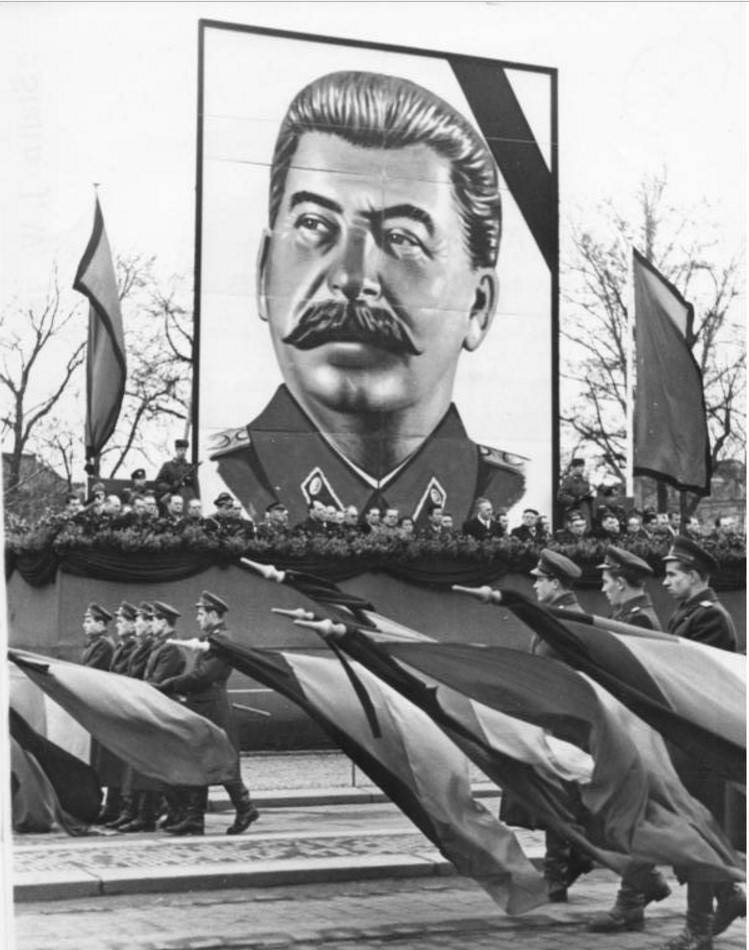 Nikita Khrushchev, who after the death of Stalin was rather unexpectedly elected first secretary of the CPSU Central Committee, almost immediately fell under the suspicion of his foreign comrades-in-arms. And not only because of Stalin's strange death, but also due to the fact that at his suggestion the body of the leader was replaced, which was somehow hastily put into Lenin's mausoleum.

Having debunked the personality cult, as it seemed to him - once and for all, Khrushchev in the end could not stand it. On November 11, 1960, at an international meeting of communist parties in Moscow, he very recklessly declared:

Do you still need this dead nag? We will send you this sarcophagus in a special carriage. "
The new Soviet leader, who launched a campaign to debunk the personality cult, did not hide his irritation with official criticism of his anti-Stalinist hysteria. As you know, quite a few people participated in the campaign to defend Stalin - the Communist Parties of the PRC, DPRK, Albania, Romania and 15 more developing and capitalist countries.

The Eastern European satellites of the then Kremlin elite, fearing the consequences, preferred to remain silent. But the delegations of the PRC and Albania immediately left this meeting. Almost a year later, on the night of November 1, 1961, Stalin's body was prudently reburied at the Kremlin wall. 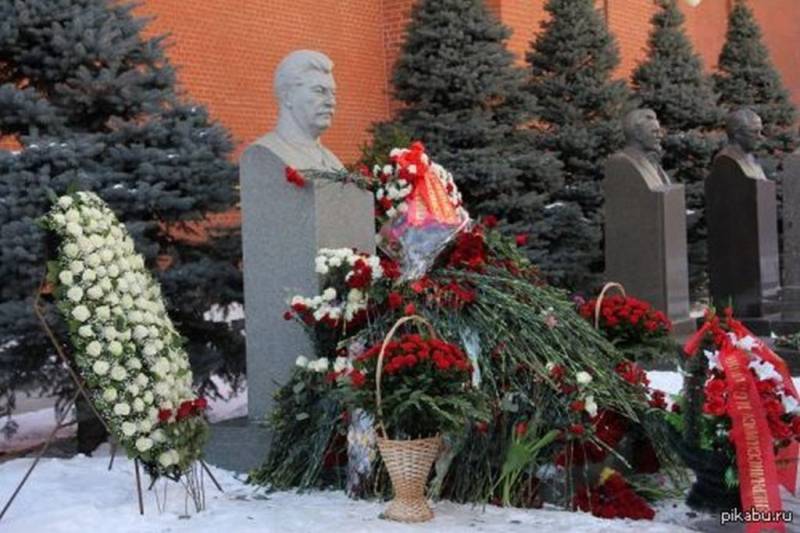 But even then there were those who plucked up the courage to express their doubts: what if foreign comrades would certify the forgery right in the mausoleum?

Among these brave ones was Haji Leshi (1913–1998) - one of the leaders of socialist Albania, the closest associate of the “Albanian Stalin” Enver Hoxha. He recalled that only:

“Brezhnev interrupted Khrushchev's anti-Stalinist hysteria, but did not condemn his lies about Stalin and the blasphemy over his ashes. This was prevented by the Khrushchevites in the Soviet Politburo, Tito, and the pro-Khrushchev leaders of the Warsaw Pact countries.

Brezhnev also feared the reaction of the West, not counting the restoration of relations with China and Albania more important than cooperation with the West. Only in 1970 was a bust installed on Stalin's grave, which we and the leadership of the PRC had long demanded.

But the Brezhnevites did not remind the bust of the Generalissimo, choosing the option of a bust without the Generalissimo's shoulder straps, and even made of a cheap stone. And the Kremlin rejected requests from the PRC Embassy in Moscow to lay wreaths to this bust with the participation of our delegation, fearing a resonance among the Soviet communists.

Haji Leshi was the head of Sigurimi and the Minister of Internal Affairs of Albania in the 50s. From 1953 to 1982 headed the National Assembly (parliament) of the country. In 1996 he was sentenced to life imprisonment, but was soon released.

Since May 1961, Beijing and Tirana have repeatedly received proposals to Moscow about a worthy funeral for the leader of the peoples. Among other things, the following sounded:

"We are even ready to buy the Stalinist sarcophagus for installation in the Sino-Albanian mausoleum in Beijing."
Finally, in June 1963, in an official letter from the Central Committee of the CPC to the leadership of the CPSU, which was also published in China, comrades from the Middle Kingdom decided to explicitly declare the secret cremation of Stalin's body. The Albanian leadership openly declared the same at the same time. And Moscow never responded to accusations of a monstrous forgery ...

Another characteristic stroke in this regard: Mao Zedong, who visited Moscow in November 1957, was barely persuaded (in front of the mausoleum itself) to visit it: he walked through the sarcophagi of Lenin and Stalin at a fast pace - almost in one minute. And without looking at these sarcophagi ... 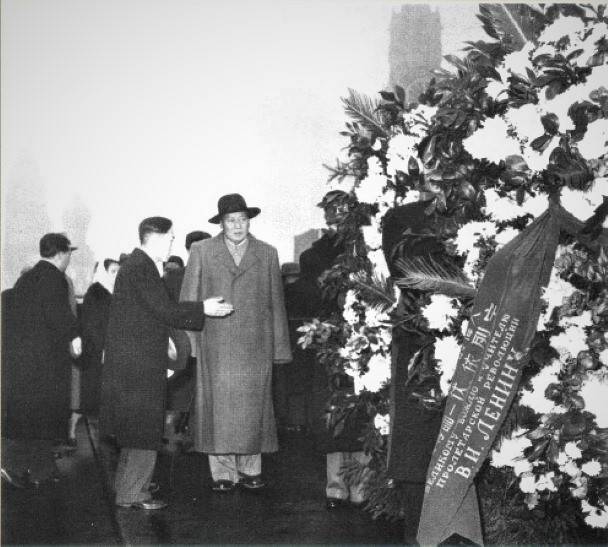 A wreath from the CPC-PRC with the inscription “I.V. Stalin "Soviet newsreels in 1957 defiantly did not show.
Mao clearly knew that Stalin's mausoleum was "removed" (or even not put there) and what was then done with his ashes. Therefore, he did not come to the funeral events in Moscow in the first decade of March 1953. Just as the leaders of the DPRK, North Vietnam, Albania - Kim Il Sung, Ho Chi Minh and Enver Hoxha ("The posthumous fate of Stalin").

Not just a version

It seems that the Sino-Albanian version of Stalin's substitution was justified. This is indirectly confirmed by the recently uploaded two-hour documentary "State Funeral" (2019) in full on YouTube.

Compiled by director Sergei Loznitsa (Ukraine) from photographs and films of the KGB of the USSR, the Union republics and some foreign embassies, which are “closed” to the public. We are talking about farewell to Stalin and his funeral (March 6-9, 1953). 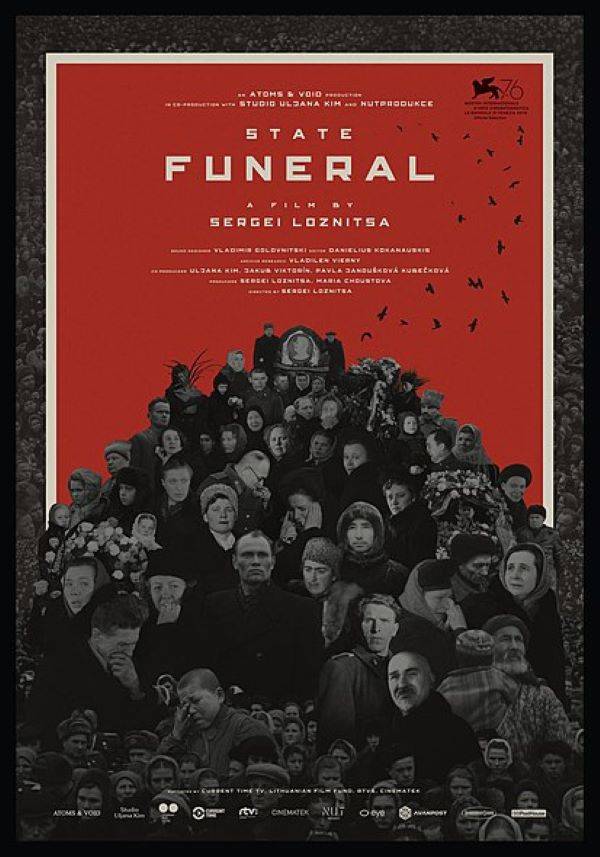 State funeral movie poster (2019)
Everything shown in this film confirms the version not only and not so much about the physical elimination of Stalin by his “associates”. But also that both they and their subordinates, even in public, barely concealed their "deep satisfaction" with such a successful operation. And also that in the Stalinist sarcophagus there could well be a dummy double.

The Spanish historian Cesar Cervera leads to the same version in a recent publication in the popular Madrid weekly ABC. In an issue of March 5, 2018, Servers quoted the then US Ambassador to the USSR, George Kennan:

“... The agony lasted for several days. Death occurred on March 5, 1953: this is the official version. However, there is still an assumption that Stalin could have been killed. Fear and hatred for the aged tyrant in his environment were so strong that it seemed that the air around him was saturated with them.

Stalin's inner circle was frightened by the new massive purges of their ranks.

... When the dictator was found on the floor in the room, Lavrenty Beria was the first to come to the rescue. However, he was very unhurried.

... The doctors were still trying to do something when Khrushchev came up and said: “Listen, drop this, please. The man has died. "

But the division of power, according to the testimony of this impartial contemporary, took place in advance:

“... An hour and a half before Stalin's death, at 20:40, a meeting of the plenum of the Central Committee, the Council of Ministers and the Presidium of the Supreme Soviet of the USSR took place. Everyone was in such a hurry to bury Stalin and appoint a successor to him that they did not even wait for the leader to die. "

As for the relevant evidence in the aforementioned film, there is plenty of it ("Farewell to Stalin").

In the early morning of March 6, those who brought the sarcophagus to the Hall of Columns and opened it to start parting, according to the testimony of a few contemporaries, were with calm, serene faces, with a kind of "relieved" gaze.

Those who were then in the building of the former Noble Assembly, drew attention to the strangely proud appearance of Beria, Khrushchev, Malenkov and other "associates" during the farewell ceremony. Nothing changed when the carriage with the sarcophagus proceeded to the Mausoleum. 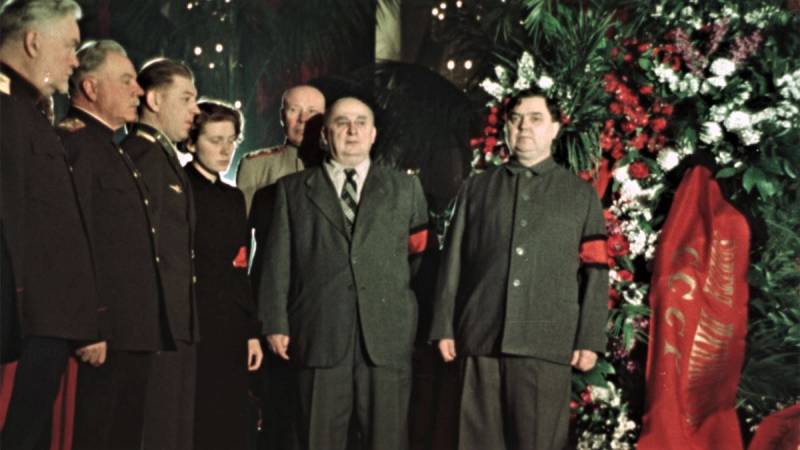 In the photo - Bulganin, Voroshilov, Vasily Stalin, Svetlana Alliluyeva, Beria, Malenkov.
Yes, the Kremlin elite had enough trouble in those days. And with downcast eyes, as can be seen in the footage of the chronicle, there were only PRC Premier Zhou Enlai, Molotov and Vasily Stalin.

Svetlana Alliluyeva's aloof look is also noteworthy in the same place: she does not look at the sarcophagus, but, as it were, “surveys” the situation around.

It is also characteristic that the sarcophagus was installed under guard 20 meters (!) From the stream of parting fellow citizens and citizens of other countries. Moreover, in a dense ring of wreaths and flowers. And the funeral guard of political figures of the USSR and abroad was determined 15 meters from the sarcophagus.

And on March 8, the security noticeably accelerated the pace of the flow of farewells: this was the order of the government commission. The fact that some people fell right at the entrance to the building and the Column Hall itself was not taken into account. They immediately lifted, removed ... 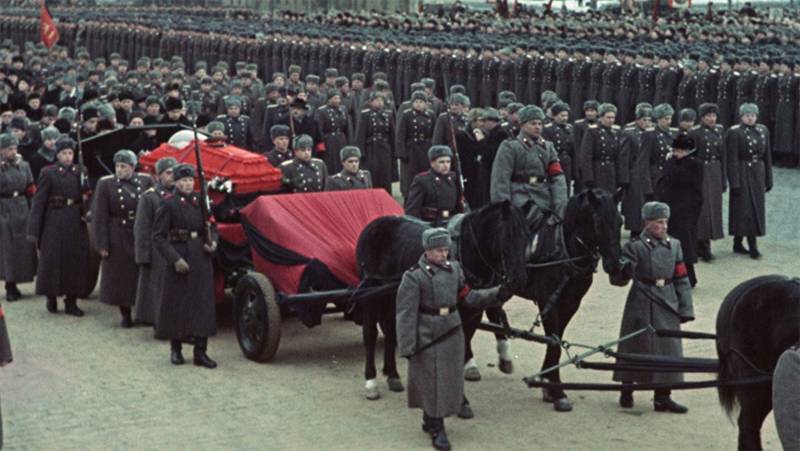 Many enterprises and institutions, the Central Committee of the Communist Parties of the Union republics, the authorities of the socialist countries and foreign embassies asked to extend the farewell ceremony until March 11 inclusive, but the timing of its completion in the Kremlin did not change: until 8:30 am on March 9.

That is, someone clearly took care that the parting citizens did not "sharpen" their eyes on the appearance of Stalin in the sarcophagus. To end the ceremony as soon as possible is, of course, cynical, but how practical.

Attention is drawn to the footage of the arrival of foreign delegations in Moscow. All of them, including those not from socialist countries, with a mournful expression on their faces - even representatives of the "restored" Yugoslavian Embassy in the USSR since March 8, 1953. But the Soviet greeters busily shake hands with the newcomers and almost smile.

Today we cannot fail to note the inclusion in the guard of honor at the sarcophagus (March 8) of the Minister of Defense of Poland, Marshal Konstantin Rokossovsky, Deputy Chairman of the Council of Ministers of Romania, Colonel Nicolae Ceausescu, head of the Spanish Communist Party Dolores Ibarruri, Premier of the State Council of the PRC Zhou Enlai. They modestly and sadly lowered their gazes, they did not look at the sarcophagus at all.

On the podium of the mausoleum, all the "comrades-in-arms", excluding Molotov, look over the people on Red Square with inspiration. Their mourning speeches sound with a touch of invigorating optimism.

The heads of foreign delegations personify grief, and the head of Poland, Boleslaw Bierut (who will be poisoned in Moscow after the XNUMXth Congress of the CPSU), as well as Zhou Enlai and D. Ibarruri gaze intently at the sarcophagus in front of the mausoleum.

"Comrades" are asked to remain silent

Documents show that the three asked the Soviet government commission for their brief speeches from the rostrum of the mausoleum. However, Khrushchev and the hardened apparatchik Malenkov persuaded foreign associates to give up this: they say, they already delayed the farewell and the funeral ...

In a word, too much allows today to doubt the natural nonviolent death of the "leader" and "teacher". And most likely in the replacement of his body soon after his death.

However, very few had the courage to figure it out. Nevertheless, Beijing in 1963, and soon Tirana, together with a number of foreign pro-Stalinist communist parties, not without good reason accused Moscow of forgery.

And without any Kremlin denials. 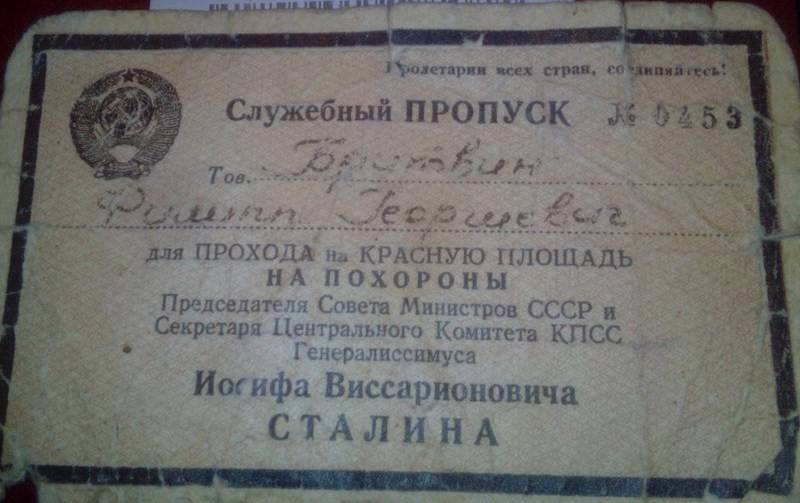 Such blanks of passes (see photo) (over 30 thousand copies in total) began to be printed, as is evident from the documents of the First Model Printing House, starting from February 27, 1953. Although the official version of the Kremlin said that Stalin had a stroke on the night of March 2, 1953. Moreover, the Soviet media published this version only on March 4 ...

It is significant that it was on March 1, 1953 that Radio Osvobozhdenie, which in 1959 began to be called Radio Liberty, first went on the air and ... then it announced that

"Stalin is dying, if not already dead."
These facts themselves confirm (albeit indirectly) that the elimination of Stalin, who was only 73 years old, was most likely violent. And the prophecy of an ordinary Soviet citizen of March 7, 1953 is very characteristic:

“... Semiletov I.Ya., a beekeeper from Tbilisi, during the mourning for Stalin said:“ The mourning flags were hung out “to close our eyes” to what happened and what will happen. He said that "comrades-in-arms will share portfolios for a long time," and now life in the USSR "will go towards the restoration of capitalism" ("From the supervisory proceedings of the Prosecutor's Office and the Supreme Court of the USSR in cases of anti-Soviet agitation and propaganda: March 4-15, 1953" , GA RF.F. P-8131.Op. 31.D. 40806).
State funeral Farewell to Stalin, dir. Sergey Loznitsa