The US starts a "cold war" against China 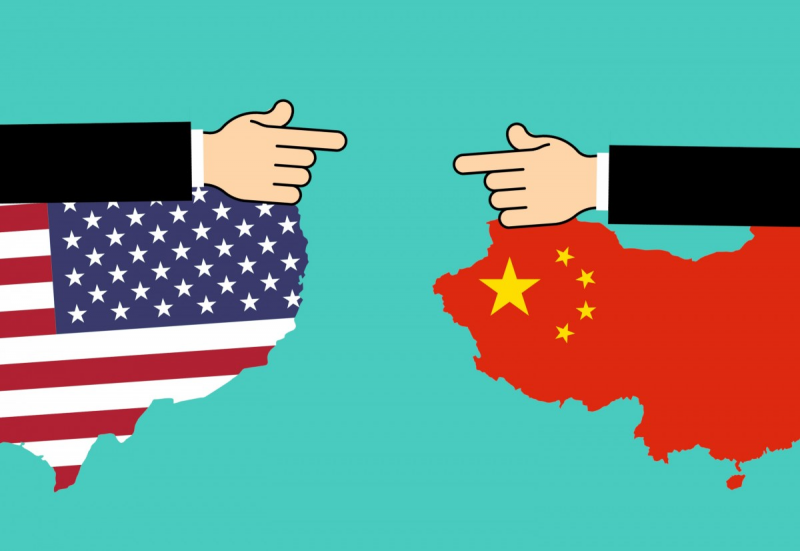 For several days now, in conversations with colleagues, I have to listen to an annoying joke about the fact that

"Americans are an ungrateful people and, despite the fact that we (Russia) have been fighting them for many years, we have chosen China as our main enemy."
It is clear that the legs of this joke are growing from a recent, on December 4, article by the head of American intelligence, John Ratcliffe, which was published in The Wall Street Journal.

To be honest, there are enough such materials in the American media today. The heads of various military departments, law enforcement agencies, military scientific institutions and other structures funded by the budget are thus trying to force the US government and parliament to increase the budget specifically for their organization or department. In general, the matter is quite common and even routine. Probably, there is not a single budgetary organization that would be completely satisfied with the amount of funds that the state allocates to it for the next financial year.

Of interest in this article is one important, but rather controversial statement by Ratcliffe, in which he called China the biggest threat to democracy in the world over the past 75 years. According to this statement, it turns out that after World War II, the United States fought the wrong enemy for many years? The confrontation between the USA and the USSR in this case was won by the PRC. And the leading world power during the Cold War was China, which “knocked their heads against” the former allies in the anti-Hitler coalition.

What John Ratcliffe told about on the pages of the magazine

Let's take a look at what the head of US intelligence writes about. Moreover, it is interesting not only in itself (the facts themselves), but also from the point of view of the American approach in determining the degree of danger of another state for the United States. I think this will be a revelation for some of our readers, although for political and military analysts this is already an axiom that has been known for a long time.

"If I could convey to the American people just one thought, using my exceptional position, it would be that the People's Republic of China today represents the most dangerous threat to America, the most dangerous threat to democracy and freedom around the world since World War II." ...
John Rastcliffe calls the main criterion for the danger of an adversary not ideological or political reasons, but economic ones. It is the economy that he brings to the first place in determining the degree of danger.

“China is determined to achieve economic, military and technological global dominance. The Celestial Empire implements the tactics of economic espionage: China steals technology from American companies, reproduces them at home, and then drives American players out of the market. "
An American intelligence officer calls an example of this approach

"The Chinese company Sinovel, which stole wind turbine technology from the American firm American Superconductor, whose shares fell sharply as a result."
This approach is typical for Americans. We should not forget about the task set before the director of the US National Intelligence Republican John Rastcliffe. He is a fairly experienced politician who has been in power since 2004 (mayor of Heath, Texas). He was twice elected to the US House of Representatives and perfectly represents the entire internal kitchen of the country's parliament, those who make decisions.

At the same time, the head of intelligence does not slip into specific examples, but speaks of a global threat to the United States. This is also significant enough. A senior executive cannot stoop to fight with any one company. Its level is a fight against the entire state at once.

“The US government estimates that the theft of intellectual property from China costs the US $ 500 billion annually.

At the same time, the PRC also steals important defense information, stimulating the plans of the head of China, Xi Jinping, to turn the Celestial Empire into the leading military power in the world.
The main idea, intended for those who sit in parliament and run big business, has been thrown in. There are only two theses that need to be illustrated. This is the "inhuman regime of the PRC" and the need not only to maintain, but also to increase the US National Intelligence. To substantiate such statements, there is always a magic phrase - "according to the American intelligence services." This is enough for "information to become reliable."

"China has been experimenting with soldiers in its army, trying to get biologically modified fighters."
“Chinese intelligence agencies use their access to firms like Huawei to improve their efficiency. The PRC's desire to dominate the 5G space underlies the desire to even more actively steal intellectual property and invade the personal space of users around the world. China is already launching massive cyber companies against the US. "
Further, I think, the line of thought of the head of intelligence is clear. It is necessary to strengthen, increase, concentrate, take measures to protect ... Simply put, it is necessary to add money to intelligence officers to successfully work against such a strong enemy as Beijing. By the way, in his article, Rastcliffe also claims the laurels of a world-class politician.

"Chinese leaders seek to subordinate individual freedoms to the will of the Communist Party."
“This is the challenge of our generation. The Americans have always shown their best side at the decisive moment, from the victory over fascism to the destruction of the Iron Curtain. "

In Beijing, as in Moscow, they have long since learned to read American documents in American. And they understand what is said "between the lines" in this article. It finally dawned on the Americans that the PRC today is superior to the United States in its defense capabilities in the land theater of operations. Yes, in the event of a military conflict, the Americans and their allies are quite capable of landing troops in any area of ​​the coast, but when moving inland, they are doomed to defeat.

"Dumb Asians who are only capable of doing mechanical assembly work"
led to a completely predictable outcome. Chinese companies today are on a par with American ones in many areas. That is, the United States is losing the main trump card of its influence on other countries - control over information. The same Huawei at the moment in many respects is the world's leading company in the field of electronic technologies.

The statement by the spokesman for the PRC Foreign Ministry, Hua Chunying, makes it clear that Beijing is aware of all of the above and understands the goals and objectives that the Americans will be solving in the next four years.

“Ratcliffe only continues to repeat lies and rumors in order to defame and discredit China and to unnecessarily exaggerate the Chinese threat. I think this is just another portion of the vinaigrette of false statements that the US government has been preparing recently. "
I was particularly struck by the directness of the Chinese Foreign Ministry in responding to US threats. It is clear that diplomats have their own specific language, their own slang, which for most ordinary people looks like quite a friendly conversation, despite the fact that in fact this is a real warning about a possible "fight".

“We hope that American politicians will respect the facts, stop creating and replicating fake news, stop fabricating and spreading political viruses and lies, and stop hurting US-China relations. Otherwise, they will only further damage the credibility of the United States. "

Is the USA starting a "cold war" against the PRC?

Today we have to admit that China is the only country that can actually withstand the power of the United States. This does not negate the danger for the Americans of the growing Russia, but China has nevertheless become the main enemy. If you look at the political movements of the United States lately, you get the impression that Washington really decided to start a "cold war".

I would not talk about this as a political trend for the coming years. I am much closer to the version of the "kitchen scandal" when Trump, offended by his loss, "pours salt into Biden's pot of soup." On the other hand, the Americans have already taken many steps that indicate precisely the beginning of the war. These are sanctions against Chinese politicians and leading Chinese companies, as well as the active creation of an anti-Chinese coalition in the region.

It is also alarming that American politicians are starting to talk more and more often about some kind of ideological confrontation between the United States and China. About the very "biorobots" and personal freedom, which were mentioned by the head of American intelligence. When people start talking about "human rights", about "democratic values", about the usurpation of power by any party or individual, one comes to the understanding that the dilemma is driven into a corner and there is no way out of it.

Understanding the essence of the events that are taking place in the world today makes it possible not only to predict the short-term future, but also to create this future in the near future. The confrontation between the United States and China was predictable. China's economic and military strength is undeniable today. In some areas, the PRC is stronger than the United States, in others it is weaker. But there is no other such country on the planet.

It would be ideal for the United States to bring these two countries together to govern the entire planet. It would be impossible to resist such an alliance. However, the habit of world domination and a unipolar world does not give American politicians the opportunity to even think about improving relations with the PRC. America needs an external enemy to fight against, without noticing internal problems.

Russia today has a unique chance to improve its relations with China. We have no ideological stoppers. There is no reason for any confrontation. But we have a common enemy that prevents us from developing. It is on this basis that our relations should be built.

If we manage to create a truly working alliance of Russia and China, then we will be able to resist the alliance of the United States and NATO as a whole.

And the fact that (due to changes in US foreign policy towards confrontation with the PRC) NATO's policy has also changed, we already see after the last summit of the alliance countries.