Military crossings: from Darius and Caesar to the present day 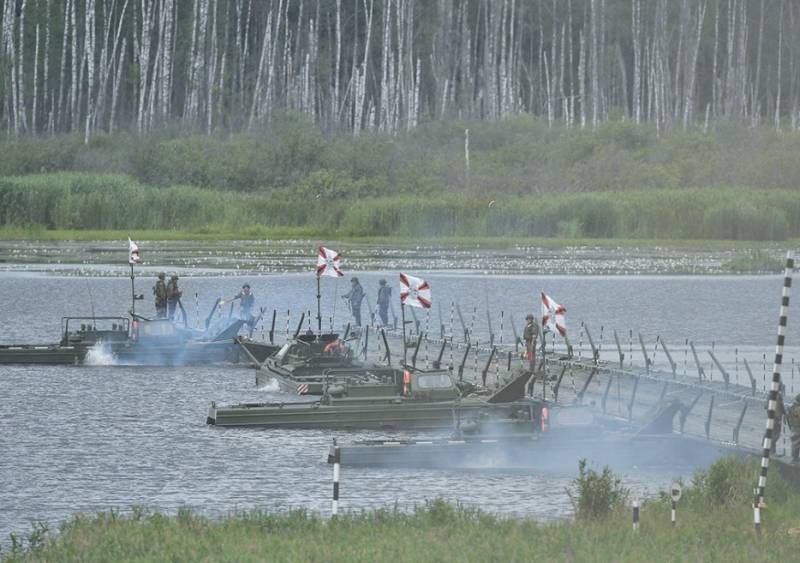 As you know, the main purpose of temporary bridges, erected in wartime, is to ensure that the troops overcome rivers, lakes and other obstacles on the way of their movement, maneuver, and evacuation.

One of the first such bridges in the world was described by the great historian Herodotus in his famous “Stories". Herodotus told the world how a temporary bridge was built across the Bosphorus. The Greek engineer Mandrocles, a native of the island of Samos, built a floating pontoon bridge on behalf of the Persian king Darius the First (552–485 BC). It connected the two shores of the Bosphorus at the narrowest point, where the width of the Bosphorus did not exceed 660 meters. Having crossed this bridge, the troops of Darius the First invaded Europe, pursuing the retreating Scythians.

Throwing a bridge across the multi-fish Bosporus, I dedicated
Hera picture this in memory of the bridge, Mandrocles.
The Samians gained fame, but only an honorable crown for myself,
Having accomplished the royal will, I pleased Darius.
- the inscription in the temple of Hera on Samos dedicated to those events.

The successor of Darius the First, Xerxes, having started a war against the Greek poleis, decided to organize the most ambitious temporary crossing of the Dardanelles at that time. The Persians were going to dock their ships fleet in such a way that a large army could cross them from one side of the strait to the other. However, nature intervened: the storm disrupted the plans of the all-powerful Achaemenid. Why Xerxes ordered to carve the sea, and the troops were forced to cross the strait in ships in the usual way.

The next impressive chapter in the history of military bridge building was opened by Gaius Julius Caesar. In 55 BC. e. Caesar, who was fighting the Gallic War at that time, ordered the construction of a wooden bridge over the Rhine River. Historians consider the most likely place for its construction to be a site 11 km below Bonn, where the river reaches 6 meters deep and 400 meters wide. The 400-meter wooden bridge across the Rhine was erected by Caesar's legionnaires in just ten days.

In the Middle Ages, the art of building military bridges in Europe fell into decay: fortress ditches were considered a very reliable obstacle for enemy troops, what can we say about wide and stormy rivers? Nevertheless, in modern times, the Dutch and the British began to actively master the practice of bridge building, and in the Peter's era, advanced technologies came to the Russian Empire.

In Russia, the art of bridge building has reached unprecedented heights. The advantages of domestic bridge building were most clearly manifested during the years of the Great Patriotic War, when Soviet troops had to build temporary bridges and crossings over rivers and even straits in the shortest possible time in order to facilitate the tasks of moving troops.

In 1943, German troops built a cable car across the Kerch Strait, through which up to a thousand tons of cargo per day was passed. When the Red Army liberated the Kerch Peninsula, the road began to be used in the interests of the Soviet troops, and then in 1944 the Soviet military built a temporary railway bridge across the Kerch Strait, its total length was more than 4,4 km. It was one of the most outstanding examples of Soviet bridge construction during the Great Patriotic War. Unfortunately, the bridge was destroyed in an accident with an icebreaker crashing into its supports.

Despite the development of air transport, the armed forces of Russia and other countries of the world today devote much attention to the operational construction of bridges. As soon as civilian bridges are destroyed, the military comes to the rescue: it is enough to recall the recent construction by the military of a temporary bridge near the village of Novolitovsk in Primorye. It was built by the efforts of the servicemen of the bridge battalion of the logistics brigade of the Eastern Military District.

Ctrl Enter
Noticed oshЫbku Highlight text and press. Ctrl + Enter
We are
About Stalin and KhrushchevList of destroyed the largest and most high-tech enterprises
Military Reviewin Yandex News
Military Reviewin Google News
23 comments
Information
Dear reader, to leave comments on the publication, you must sign in.