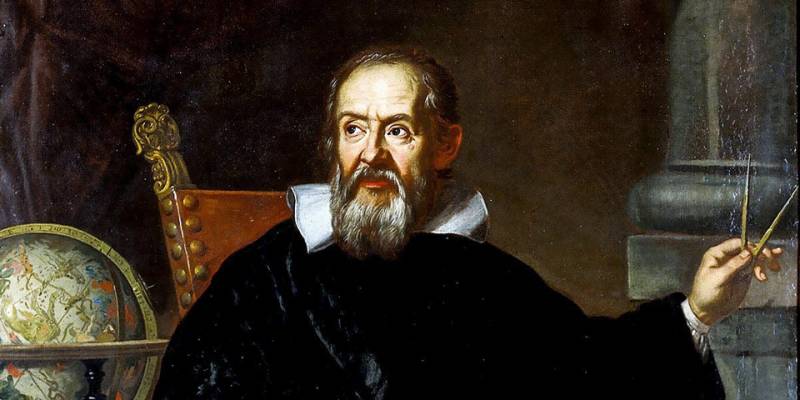 Galileo Galilei (1564 -1642) is considered the father of modern experimental science. He pioneered dynamics as the exact science of motion. With the help of a telescope, he demonstrated the validity of Copernicus's thesis about the movement of the Earth, which was denied by Aristotelian scientists and Roman Catholic theologians.

Not a medic, but a mathematician

Galileo was born in Pisa on February 15, 1564. He was the first of six children of Vincenzo Galilei, a Florentine merchant and musician (concurrently). At the age of eleven, he was sent to the Camaldolese School in Vallombrosa. And, if not for the resistance of his father, he would have become a monk. In 1581, Galileo entered the University of Pisa to pursue a medical degree, but he soon developed a much greater interest in mathematics.

The father, who was very reluctant, agreed to let his son leave medicine. Having dropped out of the university and left without a degree, Galileo led a miserable existence from 1585 to 1589. During this period, he published his first book, Little Balance, inspired by the research of the mathematician Archimedes. It described hydrostatic equilibrium, which he invented to measure the specific gravity of objects.

In 1589, on the recommendation of the German Jesuit mathematician Christopher Clavius ​​and thanks to the fame he had gained for his lectures at the Florentine Academy, Galileo was assigned to the University of Pisa. There, for the next three years he taught mathematics based on Aristotelian and Ptolemaic theories.

In 1592, Galileo received a more prestigious position at the University of Padua in the Venetian Republic. These eighteen years in Padua, where he taught Euclidean geometry and Ptolemy's astronomy, were the happiest in his life.

Galileo began researching Copernicus' theory of Earth's motion in the early 1590s. In a letter to Johannes Kepler in 1597, he admitted that for many years he was a supporter of Copernicism, but the fear of ridicule prevented him from openly expressing his views. However, in 1604, Galileo began to lecture exposing the contradictions of Aristotle's astronomy. At about the same time, he resumed his earlier studies of movement. And he came to the ingenious conclusion that objects fall at the same speed, regardless of weight.

In 1609, Galileo personally perfected the telescope (invented as a telescope by a Dutch optician) and used it to point out the fallacy of the heliocentric theory. In his works on astronomy, he described the mountains of the moon and the moons of Jupiter. To flatter Cosimo II, the Grand Duke of Tuscany, Galileo dedicated a book to him in the hope that an important appointment to Florence would follow. He was not disappointed: Cosimo called him "the chief mathematician and philosopher."

Soon after the publication in 1612-1613 of his discourse on falling bodies and sunspots, Galileo entered into a public discussion about the relationship between Copernicus's thesis on the movement of the Earth and the scriptures that supported Ptolemaic geocentric theory (the Earth is stationary).

Ban on talking about the movement of the Earth

In 1616, the Holy Inquisition unequivocally condemned Copernicus's theory. Cardinal Robert Bellarmine (Jesuit theologian and adviser to the pope) was instructed to personally inform Galileo that he was forbidden to teach or defend Copernicus's teachings orally or in writing. But he, apparently, understood this prohibition in his own way. Galileo decided that it was possible to continue discussing Copernican ideas as mathematical constructions, and not as philosophical truth (which was prohibited). Therefore, he carried on extensive correspondence on this topic with his supporters throughout Europe.

In 1623, Cardinal Maffeo Barberini (an old friend of Galileo and a renowned patron of the arts) was elected pope, taking the name Urban VIII. Barberini, like the Pope, was much less hostile to Copernicus than the cardinal. During an audience with Galileo, Urban made it clear that

“God is almighty, and talk about Copernicism (about the movement of the earth), as something other than hypothetical, means to deny divine omnipotence. "
Between 1624 and 1630, Galileo wrote a book "Dialogue on the two main systems of the world: Ptolemaic and Copernicus." This work was condemned by the religious authorities.

The dialogue was published in Florence in 1632. The book of Galileo - a scientist of the Renaissance - presents his bold ideas as an astronomer, physicist and humanist.

It is written in the form of a dispute between three philosophers, one of whom skillfully defended Copernicus's ideas about the movement of the Earth around the Sun, the other acted as a mediator, and the third ineptly supported Ptolemy's thesis about the immobility of the Earth, which is located in the center of the world. Written in Italian in a popular style, the book quickly attracted a wide readership.

Flame of the Inquisition

The Catholic leadership ordered Galileo to appear in Rome on “suspicion of heresy” (distribution of a book about the movement of the Earth). His trial, which began in April 1633, ended a few months later, when the Inquisition recognized him not as a heretic, but as "strongly suspected of heresy." This condemnation was mainly based on the fact that he did not comply with the injunction of the Inquisition of 1616 (prohibition of statements about the movement of the Earth). For reasons that still remain unclear, Galileo signed the abdication. He was sentenced to imprisonment and to read penitential psalms once a week for three years. The sentence was subsequently commuted to house arrest in Archetri.

Galileo spent the rest of his life in relative seclusion, suffering from poor health and blindness. Nevertheless, he managed to publish in Holland in 1638 his reasoning and mathematical proofs concerning two new sciences, in which he developed his ideas about the acceleration of bodies in free fall. He died on January 8, 1642, and was buried in the church of Santa Croce.

And yet she turns

In 1979, Pope John Paul II reopened the Galileo case. In 1992, on the basis of the report of the commission of inquiry, he declared that theologians were mistaken in condemning Galileo. Thus, almost four hundred years after his conviction, Galileo was acquitted.