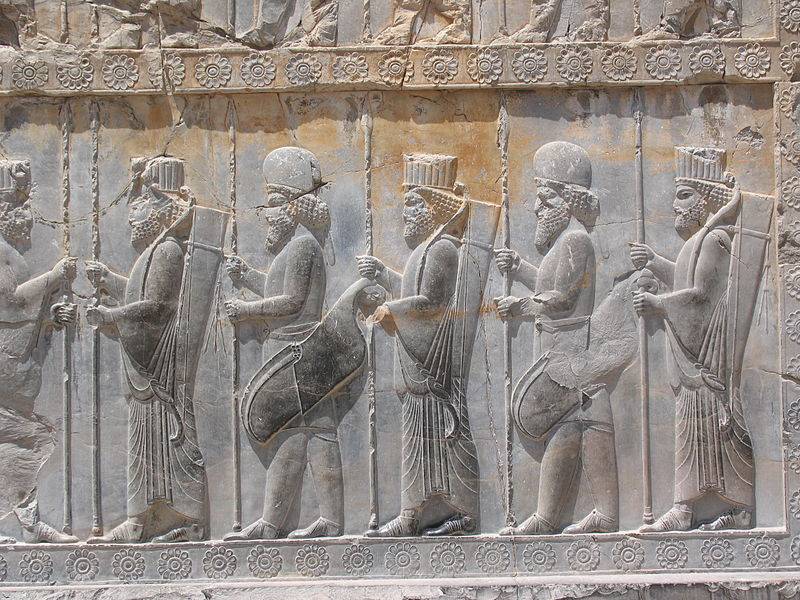 “In the first year of Cyrus, king of Persia, in fulfillment of the word of the Lord from the mouth of Jeremiah, the Lord aroused the spirit of Cyrus, king of Persia, and he commanded to declare throughout his kingdom, verbally and in writing: thus says Cyrus, king of Persia: all the kingdoms of the earth he gave me The Lord God is heavenly, and He commanded me to build Him a house in Jerusalem, which is in Judea "
(First Book of Ezra, 1: 1, 1: 2)
Culture of clothes. Among thematic cycles of VO история clothing is quite popular, especially among our lovely women, who are not so many on the site, but who, nevertheless, are there and, it happens, remind me to continue writing articles on this topic. Well - why not, especially since any clothing in a certain sense is always in one way or another associated with military uniform, and military uniform is, of course, a topic for the military. Today we will get acquainted with the mods of the ancient Persian empire - almost the first empire on the territory of Eurasia, created by Tsar Cyrus, who received the honorary nickname of the Great for this.

It was the greatest kingdom that Western Asia has ever known, and spread over the entire territory of former Assyria, the lands of Asia Minor, Egypt, southern Central Asia, as well as the territories of modern Pakistan, Afghanistan and northern India. It is clear that the unification of such a huge number of peoples in its mass could not but lead to an intensive cultural exchange and interpenetration of different cultures, including such an area as the culture of clothing. Although the actual Persian clothing culture was formed in the area of ​​Mesopotamia. Herodotus also testifies to the fact of the multiculturalism of the Persian civilization, who wrote that no nation was so susceptible to the influence of other people's mores and customs as the Persians. Moreover, the Persian state has absorbed the cultures of very ancient countries, which have been formed over many millennia. Therefore, it is not surprising that the clothes of the Persians intertwined in the most bizarre way the clothes of the Babylonians, Assyrians, Phrygians, Lydians, Scythians, Sarmatians and even Indians. 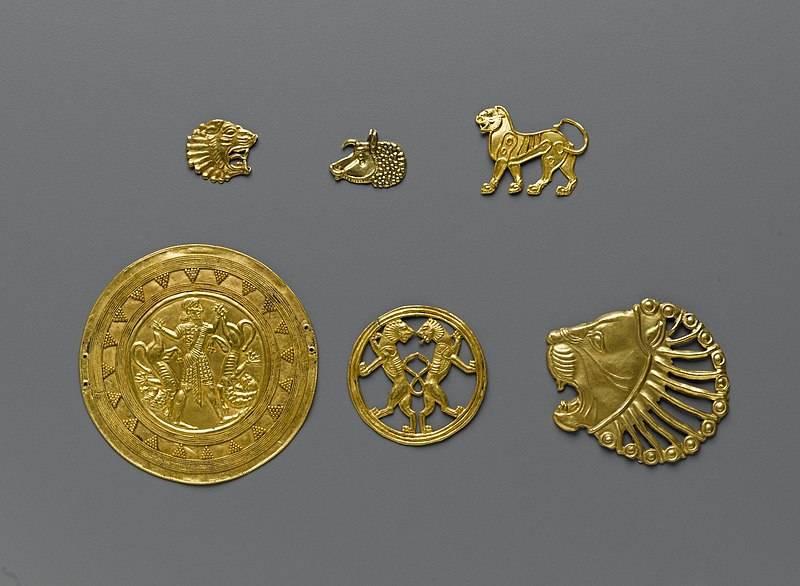 The Persians loved gold jewelry. For example, there are gold plaques that they sewed on clothes. VI-V centuries. BC. The era of the Achaemenids. (0.1 x 4.2 cm). (Brooklyn Museum)

Silk clothes as an indicator of social status

We know about the ancient Persian costume thanks to the monuments of Pasargadae, the first capital of the Achaemenid empire, which have survived to our time, and Persepolis, the later capital of the Persian state, founded in 521 BC. King Darius I. It consisted primarily of long wide trousers, soft shoes with leather ties and a caftan with an oblique collar. The Babylonians borrow a long, spacious shirt with wide sleeves, belted at the waist, but widening downward. Under Cyrus, at court, the fashion for Median clothing, primarily made of silk, spread. Silk is so prized that clothing made from it is rewarded for service, while commoners are prohibited from wearing it. However, their clothes are also improving: for example, leather clothes, traditional for the common people, are replaced by woolen ones, and tight-fitting leather pants (the Persians called them anaxarids, and they were originally sewn with fur inside) are replaced by woolen trousers. 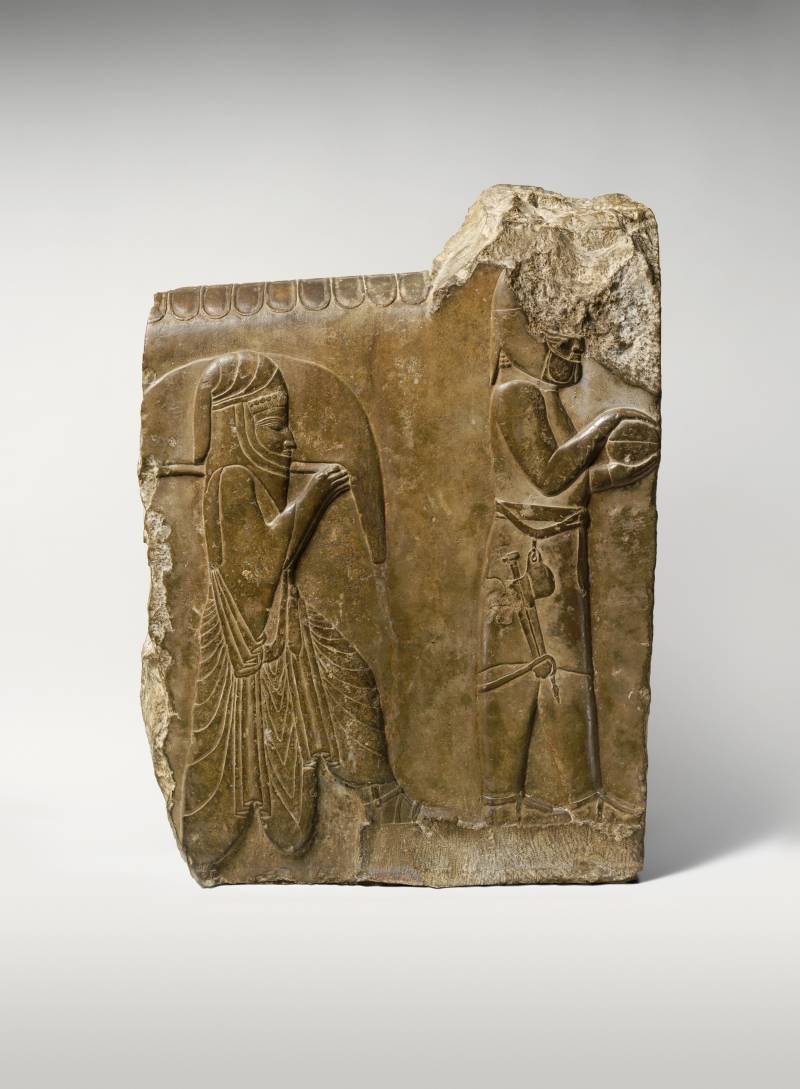 Persians in wide (left) and narrow (right) pants and with hoods on their head. The dagger on the thigh of the Persian on the right has a "winged scabbard" characteristic of the Scythian culture, supported in the required position by two straps. (Metropolitan Museum of Art, New York)
The Tsar's caftan was trimmed in front in full length with a wide white stripe, which was a symbol of royal power, the bottom of the caftan was decorated with a precious border. The golden decoration of the royal costume contained images of birds - symbols of the highest deity of Ormuzd - hawks and falcons. Precious bracelets and necklaces complemented the luxurious royal look.

The outer clothing of the Persian nobility was made of thin silk or woolen fabrics, mainly of dark red color, and consisted of a long-length caftan, pants and a cape. The sleeves of the caftan were so wide that they showed off their contrasting color lining. A long silk undershirt with a beautiful finish was always worn under the caftan. 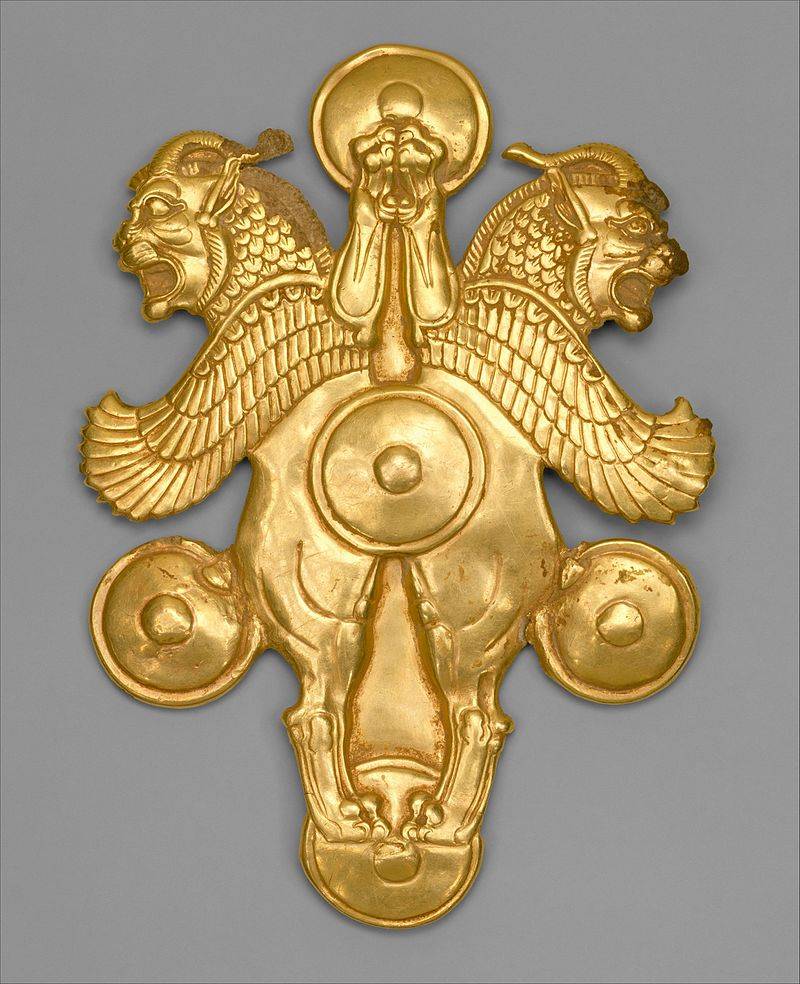 But it was simply impossible to portray women!

On ancient Persian bas-reliefs, there are no images of women, since there was a strict ban on their appearance outside the house, as well as on the image of female figures. Therefore, how Persian women's clothing looked like, we can only judge by analogy with a men's suit. She also presumably wore features of Median and earlier Assyrian clothing. That is, the underwear was a shirt with long and narrow sleeves, which were trimmed with a border. The outer garment was a man's caftan. Most likely, veils and capes, traditional in the East, embroidered with patterns were widespread. It was known about the wives of the kings that they wore rich purple robes, all embroidered with gold.

Headdresses were felt hats in the form of a cap, and often with headphones and a back piece. Nobles used headbands, but only the king could wear a tiara - a headdress in the form of a cylinder, expanding upward and decorated with gold and precious stones. By the way, this is exactly the kind of dress that Shah Kavus wears on his head in the film "The Tale of Rustam" (1971), although there they cost only gold. Moreover, it is interesting that the Persian kings borrowed the tiara from the Assyrians, and their own headdress was a tiara on the contrary - in the form of a truncated cone with a golden symbol of the sun in front. Another dress - kidaris, is interesting in that it had the shape of a common people's cap, but was entwined either with a red-white or white-blue ribbon, which were symbols of royal power. 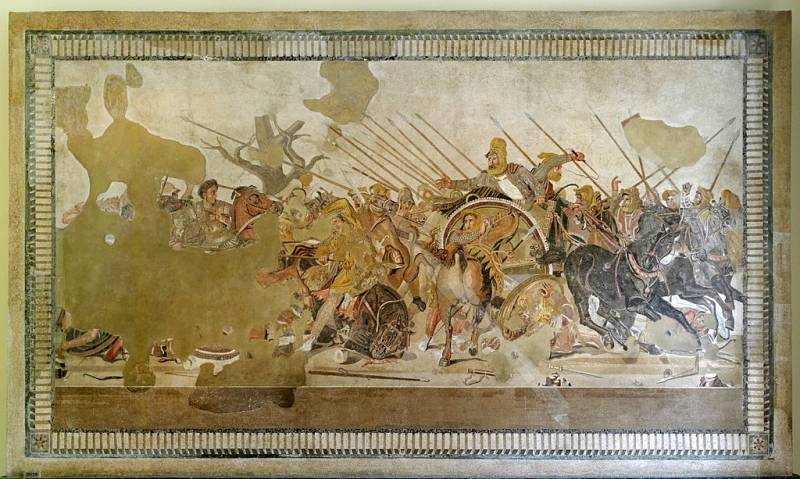 Battle of Alexander the Great with the Persian king Darius III. Pompeian fresco. It is interesting that the head of Darius, standing on a chariot, is wrapped in some kind of burnous, but under it there is clearly a conical tiara. (Naples Archaeological Museum)

The beard played a special role in the appearance of the Persian man. The king was simply obliged to have a long beard, decorated with curls, and his courtiers - beards not so significant, which also had to be carefully trimmed and curled. Those who were deprived of this decoration by nature, wore false beards. A Persian king without a beard, bald, and even with a ring in his nose, as I happened to see in the video of some "historical film" - the same nonsense as a primitive man wearing a baseball cap and jeans!

It should be noted that during the Sassanid era (224-651 AD), the Persian costume remained practically unchanged, but became extremely rich and vibrant. The patterns on clothes at this time become extremely diverse, depict flowers, animals, and all this is intertwined with each other in a completely fantastic way. Gold-woven brocade is widely used, clothes are trimmed with pearls, since the Persian Gulf and the Arabian Sea, where it was then mined, are very close. 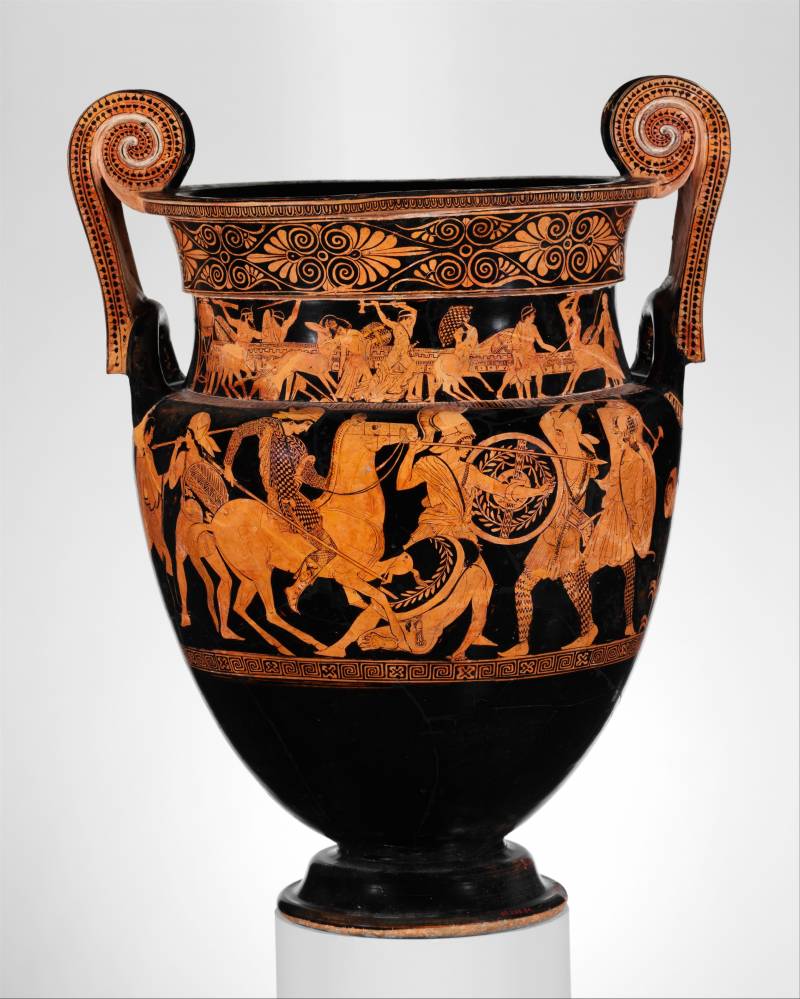 Greek crater (bowl for mixing wine and water), approx. 450 BC e. Depicts the Amazonomachy (battle between Greeks and Amazons). The ancient Greeks almost never depicted modern or historical events in art. And although they understood the scale of their victory in the Greco-Persian wars, nevertheless, their artists did not seek to depict their events directly. Instead, they painted their vessels with images of the great mythological battles between Greeks and Eastern peoples, especially the Amazons. The Amazons were a mythical race of female warriors whose homeland lay far to the east and north. However, they portrayed the same Amazons, dressed exactly like the Persians. (Metropolitan Museum of Art, New York)

The main feature is armor made of metal scales ...

As for the military clothing of the Persians, it is known both from the wall bas-reliefs and from the images on Greek ceramic dishes. The king's bodyguards are the so-called "immortals", because there were always ten thousand of them, they wear tiaras similar to the king's, and long-length caftans, and they are armed with spears and bows with arrows, which they carry in closed quivers. 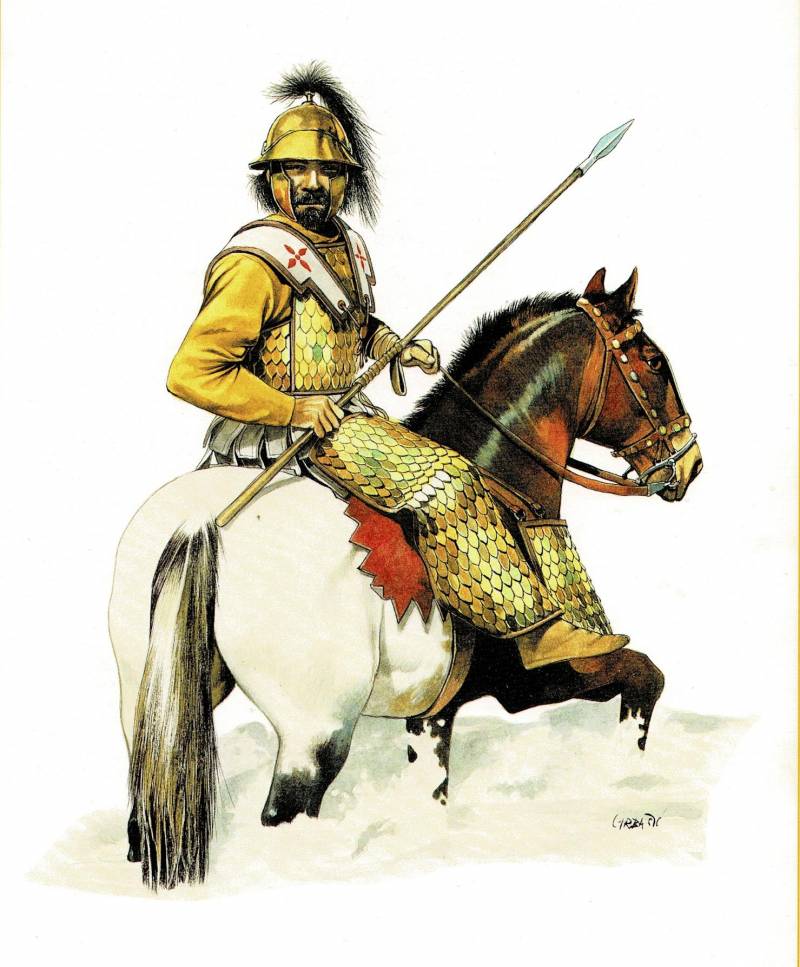 Persian heavily armed horseman in scaled armor IV century. BC e. Figure: from the book: V. Vuksic, Z. Grbasic. Cavalry. The history of fighting elite 650BC - AD1914. L .: Cassell, 1994. P.43
All ancient authors unanimously claim that the Persians were strong in their cavalry, which was both light - horse arrows from a bow, and heavy, armed with long spears. Heavily armed riders had shells made of metal plates, including over the trousers, or their horses were covered with the same shells, and their head was protected by metal foreheads. Solid forged armor like the Greek was not used. On the other hand, armor made of copper, bronze and iron scales sewn onto a leather base was very widely used - a type of armor that is characteristic, first of all, for equestrian archers! The swords were straight but short. They were worn either tucked into a belt or in a sheath on the thigh, secured with straps. Shields - woven from twigs and reinforced with leather. Helmets, most often leather, or of intersecting metal stripes, did not cover the face, since the archer needed a good view. In general, the equipment of the Persian warriors was thoughtful and convenient, but designed for ranged combat. In close combat, the same Greeks in their closed helmets, breastplates-thoraxes and with shields-hoplons had a clear advantage over them. 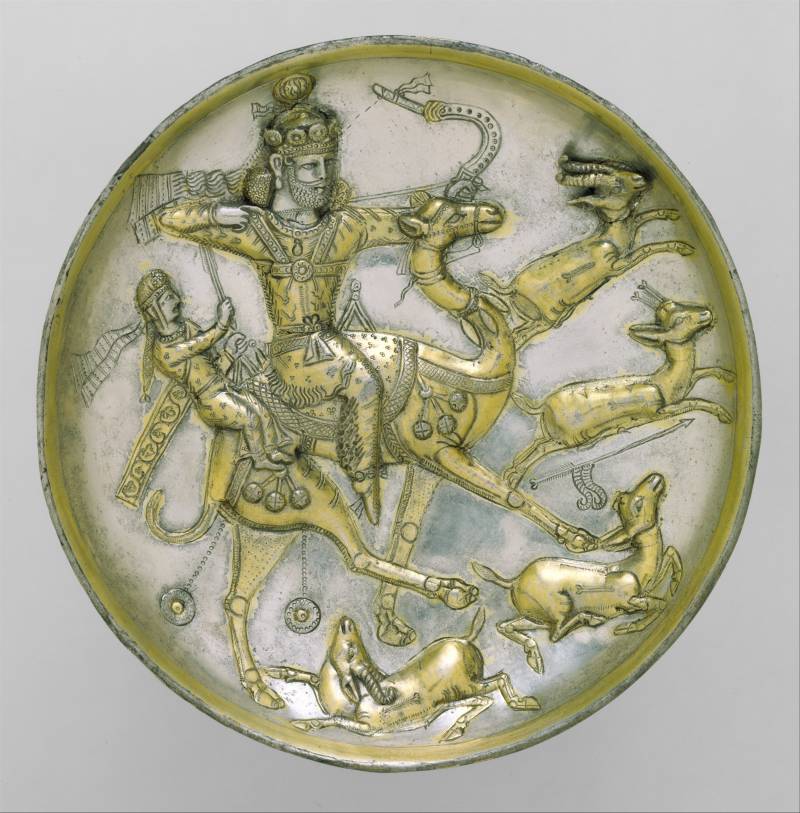 Persian king on the hunt. OK. 420th century AD e. The images on this plate represent the earliest known image of a well-known episode from the history of Bahram Gur or Bahram V (reigns 438-XNUMX), recorded by Firdausi in the Shahnama or Book of Kings at the beginning of the XNUMXth century AD, that is, centuries later after this plate was made. A large number of gold and silver vessels have survived from the Sassanid rule in Iran and Mesopotamia, which shows an ancient Middle Eastern tradition that spread westward during the Hellenistic and Roman periods, when vessels of precious metals became symbols of power and prestige. Presumably, these were official state products, which were presented as royal gifts to influential persons both in Sassanian Iran itself and abroad. In this case, it is also valuable in that the tsar's outfit is visible in detail on it. The dish is made of silver and gilded on the basis of mercury amalgam. (Metropolitan Museum of Art, New York)
PS To see how the Persians of the era of the Greco-Persian wars dressed, it is best to watch the movie Three Hundred Spartans (1962). Something, but the clothes of the Persians are reproduced in it extremely authentically ...