Amateur: "The concept of the Russian Navy"

November 21 2020
207
I must say right away that this article is my first. It represents a "civilian" view of the concept of building the Navy. However, this is also its main advantage. Since a "military" person can not always see the benefits of "civilian thinking". And they can also be. Perhaps knowledgeable people will be able to learn or use some rational ideas. Before commenting, please read to the end. 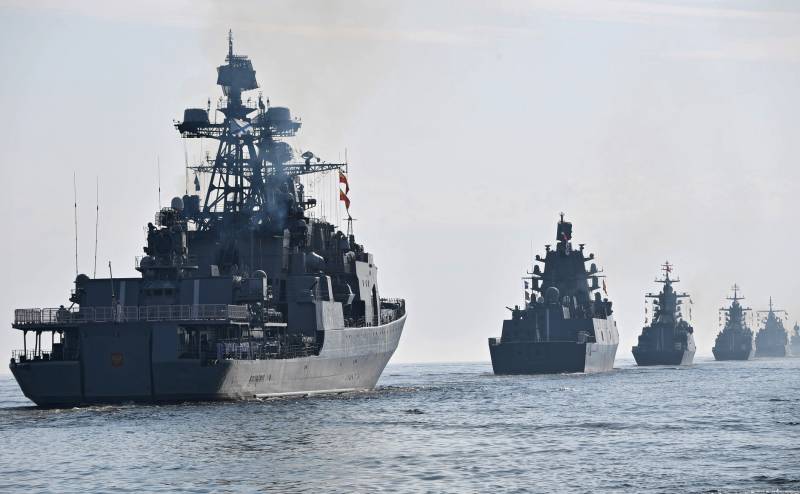 When creating my concept, I was guided by the following introductory notes, which I consider objective without any jingoistic patriotism and fantastic assumptions.

1. The Russian economy is unable at the present time and in the foreseeable future to ensure the maintenance of powerful naval forces in all strategic directions comparable to the US Navy and even more so to NATO as a bloc.

2. The length of Russia's maritime borders does not make it possible to repel the naval threat equally effectively in all strategic directions simultaneously.

3. The general concept of naval fleet remains uncertain. Many different ships are being created that solve the same problems. However, they are made by different contractors, have different weapons, appearance and unequal capabilities. That is why ꟷ is such a “zoo” that has not yet been brought to a common denominator.

Which navy for today's Russia do I consider ideal and most effective?

1. The fleet must have a unified nomenclature of ship models, weapons and service regulations. (Now we have and continue to create a "zoo": frigates, corvettes, cruisers of 2-3 different models at the same time, different capabilities, appearance and tasks, which increases the cost of production, since the series is small and makes maintenance unprofitable and complicates management). This situation makes naval construction economically ineffective and causes great damage to the fleet.

2. The fleet should abandon the division into regions: Black Sea, Baltic, Northern, Caspian, Pacific. Let me explain. The principle of creating a fleet should be the following:


"You can't be strong everywhere, but you have to be very strong somewhere."

That is, all of the above fleets are reduced as much as possible to the levels of combat training formations designed for training personnel and patrolling the border. Except for the Caspian Sea because of its isolation, but there is generally no need for a large fleet. The released units form one "strike" fleet and one "strategic" fleet.

As a result, the "strike" fleet turns out to be powerful and compact (it can be created now). And for this you do not need to have a very large number of ships.

The most combat-ready and most modern ships (in the amount of 50-70) can be concentrated in a single unit. Such a fleet will be able to solve any problem anywhere in the world and will be a serious argument wherever it appears.

The fleet will operate on the principle of periodic movement from one theater to another. This will simultaneously be carried out in the format of military exercises, scenarios can always be thought of. One definite period "strike fleet" ꟷ in the Atlantic, another ꟷ in the Pacific, the third ꟷ in the Mediterranean. And so in a circle ꟷ constantly.

Pros. I see the advantages of this approach in the fact that a strong fleet can be created now. It is economically beneficial and affordable for the country's economy. Will increase the prestige and capabilities of the fleet in the world. It will allow sailors to study all theaters of military operations and constantly have a high level of training. It will provide a constant level of "coherence" and interaction of the crews, since they will constantly be part of a single powerful unit, analyze mistakes, experience and successful actions.

Минусы. The disadvantages of this approach are that we will expose those areas where the "strike" fleet will be absent at this time. However, is this a disadvantage? If we proceed from the premise that it is impossible to create an efficient fleet in all directions at the same time? I don't think so. This is an acceptable risk in our circumstances. The defense of other areas at this time, I think, should be addressed with the help of coastal defense and the Air Force.

Also, the conditional disadvantages include the increased wear and tear of ships, since the transitions with our borders from one region to another will be over great distances. However, can this be considered a disadvantage? The fleet moves, trains, constantly studies new theaters of military operations. That is, he works, but naturally you have to pay for the work.

Another disadvantage is that different ships are needed for different seas ("warm" / "cold"). But if it can somehow be unified, then it will no longer be a minus. If not, ꟷ you need to understand how risky it is for the resource of ships. (I can't comment here already). The risk just needs to be properly assessed by specialists.

This fleet will include strategic missile carriers and the necessary list of other naval vessels, the task of which will be only one thing: to cover the deployment of strategic submarines and to ensure the possibility of a nuclear retaliatory strike by them.

That is, this is a fleet that will, roughly speaking, be assigned to Russia's nuclear triad.

Pros. The advantages are the same.

Минусы. And the disadvantages are already fewer. Since having strategic missile carriers in the entire world ocean at the same time probably does not make much sense. It is enough to hide them either in the Atlantic or in the Pacific Ocean. And go find them all there at the same time.

3. The third component of the "ideal fleet". At the moment when the "Strike" or "Strategic" fleet is in a particular region, the Air Force, as well as the air defense and ground forces of the corresponding region of our country, join its work. Work out the interaction. And they also conduct exercises (to repel the landing of a potential enemy, or others).

The rest of the time, the Air Force, Air Defense and Ground Forces solve their tasks as part of their current training.

This approach makes it possible to create a strong and permanently high combat capability of the naval formation already now. And also to maintain it at the proper material level without a significant increase in the military budget and the cost of naval construction.

Of course, there are disadvantages to my concept. Perhaps there is a lot I have left out. Please join the discussion in the comments. Especially those with experience of service or command in the Navy. It will be interesting to hear a competent opinion.

Ctrl Enter
Noticed oshЫbku Highlight text and press. Ctrl + Enter
We are
About Stalin and KhrushchevWhat you didn't want to know about England
207 comments
Information
Dear reader, to leave comments on the publication, you must to register.