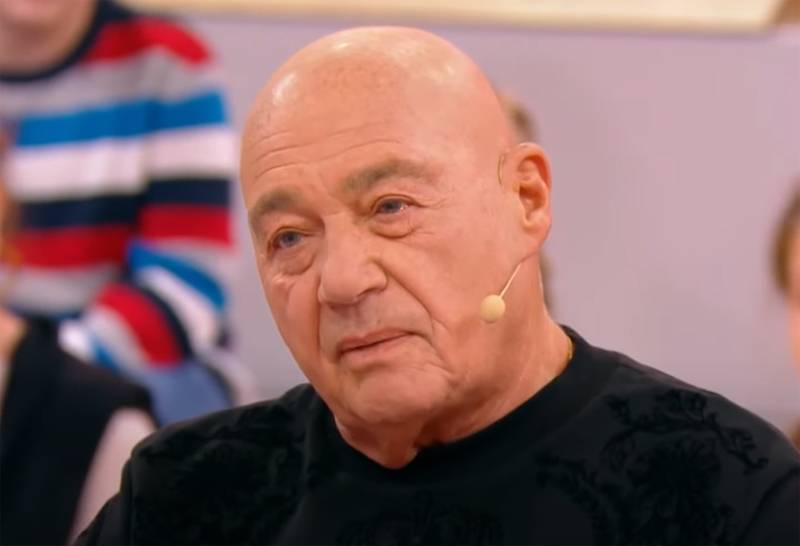 Posner declared about the "fascist features" of the USSR. This is a typical manifestation of a Westernizer who has been throwing mud at Soviet civilization for three decades and is introducing "universal" values ​​in Russia.


Interestingly, Vladimir Pozner, being a Soviet journalist, actively justified the policy of the USSR, including the introduction of troops into Afghanistan. However, after the collapse of the USSR, he quickly changed his color and became a singer of Western values. Posner himself in 2009 in an interview with Moskovsky Komsomolets admitted:

In Russia, only my job keeps me going. I am not a Russian person, this is not my homeland, I did not grow up here, I do not feel completely at home here - and I suffer a lot from this. I feel like a stranger in Russia.
This is an open westerner, whom the Russian writer Mikhail Zadornov called "a genius traitor." He works in Russia and uses our own funds to conduct enemy propaganda.

On the "totalitarianism" of the USSR

The Soviet Union was not a totalitarian state in the Western sense. Or the "evil empire." One of the methods of information warfare, when white is declared black and vice versa. For example, the greatest rulers of Russia, who solved the most important national tasks and brought the maximum benefit to the Russian state and people - Ivan the Terrible and Joseph Stalin. But in the West they created images of “bloody tyrants”, killer-ghouls. Pro-Western Russian activists have painted a corresponding picture in Russia itself. But the people at the subconscious level understand that they are being deceived. For the majority of Russian people, Ivan Vasilyevich and Stalin are their own people, great leaders who fought with the internal and external enemies of Russia-Russia. Hence the furious hatred of all Westerners towards them.

The real homeland of fascism, Nazism, racism and totalitarianism is Europe (the Western world as a whole). Fascism and Nazism, authoritarianism and totalitarianism were the responses of the Western world to the then crisis of capitalism. The Western world tried to create a "concentration camp" within the countries and direct the hatred of disadvantaged people outside, towards expansion and aggression. This is what caused a series of violent conflicts and wars. Second World War. The Soviet Union, on the contrary, avoided the crisis and moved forward quickly. To the future, to the stars. Therefore, the West gathered an all-European horde led by Hitler and launched another invasion of the East. However, the more spiritual, developed and advanced Soviet system gave a powerful rebuff and extended its borders to a significant part of Europe (including Poland and East Germany - the long-standing strongholds of Western civilization in the struggle against Russia). Soviet (Russian) civilization has become a beacon, a bulwark of good and justice for all mankind. The Russians were followed by the Chinese, Koreans, Vietnamese, Cubans and many other peoples.

It is difficult to find more totalitarian, Nazi and fascist states than the capitalist countries of the West. Russia, and then the USSR was called the "prison of peoples". But the West can be called a "cemetery of peoples." First, Rome destroyed the Slavic Russian civilization in central Europe ("Slavic Atlantis" in Central Europe), crushed the Celtic world. The West tried to break through to the East and South - crusades against Muslims and Slavs. But due to spiritual, cultural weakness, he could not achieve great success. Then the time came for the "Great Geographical Discoveries". The Western world conquered, enslaved and plundered most of America, Africa, Asia and the islands of the Atlantic, Indian and Pacific Oceans (Western prosperity was laid by the slave and drug trade; How the West enslaved the planet). Tens of millions of people around the planet were exterminated, tortured, sold into slavery. They were turned into drug addicts and slaves of the capitalist (slave-owning) moloch.

British racism, Italian fascism and Hitlerite Nazism were born of the Western world. Concentration camps, mass genocide, the division of people into "chosen" and "subhuman". The West has created the illusion of "democracy". Although, in fact, power in European countries and the United States belongs either to the old aristocracy or the financial oligarchy. All mayors, governors, deputies, senators and presidents only represent their interests. Exceptions are very rare. Like the last great Frenchman de Gaulle. There are more people behind bars in the "free" States than in the "totalitarian" Union.

The USSR was one of the freest countries in the world. It is clear that the Union was not an ideal country, there were none and there are none. However, if you can compare the general level of security, education and health care of the Soviet Union and the current Western countries, or the Russian Federation, where almost all systems and institutions were copied from the West, then the Soviet civilization looks much better. Many still remember that in the Soviet Union, children could safely walk all day long. That there were keys under the rugs or on the stud above the door. That schools and kindergartens were not closed with ugly fences, cameras were not installed, schoolchildren were not searched before exams. The stations were not closed on all sides with fences and bars, with a bunch of guards. And so it is everywhere. The whole country is a zone of "prison romanticism". Now also rivers, lakes, forests are becoming "private". Taxes will be requested shortly for picking mushrooms and berries. Soviet people lived more freely and at ease.

The Supreme Soviet of the USSR (the highest representative and legislative body of the USSR) is an excellent example of Soviet democracy. The best people of the country were gathered there, the real elite - workers, outstanding scientists and teachers, the military, etc. Moreover, most of the time they served or worked for the good of the country. They served in the ranks of the Soviet Army, were workers and collective farmers, teachers and doctors, scientists and inventors. Its members met twice a year to solve the most important problems, to pass laws. They were not drones like the current deputies who, out of idleness and in the course of imitation of violent activity, come up with idiotic bills. As well as officials similar to them in status. In particular, proposals have been voiced more than once to introduce lessons in information security and financial literacy, sex education, sobriety, healthy lifestyles, e-sports, traffic rules, ecology, etc., in schools. This is against the background of the total degradation of traditional mathematics, chemistry, Russian language, stories and geography.

In today's capitalist Russia (the periphery of the capitalist metropolis), the owners of enterprises, school directors, rectors, chief doctors, etc. have become a kind of lower layer of the new feudal lords. They are subject to financial flows. No one can object to them, otherwise they will be left without work, sources of livelihood, with a "wolf ticket". Everything was different in the USSR. Grassroots democracy existed in labor collectives and the organs of Soviet power. Any chief could be complained about, and an appropriate investigation was carried out. It was a genuine people's democracy.

Thus, only a Westerner who hates everything Russian and Soviet can see fascism in the USSR. For which America and Europe come first. And Russia is a “country of barbarians”, a fragment of the Soviet “empire of evil”, where the “scoop” (including Russianness) has not yet been completely eradicated.

Now the veil of lies hides from people the truth about the USSR, entangling them with numerous black myths. Numerous TV programs, historians and journalists such as Mlechin and Pozner have inspired and still inspire people that the USSR was an ignorant country, with science and technology hopelessly lagging behind the world. That Union was an ugly and unsuccessful social experiment on people. A country created by the German spy Lenin, where the executioner Stalin drove tens (or even hundreds) of millions of people into the camps. That in the USSR small peoples were destroyed, and communism was no different from Hitler's Nazism. That the USSR was a country of semi-literate slaves (scoops). That the tyrant Stalin, the executioner Beria and the war criminal Zhukov "overwhelmed" the Germans with corpses and only thus won the war. In the USSR, any freedom was suppressed, where people did not laugh, dressed badly and gray, and spent all the time outside of work in lines.

In reality, then Russia was a superpower and pursued global politics. Industrialization made the USSR a leading industrial power, producing literally everything from nails to spaceships. In the 1980s, the Union was among the world leaders in robotics and machine tool building. Our culture and education were the best in the world. The state of Lomonosov, Pushkin, Pirogov, Sechenov, Tolstoy, Tsiolkovsky and Korolev. Nowadays Russia is a "gas station country", a supplier of raw materials, cultural and resource periphery of the West and East.

Soviet (Russian) civilization was the world of the future, facing the stars. To understand this, it is enough to ask the question: “Was there a period or society in world history when all people in any country lived like people, humanly? According to the principles of freedom, brotherhood, kindness, justice, conscience and love. " The honest answer is no! Another question: “Was there a period in world history when a lot of people, an entire civilization, a huge power, not in dreams, but in political reality, lived to the greatest extent as people, humanly? It was a community (commune) of people, conciliar and united, living according to the laws of justice, brotherhood and help to one's neighbor. The society, which was becoming kinder and more generous to its members, took care that each new generation of people became more developed, more educated, more cultured and happier. " The only direct and honest answer is the Soviet Union under Stalin's rule. By inertia - the period of Khrushchev and even the late Brezhnev.

Soviet people lived full, eventful lives, with faith in a bright future. Confident in the security of the country. To this day, the heroes of the Great Patriotic War, Soviet scientists and creators, cosmonauts and athletes are the best people of our civilization. Genuine specimens of humanity. And Soviet films and cartoons are full of real human values, meanings, in contrast to the current trash heap. People then were masters of their country, now there are “masters” of people.

Thus, the Soviet society - in contrast to the current slave-owning (consumer) capitalist society - provided the common man with previously unprecedented freedom, social justice and confidence in the future. Soviet society had a huge potential for creation and improvement. It is not lost even now. It is obvious that simple copying of the USSR is pointless, but the best developments of socialism in the form of socialization of property, state planning and control, true democracy (councils), solidarity and communality, social justice and brotherhood of peoples, the foundations of education, health care and mass physical culture are necessary to preserve Russia and people.

Ctrl Enter
Noticed oshЫbku Highlight text and press. Ctrl + Enter
We are
A great interview with Sergey Lavrov: about Ukraine, Obama and IranWhat you didn't want to know about England
379 comments
Information
Dear reader, to leave comments on the publication, you must to register.