Now - the blockade of Karabakh? 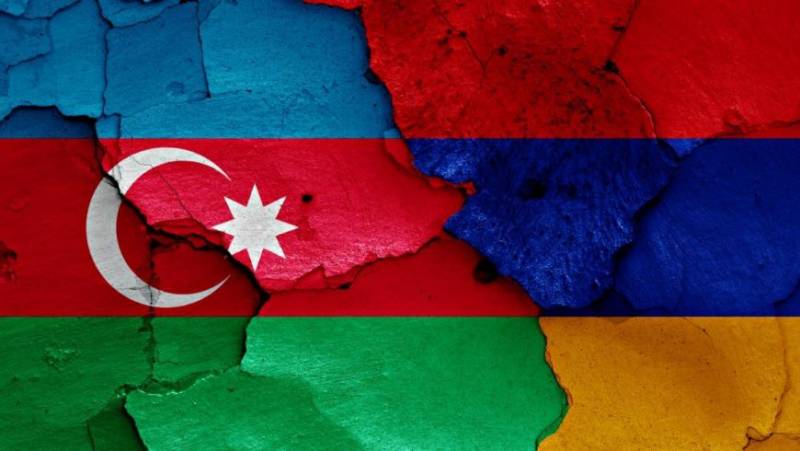 To win back, but not to recognize

Armenian Prime Minister Nikol Pashinyan was clearly belated with the statement that the world (which can be called “obscene”, like Brest,) allowed the Armenians to keep Stepanakert. After all, relying on political, let alone military support from abroad did not come true much earlier.

Now Pashinyan is making excuses to his compatriots:

“If the hostilities continued, there was a very high probability that Stepanakert, Martuni, Askeran would have fallen. Subsequently, thousands of our soldiers could be surrounded, that is, there would be a collapse. We were forced to sign this agreement ”. 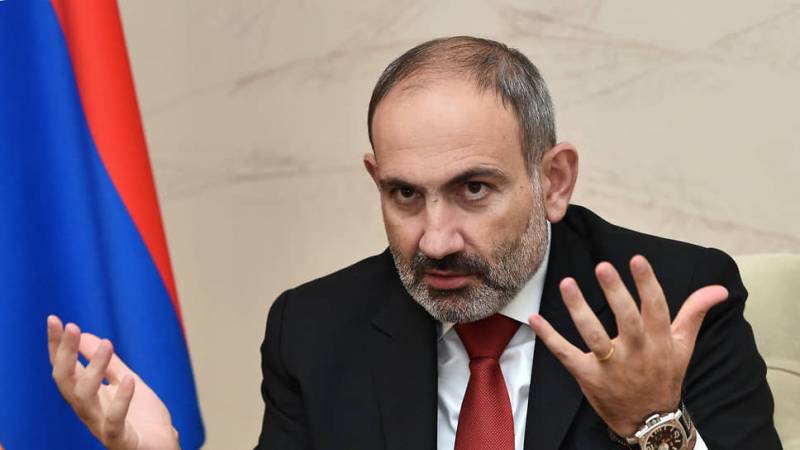 Official Yerevan, the capital of a small country that has become as limitedly independent as many former Soviet republics, has prepared a Karabakh trap for itself many years ago. Trying to retain the opportunity to take as allies whoever they want and when they want, Armenian politicians did not dare to go for direct recognition of the Nagorno-Karabakh Republic.

Thus, they actually left both NKR and the whole of Armenia in limbo, with its close ties with highly influential national diasporas around the world. In the case of Karabakh, this is not the first time, as one historian noted:

"The right to self-determination of one people clashed with the right of another - to preserve territorial integrity."
The fact that Baku could not recognize the Nagorno-Karabakh Republic (along with Stepanakert's right to self-determination) is quite understandable. Even in spite of the fact that historically the Armenian population predominated in Karabakh. But mainly under the control of Azerbaijani officials.

However, it is unlikely that this was the cause of the Armenian-Azerbaijani aggravation in the 90s. And hardly even the repressions of Baku and the Armenian pogroms, including in the Azerbaijani capital, were the reason.

But the non-recognition of the NKR by the official Yerevan (into which the obviously drawn-out "process of recognition" has turned into), perhaps, is the main reason for everything that Transcaucasia has today.

Karabakh has always aspired to Armenia. In about the same way as Cyprus has always strived to Greece, and Transnistria, Ossetia with Abkhazia, Crimea and Donbass - to Russia.

Memory of the first blockade


And everywhere, as we can see, we are talking about non-recognition or partial recognition of the very right of peoples to self-determination. "Anything is possible" turned out to be only for the Albanian separatists of Kosovo, but today's trial with Khachim Tashi confirms that in this case, too, a straightforward national division cannot be easily pulled off.

Not much has changed when Karabakh has already de facto got out of Baku's control (and not without the participation of volunteers, including Russian ones, in the battles of that war on both sides of the front). By that time, the Azerbaijani OMON managed to catch hold of the settlements, the inhabitants of which were Azerbaijanis.

Even then, the first "blockade of Karabakh" took place. Even the intervention of the presidents of Russia and Kazakhstan, Yeltsin and Nazarbayev, did not help. More than a quarter of a century that has passed since then, Azerbaijan has not only accumulated strength. But he was clearly waiting for the moment when neither Yerevan, nor Moscow, nor even Paris would definitely help Stepanakert. 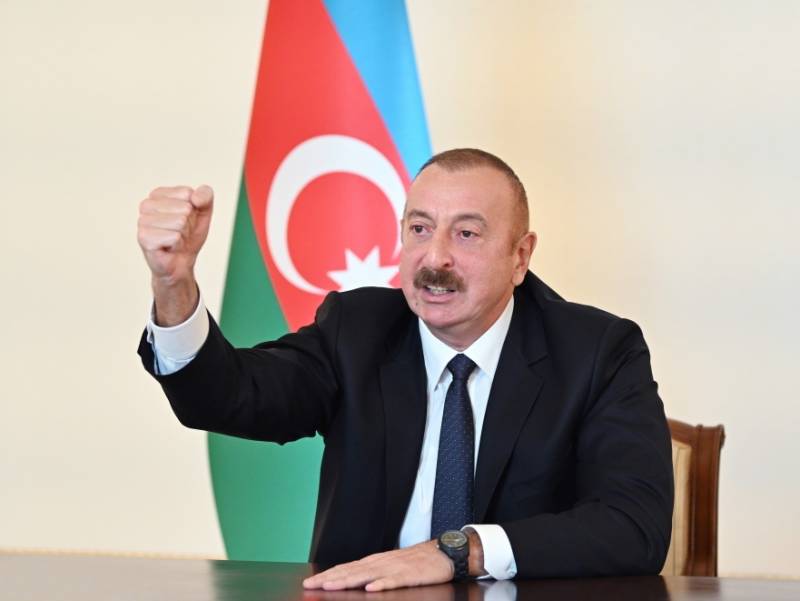 But many helped Ilham Aliyev (of course, to the extent of their dubious political adequacy). The mere fact that both Russian and Turkish leaders participated in the reconciliation of the parties does not change anything, in fact.

In the end, the absolutely ill-considered policy of Yerevan towards Nagorno-Karabakh simply ensured its complete fiasco. Sooner or later, the very fact of Yerevan's refusal to officially recognize the self-proclaimed "NKR" should have led to this.

Even in the context of the recent hostilities there, the position of official Yerevan showed that for Armenian politicians (moreover, regardless of their political convictions), this region has for many years been a kind of "safety cushion" for their own political consistency.

The stake on Russia, as well as integration structures (in which official Baku could well be present in parallel) worked, as we see, exactly the opposite. Although over time, a lot can change here (almost instantly).

In any case, everything (what is happening in Yerevan immediately after the declaration of peace) once again confirms this assessment. But in Yerevan (and as a direct consequence - in Stepanakert) for some reason they believed that the CSTO and especially Russia were about to "rush" into battle for the same region, which was not officially recognized by Armenia ...

It is impossible not to remind here (by the way or not entirely) that, appealing for support from the Russian Federation, Yerevan politicians still refuse to liquidate the biological laboratories operating in the country since the early 2000s. In fact, they are American, and this is not even too veiled.

Their dubious "safety", as well as the legality of the research and experiments there, was more than once officially noted by the Russian side. But so far Moscow has limited itself to this. It is very characteristic that all this is happening with the complete silence of official Moscow in relation to Armenia - a member state of the CSTO and the EAEU.

However, few observers draw on this basis the conclusion that such a not entirely political factor could really affect the position of Russia in connection with the current military conflict.

Moscow, most likely, did not particularly focus its attention on the activities of these laboratories, in view of the notorious political "maneuvers" of Nikol Pashinyan and his predecessors towards the United States and the West in general. But it somehow played its role in the current (quite obviously “not pro-Armenian”) outcome of the confrontation.

With the beginning of a concrete dialogue with Azerbaijan, official Yerevan was also clearly late. It is possible that even at the start of the military phase of the conflict, the unblocking of the so-called “Transcaucasian Transsib” could be a reasonable “primary” move by Armenia. 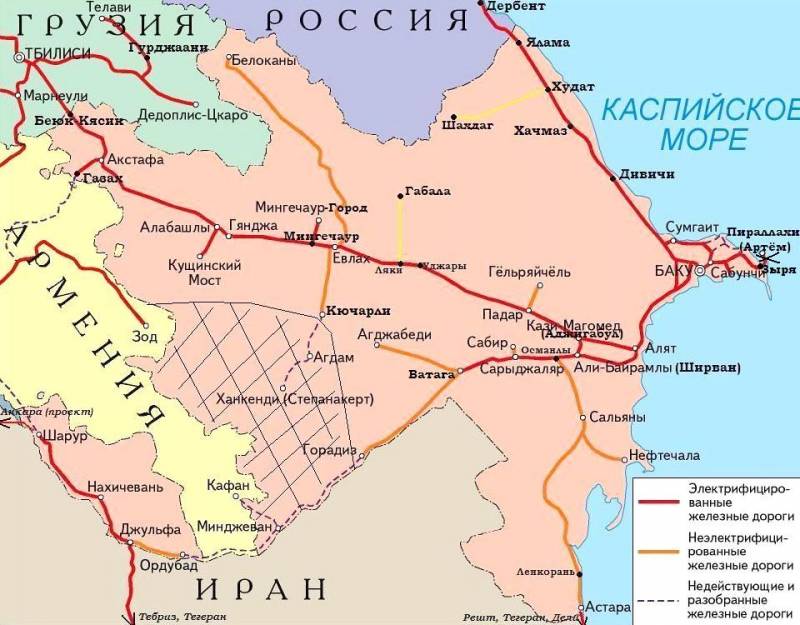 This highway, which was built by the middle of 1912, once connected the ports of Batumi and Poti with the Georgian capital Tbilisi, Armenian Gyumri (formerly Leninakan) and Yerevan. From there, the route continued along the route: Norashen - Nakhichevan - Julfa - Ordubad - Meghri - Mindzhevan - Horadiz - Vataga - Imishli - Osmanli - Alat. Finally, the finishing point was Baku.

It is, of course, not easy to restart the entire highway. But to begin with, we can talk about unblocking the railway between Nakhichevan and the rest of Azerbaijan. As you know, it goes through the towns of Meghri and Agarak in southern Armenia and has access to Iran.

The Russian Empire and the USSR had a railway exit to Iran from this road. By 1942, the final section from Julfa from Georgia through Armenia and the Nakhichevan autonomy directly to Baku was laid on the 750-kilometer route of the "Transcaucasian Transsib".

According to current agreements, this artery (inactive since 1991) must be unblocked. That, among other things, will restore direct railway communication between Russia and Iran through Azerbaijan. But for some reason, the same agreements do not include the abolition by Turkey of the transport blockade of Armenia, which has not stopped since 1993.

Nevertheless, the opening of an artery capable of linking together Azerbaijani territories could not only become a demonstration of "goodwill", but would also resolve a number of problems of the country, which has now become an almost irreconcilable enemy of Armenia. This step (according to available information) could well lead to the lifting of the transport blockade of Armenia by Azerbaijan and Turkey.

The cancellation by Yerevan and Stepanakert of the dubious "abolition" of five miniature Azerbaijani regions in the former autonomy, which were directly subordinate to Baku, could also reduce the degree of tension, and ahead of it.

After all, in addition, a considerable number of Azerbaijani regions adjacent to Karabakh were actually occupied by Armenian troops. This was done under the pretext of a certain "guarantee buffer" of security for the same NKR. Therefore, now Yerevan should not be very surprised that everyone in Baku is so happy about the "liberation" of some previously occupied lands.