Special report. The grief of the vanquished

November 10, 2020
196
On the night of November 10, the government of the Republic of Armenia, headed by its Prime Minister Nikola Pashinyan, signed an agreement on the surrender of the army of Nagorno-Karabakh.


A few days ago, in their press releases, the NKR command reported that they were holding Shushi, that stubborn and fierce battles were going on on the outskirts of this fortified city, and rumors about the capture of it under the control of the Azerbaijani army are absolutely false.

The surrender agreement published by Nikol Pashinyan on his Facebook page came as a shock to the people of Armenia. Immediately after this, a spontaneous rally began in Yerevan with pogroms of the Government and Parliament buildings, the slogans of which were the displacement of the current government, the abolition of surrender and the election of a new command ready for military operations.

Two o'clock in the morning. A huge crowd of people begins to flock to the central square of the Republic. 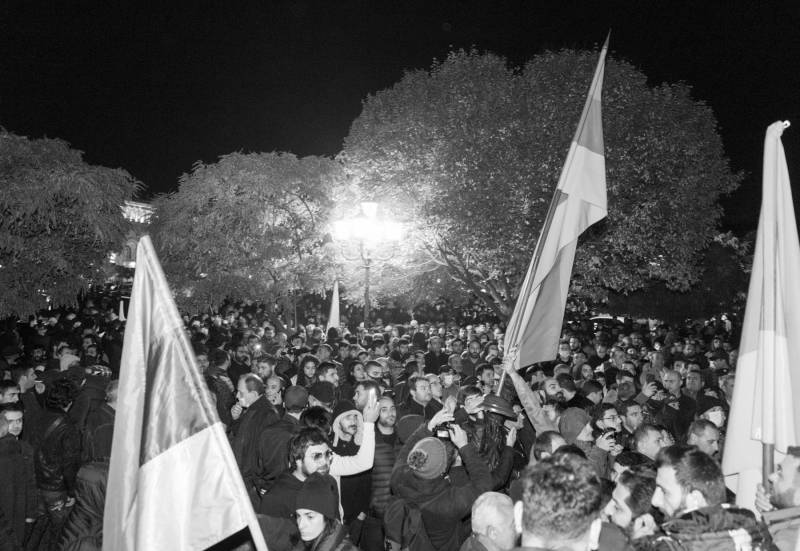 Residents of Yerevan urge everyone to go out into the street and follow them to the Pashinyan Residence, so that all their questions can be answered there. Slogans are heard in the crowd:

- DO NOT RENT ARTSAKH!

- GIVE POWER TO THE MILITARY!

The police and soldiers at this time stand on the sidelines and do not seem to know what to do. It seems that now they all fully support the protesters. 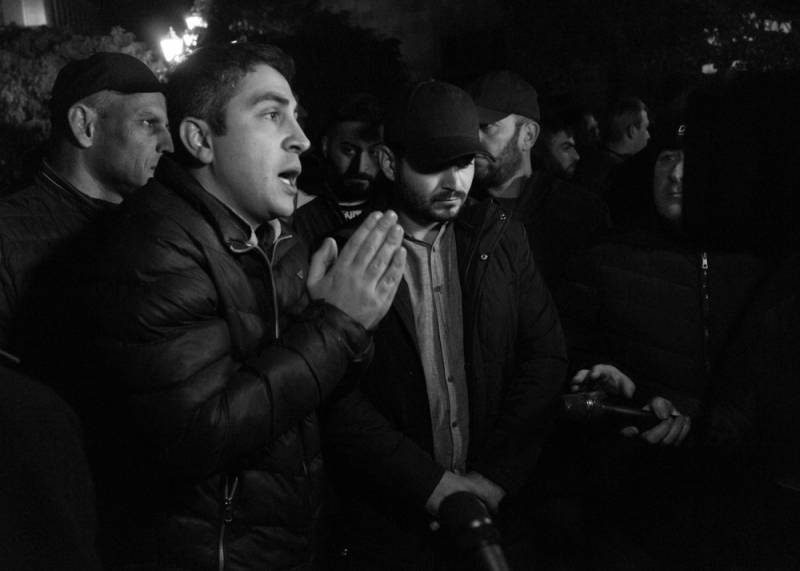 Suddenly, a huge cobblestone flies overhead and hits the door of the Government. The glass shatters into small pieces. People begin to smash the main doors and windows and climb inside. Someone asks everyone to calm down and not break furniture.

The crowd rises to the upper floors, trashing the main hall and the prime minister's office. Inside, TV people rush behind the crowd, filming everything on TV cameras. Now one, now another Yerevan citizen, getting into the frame, begins to speak, breaking into a wheeze, about what they should do. 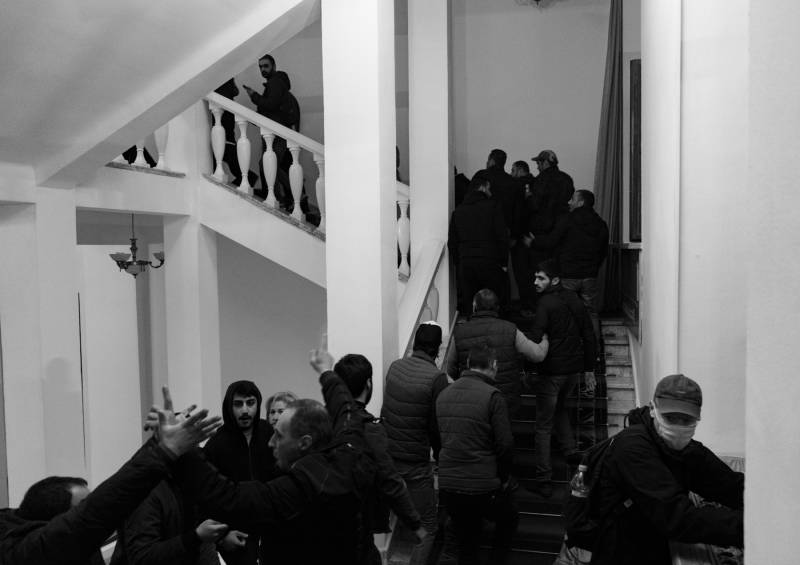 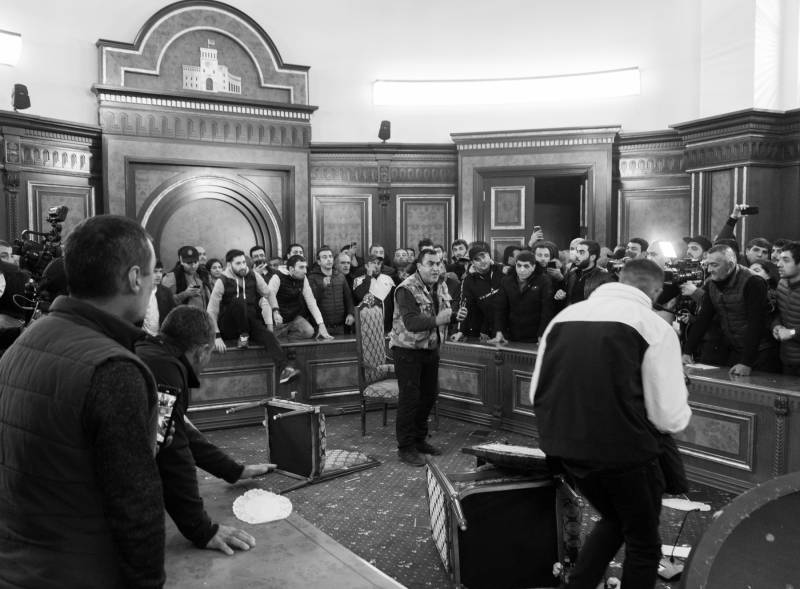 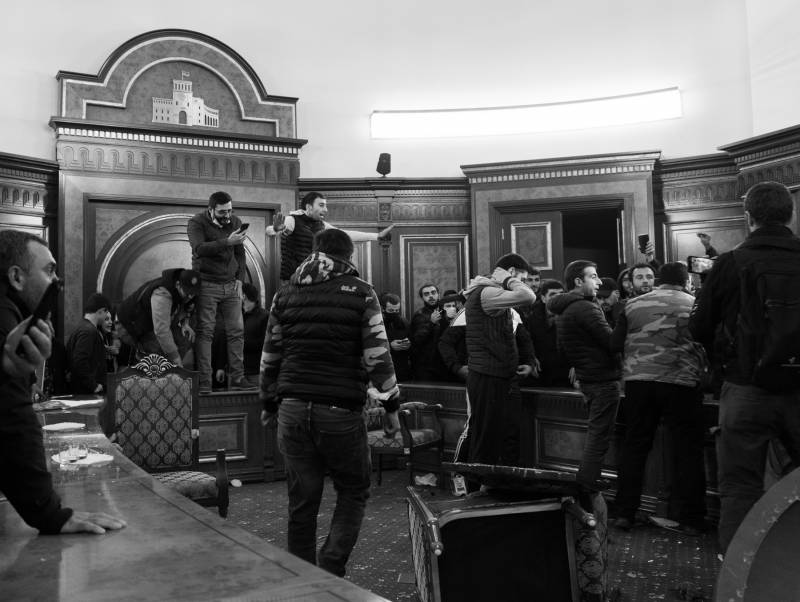 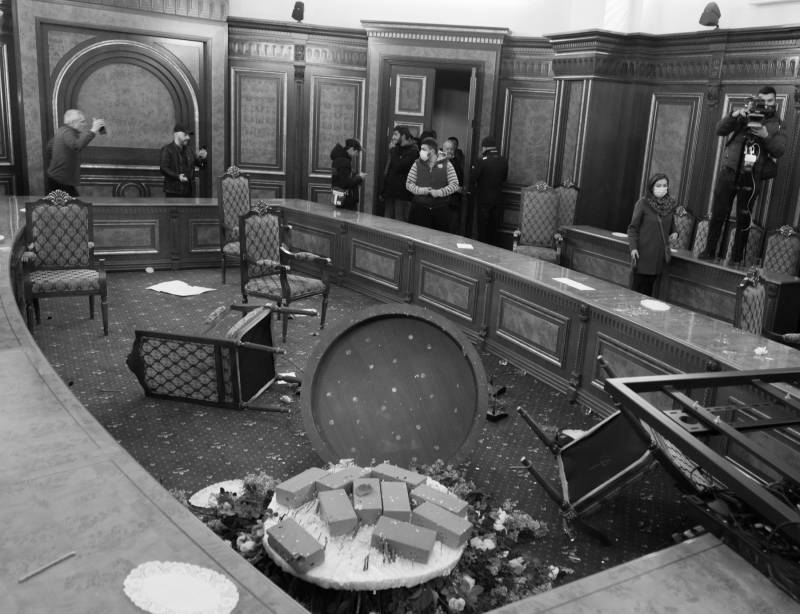 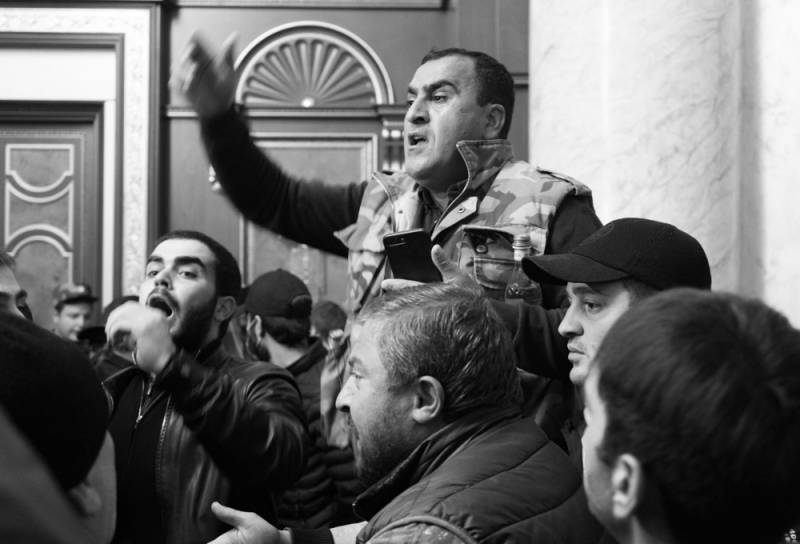 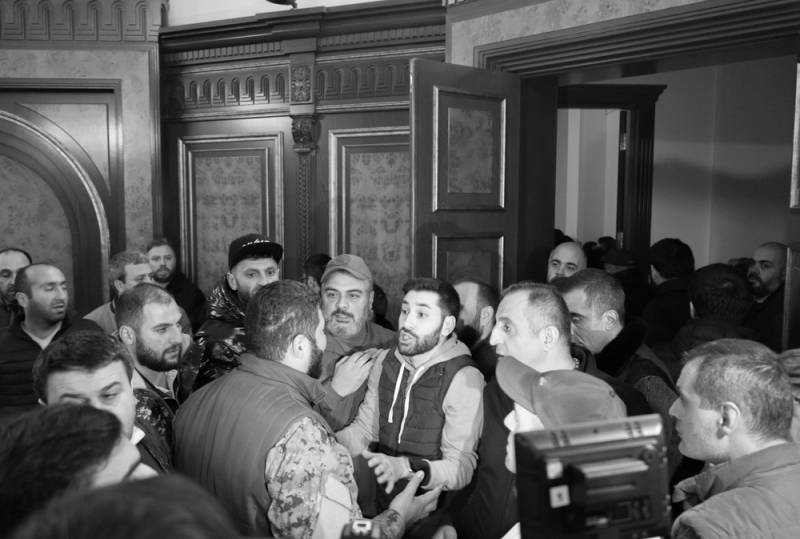 Nobody supports Pashinyan in this crowd.

Suddenly, a woman stands up on the table and loudly asks everyone not to blame the Prime Minister. He did everything in his power. She is politely ignored. 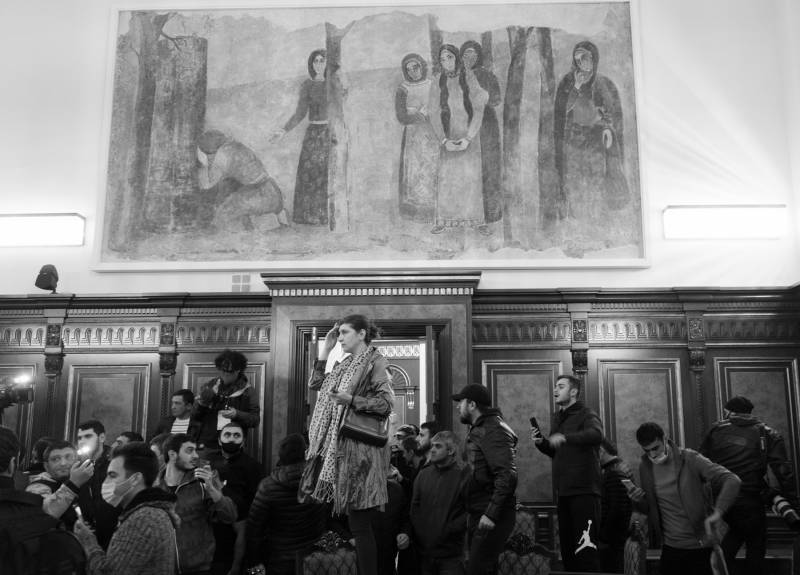 The entire government building is seething and bubbling from within. Here and there crowds of people gather, waving the flags of Armenia. They shout slogans and propose to introduce a new procedure. Change government and refuse entry of peacekeepers. Gradually, the crowd leaves the building and returns to the square. Someone was able to get the loudspeakers and now handed them to people so that they could be heard: 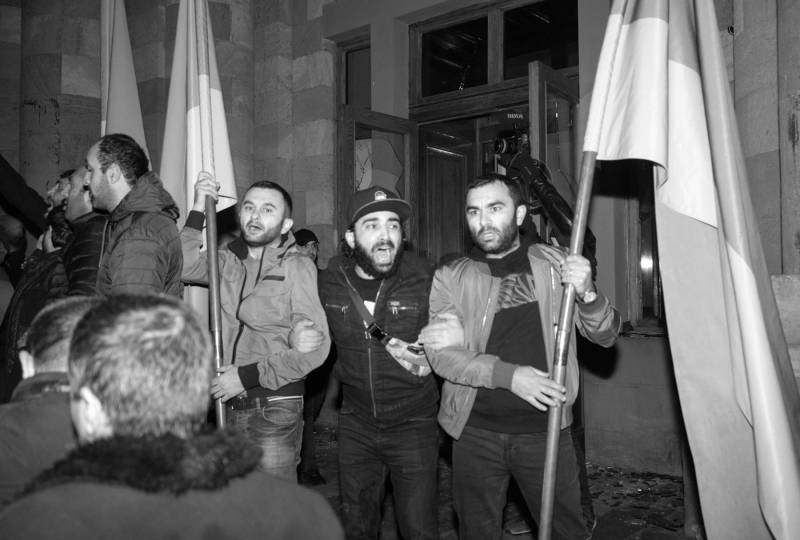 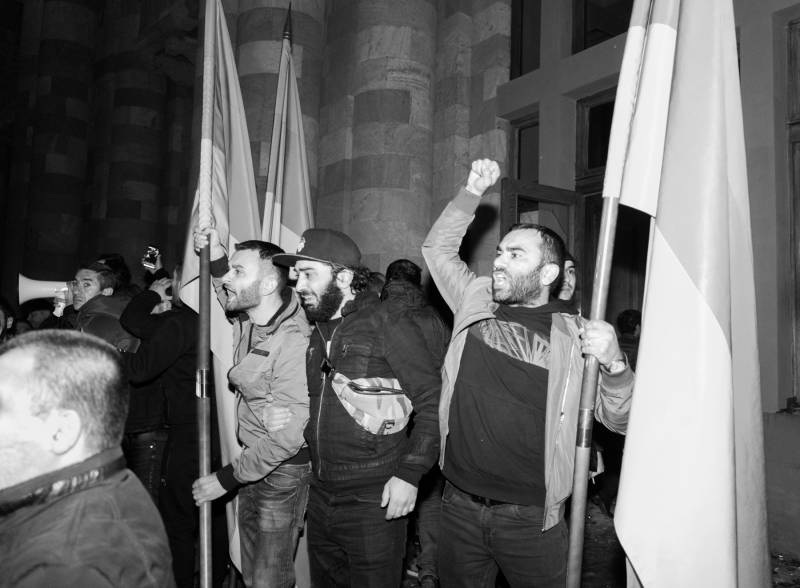 The main doors of the Government building are smashed, and fragments are strewn across the floor. Five photographers, taking turns, photographed the same broken window for their publishing houses.

- The government has betrayed its people! We chose him, and he betrayed us! Where is he now? Why isn't he with us? Why isn't he in Yerevan? Where did he go?

A thought slips through my head - how many men there are suitable for military service. Why didn't they go to Karabakh earlier? Then when they began to appear news about the capture of Hadrut. When did the enemy cross the plains and came close to the heart of Karabakh? When did he start attacking Shushi and surrounding areas?

Maybe because the Armenian government sometimes preferred to promote the successes of its military campaign, rather than its defeat, from which it was possible to draw conclusions? Right now, people in Yerevan seem to have woken up from a ladle of boiling water. So things were that bad? Why did our sons die?

The square was simply seething with questions that no one could answer. More precisely, there were no people who could and had the right to answer. 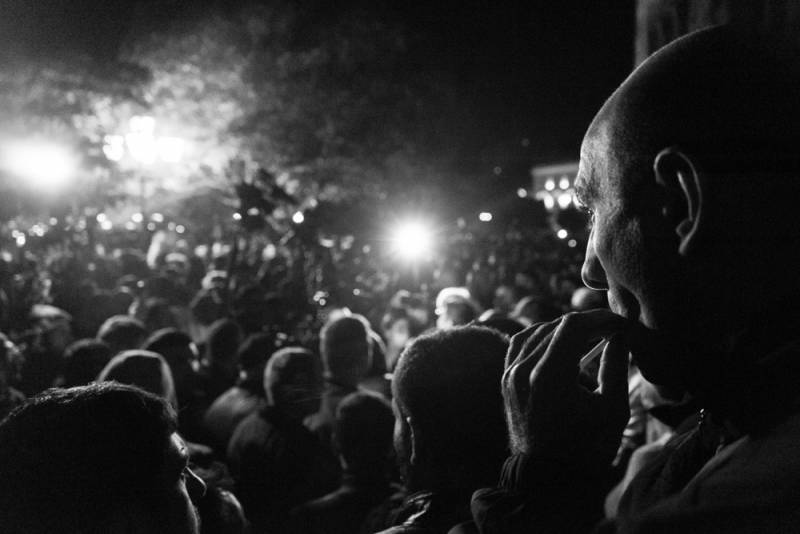 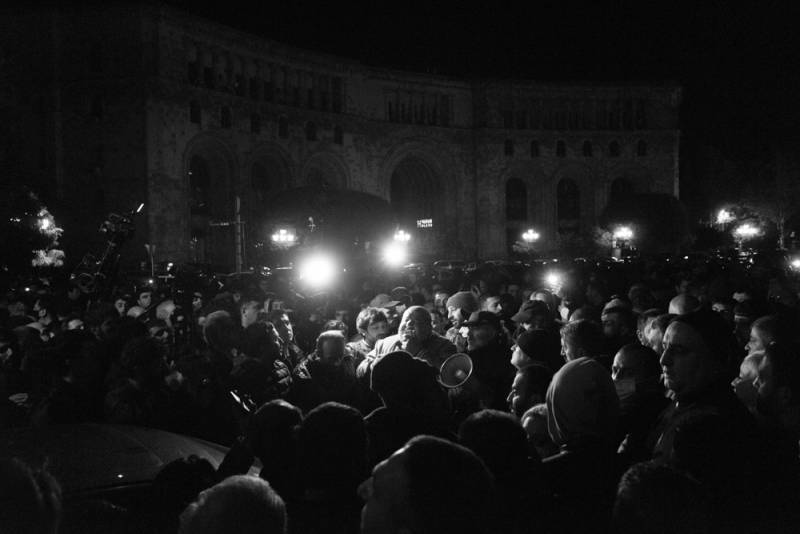 A week ago, when I was brought to the police station at night to check for "espionage" and "sabotage activities," the servicemen, sitting opposite, talked about how they would still have time to reach Baku. Like every 30 years they fight for this land, and every 30 years they throw the enemy back. If only the enemy did not get secret military information.

I was able to see for myself that the NKR army has enough professional and brave soldiers, skillful commanders who are ready to fight until their last breath. Young heroes fighting for their homeland. I also managed to meet 4 people who all wanted to go to war in a few days, but they never went anywhere. And they all believed that things at the front were going in their favor. With difficulty, with losses, but adding up.

Why was the center of Artsakh, its most fortified part, consisting entirely of mountains and gorges, was taken so quickly? Why on November 8, the NKR command reported in official sources that Shushi was still standing and defending itself, and now Arayik Harutyunyan says that the city was lost on the 7th? And on November 5, there was already an enemy on its outskirts.

Why hasn't Armenia turned into a military camp to support Artsakh since the beginning of the war? Why didn't the Armenian army take a single step to help?

All these questions are now hanging in the heated Yerevan air.

I also ask questions. I have the right to do this, because I myself have answered the question dozens of times why Russia does not help Armenia.

I ask a man who is already hoarse from screaming. I wonder why he scolds Pashinyan so violently. 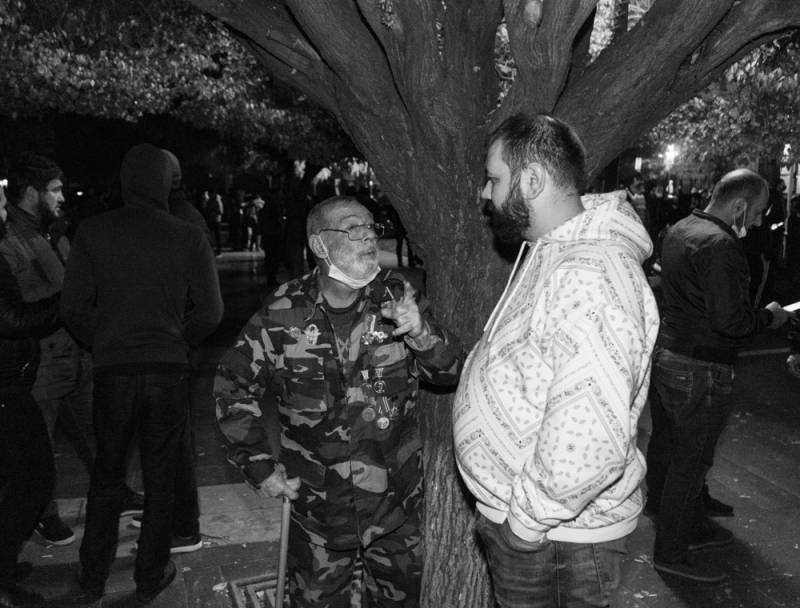 - I have two sons at the front in Stepanakert now.

- How long have they been fighting there?

- Since the beginning of the war. They had already served three months before, because they were conscripts. Everyone was given a paper - whether you agree to fight in Artsakh or not. If you sign, you go to the front. They signed, of course.

- Is there any of the soldiers who came from there in the crowd?

- No, but many have friends in Karabakh now. And they say that you can continue to fight. That everything is not so bad, and they are able to do it. Many territories are under our control.

Our conversation is interrupted by another man:

“Two of my brothers died in this war! he shouts. - My cousin and nephew. Now lie in the ground. Why did they die? For what? Have you seen how many people died? How many of them actually died? Thousands? If Pashinyan was ready to lose immediately, why would these people die? You understand!? We are ready to fight on! ... (Down with) Pashinyan. ... (Down with) him. He signed the agreement!

A man in uniform is being carried out of the government building. It seems he felt bad. They put him on the hood of the car and call an ambulance. In those seconds when he wakes up, he grabs his head and says something in Armenian. 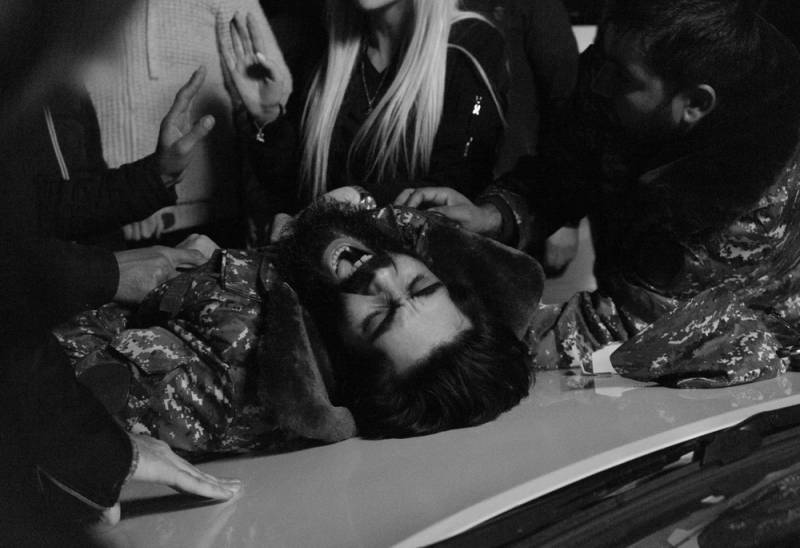 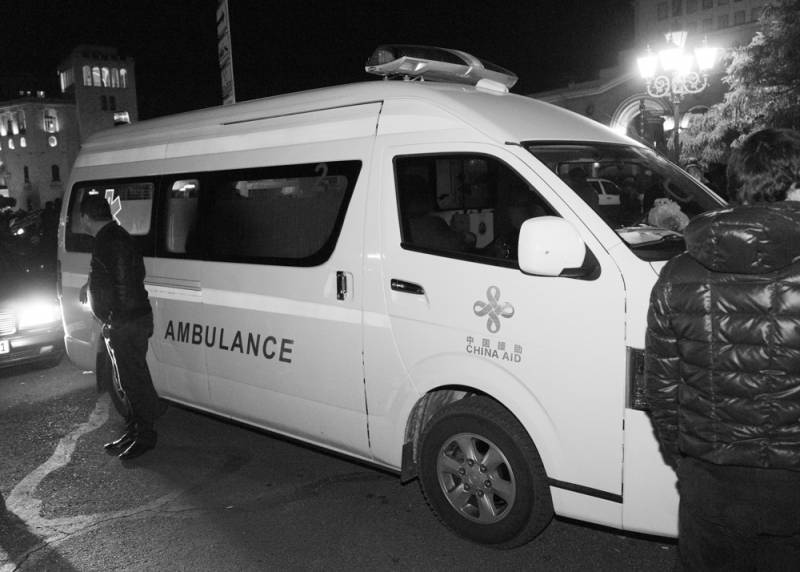 Politicians and ordinary people from the crowd begin to appear on the podium. They propose to remove the government and give power to the military. They are considering all the options that can save Artsakh.

Protesters are discussing how the agreement signed by Nikol Pashinyan can be canceled.

One of the Republican Party members climbs onto the roof of the car and starts talking into the loudspeaker. The father of two sons explains that he spent a month in the war. He proposes to transfer power to another party and continue to fight for Artsakh. 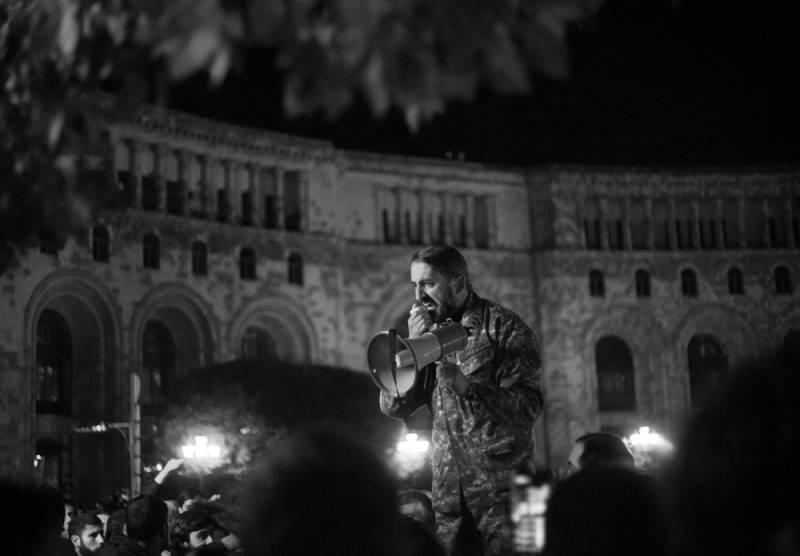 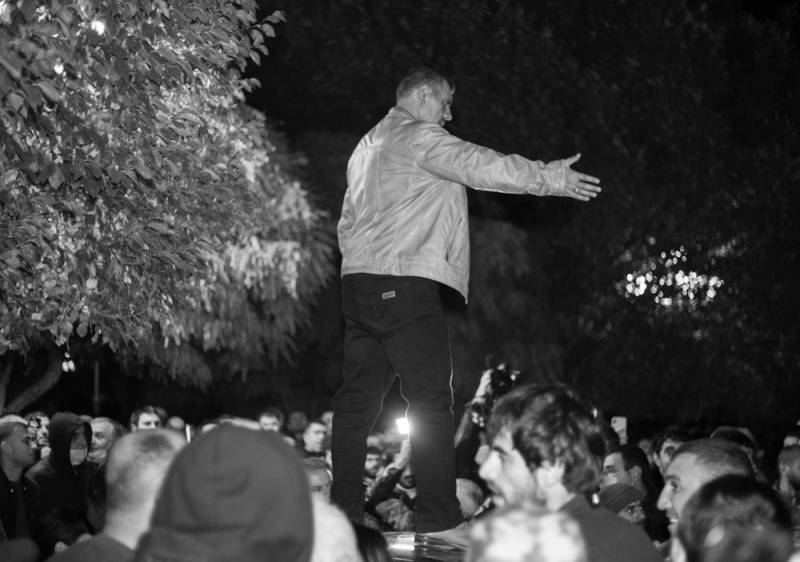 Some of the protesters decide to head to the Parliament building. Leading out in a large column, they walk the streets up Yerevan. The city center is filled with the sounds of loudspeakers. Observers are asked to come down from the balconies and follow them. Behind the back of the column of people, a traffic jam of signaling cars is gathering. 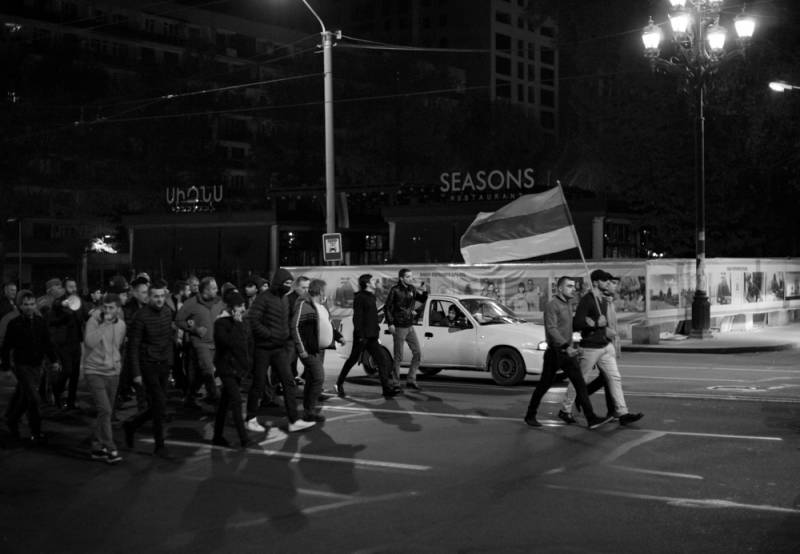 But this does not really change anything. The documents have been signed, and in them one gets the victory, others are doomed to the bitterness of defeat.

The war in Nagorno-Karabakh lasted 44 days. There is no doubt that this conflict has already reshaped the modern military-political picture of Transcaucasia.

Both sides lost their sons in this bitter war, and these losses are calculated in greater numbers than those indicated in the official reports.

From that day on, two peacekeeping forces enter the territory of Artsakh, which means that the Second Karabakh war has come to an end.

But no one knows what may happen in this region in five years, when the peacekeepers again leave this high-mountainous rocky land, abundantly watered with the blood of both sides.